Fema style cant get a flare

hello
doug here north idaho, ive been reading about the topic for a couple years and just got my first fema style built. i think i did every thing right but i cant get a flare . ran with the blower for about 20 or 25 minutes, everything seemed hot but couldnt get a flare . the only negative i noticed was lots of moisture . i collected about a cup in that time frame and also getting drops of water out of the blower too. not sure how to upload pics . would love any input i can get

With out going into a lot of questions on what you did or didn’t do, to pinpoint the exact problem. let me just say, "that is the results you get with a FEMA gasifier. Water and tar. I don’t think you are going to find one person on here who hasn’t tried a FEMA or know someone who did. Pass on it and do more studying and come up with another program to start with. TomC

ok what is the cheapest and easiest way to convert a fema to a style that will work better ?

First, welcome to the site. You’ve found the best place to get answers to your woodgas questions.

Cheapest and easiest is not the best philosophy to bring to gasification, as you’re already finding out… Let’s rephrase the question a couple ways.

“What can I salvage from the FEMA build?”

Gas cooler, any filter units, possibly the outer container. Depends on how well it was built. Beyond that it’s probably good as scrap to be recycled as you build other things.

Start by stating your goal. For getting your feet wet, try a charcoal Simple-Fire. For a small engine by-the-numbers book of plans, I actually recommend Ben Peterson’s book. For a vehicle gasifier, follow Wayne Keith’s system. If your goal happened to be a wood powered motorhome for cross country vacations, I would have some discouraging remarks.

But, we don’t know until you tell us… what do you want to do?

Second question, what is your fuel supply?

Hello Doug,
Are you using pellets or local dry wood? If you are up around Sandpoint, I imagine there is already a wood stove going in the house. Maybe place some pans of little wood cubes so they can get dried out. especially if the flare won’t light because it contains too much water vapor. Here is a link to a page describing the start up procedure for a FEMA unit.
http://buildagasifier.com/?page_id=122
He is using store bought wood pellets. Also notice the low velocity of the air exiting the flare tube, which may be just about right for the small generator he is running.
Hope this helps. Ray

Doug, on the same site, there is a page called “troubleshooting”, and the first topic is, “My Gas won’t light/flare”. Besides the wet wood or fan speed conditions, the major problem is air leaks. See http://buildagasifier.com/?page_id=290

One thing that I didn’t see in that guy’s troubleshooting section was to examine the size of the fuel chunks. I have a stratified downdraft gasifier and it won’t work at all with wood chunks of the size used in a Wayne Keith gasifier. I need much smaller material to produce a COMPLETE bed of glowing charcoal that the incoming combustion gases HAVE to go through to get converted to CO.
Sure, I can get a fire going with big chunks but I am not producing any CO and probably no H2, either. That’s because the combustion gases simply flow around the glowing chunks down on the grate.

thanks for the replies . yes i am chunking my own wood finding out its probly too big and too wet . im gonna buy some wood pettets and try that tonight . also i turned my blower around and covered my burn tube opening to check for smoke coming out of any leaks . any other ideas to check for leaks ? i live about 50 miles south of sandpoint in post falls idaho home of top ranked high school wrestling.

Hi Doug, we have a Member that lives in Sandpoint, he has a wood Gasifier Truck. I will try to find out his name for you. Might not be active on the site right now. And welcome to the Greatest wood gasification site on the Web.
Bob

Hi again Doug, Ron H. Just search his name and you can go to his profile page.
Bob

Hi Doug,
I agree with Pete and glad you do too, about size and moisture content of fuel. Did you find (and fix) any leaks in the shell, etc. Sucking air into the gas before it exits the gasifier body(shell) will make it an explosive mixture from the exit tube back to the gasifier body. Also, I’m not sure how good a char base the pellets will form versus burning wood for a char base… The glowing char base(which will build up on the grate) is where the chemical reactions take place turning the combustion gases ( carbon dioxide and water vapor) into the burnable gases (carbon monoxide, hydrogen and methane). All these burnable gases may or may not be present, but carbon monoxide (orange flame) will be the most likely present gas. Hydrogen burns with a blue flame. If the temperature of the char bed doesn’t get hot enough then the combustion gases will simply pass through unchanged as carbon dioxide and water vapor(steam). This is probably what you are experiencing. Another note is the velocity that you pull (or push) the gas through the system. You need a velocity that will maintain that high temp to enable the chemical reactions to produce the burnable gases.
Hope this helps and you can understand it as I have explained it. Have any questions, ask away, we’ve all been there.
My first build was the FEMA here. Yeah, I spent a lot of time on this thinking it was the end of the line. Lol, I finally caught up with my reading and found out it was just the beginning of a long journey to a gas that would power an ICE. Good luck with your project and don’t get discouraged, there’s a lot of help here. Try to get the hang of uploading pics here.
Here’s a vid of my FEMA. Yeah it’s fancy, so to speak, but at that time I thought the Fema was the real answer to wood gasification, it’s not. It’s a neat experiment, but don’t spend too much time there. Notice that some water still present in the nozzle even though I have a burnable gas. I moved on to an imbert design inspired by the GEK design.
Pepe 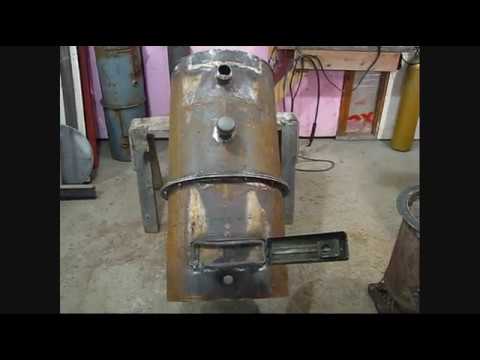 Hey Doug,
Speaking of pellet derived woodgas, I ran across this vid quite a while back and it doesn’t look that complicated to build except for the cone.
Pepe

Dont get fooled by the looks, its a tar maker. This is what l tarred up my first engine with. Kind of sad as its such a simple and cheap design…

Hi doug I don’t think anyone has asked yet; what are your goals for the gasifier? Very few people have made a fema work well and consistently for engines but if you just want heat and experimentation it can work. A few questions: did you put charcoal in it before the first firing to establish the char bed? Next what size is the restriction and finally what are you using as a blower?
Thanks David Baillie

wow thank you guys so much for all the feedback . i got a lot of my build info from josh burke i think his name is . his videos show a great looking fema. super simple build . seems to burn very clean and he has hours and hours on his small engines . anyway id like to run my 6 hp woodsplitter and also a backup 6 to 8 hp generator . i have a 30 gallon barrel with a 6 inch dia. burn tube 16 inches long dropping on to a bowl style grate at the bottom . no reducer on the burn tube .then a 5 gallon propane tank for my cyclone with a jar at the botton to catch moisture . then a 25 foot copper pipe for cooling .then my sawdust filter with another jar under it . how do i up load pics to this site . im deffinitely tech dumb

Hi Doug , I also watched many of josh’s video’s and saw his nice blue flame ect , and thought seems easy enough so I shall try that , that was my second wood gasifier I built , the first being the G3 mentioned above , on the G3 I struggled keeping decent gas because the cone was not perfect and needed turning a lot to move the ash through the gap , the second attempt was a Fema like josh’s, I did manage to get that to run engines and didn’t get much tar or condensate from my runs , but again it was not a light it and walk away system .
I now use a charcoal Gasifier just for running engines up to about 500cc on different types of generators and engines for battery bank chargers and power tools , for me its a simple light it start it and walk away 99% of the time no problems , I am lucky as I use wood to heat my house and so every time I refill my wood burning fire in the house I take out about a gallon of charcoal from the bottom and it keeps me in free fuel to run my generator .
Dave

ok so the g3 sounds like a good design to build . is that the consensus here ? and where do i find plans to build it ?

hi michael id love to talk more and even give you a visit to see your setup sometime . where did you wrestle in college ?

G3 is great for start and geting your feet wet, easy to make and cheap. Great for flareing and stuff, but pteety useless for engine powering. Its a tar maker.