Filter Design and Descussion for Gasifiers

Hi all, here is place to talk about, and show off your designs on filters, or have found elsewhere for Gasifiers. You can place them here again if you like. Feel free to use this thread topic. It’s for everyone to use.
Bob 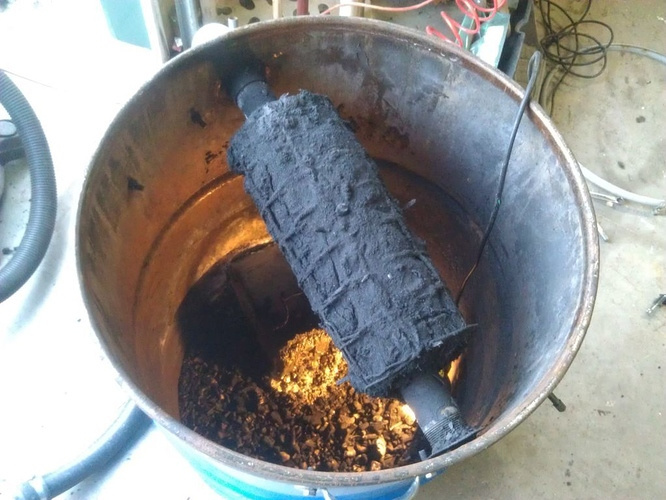 How about this one on dan’s Chevy Lumina.

Another excerpt from an old post:
My local fabric store, JoAnn Fabrics, has lots of good filter media: foam rubber in all sizes, fibrous pads for seating and great pillow stuffing. Fiberglass will work. Charcoal granules work great too. I use pieces that pass through 1/8, but won’t pass window screen. Discovered this in an old gasifier patent. Charcoal can be several inches deep with very little resistance to flow. The old patent has a rotating rake to recondition the surface when it becomes caked. I use a sheet of uni foam filter to support the bed of charcoal. http://www.amazon.com/Uni-Filter-65-PPI-Green-Fine/dp/B000ONZT5E/ref=sr_1_2?ie=UTF8&qid=1460156849&sr=8-2&keywords=uni+foam+filter9

Troy MartzSep 15
Perlite (course sizing) works excellent, and can be reused… Not sure about biomass gasification, but for charcoal gasification, it’s a top-notch particulate filter.

The primary purpose of the cooler is to capture moisture. My filter is a pleated paper spa filter covered with oiled Unifoam filter material. I want avoid moisture fouling of my filter so I am cooling, coalescing vapor on SS scouring pad and using Silica Gel to remove as much moisture as possible before the filter. The filter has a very large surface area, so the cooler is probably overkill.

Hi Bruce, just say the word and it’s done, LOL
The filter thread I’m looking for has like five bike wheels together and fiberglass welding blanket around it and then it is tied between the wheels down by the axle parts and then it is tied off on one and the other end has a pipe that was cut to go between the spokes and the bag tie off around it.
It might have been @gasman Max that posted it. Still looking for it. Thanks for the posts and where to find them.
That one of Dan’s worked but I think he had problems with it plugging up when driving. The one I’m talking about would work great in the large barrow. This just gave me a new Idea on a simple fire I am also working on to put on the back of my motor home for my Genset. 4kw Onan. Thanks.
Bob

I think the hot filrlter designs talk you are looking for was in Leitinger wood gasifier thread.

Thanks Kristijan, I should looked in your thread first.
Bob

I think this may be what you are looking for. It´s in Swedish, but you get the picture.

I put this link in a different thread a while back, but I don´t remember where. I looked in Kristijan´s but didn´t find it.

This filter is housed in a horisontally placed propane bottle (link below) and it has plugs on top to blow the filter clean with compressed air. Johan Linell used a simular setup on his old Volvo back in 2007. As long as the gas doesn´t contain to much moisture (dry wood and/or good monorator effect) the filter is said to be somewhat self cleaning - soot falls off down into a dump.

Thank you Jan-Ola, that 's the one I was looking for. I translated it to English and book mark the website, should have done it this way instead of book marking your thread. I have way to many book marks on this DOW site. But they are all good ones.
Bob

Jan-Ola, for filtering a charcoal gasifier I think it would work great not a lot of moisture in the gas, not like wood gasification.
Bob

Fantastic work… You may win the “most bang for your buck” award. A+++

I second the notion from Gary. Our cyclone filter has EASILY been the most impressive component of our system. It has kept our media filter as clean as a whistle. We are still amazed at the physics behind the darned thing.

If you don’t want to fabricate your own, Stephen Abbadessa sells cyclone filters for wood gassers on his website: http://northernselfreliance.com/get-the-nsr-hardware/cyclone-dust-filter/4

Here is an idea, If you introduce steam into your cooler in addition with the gas. Theoretically, you should get an increased cooling effect with greater condensing. Just thinking out loud.

Has anyone used vinegar on tar? Im going to experiment with a silicon fabric bag filter and want to flood it with a solution for self cleaning. But will need a good solvent that will not foam up. This fabric will hold up to acids and corrosive solutions. So interested in any that will readily dissolve tar.

One thing Im going to try is liquid dish washing machine detergent. If your looking for an industrial cleaner mix this with water and put it in a spray bottle. Be careful though there is a reason its not already in a spray bottle for consumer.

The only thing I could get the tar off of the roof of the Ranger was acetone.

I was thinking that someone has mentioned that a product called “Totally Awesome” or “Totally Awesome Orange” will cut tar, but I haven’t tried it. That product is available from Dollar Tree and other places.

There is some stuff called purple power and it is the best I have found. I also have “Awesome” and it is not near as good as the purple power. You can find this at just about any Autozone.

The problem with both of these is they will foam as I am recirculating the solvents. With this bag filter idea I am going to do the same thing, but this time its not to wash the gas, its to wash the bag filter. As long as I keep it wet with this stuff it should dissolve the soots and tars keeping the bag from clogging up. I have an idea where a portion of my filter can act as a dryer to let the foam settle down for re-circulation.

Also I wanted to note the Silica Cloth is well made of silica so tars and soots will not stick to it as much especially with the purple power that stuff is pretty slimy stuff.

I don’t know if anyone else has used this , but i have a large roll of brass gauze , its very very fine woven if you look at fuel filter material in your gas tank its like that , and i use a double piece folded over in my charcoal drum and it stops so much of the fines and soot and of course will stand up well in the heat , and after every run i now just take it out and give it a bang and a blow and replace it back on top or the drum .