Fire pit and thoughts on life

I just come inside from an evening by the fire with some thoughts.

I have my own ideas about the best way to load a fire.
It involves small wood blocks of hardwood, layers of charcoal from previous fires I save, squaw wood I collect, select combinations of soft and hardwood in small sizes all in layers.
Real coal too, I like to put in handfuls of real coal ( likely from the USA where they mined in decades ago, my supplies are very very old saved from places you would expect to find coal like railway beds and bunkers near closed industrial facilities )

It takes a while to ignite…
I like a mix of saw dust with some Kerosene ( petroleum is a guilty pleasure ) and bituminous coal fines all rolled up in paper.
I wait and fan the flames until the tipping point comes and all that fuel starts to burn.

Drink my beer smell the firer and try not to listen to my wife ( she talks too much about nothing ).
I think of the steel works, smelter, foundry…

You can make a real nice fire with the materials at hand if you dig around.
A nice fire that burns hours without the need of additional fuel.
I like to watch the flame colour change from yellow to blue as the coal bed gets hotter and the VOC and sulpher burn off.
Then you get the kind of fire that burns the hair off your legs as the temperatures rise.

I use an wash machine drum and the side start to glow dull orange…
After a while all the impurities are gone and you are left with nothing but carbon and fly ash.
Fuel runs low and temperatures drop.

I put the fire out with some snow and cover.
Residual sulpher smells come back as the flame die.
I think of all those places that made all those smells and I remember what it was like when I did that job or this always with fire a its heart.

Not my intention to be poetic, after a few drinks by the fire I tend to get philosophical though.
I know its bad to burn fossil fuels and waste resources like that.

But I Iike a fire.
I like a really hellish hot fire with blue and yellow flames licking up like that.
When you get it burning just right in a wash machine drum you can create almost a TLUD effect with glorious 12 and 16 inch smokeless flames.

And the smell of fire really does bring me back to the other times and places.
I used to be disgusted by the smell of the coke batteries, burning metal of the melt deck.
Now I am nostalgic for it I think.

There’s always brush fires, though you can’t get close enough to burn the hair off your legs…

I think everyone here likes a good fire.

And kids don’t get enough exposure to fires these days… 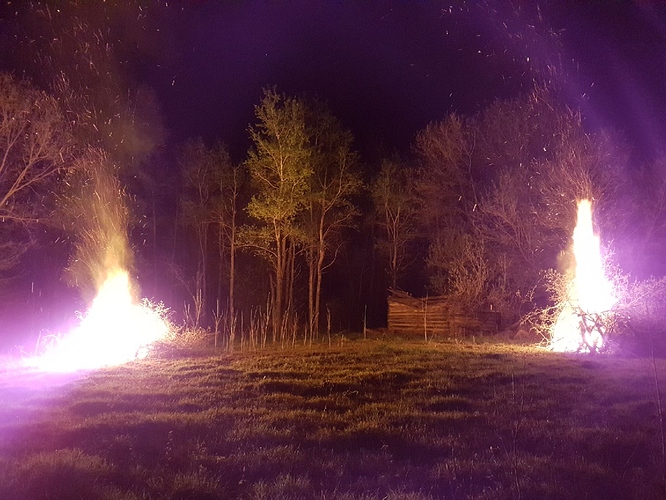 I have also observed and many times enjoyed the outsides-fires-of-life.

My epiphany came in the late 1990’s being dragged kicking and screaming $$$'s to the new secondary air cleaning burning in-house woodstoves.
Two stoves evolved from that first small front glass window’ed manufactures modified complaint Jotel 902 to our current been hard used now dutch door all glass fronted QuadraFire Royale.
For two decades now I/we have been able to ~5000 hours a year enjoy that outdoor wood burning heat glow-of-Life experiences, indoors, warming and safe.
Oversized fire box and I breakdown the following year (after needle and leafs dropping, drying) and tie up bunch and put all of my wind-harvest and tree trimmings BTU’s inside for fuels and viewing pleasure.

The oldest arthritic dogs, cats and me love bones baking inside to settled down charcoal glows out the front of our glass fronted.

Three day Feb-get-a-way at the Oregon coast last week. Snow, rain, hail w/10 minute sun breaks, more rain&wind. Baseboard electric heating in the rental riverside cabin. Warm. Yes. B-o-r-i-n-g. No bones warming to it at all. Why the old folks, knowing, in central heated sneak in plug-in red-glow element radiant heaters into their rooms. In front of their rockers.
It is so much more than just about heat energy units and efficiency percentages.
Heat-quality = Life-quality.
tree-farmer Steve Unruh

My Dad bought a Kresno wood stove that we used up into the mid 80s.
Yes it would heat the home, but it was one of those old time stove with no after burn and when you loaded it up it just turned wood into smoke.
He never got, I never got and in the end it was more cost effective to put a gas stove in.
I don’t think they think they understood much about the science of combustion.
They just made boxes called them stoves and it was up to you to get heat from it.

This brings up an interesting observation.
A chum of mine’s mother lives in a home next to his and she is about 90.
I pull into the house and see my chum and all you can smell is smoke and you can see the dark plumes of smoke bellow from her chimney.
She loads that cold steel walled firebox tight, then shuts down the air ( boiler system even worse than it sounds )

This drives my friend mad because he has to sweep that chimney all the time to remove the creosote and carry all that wood in.
It drives him crazy because as an old oil burner tech he understands you need so much air for so much fuel and its better to load the firebox light and have a smaller hotter burning fire.
But, you can’t change people…

Same fellow has a very cool " incinerator " as he calls it.
There he disposes of paper waste the recycle will not take and bits of wood not suitable to the boiler next door.
Its a very well thought out thing made of concrete pipe, fire brick and a steel grate.
It has primary and secondary ( although this was not the concept one was just meant to be an ignition port) .
This burns nicely, and I often find him warming his hands getting rid of scrap and waste with this and generating very little if any smoke.

Lighting the last stickers for the day in the kitchen kooking stove, my grandfather used to heat a pot of water. The hot water he then poured into a glass bottle, caped it and put in the bed by his feet. Every night until 93 years of age. That’s when wife and I moved in with our two small children. For 23 years we have now been kooking on that same stove daily.
Children moved out a few years back. Should I start heating bottles?
Cold feet.

When I was a boy we had this Kenmore brand Kerosene cook stove that my grandfather removed the oil unit from and made a wood box.

That provided all the warm and hot water we needed for cooking and washing dishes.
Funny you mention the water bottle because my grandfather did the same thing, he would take some the residual warm water from the stove fill a rubber bladder type hot water bottle and take it to bed with him and my Gran on those cool nights

Dogs are bed warmers unless you have a really big one like my male that hogs centre or a old female like my other one with leaky bladder.
Both are banished by the wife that rules the bed

I know the feeling… nothing beats nature’s heat… 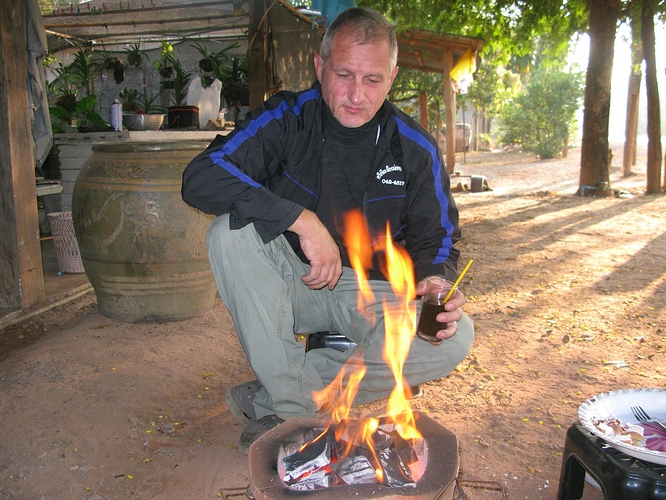 I’m not a fan of fire right now!! TomC

Sorry for your loss Tom. I’m glad you didn’t lose your sense of humor with it.

I still make a lot of hot water bottles for my wife. She has a proper " one eyed baby " as her family calls a hot water bottle but when she is feeling cold I frequently fill 2 litre plastic soda bottles with hot water from the tap to augment early night body heat. When my two daughters were home they also got hot water bottles many nights, a bit of warmth until the bed is toasty.

My mother had a slab of soapstone with a handle that she would put on the woodstove to heat. I think maybe originally it was meant for a foot warmer in the buggy. As a youth, I did the bottle of hot water thing. What we now use is some sort of cloth bag filled with raw popcorn, must softer to cuddle. it started out as a tube sock full of rice, then dry beans. Later a sleeve cut off an old sweatshirt sewed shut on both ends. Later yet store bought fleece bag.

I recall reading about an old time bedwarmer that was a metal pod on a log wooden handle. Fill the pod with coals I think and slide it under the covers. Must have had some sort of insulator around it to prevent sheets charing.

Not sure who on the web to believe but by volume all say they were used with heated stones for bedwarming and most say that some were designed for embers and hot ashes and had to be moved about to avoid burning the sheets. There was a translation from 1850s that seemed to be more of an instruction sheet. I tried to link what looked like the most complete but it wouldn’t work for some reason.

Those were called bedwarmers, hot glowing charcoal filled, then sled between the cold sheets to heat the cold bed

a kind of ironing the cold out…

Other styles used a wooden frame to hold up the covers like a tent so a raised heating vessel could warm large areas unattended. One style was called a bed wagon.

Aah the black gold. Endless use for it