I am in the process of building a gasifier and have some questions.
I am using a 55 gallon drum and have half of an nitrogen tank to use as a burn tank.
I am going to insert the tank upside down in the 55 gal drum.
I have a large square piece of metal to which I will weld the tank.
How do I secure the square metal to the 55 gal drum after I insert the burn tank.
I see other tanks with a band around the top of them but I don’t have that kind of drum.
I also have designed a 1&1/4" pipe system to deliver air from a compressor to the inside of the tank.
the tank has a taper in it as I cut off the valve and left a smaller opening (about 5 ")
I need to manufacture some sort of a “Burn chamber” to insert into the tank.
I will add some images on my next post if I get anyone to answer this post

Hello Mr. Ponsonby and welcome to the site .

We are reading your post but it may be difficult to answer the questions without the images.

I hope to send images this evening

I´ve started to build a downsized experiment. 8 inch ss burntube sorrounded by propane tank for gas housing sorrunded by isolated drum used only for air preheating. A small jacket just around nozzles fed by valve sucking air from inside the drum witch will be fed from cyklon heat exchanger. Please comment.
Will there be any disadvantages having a centered bowl for char deposit adding that extra volume below grate? 8-10 inches from grate to bowl bottom.
One more thing: I can no longer post in wood supply topic. It says “Forbidden”. Worked just fine before. Anyone, please.

Chris is working hard on the problem and hopes to have it all straiten out by the end of the month .

Wayne…I have found that if I hit the reply button on a previous post, that I have had no problem with the forbidden problem, coincidence.?..maybe. Just know I was having a problem posting any long post until I started doing it that way.

Jan-Ola; You have impressed me as a busy young man, not like a few of us who are retired and have a lot of time. Going off and building a gasifier can be along process if you don’t have some tried design. That is why I suggested the charcoal route to get you up and running fast on wood. Having said that, what you have and are planning on doing is a start. Most of us are trying to keep the height of the unit as low as possible, so in my case, I actually gave up some of that space and now I don’t have enough room for much char/ash. I don’t know of any problem from having too much space down there.TomC

PS If you goo with your own design, in order to help you, we need lots of pictures

i noticed if i saved a reply and it was not done loading the save, when i left the page then come back too log in and might get the forbiden, Then if i open differnt thread it might not say forbiden and clear .

Like Mr Wayne says, keep the areas with hot gas small as possible. Better to have a small boom than a large one.

Plenty of pictures and even drawings will help.

Thank you all for beeing helpful.

Tom, I´d love the “tried design” but I´m not able to get premium:

“NOTE: As of Jan 1, 2015 we will no longer ship to addresses in the EU. This is due to a new VAT tax law. Orders from these countries will be refunded. Sorry for any inconvenience.”

I contacted Chris and I told him I´ll try to have an old friend in Norway to buy me a present, but I couldn´t get in contact. She might not even be interested in woodgas

This is why I´m trying to combine information: Imbert, swedish S.M.P, Vesa´s heat recovery and what I´ve figured out from WK´s extended oxidation zone. Building from what material I alredy have also adds to satisfaction.

I think you would be better satisfied with a flat grate . The FEMA design uses the bowel and years back I also tried it but never worked properly .

Ok JO. I’m on your page. Then I would suggest you draw up what you can of what you plan. I can’t do CAD drawings or anything so I ( and I think Mr. Wayne ) just draw up with free hand. Then I have to take a picture of it with my camera which I down load to the computer, and then I can post it.

Let us see what you are doing before you do it and we can make suggestions that might help. If you build something and then post a picture, it may be too late to make a change. We aren’t here to pick your design apart, we just want to help. The less problems you have the more you will progress and hopefully end up with a better buildTomC ---- Looking forward to the sawmill pics.

Took a few pics of what I,ve started.

Pic1 Uppside down propane tank. I cut off foot and cut hole for my 8" ss burntube.
Pic2 Top of another propane tank will become top of the small air jacket.
Pic3 Burntube put inside
Pic4 Inner ring of an old bearing will be my 3,5" restriction.
Pic5 Looks like a kids drawing, not even in proper scale, but might show what I´m thinking.

I´m aiming to feed a 1,3 or 1,6 liter Skoda pick-up (Rabbit) because they are really cheap. We,ve got only small roads around here and traffic is slow. 8" tube might be to small and if that´s the case my small 1947 Ferguson traktor will be my second choice. A smaller 2,5-3" restriction is what i had in mind then.

Not seeing any pics in this thread… I use a 6" hearth in our small units… they work well with the tractors i’ve installed them on so far.

Oh, I thought that was for large engines like V8

my hearth tube is six inches and my restriction is two and a half. this is what i used on our small case tractor

Here are my pics an easier way: 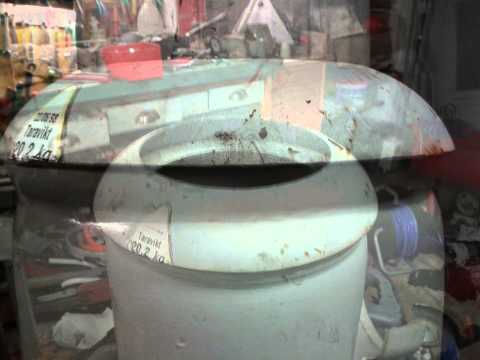