Hi Everyone, there has been a lot talk on this topic on a lot of different peoples threads. So here’s the place to put it now.
@gasman, @mggibb, @KristijanL, @TomC, @don_mannes, @JO_Olsson, @bdstater, @k_vanlooken, @kmrland, @Chris and anyone else.

Max, it gone so no one else is confused by them, here is a new drawing of the cross section of the grate valleys and gaps.

20161116_131140.jpg2560×1440 822 KB
I want to build this kind of grate to fit in my 10" dia. support area at the bottom of the reduction area if I can not slow the slippage down on my gasifier. It will have support bolts that can be adjusted in hight and rest in the holes of the grate keeping them apart (1" or so), and also I will be able to still use the grate shaker.
Above that will be my 7" reduction tube with ash insulation around it.
We will see in a few more trip with the truck if I fixed the char slippage or not with the present reduction modifications I made.
Bob
2 Likes
Bobmac (Robert Mackey ) November 16, 2016, 7:30pm #3

@Chris, maybe you move some of the discussion on the other threads here to get it all together. @JO_Olsson, @KristijanL, @mggibb, @TomC some times we just get carried away and forget where we are. Lol
Bob

The talk of angle iron and ss angle bar is a use of a symmetrical 90* V-profile,
collecting ash on it as a protection and cooling by radiation downwards.

The top can probably be called the “valley” containing the protecting ash.

The distance between two adjacent angle-bars is naturally the “gap” between them.

The only one using angle iron grate bars under a WK gasifier is Dustin,
to my knowledge. Getting his dimensioning and experiences of the arrangement
would be very valuable!

Thanks Max, I knew someone was using that kind of grate in a WK.
Bob

yes I did install a grate using angle iron as robert has outlined - V down. The material was something like 18gauge SS angle approx 1inch wide on the flats. If i recall correctly I made the gaps as wide as my pinky finger approx 1/2inch. I set the angle inside a round cylinder (bottom of a 100lb propane cylinder to add a “lip” so char could not roll off the flat angle and to stiffen things up. I still suspended the the grate from chains from the bottom of the housing because I was afraid of it clogging if fixed solid. I left about an inch gap between the housing and the top lip of the grate. I checked it the other day through the cleanout hole and everything seems to be holding up but looks like the chains need to be tightened up as i now have about 2inch of space between the housing and grate. I do seem to slip alot of char now, not so much when first built.
Before using the angle iron grate I had used a standard SS flat grate. Experience with both, the angle does seem to have a better ability to hold its shape, no “potatoe chipping” after repeated heating. The insulating ash does seem to protect the angle and the thin 18gauge material hsa held thus far.

Thanks Dustin for the reply, on how you designed and built it. Good to know it’s still holding up good in the WK.
Bob

Thanks for reporting! Please tell how it turns out after tightening up, and if you can avoid the “slip-edge-slot” all together!

Can you do a manually loosable attatchment without the constant dingling-dangling? Manouvered from the ash door?

Your “mapping” shows clearly where the low-end borders of your gasifier are. And generally.

Increasing the reduction volume and decreasing the bit-size leads to constipation, as ash-blowing does not work well enough in the current flow area.

Another (mechanical) way would be to introduce light sieving
at (every) some bunkering stop.
Meaning, to help the inadequate ash-blowing by letting the “small stuff” flow down between “just-right” angle bars, from one side to the other, alternating.
This could help keeping a bigger reduction volume chemically active by avoiding it to “drown” in ash.

Another idea is to make a grate with a slightly finer “mesh” than the current one…
The current one seems to favor “big or nothing”.

Meaning the ratio between angleirons and the “valley” width.

Now, a big bit can “live” on the “valley”, as all smaller ones are consumed by the gas-stream over the gap and dropped through.

I must admit I’m a bit confused by your statements.
First of all:

Increasing the reduction volume and decreasing the bit-size leads to constipation, as ash-blowing does not work well

Nothing wrong with that statement, BUT that was NOT the state of the gasifier I was describing above. Rather the opposite - needing smaller fuel to cool things down. AND I have never increased my reduction volume.

OR are you saying 4:1 - 5:1 is unnecessary high vacuum to keep gastemps down? Could gastemps be lowered with lower vacuum only by keeping char surfaces clean and active by increasing the velocities?

slightly finer “mesh” than the current one

Ok! Sorry to have caused a confusion!

I did willingly not start with your “state of art”, as it is already well known to everybody following your thread.

“And generally”. Was meant to focusing onto something else than the conclusion of your “mapping”. (kartläggning)

Now, decreasing the output gas temperature is obviously a question of fulfilling the oxidation and the reduction process.

The grate architecture is important for the mechanically “surviving” char bits; make the valleys slightly narrower than the gaps, and the “oversizing” of surviving bits will decline.

In the same reduction volume you want the bit mean-size to decrease by not “preserving” big bits on too broad valleys.

Going in to mechanical means later.

Next “round” I expect to be on Jan-Ola’s Thread…

Hopefully Chris is “mopping up” our …

It’s hard to talk to everyone on a topic that is brought up in discussions and you are not on everyone’s else’s thread.
Bob

OK, I’ve moved some of the posts. It’s hard to untangle a discussion like this and not leave some holes, so I err on the side of caution. Also note that moved posts can appear out of chronological order.

A tool you may not be aware of, is the “reply as topic”. I’d like everyone to make an effort to use this when appropriate.

If you want to reference a post in an existing thread, just link to it, like this,

or like this (leave a space in front of link):

or like this (no space in front of link):

Posts with links to them show a link to posts which are referring to it. For example, if you look at Matt’s post, you’ll see a link back to my post here.

Help me help you… it’s a lot easier if you self-organize the posts than to have me try and clean it up later.

After reading it over and over again I see what you are talking about, my brain has the light bulb turned on, but not on bright yet. Lol.
Bob

Thanks Chris for the instructions.
Bob

I was jusr about to do my ashpit cleanout so l decided to allso take a look in the charbed and show you guys the insides. 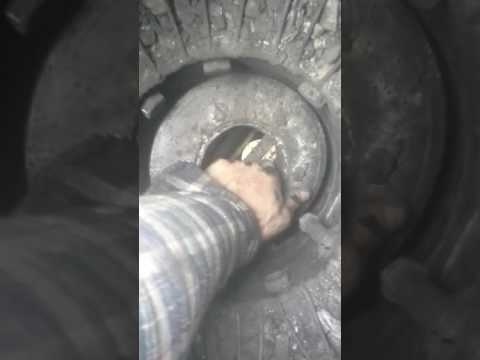 This was a experimental design, but it prooved well so l stuck with it. The restriction plate is already a bit deformed and cracked (cast iron) and the grate has a few scales on but we will see how long it lasts. Both can easyaly be changed.
The grate is 2.5mm mild steel.

Thanks Kristijan for the look inside your gasifier. I see your clean out is directly under the grate.
If you would just grind a little off the edge of the plate on each side it will come out easier. That is what I had to do on my choke/reduction plate the ash fills in on the flat spots that are ground off when placed back in. Love the design work you have done. You keep giving me more ideas to do on the mini WK Gasifier I want to built. A lot of the Members ideas are going into that next build that I want to do. But first I need to finish “The Gasifier That Wants To Be”, charcoal gasifier build and get it up and going.
Bob