Here are some pictures of my hay filter. You can see the issue… OK, so why is this in the “what not to do”? Because I think we’re about to find out why these thin drums are a very bad idea. They are light, sure, and moderately easy to build. But particularly here, in the always-wet hay filter, I don’t think they will last much more than 18-24 months

What else can be done here? Thicker metal would last longer, but will eventually rust just the same. Still, I would recommend using a water heater over these thin drums.

Pesonally, I’m planning to experiment with plastic. I think the temperatures are fine, corrosion is a non-issue, and it should last indefinitely, if taken care of.

I plan to stack them up and weld them together. Adding fittings will be a challenge, but not impossible. Plastic welding is actually quite easy. Here’s the kit I got: 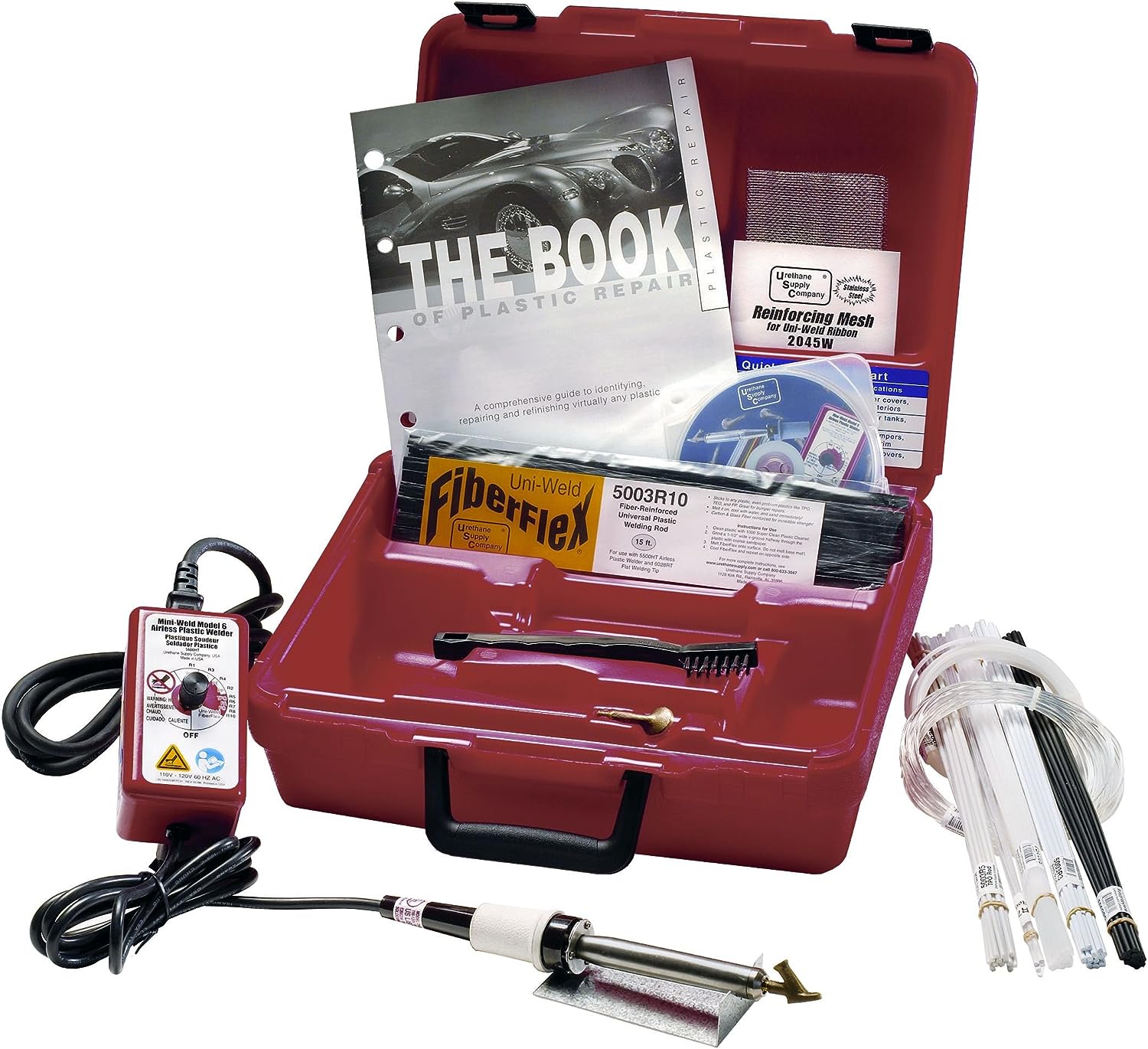 Product Description Urethane Supply Company's Mini-Weld Model 6 Airless Plastic Welder is the next generation in plastic welding technology. Some of the benefits of this new design over our 5600HT model are that the...

Plastic welding can be useful on other areas of the gasifier, I’m pretty sure. For instance, instead of taping over those wiring holes on the blowers, I plan to weld them shut, and redrill smaller holes if needed. Pete, these rusted from the inside out. I scraped off the paint to reveal the holes (it looked pretty good until I did that!)

Chris , Thanks for waving the red flag. Maybe if the inside could have be coated with some type of corrosive resistance material they may have lasted longer . I think I will opt for the plastic or the thicker water heater tanks .

I just checked the date when the thin drums were installed ( mid April 2012 ) and the life was less than two years .

According to my New Micrometer those metal drums are .025 inch .

Sorry Chris. I was just being a smart a**. I actually thought it had caught on fire and burned the paint off. Epoxy paint maybe?

Has anyone experimented with water soluble oil? As in coating the inside of hay filter with it. I know they used it with steam engine works. It would be messy but it’s messy anyway inside of hay filter, it may help with cleaning gas and keep metal from rusting! Just thinking/wondering! herb

Lot of different ways to hook pipes up to them. I think I’d have a plan for reenforcing the sides of the barrel. I collapsed a sheet metal filter housing. With a little heat added to the plastic it might try to suck down flat. Maybe some metal rings, inside or outside? Cut the rest of the barrel up into rings and weld them on? I’d try to use the ribs in those drums as the joint if I could so you’d have a double thickness at the weld.
http://www.lexingtoncontainercompany.com/New-Drums.html
A 20 gallon may be about the right size if the welding doesn’t work.

DRY DRY DRY … I still use hay for a filter but it has to be dry !!! If you mix water, woodgas, hay, soot etc etc you get ACID and things corrode quickly. I made the mistake a couple of times of trying to flush a filter with a hose. Sure it got clean but it never dried out after that. It all depends on where you are at. We haven’t been above freezing for months and barely above zero for weeks. I am still walking on 1.5 feet of solid ice here … Go to thicker metal on all components. oil drums are too thin to use here. put a plug in the filter base to drain off any condensate that may collect in it … Well, whatever … With frozen toes, Mike

Wood gasification: “It all depends on where you are at.” m.lr.
A truer gasification wisdom never spoken.
Perfect chemical and thermal knowledge will always get you ass’ed kicked around out in the the widely variable Real World with “considerations” giving you the constant Booting.
All you fellows still thinking you can read yourself into working useable gasification will learn you have to do your own DOings.
Only way you can learn to do some kicking back to something useable for You. S.U.

Mike is right, damp/wet hay will make acids. But this wet filter is more effective than dry hay (just ask Henry Austin)… being a large surface area it wil condense some moisture no matter what you do, so I’m not sure how it could stay “dry” completely. You’d have to have all the moisture condensed prior (only very cold weather can do this). Ironically this is how Henry found out about dry hay - cold weather, no moisture made it to the hay filter, hay plugged with soot.

Steve and Mike, spot on with the location thing… Cold climates need to minimize wet filters because anything wet will freeze. For Wayne and anyone in southern areas, the damp hay works pretty well.

DRY HAY! My hay is anything but dry, I thought that was the whole idea of how the hay filter worked, water worked it’s way up the hay as you drove and kind of rained back down washing the crap down as it went. How would dry hay do any filtering at all? I know on mine I have water in the bottom of both of the hay filters until I pull the plugs. I have 1" hoses on them about 18" long, after a hopper of wood they are full and ready to be drained! That is why I was wondering how water soluable oil like they use with steam engines would work on the walls to keep from rusting and help with cleaning gas. herb

Hey / hay all, This has been a weird year for sure. I keep joking with Sue that we are on the edge of an advancing glacier. Opinions ??? Mike
BTW, sun is flipping magnetic poles … I’m a radio operator … Last 2 sunspot cycles did not happen. Could not hear Cleveland last night … Had to settle for poor copy from Richland Virginia … Get ready and get used to it … Be an ostrich and stick your head in the sand … That’s a joke :o) ??? … M

PS, DUCT TAPE !!! Also, Aluminum tape and RTV will keep you rolling … I wish Werner was on here posting … How long do you plan to run a unit ??? I try not to use anything thinner than a water pressure tank now or a hot water heater … Trouble with hot water tanks is that many have a glass coating so wipe out saw blades and make a mess when welding … THANKS, Mike

If you goggle acid resistant paint there are lots of epoxy based paints that would protect the metal.

After doing some recent reading, I discovered that different brands of “bed liner” have different temperature resistance. I originally posted bed liner as a way to protect the barrels or what ever vessel from corrosion. I actually was thinking of a product called por-20 which is rated for up to 1400 F, I just mentioned bed liner because it would be a better known name as opposed to the por. But some of those bedliner materials CAN’T withstand over 200 F which is why I’m editing the info. I hope no one used a bed liner without checking the heat rating first.

The very thin ( .025 inch ) drums with only a paint coating doesn’t stand the test of time.

Last week I visited an Air Force base in Florida and was shown a commercially made gen set they had recently purchased . They have not been able to get it to operate yet ( I mention the 25 / 75 % expression we use here on the DOW ) but it had the small thin drum for a filter. I mention with time they would have to replace the drum .

Yes Wayne, they are referred too as “glass-lined”. It really resembles a porcelain coating, to me anyway.