If this has been mentioned, I apologize.
This coming Sunday on the History channel’s mountain man show @9:00p.m., The simplton know as Eustache has built a woodgas powered truck. I remember Wayne being approached about helping to do this and the overwelming opinion at the time was that it was a bad idea and the History channel will make a mockery of woodgas. Just wanted to let everyone know that someone has helped them and the show is on this Sunday night at 9:00 p.m. on the history channel. If this has been mentioned and I missed it, just ignore this post. Dan

Thats what I gathered from earlier too. Hope it don’t make woodgassers look bad. I’m sure some of us will post what we see. Dan

Thanks Henry, I, and I mean I know you are the real deal … You were never satisfied the way things were running on your truck. You kept trying to make things perfect and I could barely talk with you. I, on the other hand pulled in with my truck and made it my home and didn’t light it again till I left. I had a wonderful 150 miles on the way home and drove 120 miles on the way there 100% wood. I’m too old to compete … Keep up the good work. Wes drove me to town to get some outdated milk that the cats are still enjoying a month later. I wonder why it didn’t go sour ?? I’m looking forward to what Wes has to say after a few thou … They can make all the videos they want but weeez doin it … Regards, Mike L

Beth looked up the episode schedule for the Mountain Man show on the History Channel. It is channel #120 on Dish network.

I am laughing as I type the write up for the episode: “An overflowing river threatens to trap Marty; Tom’s experiment goes up in flames.”
Don’t want anybody hurt - but it sounds like some entertainment for us.
We’ll be taping it - or you should be able to watch it in it’s entirety (after the show airs) at: www.history.com

Have we talked about the show that the “Planet Mechanics” did a few years ago? I think they did it for real. Do You? 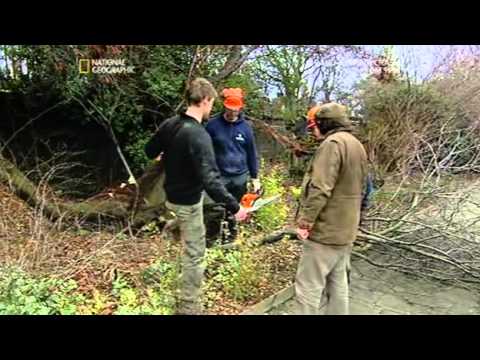 I’ve watched that one before… looks like it was a viable system, but built in a week? who knows. How many people did they really have helping them?

Thanks Pete for that link. I think they did it for real too but not with those two guys in a week, unless they are a whole lot faster than I am. (which is possible) It shows that they took the gas tank and any gasoline related hardware out of the truck so unless they had two identical trucks -one to show running down the road (on gasoline to make it look good) and the other as a mock-up woodgas truck, I believe it was the real thing.

Hey fellas you can see this exact gasifer system taken off, modified and transplanted onto a converted David Brown three cylinder tractor in Sweden now:
www.vedbil.se
Open up the righthand side bar link, “Carbon Neutral Farming”
Ex-submeriner and red Volvo car woodgas converter Johan Lindell says he went to the UK and built this for that program. Do to “respect for the company’s wishes” (L.H. sidebar 2007-11-24-5 Woodgas in UK) he does not picture or promote that work.
They gave him the Toyota truck converted and he took it back to Sweden. Unable to road license the Toyota truck there he used the hearth system and parts for his farm working tractor conversion.

So, Yes. A very real and workable system. A Werner system.
He did say he was video production pressured for time to do the job that he really wanted. I even “think” recalling he said, even hinted strongly not to make it look too impossible professional “good”.

Ha! Ain’t me. History Channel on these kinds of programs are way too dumbing down for my tastes.
Really? Putting the Draino into the actual fueltank on a doomers GM Suburban scrounged kitchen greaser get away!
You do that outside the working diesel engine as a vegi grease fuel refining pre-step!
I think WanyeK and HenryA were wise stepping away from this one.

If the gasifier build went smooth with no issues it would make for a dull program . If there are smoke , fire and explosions it will draw more viewers and more negative opinions to woodgas .

“Tom’s experiment goes up in flames.” Tom Oar isn’t the one doing the “woodgas truck”, Eustace Conway is. “Tom’s experiment” is something to do with leather tanning and a camp fire.

Sadly, Wayne is spot on. Itll have to work to be consistent with history (I would guess) but will have to be fraught with issues to make good tv. That would certainly portray woodgas in a negative light, such a shame.

Given that the episode will cover multiple mountain men I would expect the woodgas feature to be brief at best, but well see.

Let’s enjoy it while we can … Mike L

Hi All
At an all family get-together, fish-fry last night Sat June 21st (wearing my DOW hat1) my #2 Sister’s boy-friend said he’d see EustesC. tring to fire up a wood powered pick-up on the Mountain Men program.
What kind of pickup truck? “A compact RED Toyota or Datsun”
What did it look like? “Barrels in the back like you showed me in that book.”
Did ir work and drive? “Donno’. Had to quit watching to come here.”
They are very rural out in central Oregon ooast. Satellite T.V.

I aint seeing it up yet offered to me on my cable service.

Hi Steve;
Don’t air until 9 p.m. tonight eastern time on History channel. I have seen the commercial again today and it showed Eustace trying to start it with a big flashback out of the Gasifier. It was a Toyota like you stated earlier in this thread that appeared to be multi colored. Dan

Wow, there system looks easy. no cooling, no condensate, no pesky safety stuff.

You got that right Herb

Well just another program that has been sensationalized for the masses. Ratings just wouldn’t be any good if it didnt blow up. Too bad Eustace didnt have his mug in there to get a facial trim. Now that would have been a true reality show.

About the same integrity as that episode on the Simpsons.