Not bright bulbs, no doubt. It’s hilarious what passes for “good enough” with many people.

The new silicone formulated paints (ISO 9002) are waranteed for 50 years at manufacturer level. And with a galvalume substrate below, still quite inert. To maximize the life span, I recommend a white or grey, the less it heats, the longer it will last. My one building and workshop now have 20 years under the sun, regent grey, still shine. The most I will have to do with them is maybe change the rubber washers under the screws.

Hi Chris did you have a well or cistern on the property at one time? I noticed the back of the property in the pictures has some high ground. May be there is a spring hiding on your property. Just look for the first green area after the winter months.
Bob 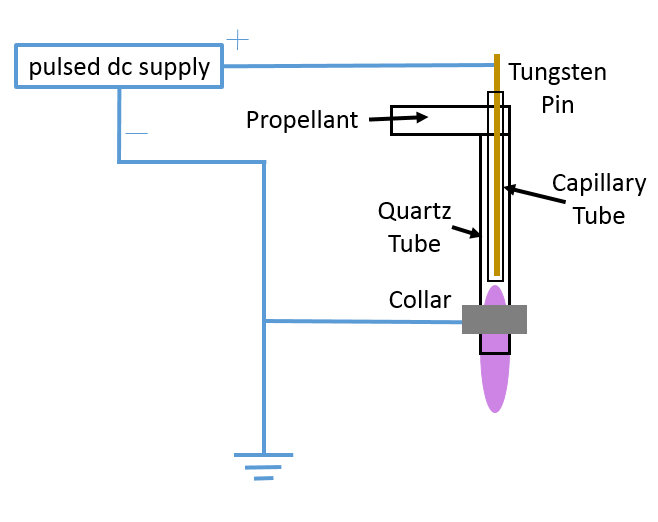 Many of today's methods of purifying water rely on filters and chemicals that need regular replenishing or maintenance. Millions of people, however, live in areas with limited access to such materials, leading the research community to explore new...

By the way we don’t drink the water, it’s used for washing / showering / laundry. Bottled water for drinking and cooking. Once I have a bulletproof filtration system I’ll consider drinking the collected rainwater.

Keep in mind when using rain water for primary drinking supply: There are some real horror stories in development work history of well meaning folks introducing different kinds of stills (usually solar) to purify water supplies. Great for getting the critters out, but Turns out it can also cause some pretty serious mineral deficiencies. Probably not an issue for most American diets or for short term use but it can be for pregnant and nursing women especially, and children at different growth stages. Also, most Americans are very mobile and drink from many sources, so I don’t think you’re in any kind of danger. But something to keep in mind.

My old farmhouse has a cistern, it is too close to the foundation of the house and may be a structural weakness in that corner. I have been advised to fill it in. I started to do just that, throwing broken brick and stuff in there. Lately, I am wondering why fill it in. There are no current structural issues, and hey, its water, could at least be used for toilet flushing!!

Hi Chris, I built a first flush device for my rainwater. Mine does not even have the ball. Here is a good video explanation:

Very nice David. I’ve finally got the WISY filter installed, it handles everything large and small down to a very small size, and is self-cleaning to boot. It also seems to oxygenate the water really well.

We had a massive rainstorm which was a good test of the overflow system. The tank was full to capacity with some expansion room, water was coming in very fast, and flowing right back out the overflow. Didn’t spill a drop.

I’ll have to take a video next time it rains.

Wonderful water storage set up you have there Chris. Looking forward to see how you use the water in your home.
Bob

Good evening Chris,looks like your getting a nice start on your home stedding, Is that unit any good in winter time or can it be insulated around before winter or put under frost line??.

Chris when i had my well pump replaced they found high levels of fluorine in my water under the EPA limits but high non the less. I installed a reverse osmosis system to remove it as I don’t like the idea of drinking it. Well the system I installed included an led UV light treatment to kill bacteria and it also puts back the minerals people need in their drinking water. It runs off the line pressure in the house and just draws 6 watts for the led light off a wall outlet. I bought an expensive unit because it has the lower 1:1 drain to filtered water ratio. You can pick then up online or at your local hardware store.
I was actually surprised there was a filter system which replaced the minerals you need to get from water after filtering. The system is about $450 with $75 of annual filter replacement. I can tell you my coffee is less bitter now. Anyway I just figured you might find it interesting. I didn’t think reverse osmosis would be cost effective before I looked into it. After seeing the cost I decided it was worth it to know my water was safe even though it originally passed the EPA test unfiltered.

Kevin, it’s made to be buried below frost line, but in serious cold weather it won’t operate anyhow (snow instead of rain).

Mine is in the garage which stays warmer. I plan to insulate the mechanical room.

Dan, I also intend to UV filter before drinking this water. However I have tasted it occasionally, and it is much sweeter now, with just the WISY filter in place (280 microns) Rainwater is already very clean, as we don’t have much air pollution here. It’s really just debris and bird poop etc on the roof that needs addressed. The oxidation from the dissolved air in the incoming water seems to be improving things a lot.

Nice setup chris. Any plan for increasing capacity with another tank?

Yes, Chris, bird poop can be a real health issue.

You need a diverter valve, let the roof wash off a little then run water to tank…

Update on the homestead. We’ve been living here full time for 9 months now. While the interior is mostly finished there are still areas left to tackle, and I haven’t started the outside… I suppose there always will be more to do. But we’re really enjoying the house. It’s comfortable, warm, clean, and very functional for our use.

I never really posted before and after pics, and it’s taken this long to have the house presentable enough to photograph it. So without further ado: 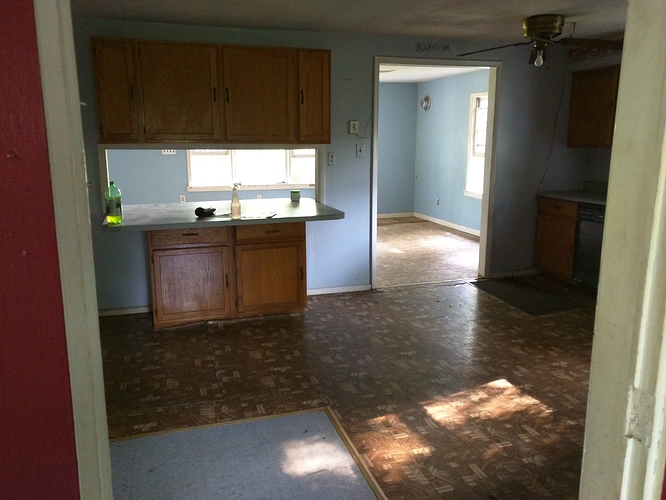 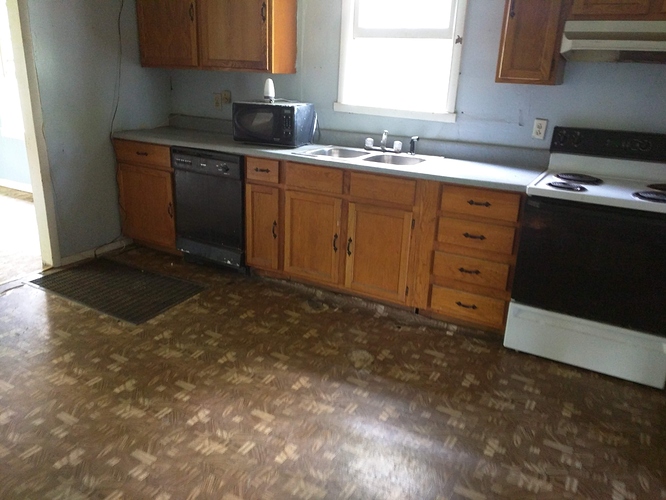 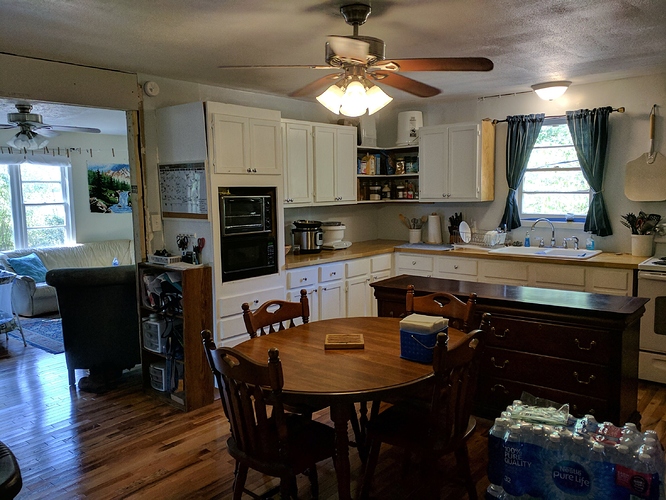 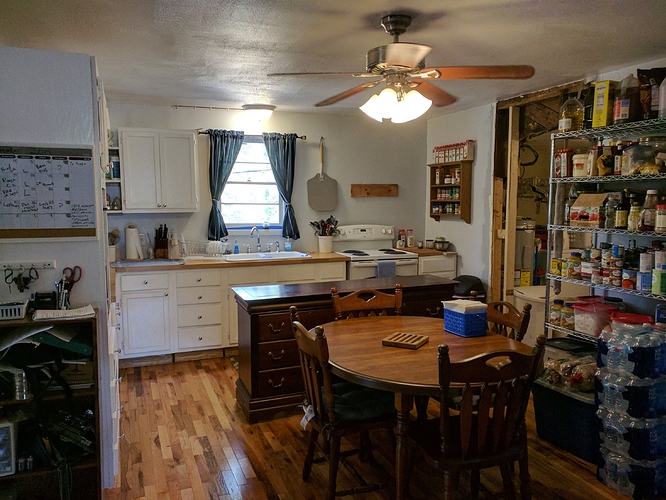 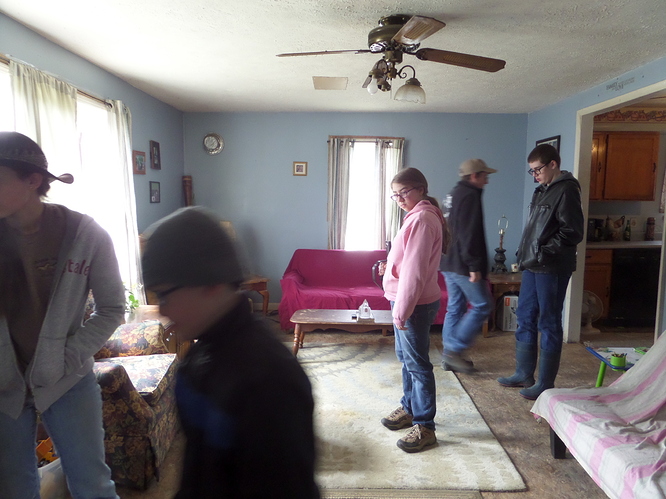 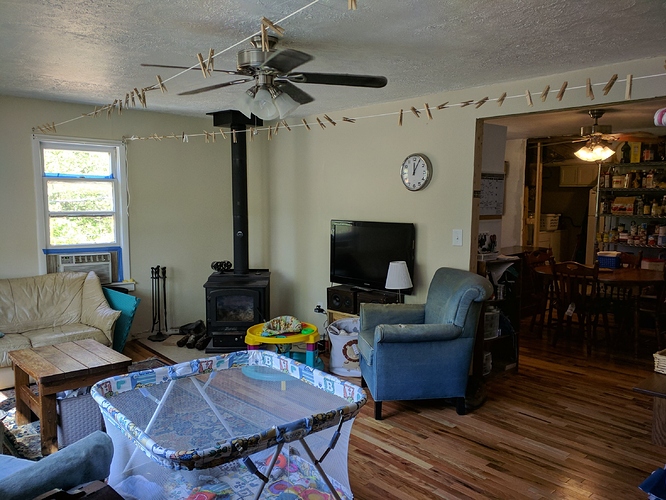 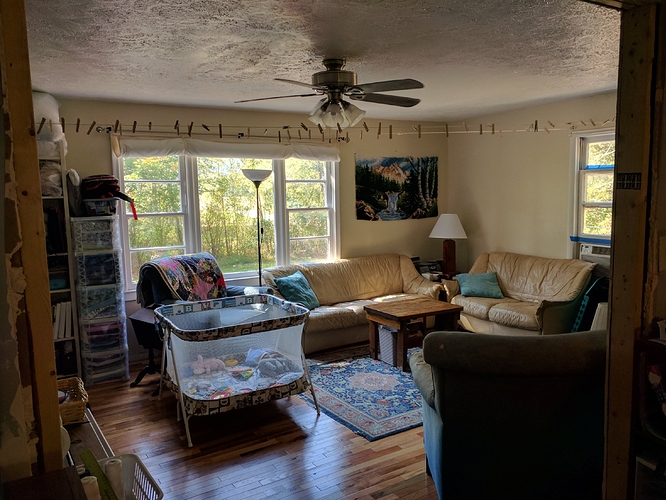 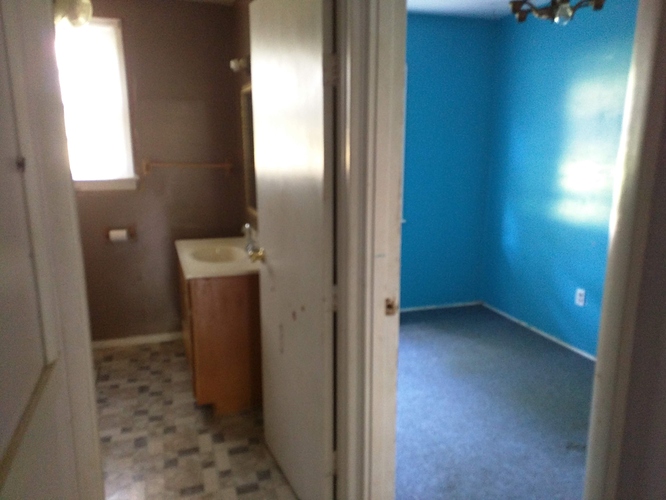 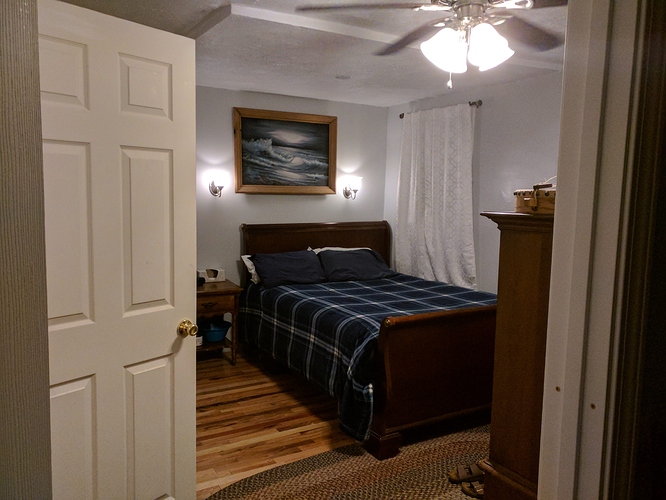 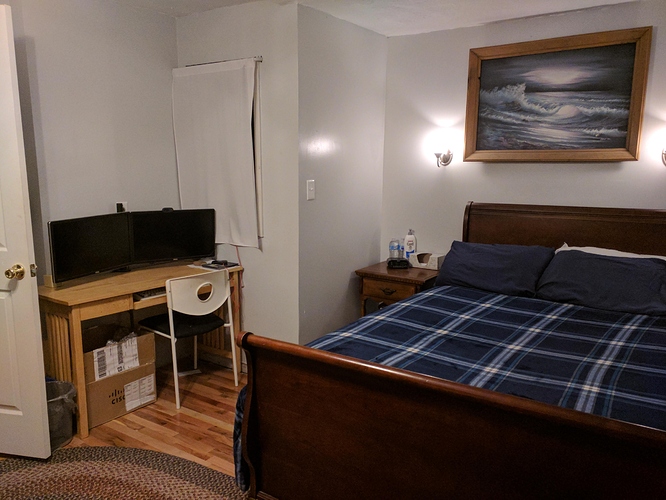 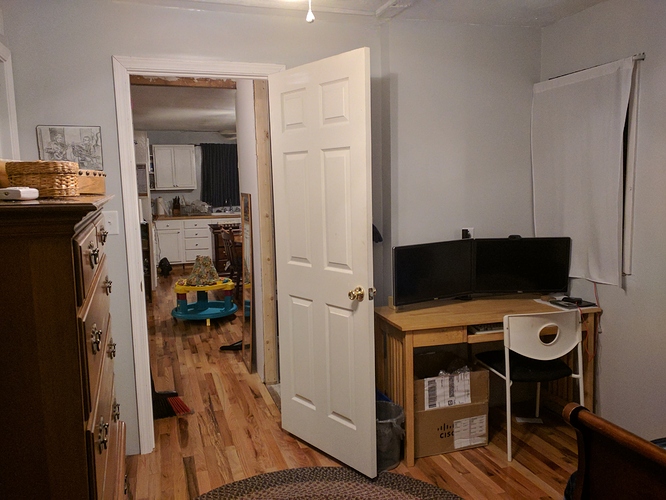 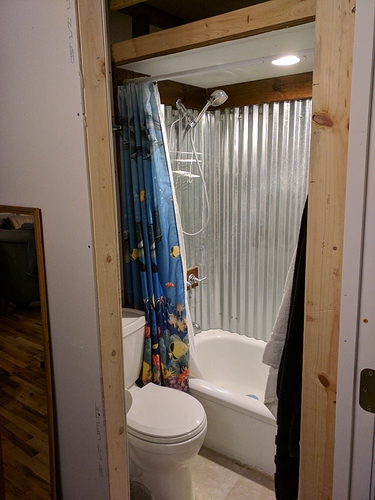 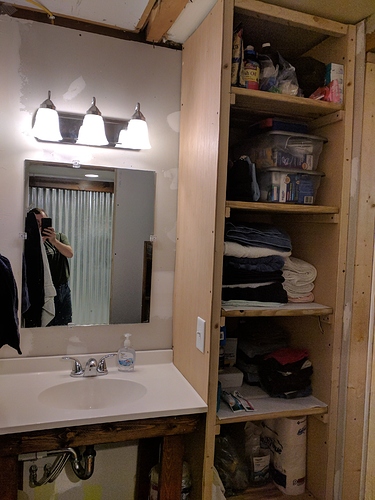 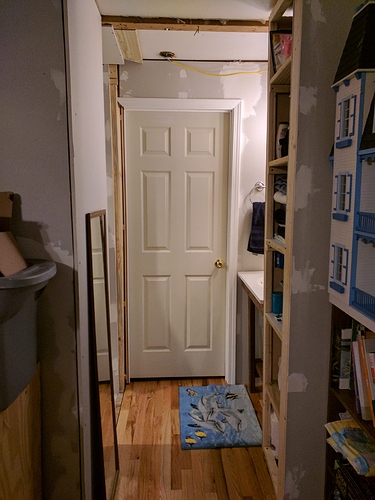 (To make sense of the new layout, look back through the demolition pictures in this thread.)

Our septic system backed up in June, so I called a pumper truck to clean it out. Turns out… there is no septic tank. Just a straight pipe to the ditch, which was clogged up. So I got to drop several grand into building a septic. Now we have a 1500 gal tank and leach field to match. Plus I had the guy grade our yard so water would run away from the house, instead of into the basement. That has been a big improvement! 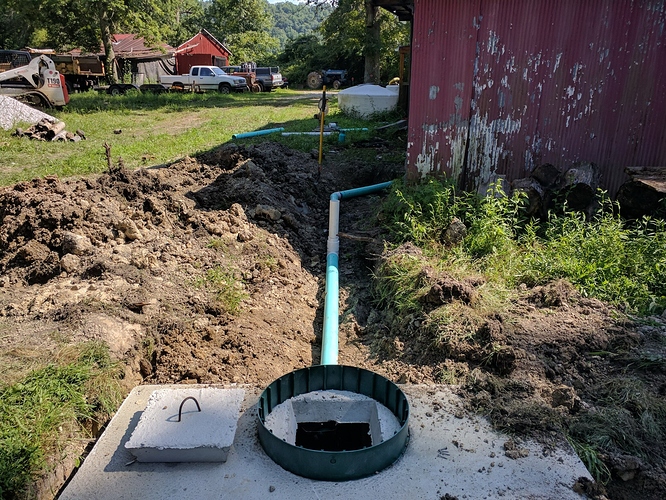 I expanded the rainwater collection system, and re-plumbed it to solve some overflow issues. Now with an adjustable overflow pipe, which drains excess water before it enters the tanks, and added two more tanks bringing the capacity to 1300 gallons. 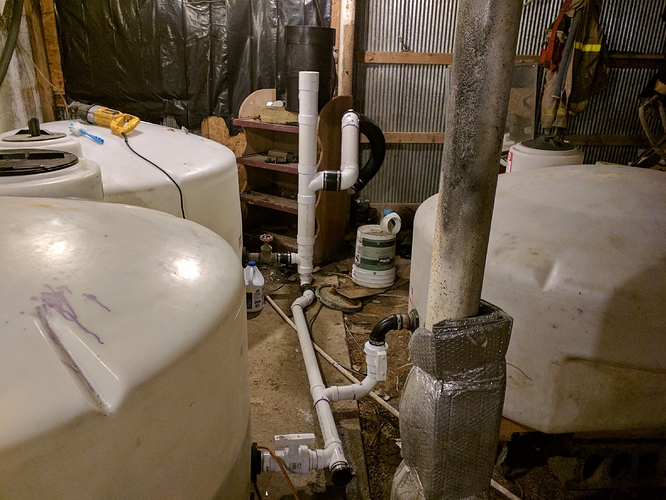 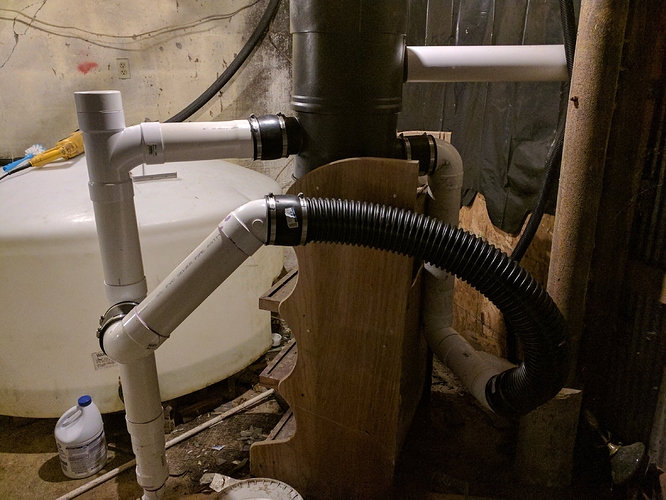 I spent the summer bush-hogging when I had time, but the tractor is currently down - a bad engine knock has me concerned. I need to pull some bearings and have a looksee. The oil pressure gauge has never worked.

Actually several vehicles are down right now, waiting for my attention. The current one one the bench is my Toyota truck which blew a head gasket. I’ve been tearing it down as I get time. Not having a truck really stings right now. However I do have a tractor and field trailer which is good for hauling firewood.

We’ve put away about half the wood we need for the winter. I’ll continue to work on it, but I’ll probably end up buying some.

And, I’ve started sketching out the new house layout. It will still be a few years before we can build, the old bank account needs a rest. But, the colder weather now means sitting by the fire together, it’s a good time to start dreaming.

The house looks like it is comming along really nice. I love those wood floors.
If you get stuck trying to find parts for the tractor let me know I have gotten pretty good at finding parts for old tractors. Those knocks are never fun been there twice with both my D17 and D15. But the good news is you can get just about every single part for the old tractors. For my money it is well worth trying to rebuild them.
As to the colder weather it is a great time to go work up some wood without overheating.

My uncle always said wood is the only heat that heats you more than once.

Very nice Chris!
You have done a lot of work in a short period of time. I like the clothes line in the house. I’m glad to know we’re not the only one.

We use it on rainy days and in the winter.
I’m curious, do you have a well or why do you need the capacity of the rain catchment system?

Very nice job Chris; from my own experience I can tell you that houses never stop to demand something, I´ve been buildin mine for 25 years and still not ready. I suppose I´ll pass away and will never finish. It´s the “law of the houses”. My congrats.