I thought I’d post an easy way to make a usable hopper alarm. You may already have the important part, a thermocouple display with alarm functions. If not, shop around on Ebay or ask some of our experienced operators.

You might think, well that’s easy - if it has an alarm, just hook it up and go. You’re right - just one issue. When the hopper alarm goes off at a certain temperature, you’ll probably be above that temp point for 5-10 minutes, as you look for a place to stop, pull off the highway, get out and refuel. Listening to a buzzer for that long is annoying.

Having a way to “hush” the alarm makes it into an actual usable system. I’ve tried complicated stuff in the past, but this works much better and is very easy. No electronics needed - just a single relay!

This setup will auto reset, meaning when the hopper cools off, then heats up again on your next hopper-empty event, it will go off as before, and you can mute it again.

All you need is: Anyone who wants to see this in action, it’ll be on my truck at Argos.

Good idea for sure. I thought of maybe adding a limit switch in my hopper, but probably never will. The first thing I did when I bought this Dakota was unhook the damn door open, lights on buzzer.

Good idea, when not watching gauges and clock it could be easy too over look hopper temp or time clock, good idea,except i would fix it with an itiot light if i could find a ajustable sensor, that would set the lifgt off,I may catch up too that circuit after truck passes dino stations,Thanks

it could be easy too over look hopper temp

It’s VERY easy to miss the hopper temps. When you get cruising on a trip, you’ll probably have to stop 3-10 times to refuel. The window of “perfect timing” is only about 3-10 minutes per refill, depending on your TC placement. I’ve cooked the hopper more times than I like to admit, just forgetting to check.

An idiot light would work off the same circuit, and you don’t need the hush button for that. I’d do that too, but I already have a crowded display panel, and the gauge itself is a pretty good visual - IF you look at it! Which is why I’m using an annoying buzzer, to get my attention reliably. It works too - I’ve NEVER let the gasifier get too low after installing this.

Bonus function is it will alert you to hopper bridging, which you also need to deal with. This you’re even less likely to notice, since it’s not near the end of a hopper refill cycle.

Thanks chris on the extra hopper temp bridgeing, I gess i gota get a get a buzzer after getting the rest done,just finished cooling rack mostly,is regular paint ok for cooling rack, or just on the sides?THANKS

Just an idea: This oven/meat thermometer comes with temp alarm setting. Range is from 0-300 C (32-572 F). Only a few seconds beep when temp is reached. Should have lot´s of brands to choose from. The piezo buzzers are pretty loud, and only a couple of bucks. (like 5 from ratshack) I don’t know know how that stacks up against your door buzzer. It is a great idea.

However, It might be fun instead of just disabling it. It should be like a loud computerized voice on a countdown like “10 minutes to core meltdown and imminent reactor destruction”.

Hi jan o, that looks about my best bet, plug it in and wait for buzzer, I might have too move it back a little as these hoppers go too about 800 when out of wood,depending on the placement of the probe,Thanks for extra idea

Hi @Chris do still have the instructions book on the operations of the display and setting the temp.
Still working on some of the little things that needed to be fixed. Trying to clear your list and mine it was a long list, got to love it.
Bob

Would this model work with your relay/buzzer circuit? I am an audio engineer with lots of soldering experience. I now live at Dancing Rabbit Ecovillage in MO and really hoping my rig works when I fire it up this week!

I don’t think that model offers an alarm function. It has an SD logging feature which is interesting, but not very useful for our application. Plus it’s expensive!

The non-alarm displays we’ve been using are here:

My favorite alarm gauge (for the hopper) is here: 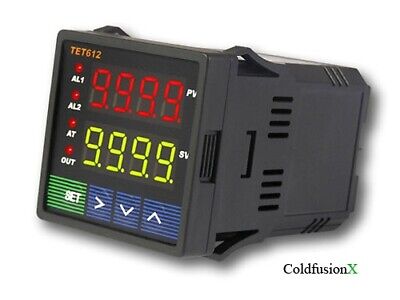 Basic probes are really cheap (just one example, look around for more)

Fancy probe with weatherhead, Omega brand - this is what I used, but they’re $$.

Chris, are these items all listed in the thread of materials to buy for the WK?

I don’t think they are. That’s more for “essentials” and this is an optional upgrade, one I personally recommend but optional nonetheless.

Wayne’s original setup with BBQ gauges works fine, and those are on the materials list.

Anybody thinking about thermocouples will need do some searching and reading, and should find Carl’s TC thread, possibly this one too.

just a side note, make sure the T/C is the non grounded type.

If you don’t mind non-fancy mounting I can highly recomend the $10 oven/meat thermometers. Comes with alarmsetting and all. Tells you when the roast is ready.
Downside is that the wire is usually only 3-4 feet long. I mounted mine right inside the rear window.
I couldn’t do without the alarm. On longer trips it saved me from burning down the charbed many times.

I use a wireless meat/grill thermometer, with alarm. put transmitter in water tight box on the outside, receiver is hand held inside. The downside is both have batteries, you have to shut off when shut down

Al, I considered them as well but couldn’t find one with Auto Off either. Also they are a little more expensive, which was a great help in my process of deciding

Hey Amurphy,
I like the 4 channel part of your linked readout, and the logging feature. That could be very useful. I also like Chris’ link to very reasonably priced thermocouples and readouts. Chris has sold me on the idea of an alarm feature, sounds like J.O.'s oven temp alarm solution is also a good one.