Officially started my chunker today, the cutting wheel is cut, and I have sourced the motor/gearbox spare metal. Just going to buy a HF trailer for around 100 bucks for a frame to build off of. I am thinking of not using a flywheel as I will be using a 7.5hp 3 phase motor along with the cutting wheel which is the drum off of a semi truck, so it has some mass to it. I will be driving the 30:1 gear box with a 60 chain and 1:1 sprockets (for now) Decided to go with a chain to keep the torque up through the cut and as a weak point before the gearbox. The shafts are all 1.50 inch dia. The cutting wheel is 17in dia. half inch thick.

I can’t wait for the pictures. I like seeing what people come up with.

I second what bill said,sounds good, though it seems it should have some sort of clutch or slip point. i got some spockets i may use for a reduction off an old trencher.

Kevin, I agree I would like to use V-belts and those would be my automatic “oh bleep” buttons however I cannot find any V-belt sheaves with a 1.50" keyed bore.

Even with a hefty motor you’ll want lots of flywheel action, the more the better. I’ve got 210 lbs and its just barely enough sometimes.

Also agree on belts over chains… you’ve seen the failure modes of each, belts are far more forgiving.

Thanks for the store Tom!

Anyone know of a store that sells really heavy pulleys that I could use for some flywheel action?

John Collins added barbell weights to his for a flywheel. You might get a couple of fly wheels off from engines and mount them. If a junk yard is around look for heavy pulleys on junk farm equipment. I junked a combine that had a heavy 12 double shiv pull. Maybe an old steel farm wheel. All sorts of possibility other than the “store” TomC ( even make a cement wheel )

I used a truck brake drum for a fly wheel. If I remember correctly it weighs 70-80 pounds with the most of that weigh being on the outer perimeter .

I think the flywheels are important . With the flywheel a lot of work can be done with very little power required .

Before I added the flywheel to my chunker I broke the tractor PTO shaft. After adding the flywheel it is a very smooth load on the shaft with no shock.

I would think a wheel, and tire filled with fluid would make a good flywheel if you can’t find anything else.

I would think that a fluid filled tire might not transfer it’s energy quick enough: the chunker could stall, the tire would also stop, but the fluid would still swirl and slosh around in the tire for a bit.

you have to have it filled completely no air space. not the best way, but if you have nothing else. foam filled would be better.

Good ideas guys. Yeah I have another truck drum that I could maybe use. At least I know that it would be balance. I am also using one of those for my cutter however I had to cut about half the weight off. The outside of it has that ring that makes it about 1 inch thick of steel.

Took me one and half cutting discs to remove that band. Hmm wonder if you could attach that band to the other drum to increase the weight

Same for me Tom, lots of grinding bu worth it, it is some tough metal.

Hi Joseph,
A couple things. I was one of several folks who suggested to Mike L to use a HF trailer for his gasifer and it ended up being rather flexible for the task. I’d suggest to use a frame under the chunker and just have the trailer under it to make it mobile.

If you find proper sized pulley’s that need keyways broached in them I can help you out as I have dumont key broaching sets. You’ll probably be more successful finding taper bore pulley’s and just use the proper hub. I presume you already know they made a significant variety of designs. If needed - they can usually be re-keyed if needed. I’ve bored them out before too but feel it’s not worth the effort and time.
Best,
RonO

Here is my blade, before and after grinding… Still have more to grind. I heat treated some of it as well. (where I am done grinding) 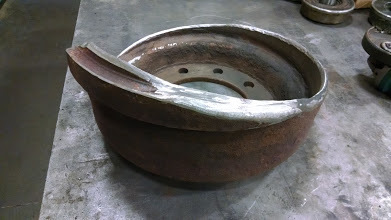 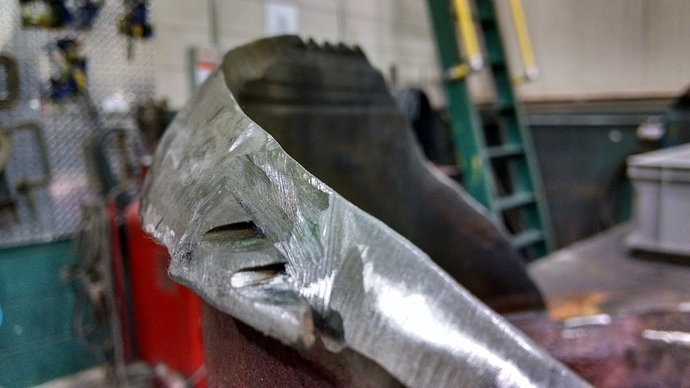 Good luck with the new blade idea. i was thinking on adding supports too the truck rim and useing that for the cutter chunker. Not sure if that was tried or worked or not.Actually the drum like you are grinding would be harder steel i suppose,and take longer too dull.

I can’t help but notice that you put your bevel on the outside of the cutter edge, while I believe everyone else has sharpened the inside. I’m interested to see what kind of effect this has.