Right, I have a New Project well underway. Five or six years ago I built my first woodgasser with the indispensable help of Mike La Rosa and others on the yahoo forum including Max Gasman. That rig was an '78 Mitsubishi four cylinder pickup which had a carb until it melted. After removing the melted carb from the intake manifold, we (my son and I) built, from the verbal description, a Max Gasman gas mixer. When I built my next rig, the Prehistoric Van, with an old 351 Ford carbureted engine, I used that same mixer mounted NEXT to carb using only ONE gas peddle.
While I was still running that van I bought Wayne’s book, and it changed my life! After a few thousand miles more on the Prehistoric Van, I finally got everything rigged up in a ‘91 Dakota and I was stylin’ on woodgas!
I don’t know just why, but it actually got boring driving up and down the highway every day with little or no trouble and never stopping for gasoline. I knew something was wrong!!! Last July, I went to a Rat Rod car show in town. There were a bunch of guys who actually liked little, rusty, old pickups! The only hitch was that they all had to have a big engine in 'em. Now that made a connection with me.
So I got to work and found a little, old, rusty '46 Chevy truck. I thought I would put the cab on my Dakota, but that wasn’t going to happen. So I took the cab and box off the old Mitsubishi, and mounted a 350 Chevy carbed engine in there. Then bolted the rusty Chevy cab on there and took it for a spin on petrol. Now, there was a little truck with a big engine! Just right for woodgas.
This winter I’ve been getting all the woodgas components built and set in place. The Woodrat is parked in my wood shed with a plastic extension out the door. But I’ve got the chrome headers,and the dual exhaust tacked up to a sweet heat exchanger, and a fancy new copper cooler, and a refurbished cyclone… And even a brand new Max Gasman gas mixer where the four barrel carb used to be. Wait 'til you see it. I’ve got some pictures on my phone. I’m hoping to get her going for the Rat Rod show in July.

Very cool John, can’t wait to see it. I can’t wait to get back to building rats. I put mine on hold when I got the wood gas bug. Eventually they will become one but the daily driver has to come first. We need to get a wood gas get together going up here in the northland.

Jim, where are you up here? I tried getting something going a few years back, but nothing came of it. Bill Shilling wants to get some Northern connecting as well.

Thanks, Brian. How do I add pictures on this “new” site?

Drag and drop, cut and paste, or the “up” arrow upload button.

that sounds like a great project john cant wait to see those pics.

I scrolled to the bottom hoping to see some pictures John. 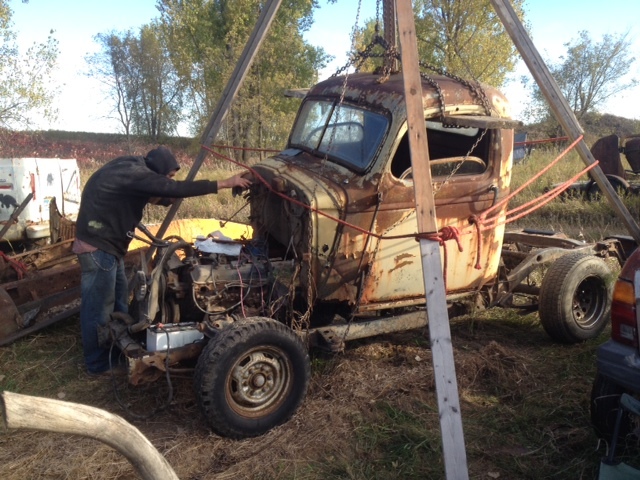 Is this too big? 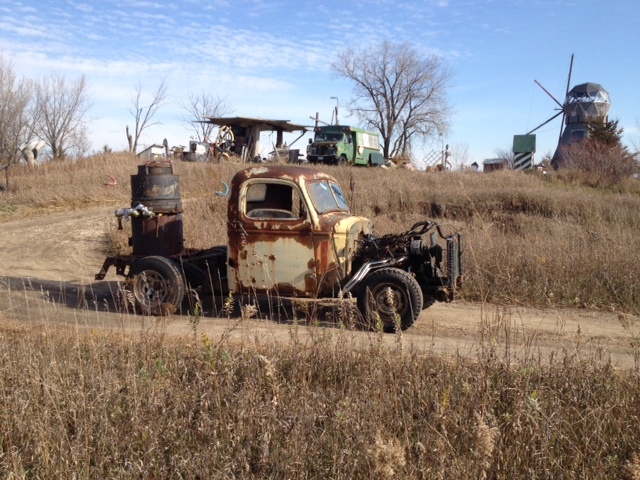 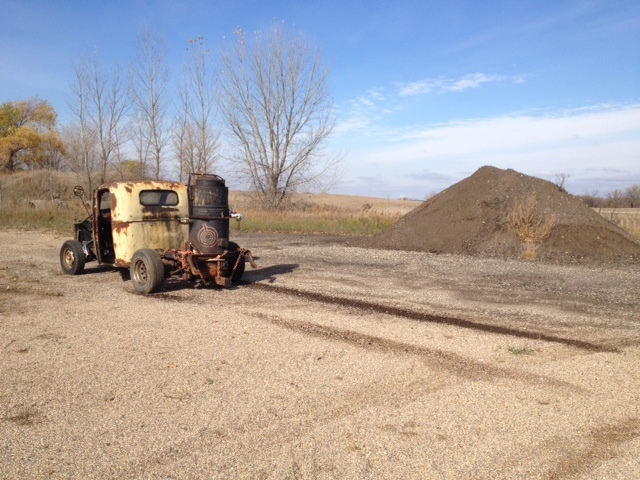 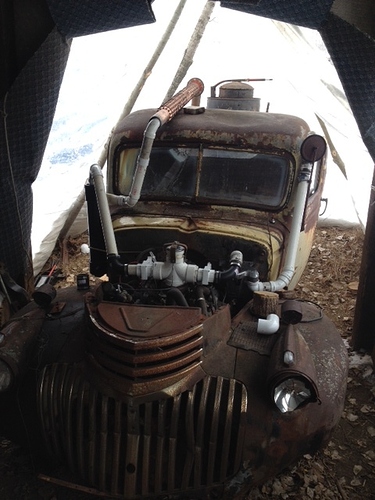 This is sort of how things look today. Still waiting for snow to melt to fasten everything in place.
I don’t dare weld in the wood shed! You can see the gas mixer and the fancy copper cooler. Both are untested. One thing you can’t see is the gasbag…

John,
Now that is so cool, it hurts. I want to build one. I have friends that have them, but they are not Gasified. I have to show them this, for sure.
Keep on Gasifiing.
Bob

John that is just to cool. That truck has many story’s to tell and thanks to you more to come. They just keep getting better and better. My rat is a car butreally want to do a truck, with a gasifire of course.

Jim I believe I got that old Chevy somewhere not far from Sandstone Minnesota. Underneath the cream colored paint it’s olive drab paint. It was still running in 1972.

Another first in wood gas, that looks like TOO much fun!!
Also looks like something out of a “Mad Max” movie. Thanks for sharing.

Nice! When I retire, something like that will be my daily driver. That’s living large in my book.

I wanna here more about that gas bag John. 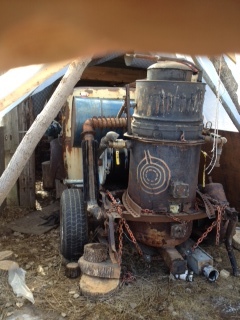 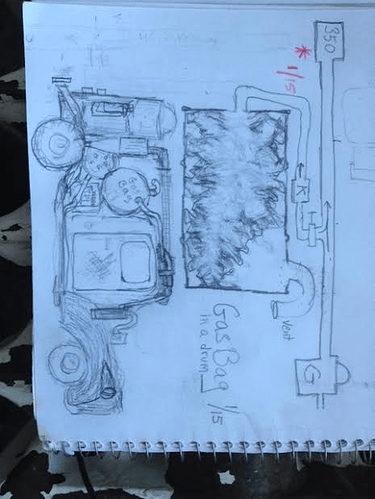 O.K. Jim, here’s the schematic. In the main line running from the Gasifier to the 350 there is a T. At the T there is a Kirby. ( I suppose a bilge pump would work). The Kirby sucks some woodgas from the main line, sucking time depending on either the valve or a dimmer on the Kirby. The Kirby sends the woodgas into the gasbag which is inside a big tank- one and two thirds 55gal. drum. The gasgag is able to inflate because there is a vent in the drum (not in the gasbag). When bag is full, valve is shut and Kirby swithed off.
When screaming away from the hypothetical starting line, the valve is opened to allow the engine to suck the stored woodgas into the stream of woodgas coming from the gasifier, hopefully providing about a two second long kick in the ass, enough to get moving. 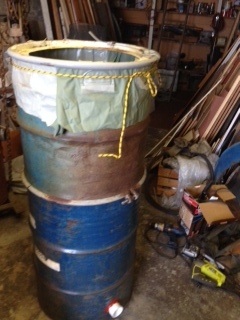 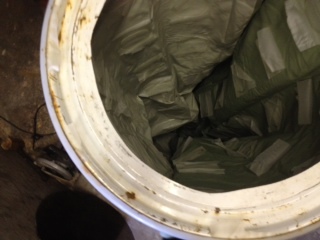 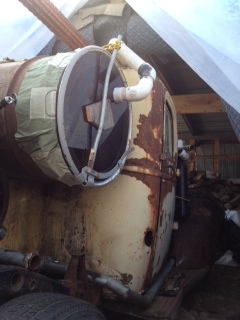 Hey that’s cool John. What is the bag made from?