I wanted to make some progress before showing it to you all but l came to a bit of a dilema l wuld realy like your opinion about.

l am building a 8" wood gasifier for chunks, Imbert(ish) style. When l was on a hunt for materials l found this in one of the stores: 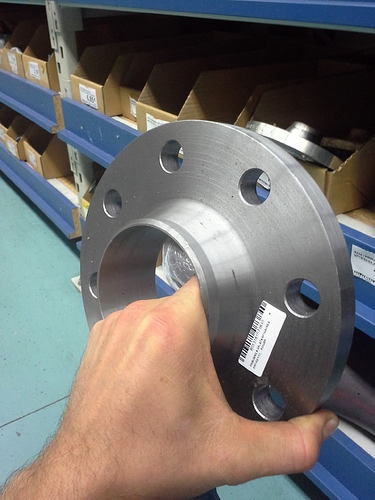 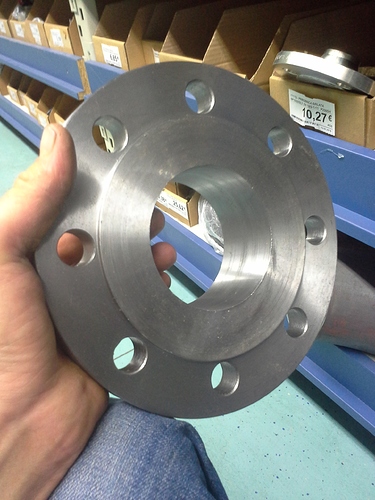 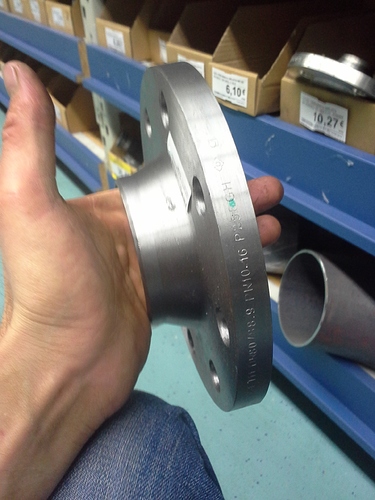 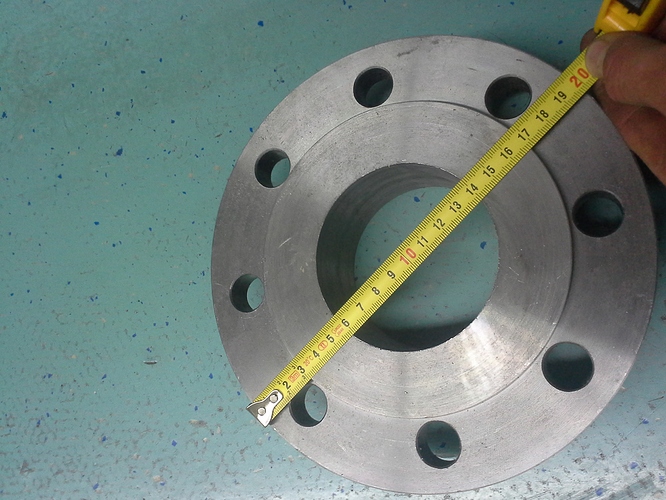 20160811_132015.jpg2560×1920 1.5 MB
It looks like it is made for a wood gasifiers restriction! It fits tight in a 8" firetube. It is a SS flange. The holes wuld be welded.
The question now is do you think this will work well? My main concern is the big mass of it. I am afraid it will take to long for the gasifier to get to temp with all that mass sucking the energy.
The original plan was to use this 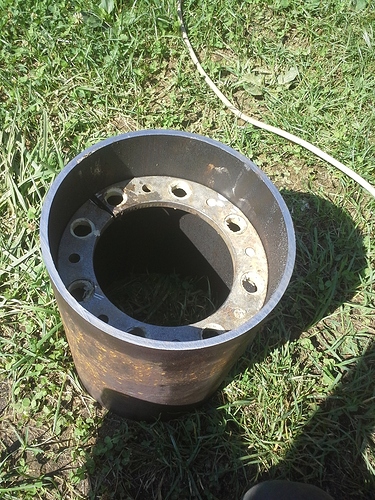 Have a good day,
Kristijan

I’ve been waiting for this thread.

Are you using the whole 8" dia for reduction? If not, just put a smaller donut on top of the reduction tube and let the void be filled with ash.

Can’t tell if it’ll be a heat problem but it will ad to the weight.

That firetube looks sturdy enough for a WK.

Well here it is. My vaication starts tomorow so just one more night shift and the welder will start buzzing

Reduction will be the whole 8". l will try a bit of a different way or insulating it.

The weihgt is allso a concern. The tube it self is 10kg. Thick and heavy, shuld last for a few miles

Reduction will be the whole 8"

I remember DJ mentioning reduction volume should be about 1/3 (if I remember correctly) of the oxidation volume. Yours would have to be very short/flat.
Your gasifier - just saying.

I would suggest using large bolts to hold it to the flange you made . These will accumulate ash and insulate things a bit and allow for change and modification. . where are you bringing in the nozzles ??? Thanks, Mike LaRosa

I am thinking of puting a double throat system in it, injecting secondery air in the reduction. If that doesent work well, lll just put a different kind of reduction in.

Mike you mean like a shelf to hold ash on the flange? The nozzles will be mouned on top of the firetube to give a 60° slope to the reduction.

Reduction zone is just that… not for oxidization.

You can build multi level nozzle systems… they do work. It’s kinda what I an Stephen do.

I am thinking of puting a double throat system in it, injecting secondery air in the reduction. If that doesent work well, lll just put a different kind of reduction in.

Interresting. I remember Max talking about some WW2 systems injecting air as low as restriction or lower, and it worked. It doesn´t make sence to me but I have limited knowlidge.
Doesn´t double throat usually refer to pyrolyse/oxidation level?

Here seems to occur a lot of misconceptions:

There were 15 different patented models!

Upper throat, where the nozzles are situated, lower throat = the restriction.

In this cast one-throat type, all the air is blown trough horizontally blowing holes at the narrowest spot of the restriction.
This restriction piece is broadening downwards as a cone.
A bit below this cone is the turnable grate.

A real “heatlooser”! But compact.

For oxidation upwards, and for reduction downwards, seemingly; reduction in bit size, especially downwards can compensate for a physical space, if you win the battle against ash!

There seems to to be two ways to go:
Physically bumping grates, sieving grates or increasing the gas velocity in the ever smaller “grains” of char.

A competely other approach is “cyclone gasification”…

Now, in a laying bed, the increase in volume upward seems to be free from jamming any mechanism, when using a protected slide for switching nozzles at different heights.
In a double heart wall a rotating (part circle movement) slide can switch different nozzle groups on and off.

It can be tangentially moved with a rod laying in a cylindrical flat “grinding stone”-formed slice, connected to an outer double cylinder.

Between the two double cylinders ash is giving insulation.

The push-pull rod is taken out throgh a short “tunnel”-tube from the “grinding-stone” perphery through the outer wall of the gasifier, flexibly and gas/air tight!

Where do you come up with all this stuff??? I am aware that there are server patented types of gasifiers coming out of WWII. From your description, it seems to me that we are all following the GMR paten — [quote=“gasman, post:11, topic:2677”]
Upper throat, where the nozzles are situated, lower throat = the restriction
[/quote]

I take it that this design came out as the best all round design, but are there any significant benefits from the others that we maybe should be looking at. The single throughtt appears to be very simplistic and the “stone type” plate seems like something the driver has to keep playing with durning a drive. Interesting information, though. TomC

Arvid l apologise with reduction l ment restriction. I will be puting secondary air on the restriction.

Max do you have any documentation about that topic? I didnt realise this already exists untill you mentioned it.

The tangential rod, for switching the nozzle groups slide can easily be done by switching solenoids, switched at the dashboard.

Only lower nozzles with smaller tip-circle-diameter and smaller holes, when you arrive to low-speed town districts and the highest on, when you come out of towns to free roads…

“There is nothing new under the sun…”
If you mean Imbert FSD, look at patents in Paris, beginning of July 1944.

And this is primary air! The motor gets the secondary air…

Max/ Kristijanl Could it be K is talking about something like this. I know I posted it one other time and you said it didn’t come from you Max, but somewhere on my notes I had your name written. 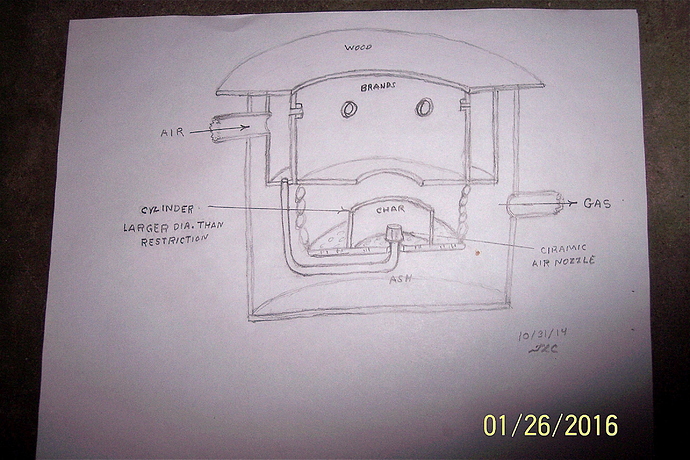 Tom, Bruce has been living with a nice woman for several years …I hope it is her :o) WE stayed with them last year … Mike
Still have 3 broken ribs … slowing me down …

Kristian, I do something similar to what you describe… I have an upper nozzle circle and then one more lower nozzle pointed at my hot well, like what Stephen Abaddess does with his Victoria gasifier. Look around at his posts he pretty much showed everything he’s doing. My systems are based on his hearth ideas.

I’m sure I’ve posted pics hear of my inners (hearth build up) but not my preheat and grate.

Tom your skech looks interasing too but l think it has one drawback. Ash.
The plan is to put nozzles on top of the restriction to make kind of “doors of hell” for the tars and other unwanted things. Just a portion of air will actualy go there, most still doeing on the main nozzles.
In wich topic did you post them Arvid?

Had some progress today but this whole idea got me thinking. I was planing to put a 3" restriction in for a start, but l think this wuld be to small for this sistem, becouse second sets of nozzles shuld burn more charcoal, eventualy leading to s cavity betweed oxidation and reduction zone. Any thods?

3"restriction would be ball park.