Hi KristijanK
Your engine appears to be a belt driven dual overhead cam version. The FIRST step for timing belt service would be to remove the air cleaner box for access.
Do this. Then reassess your available space then that could accommodate a “soup-plate” two single action diaphragms assembly; or a thicker “soup-plate(s)” dual action diaphragm. These could bell crank transfer force/movements. NEED to be engine mounted to follow the engine’s torque movements.
A revised air cleaner box CAN BE horizontal; and thinner, and sandwiched in. Air tube can be even rectangular in cross section. Also engine mounted to eliminate the flex coupling. (a bit, hiss, flow noisier - but no matter,eh?)
Pictures show no evidence of any sensors to the current air cleaner box?
Regards
Steve Unruh

Why didnt l think of that? With that big thing out of te way l will have plenty of room. + the belts shuld be replaced soon anyway.

l didnt quite understand… The diafragm needs to be mounted on te engine?

This car has very litle sensors (luckly) althugh timing advice might be hard to do.

The platform is complete. Well the paint and finetouching is still neaded… And the lights. 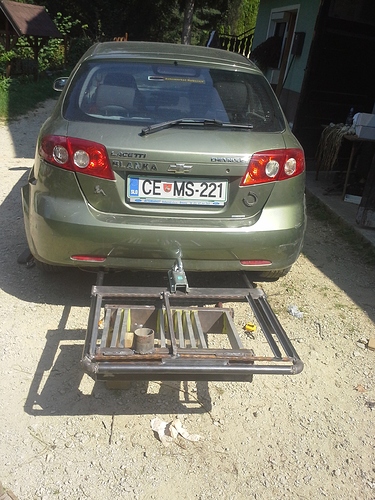 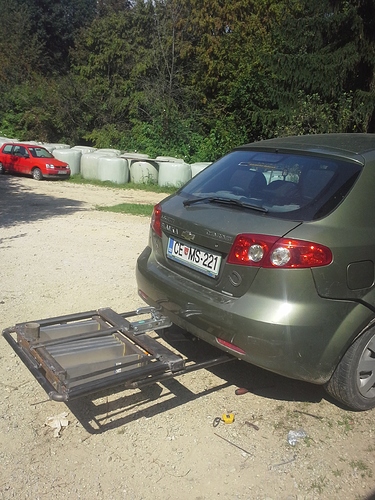 Steven’s remarks about the airfilter and access to the timing belt are excellent, and well timed!

Its syncronized flaps (may be on the same shaft or in tandem).

In tandem = individual parallel shafts with cranks, connected with a connecting rod.
Like the pulling wheels on a locomotive.
Equal closing and open angles. Equal throat diameters.

Connecting route to the current throttle body needs to hold up for vacuum! Needs reinforcement if the double-throat mixer is connected in series with the common throttlebody.

The mechanical operation of the two components in series needs attention.

If room allows near the intake manifold, a parallel feed is to be preferred.

Is there room to make the woodgas-mix intake in the other end of the intake-manifold?
That would make it much easier. On the left side. (car’s left side)

Is there room to make the woodgas-mix intake in the other end of the intake-manifold?

The two flap carburator is allso a tricky thing to obtain. As is all the other rusty gold… There is not one junkjard it the whole contry. The goverment did an exelent job at puting them away. They astabliched a company that buys all the scrap metals for a reasonable price, so junkjards are history. I am so jelous of you guys

The final look of the asembly; 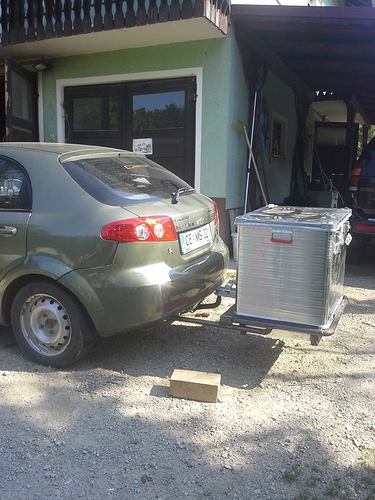 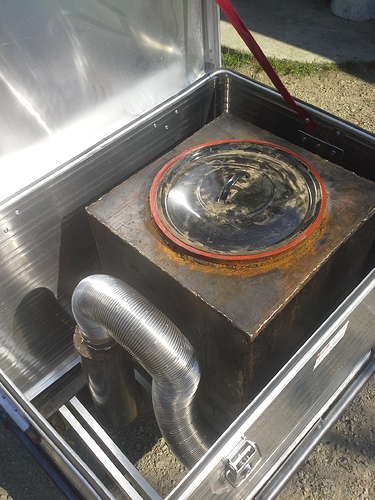 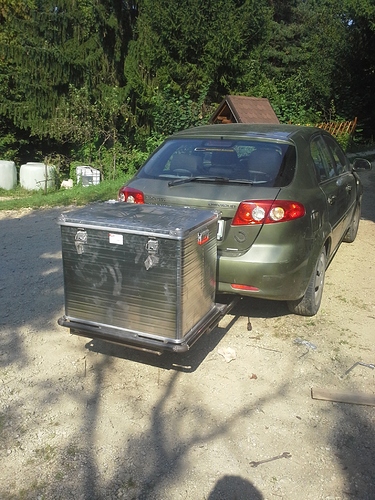 Does the rear hatch open at a wide arc so that the box cannot be closer to the bumper? Will you have to mount your license plate on the back of the box sometime? You are good at hiding everything!

In English some say pO-TAY-TO. Some say pah-Tah-TO. Same vegetable root.
Yes for a good mechanically rod connected control assemble you will want it mounted to the engine to couple/share all engine/trans torque movements.
I once saw an older fullsized Mercury V8 car with old soft motor mounts being engine hand revved by the mechanic from under the hood. Saw the old, worn, loose steering column mounted shift lever torqued, move down from Park to Reverse. As the car roared past me in reverse being chased by the mechanic I was able to reach in and yank all four right side spark plug wires. Sigh. I missed the ignition coil wire. I still have the fan scar on that hand.

Remote mounted using a housing sheathed cable system would work too. (then you get to fight housing cable drag on your low force system)
Regards
Steve Unruh

Hi Kristijan
great design
discreet aerodynamic enough, not too bulky
I really like.
what autonomy you plan to achieve with this gasifier?

Don l culdnt go closer to the bumper becouse of the lengh of the towbar and the trailer clamp. And allso the back door wuldnt open.
There will be lights and a third licence plate on the back.

Thierry the hopper holds about 10 kg of hardwood so in theory about 50km range. Testing will tell more

The plan is to make it look factory made as possible (becouse of our blue angels). I was looking up to this https://www.google.si/search?q=smog+pump&client=ms-android-samsung&hl=sl-SI&source=lnms&prmd=ivn&tbm=isch&sa=X&ved=0ahUKEwj2ku2P-uDOAhWLLMAKHTbKAl4Q_AUICCgB&biw=320&bih=508&dpr=1.5#hl=sl-SI&tbm=isch&q=thule+easybase&imgrc=grQ0Fe0BQbsbGM%3A

I culd just buy the platform but it is rated at 45kg max weight, my system weighs about 65kg so the bumps wuld realy be a problem. This one l tested jumping on it and it seems to hold well. Snow will be a problem thugh… front whhel drive…
Ill print some stickers with instructions and logos to give the homemade platform some factory stile. But shhh

Hi Krisijan , looks fantastic and nice and clean too , I understand about the stealthiness of the build , but wouldn’t a jockey wheel on or under the back help support it as your a little over the rated weight would help stop some of the flexing on those bumps .

A wheel is to eyecatching, and the thing is the Easybase costs 250€ ($280?) And lf l have to change it to much (wich wuld allso be ilegal) its alot cheaper to build from scrtch. My setup cost me 15€ to make

Allso the Easybase is mountedvonly in one place, the towbar. I dont thrust that so much. My is fixed on 3 spots, much more stable

Where will you hid your cooler. What is the flex tube (?) Made of?

Where will you hid your cooler

It is already under there Arvid. 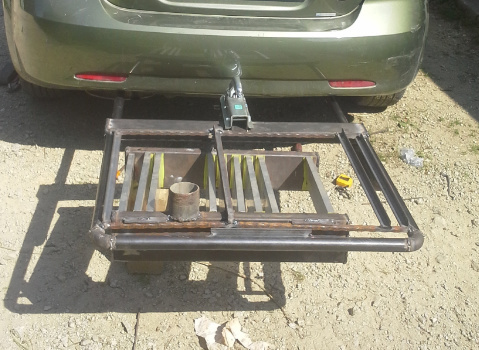 Ahhhh… so it is… clever… is it big enough? I guess we’ll soon find out

I see Don already anwsered that one

The cooler is about 1,5m2 and the platform is sllso a cooler, 0.6m2. The heat exchanger us about 1m2 and the 3" ss flex tube (the other question) is about 1m2. But like you have sayd, will see that soon.