I have found different terms for a third of a cord Bob. Here they are called face cords. In southern Indiana People I know call them Ricks. Just so you know what I’m talking about. I have never paid attention while cutting up limbs but if I use it to cut say 8-10 inch small trees or large limb I can cut about 3/4 of a face cord on a charge. The batteries for that saw are $170 bucks so I only have one. It is an Echo. I have an Echo 590 gas saw that has become my preferred saw over my Stihl as well. I was reluctant to spend the money for the battery saw but have not regretted it at all.

I used to use a 20V Chicago Electric recip saw for cutting up small stuff as well Don but then HF quit selling batteries for them and all I have now is a 12V Milwaukee that doesn’t really get the job done. I also have a Ryobi 18V 8 inch chainsaw but have never found it to be very useful. Luckily I didn’t have to pay for it. Gifted.

I have the Echo cordless also. It is great for limbing, but I really like my Husqvarna 460 Rancher for everything else. I used to have two batteries for the Echo, but I left one in the loader bucket on the Ford tractor and forgot it. Found it soaked after a 2 inch rain a couple days later. Don’t do that.

but the 20 buck look alike chinese batterys are junk, t

They probably are junk but you can replace the batteries. Batteries Plus will do it. But make sure you replace with what milwaukee uses. They weren’t the cheapest, but they were a lot cheaper if you cracked the case on the battery pack. It might be cheaper building/building a spot welder to weld the tabs if you have a couple.
They are only 17 bucks now, and I don’t see the ‘battery pack’ issue going away in the next 30 years. It is a great money maker to have a proprietary connector. But it could be beyond your comfort level as well.

Works super good for cutting roots before pulling stumps too. So far the jobs I used it for got done before the battery did.

I usually just cut stumps flat and drill holes in them, then sprinkle dirt in them. After like 6 months, if you knick it with a lawnmower a chunk will fly off. Even with the flying chunk it is still a lot safer and a lot less work then digging and swinging an axe around.

While on the topic, anyone has experiance with stump remover? Aka potasium nitrate. Its supposed to rot stumps in 4-6 weeks wich sounds too good to be true.

I got half a acre of young growth forrest (4" ish trees) on what used to be the best feald on the property. Hundreds of stumps. I thod of geting hevy machinery in but first its costly and second, it took 3 years to establish good fertile soil again when l did this on a nother feald. Im thinking to cut them flush to the ground and drill them with stump remover, then just plant something on the bare ground. Stumps shuld rot well under the cover of a crop.

I have never used stump remover. but I have cleared several young growth fields by cutting and then just disking over the stumps till they root out. Button do that you have to have a tough disk.

What kind of trees? Deciduous or evergreen?

This is not a tool for grinding stumps, but for what grows from stumps, I’m sorry I don’t have an attachment for this job as Fergie can’t wait for me to put him to work. 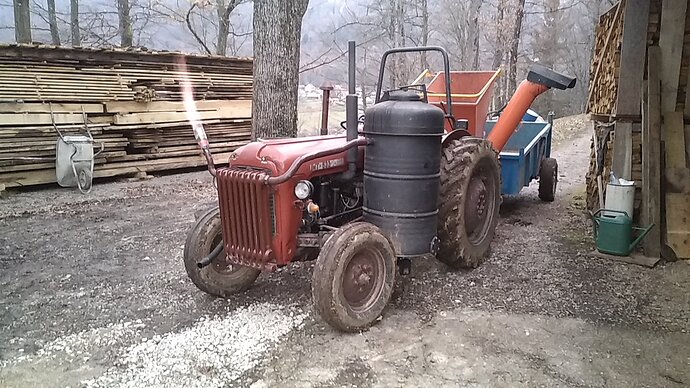 Are you replating the trees you are removing in the unfarmable places for future tree harvesting on your land to make lump charcoal and engine grade fuel ?
Bob

Tone and Bob, l harvested enaugh wood for a year full of charcoal buisness from this feald alredy. Its what payd for the roof on our house. Now whats left is stumps and 6 feet tall shoots that l ment for copicing, harvest again in about 7 years. But like Tone sayd, priorities. Since the price of grain went sky high lm forced to grow my own.

The 20ish acre land we bought was 90% fealds and hayfealds just 30 years back. The rest was forest. Since then, the numbers literaly turned. I will start to decrease charcoal production this year, not to overharvest but when the now young growth gets mature in a decade or two there shuld again be an abundance of wood. Untill then, l get enaugh fuel from clearing and weeding in the woods.

Since the price of grain went sky high lm forced to grow my own.

You should look at ultra shallow tillage. I don’t know if you can replicate it with the equipment you have but it keeps the topsoil and all the soil biology more or less in place so you don’t need as many nutrients, and reduces compaction, and topsoil run off.

Since you do have smaller equipment you might be able to do intercropping, which would be planting two crops together. like a legume and oats kind of in small strips then the oats can get nitrogen from the legume. The trick is to try and build the soil and not disturb the earth biology, then your soil can hold more water and nutrients, with far fewer fertilizer inputs. You end up with higher yields at a lower cost for a long period of time. If you want help, I can try to help look up compatible crops.

Regarding the cost of batteries for portable tools:
When we used to make maple syrup, the battery on my 12 volt electric drill would drill about 50 taps on one charge. I simply took an old battery apart and hooked wires to the contacts. Then I put a garden tractor battery in a backpack and hooked it up. Lasted all day!
These days, I can get all the good used Li-Ion 18650 cells I want from old laptop computer battery packs that I get for a cup of coffee at a local repair place. (3 of those cells make a roughly 12 volt battery, 5 of them for 18 volts, etc…)
In almost every case, only one cell out of 6 or so in the laptop pack was bad. So I can make up battery packs of just about any voltage I want. Then I go to my growing stash of “Walwarts” and pick out an appropriate power supply. You can buy a matching “BMS” (Battery management System boards (example:3S 10A 12V Lithium Battery Charger Protection Board BMS Li-ion Charging ModuYJzo)
for a little as USD$2.00 on Ebay.

Are there other neighbors around you that would need their woods cleared out of small trees?
I hear you on the price of grain. We have a type of wild oats that is planted in the lands all around us. We are in a area that you have to water the crops. But this grain grows like weeds they planted it for a cover crop and boy did it take over. Of course no one harvest it and it just keeps replanting it self over and over again in the wild. I have thought about harvesting in wind rows with abattery powered hedge trimmer into a bag. Then cut the stocks down for hayfilter material. I am sure the chickens would like the grain.
Bob

Started seeds today. Just cold weather crops. Beets, kale, lettuce and parsley so far. I’ll do cabbage and carrots next. I can barely believe it’s that time again. When you are old, days are like blinks of the eye.

Amen to that Tom, time seems to be just fly by now. It seem to me to get out of high school was a life time wait. 52 years later, my it went by quick. At 70 now I hope the next 40 years or so are great.
Bob

Its what lm experimenting with. I got a tractor rototiller and since both it and the tractor are about 1m wide its great for making strips. I rototilled in low speed so the tillers blades just kinda choped the surface instead of pulverising it and l set the height to only maybe 2". I sew a 1m band of barley on bare ground then l went over it with the tiller, wich burried the seed in nicely. Next strip l sew feald peas the same way. And it worked! 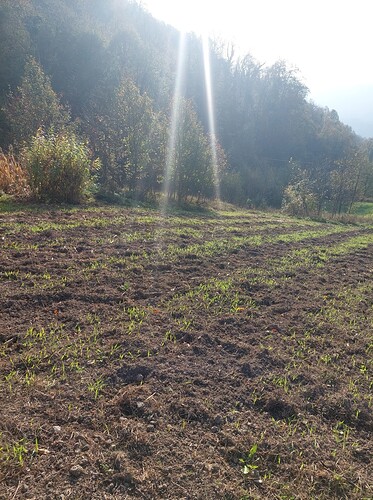 What you may have noticed is the barley sprouted great but not the peas. To my “surprice” the peas seem to atract pigs and our delicious friends dug out each and every seed

planted onion sets now… but next year l wount be pasturing pigs anymore after winter crops are down. Leson learnt

I have thought about harvesting in wind rows with abattery powered hedge trimmer into a bag. Then cut the stocks down for hayfilter material. I am sure the chickens would like the grain.

Get one of those battery hedge trimmers and a bigger battery, mount it one of those garden carts or hand truck with the big 14" wheels that go over curbs easily.

I like the idea of pushing rather then pulling, but I am not sure how you would keep the blade level without more wheels. and make sure to use grease on the blades, and it might need a fan for the motor. But anyway thank you for sending me down a different rabbit hole of things to think about.

Its what lm experimenting with. I got a tractor rototiller and since both it and the tractor are about 1m wide its great for making strips.

That is almost exactly what you want. I would probably use a roller on it just to pack the seed in tighter for better germination. A cultipacker is what they use commercially, but a 200l barrel rolling on it’s side would work well or a lawn roller, I have seen old water heaters used. You can use water in it for extra weight. It can be towed right behind the tiller but that can also be a pain in the butt when turning.

i don’t know if you even have to get that deep. I may have opted to go shallower. You have far rockier soil then we so it is hard to tell.

And it sounds like you need to replant the peas then the hunt the pigs so you can eat bacon all year.

Not specifically where where I am but we have a wild pig problem too. We can shoot them all year with the right license. Which is basically a reason to have a gun at the time you shot it.

But you can also trap them for bacon all year. Wild pigs (also known as wild hogs or feral pigs) are not native to the Americas. Brought by early Spanish explorers, they have now spread across the United States.