I have never seen a small scale log gasifier and wondering if this has ever been attempted in recent years. Is it even possible? I have some ideas kicking around to build one, but am reluctant to try as it would seem like some one would have done this by now and have it working.

Hi Matt, Hugh Wilson In Tennessee (maybe Kentucky) built a gasifier to run on stick wood. It ran well and he posted quite a few pictures on one of the yahoo groups. I can’t recall if he was running a pickup on it or a corvette. He dropped woodgas for a while to build hovercrafts and start a business with a hovercraft track on his farm. Were you in Argos this May ?? I don’t recall meeting you. I did see some of your stuff 2 years ago there. Looked good to me. BTW, I had nothing to do with that BS on the yahoo woodgas group. Laren gets finicky when someone tries to draw off part of the group. He outright banned Chris but we have seen more progress here then there of course … Good luck with your business. Hugh’s hearth was unique and he had to make a few mods to get it to work right. The sticks were laid in horizontally. He built a huge MEN unit decades ago but got no takers when he tried to sell it … I have one gasifier here that I designed to take fence posts and the such vertically. My daytime phone number is usually 608-623-3000 if you ever want to shoot the breeze or pass some gas :o) … Mike LaRosa

Yeah Im guessing it is the reduction that will be the challenge? I get this a lot from people why cant I just put logs in it. lol

Yeah the Yahoo group thing, when I got on there and read some of the post and in mho I thought it was very out of date. So i made the suggestion move it to a better interface. Ooops! So I later apologized for my comment and it fell on deaf ears. So no sweat there, I don’t have time for multiple forums anyways.

Yeah It would be great to have a chat with you. I was planning on Argos but funding and time got in the way. Hopefully next year I will have the chance I really wanted to show that FarmAll off. Ill see if those guys will be interested in going to the next one.

Good Morning MattR.
I have done both horizontal and vertical gasifing of “stick form” wood to run small IC engines.
Stick form being what I would call fine splitting of my normal nominal 18" / 46cm length woodstove firewood. This was split into irregular 4"x 4" /100mm x 100 mm cross sections.

As you said the pyrolisis and oxidization sections worked OK/fine. The REDUCTION conversion sections were always the problem area. Just two stickwood hang-ups/cross-lays, or a couple of burnt around remaining limb knot chunks will cause a gasses bypass channels to form. Then the upper sections CO2 and vaporized H2O goes past unreduced, unconverted to CO, H2 and CH4 fuel gases. Engine power then stumbles to 1/2 of normal expected woodgas power. Or; if under a load, often coughs chokes and dies. Shaking does not help. In fact seems to then just overstettle and flow packs other areas of the Reduction bed increasing the gasses bypassing channel flow problem.
Angled down into the lower oxidization/upper reduction Char breaking/poker ports work well. But that then that requires much involed Operator knowlege/skill/and winningness to use.
I know a couple of old codgers doing and willing to do this w-a-y up in the mountains off grid.
Works much, much better with easily burning down softwoods like fir/spruce and pines trunk sections without any limb/knot wood sections in the sticks. Chokes out on them with any attemp to use slow buring hardwoods like oak or even maple. Red alder processes good but much less power with a slower energy release and higher ash content causing more gasses flow clogging and needed cleaning out.

I once on another Site/Forum got a Unkranian memeber there to search out and put up links to 50-70’s Soviet/Russian forestry equipment wheeled, tracked and light rail that had raw fueled stick wood gasifiers. Thier wood forms were more European at 12"-16" / 30-40cm X 4"-6" 100-150mm. These did have active human Operators using top and side poker ports. Even larger less power expected IC engines ~200-400 big slow CID for 20-30 hp. More interesting for me was thier reversal blower top hopper venting to allow in hopper drying down of 40-60% wet, raw as cut fuel wood. VERY steamy and smoky emmitting. We could never do that now. Be many neighbor complaints for visible “smoke”.

All in all, in my experiences much better to spend the human time in fuel wood prepping down to at least chunk sizing to be able to then unattened 2-4 hour system run with less system metals killing waste heat produced and a average overall better quality fuel gas. Then you will get a 2X better wood volumn use per horsepower/kWme hour used.

Hi Matt,
I’ve been fascinated with these European gasification boilers for a good while. Here’s an Argus: http://www.youtube.com/watch?v=e2Eyzoki4NA

Not sure if this is what you meant or not.

These guys are in my back yard and were just up to the house for a demo.

So I am kicking around some ideas as they are interested in a joint venture.

i wish you much luck Matt. I’ve kicked around the idea a few times myself… just haven’t put anything on paper of burnt steel.

Has anyone tried mechanically breaking up the log once it has charred to supply the charcoal bed. My understanding is that if we don’t have the bed of charcoal the gas will be full of tar and useless to power an engine. Once the wood is turned to charcoal it is very easy to break it up. Getting unburnt wood broken down into a usable size is where most of the work is.

That is exactly what I am thinking. Some years ago when I started building automated machinery I worked for a turf harvester manufacture. This machine had a mechanism that would pick up a series of turf rolls and stack them on a pallet. How it did this was the mechanism had a row of spears on each side that would extend into the turf rolls. I think I could build something similar to this same design and build it so it would break up the soft char.

Here is a video of this machine in action, and judging by the 6220 JD vintage I may have actually built this machine. I did the electrical at that time

The hard part would be getting it to stand up to the job in the temperatures in the pyrolysis zone and have the strength.

That is part of the design, in retract mode the bars will be pulled out of the reactor. Then when it goes into a cycle mode they will extend in to break up the fuel. I don’t think it will need to run non stop.

Maybe something like this would work using pre drilled logs? 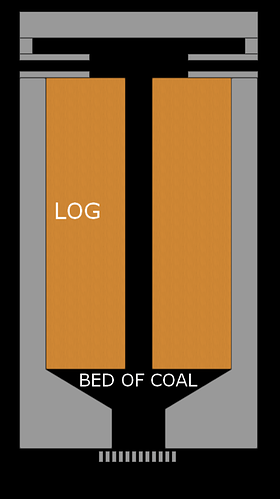 Nope this isnt going to work for an engine. There are wood boilers that have gasification process that run on logs. But this can not run engine.

Believe me if this could be done someone would have figured this out many decades ago.

My later integrated machines will accept logs. However there will be a processor on board that will grind them up into dust and turn them into fuel grade pellets.

grind them up into dust and turn them into fuel grade pellets.

Interesting! Maybe a pellet is a little like a chunk or a briquette? I wonder if a horizontal cartridge full of pellets, chunks or briquettes couldn’t replace a vertical hopper. This might allow the whole gasifier apparatus to live under the bed of a truck, freeing up cargo area. Has anyone done something like this?
Rindert

APL’s GEK IV’s horizontal feed fine fuels particles.
There is/was a Eurpoean gasifier designer D.J. made me aware of who was horizontal augur feeding UP from the very bottom of the gasifier to reverse zones operate for gas quality advantages.
Complicated. Lots of moving parts and motions requiring automation, power supplies, etc.
Then needing a broad skilled trained Tech to Diag and repair. Keep up and running.
S.U.

You could be the first