Maple Syrup; another cool thing to do with wood!

Came across a stainless pan for boiling down maple sap and built a quick evaporator from scrap. Not totally happy with it; the stove is undersized so it needed a blower to pump out enough heat for a rolling boil. It is still faster then the 5 gallon bucket and rocket stove combo from years past. Good thing since it is turning out to be a good year for sap. Just 30 taps but that’s all I have time to boil down… Next year: gasification evaporator… Any ideas out there?
David Baillie Thanks for the pictures, it is a great hobby the can pay for it’s self. made 150 gallon of syrup this season. had out 300 taps. Richard, bring some to Argos. I want some.

Hi Richard that’s a nice boiler… Someday. That’s great yield I’ll be lucky to see half that from my scrawny trees. Just for personal use, friends and family.
Best regards, David Baillie

We used to use wood to cook maple sap.

If you are looking for ideas for faster cooking, look here: 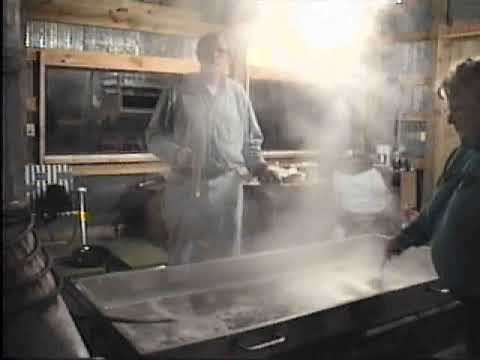 Well its been a while. The first one’s firebox was too small and it never drew well without a powered fan. The new one is slicker. the eventual goal is to incorporate a cone kiln in the bottom and an auger for charcoal removal. That will probably be next year. No idea of evaporation rate yet. Its pretty good though… The season is just starting. 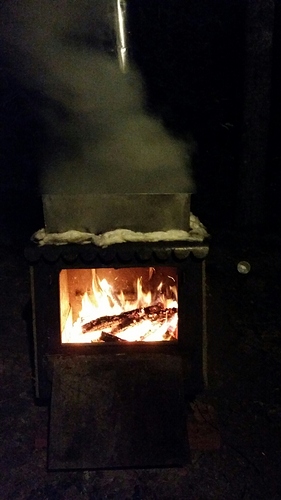 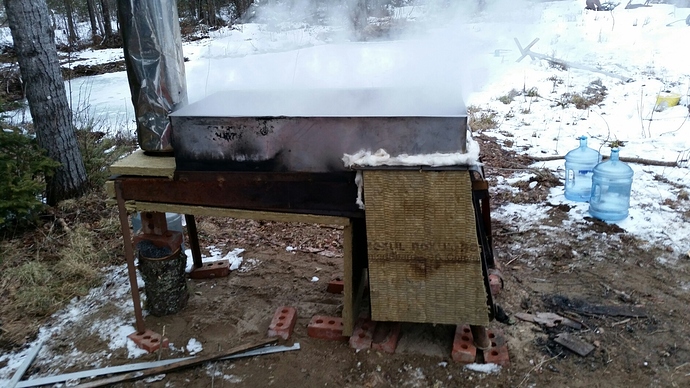 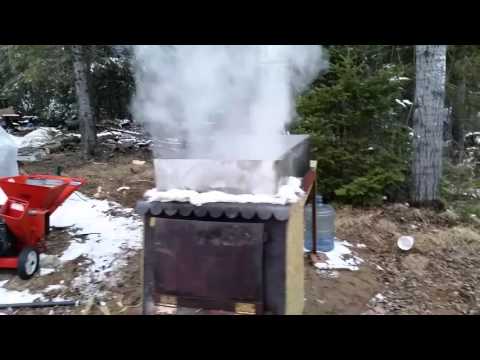 This is my prep station. Taking “waste” wood and transforming it into value added product; maple syrup. Everything is electric; chop saw splitter and chainsaw for eventual transfer to my charcoal genny. 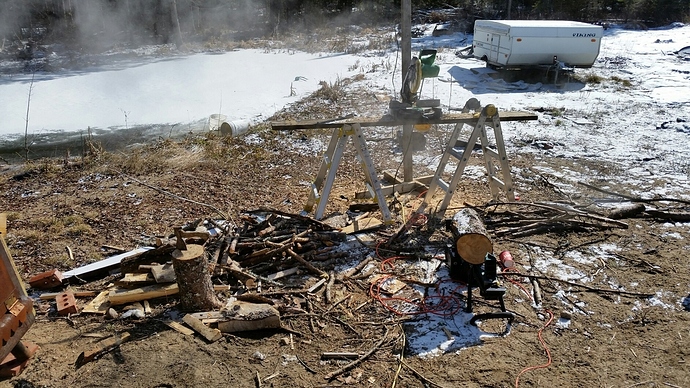 At the half way point of the season the count stands at 12 liters from 25 taps… hopefully more to come. First pic final boil down on the stove… next year tlud. Next all Jared up and 2 liter of calcium settling out to the left. 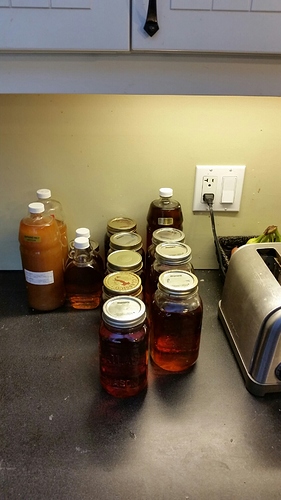 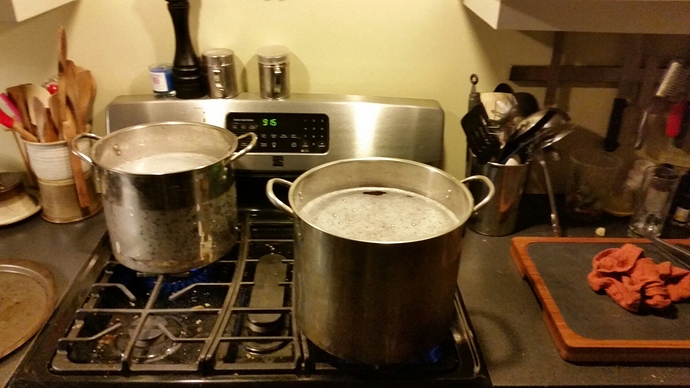 Looks like fun. 25 years ago my neighbor and I both had 30 tap backyard operations like yours. Now he has over a thousand taps, reverse osmosis, etc and I get my syrup from him. A few suggestions from my experience would be to do anything you can to keep the wind from cooling the rig, add dividers to create a serpentine path, and keep the level as low as you dare. Like you we used to finish in the house. Kept the air from getting too dry.

Funny enough we are looking at maple wood lots these days… since the pictures I’ve added insulating panels to the sides.
Best regards David Baillie

Thank you for starting this thread David. I really want to learn about making Maple syrup. Hands on is working well for me so far but any morsels of info I can pick up will be good. The new evaporator I made is working a lot better than the first one.
Some info I dug up on the internet said wind is good. That made sense to me after I seen commercial evaporators with hood fans. But maybe I’m missing something? I also understood the lower outside temp and a low humidity also helps the evaporation?
I want to make my own firebrick for inside mine. I was thinking using clay from my land and vermiculite to lighten it up. May be a bad idea, I’m not sure.
Can you explain that ‘calcium settling out’ you put in your picture?

Hey Bill some people call it sugar sand. It’s basically all the nutrients in the sap that come out of solution when you concentrate it to syrup. Usually you filter it out from the hot syrup using a felt or nylon filter. Personally I like to leave it in and let it settle out. After 2 days I siphon out the syrup, reheat and bottle it. The sludge left over I combine all together, reheat it at the end of the season and let it settle for a few weeks then I siphon the syrup off the top of it. My way is more labour intensive but the filters suck up syrup so you loose more; not good when you only make small amounts. Personally I think settled syrup is clearer then filtered it depends on the person. Some people even let it settle for weeks and it forms a hard cake in the jar bottoms that doesn’t move when you pour it. I grew up north of Ottawa in Quebec… we take our syrup very seriously.

honestly I’m an amateur but I come from good syrup making stock.

For firebrick you could try native clay and white sandblasting sand, try making samples and varying the ratio of sand. I made small sample sticks, and tried heating them with a propane torch, should be a decent test of durability and performance.

There are recipes online for firebrick I’ve never really made any.

Specifically bill a small breeze can be good to clear away the steam so fresh air not saturated with hot moisture is exposed. Doing it outdoors really should not matter since it quickly rises and dissipates. Too much wind and you loose too much heat from the fire to the air. I think your problem will be too much heat for your water volume. I would work out a drip system of some sort to keep you pan at least half full at all times. You will have to figure it out as you go.
Love maple syruping

I ran it yesterday. I used about a third of the wood than I did with the other one with about the same sap. I burned 12" long Tamarack the thickness of my wrist in the front half of the evaporator. I had the more concentrated sap near the flue because the heat is less intense there. I fed the fire about every half hour.
I am very pleased with how it turned out. I already have an idea of what I’m going to do for next year.
Thanks for everyone’s input here and on my thread.

What a beautiful day to boil… -9 c last night so the trees will probably take all day to thaw but sunny… prepping wood for the boil tonight. Picture of the boiler with most of its insulation in place; love these roxul comfort boards I still need to do the metal skins over top… 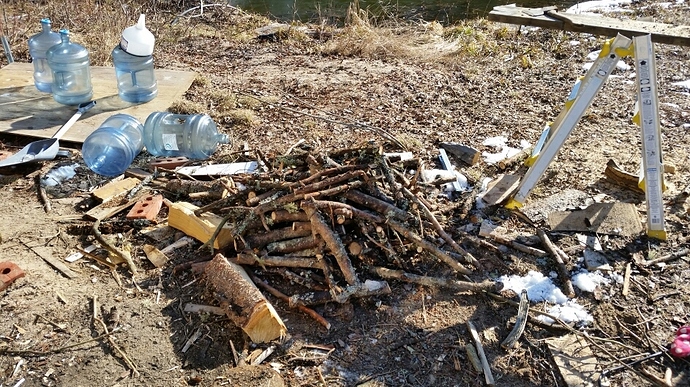 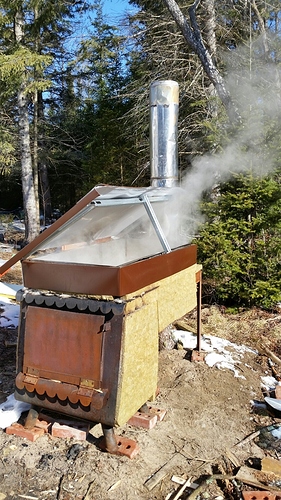 Nice looking evaporator David, It seems you have no end to the uses for that old earth stove. I gave $50 for mine 15 years ago and has been my sole source of home heat ever since. Tomorrow I will finish off my last batch of syrup here, My trees are budding , just a few running for the last few days and no more freezing temps in the forecast. I guess I will be right at about 4 gallons again this year. Not bad for only 14 trees. I need a bridge to get to where my mature maples are then build a shack back there and use the downed wood back there instead of my heating wood . I have a trout stream that divides my property. The state took possession of 60’on each side of the high water mark leaving me no access. A bridge is illegal so I think I will need a shipwreck, you know a pontoon boat wedged in there. since no bridges on the navigable water.

Here are some pics of my evaporator 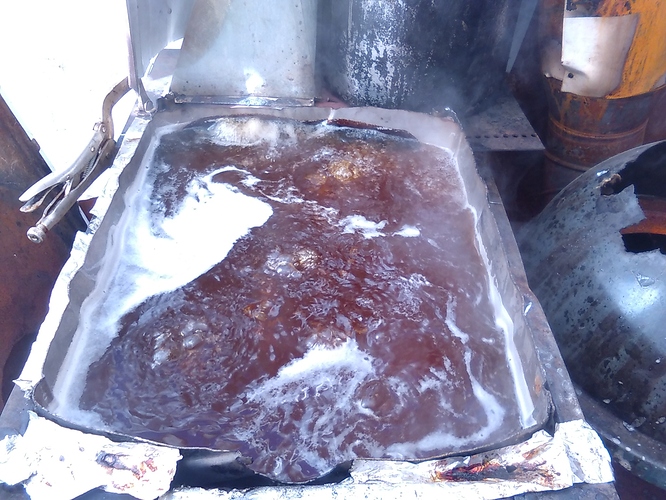 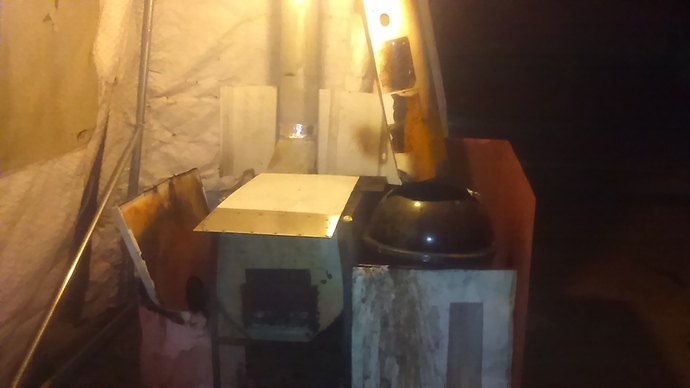 Your pan seems small but your yield is high so it works and that’s all that matters. I like the size of mine because I only boil 3 hours at night and maybe a few in the morning and I’m done. It’s a hobby with paid work always coming first. The boiler is really working out nicely. When the season is finished I will pour a pad for it and nestle it into the greenhouse for spring warmth and humidity. Then I want to auger out charcoal from it… lots of plans for that stove! It will be the logical end of a long process if I can make charcoal, heat the greenhouse and make syrup with one process…
David Baillie