A circa 1980 Missouri Gasification Systems S-80. Ed and Franklin cleaned it up, hooked it up, fired it up. Thx to Wayne Keith for timing advance trick to make the engine easy to start on woodgas.

The startup time on sawdust is AMAZING, a few minutes until engine grade gas.

Open the port stick in the torch, pull vacuum for a minute or two, start feeding gas, fire up the engine.

More pictures to come. Thanks everyone who keeps the fires burning. 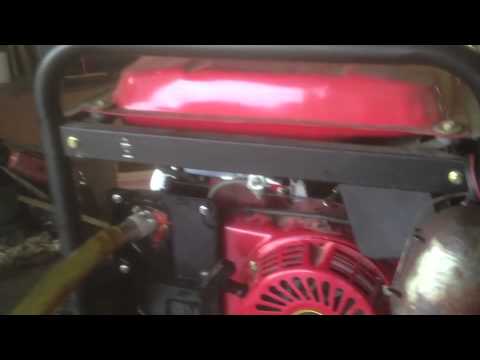 Glad you like it! Tell us what more you want from here, and we will do our best.

Is this a production unit? What is it rated at? Hp? Hours.?

The S-80 makes plenty of gas for the 13hp. I think we could choke the gasifier some for cleaner final combustion at 13hp. Ideally it should run like a propane forklift, with little CO production. We did not have a CO monitor in the space. Seat of pants says we were making some CO.

Not sure what you ask by “hours”? Sawdust per hour, hours before regular maintenance, hours we have run the resurrected system?

Also, FYI, external surfaces at full output were about a “two Mississippi” to the touch. In some places, it is hot enough to make a person aware, yet not so hot as to be dangerous.

Wow!
Hey DougB I’ve only ever seen a reprint of the the big millsized 6 cyclinder prototype.
First I ever heard of, let alone seen a production unit based in thier sawdust fuel work.
Neato. I like learning new things.
You’ve made my day!
Regards
Steve Unruh

Thanks Sir Steve for keeping the fires burning through the years! Otherwise this witty invention may have been scrapped.

I thought I sent Chris a pdf of MO Gas Systems for driveonwood.com archives but cannot find the link. It includes detailed information and drawings of a system by the designer, it not this particular system.

http://freedombiomass.com/News/Peak-Biomass-Energy-Research-1983 and go to the bottom of the article for download link.

Glad to make your day, as you have made mine a few times.

Thanks for posting the video, neat little gasifier.

On the video I spotted a nice looking red ford in the background.

I added the paper to the PDF section here: http://driveonwood.com/resources/pdf-articles/missouri-wood-gasifier

Thank you Sirs Wayne and Chris for carrying the torch.

Page 28 or so of the PDF is a good starting point for those interested in meat without potatoes.

Hope to make it to Argos this year.

Each one reach one, each one teach one.

Driving on wood is a hoot. Making electricity from sawdust is pretty fun too. Note the smile on Ed’s face ;~)

Hi Doug, this thread is taking off like a fire. I was wondering about run time. Is it a batch process of refill on the go? 13hp = ?kw. Thanks again for this new window of opportunity. And thanks for the links too. I’ll go there.

User refills and tamps down sawdust during running operation. We are just getting started, plan to weigh sawdust per runtime at full load when we find enough load to really work the engine.

13hp is running a 6500 watt generator. Not sure how much oversized the engine is, but it seems to have plenty of capacity on woodgas.

Hi Doug
Do still have your sawdust gasifier ?
I have a sawmill and produce about a ton of saw dust a day, could I up size your design for a big v8 ?
Thanks Patrick

Hey Patrick, a dry ton a day or a wet ton per day ;~) That is a lot of energy regardless.

Still have the S-80, have not fired it up in a while. MGS made these in three standard sizes up to SV-140, sized for a small V-8. They also built some larger custom units. The design is pretty plain jane, no instrumented monitoring, bells and whistles or idiot lights. Just pour in sawdust once in a while and tamp it down.

A huge advantage of this design with sawdust is fast starts from lighting to good gas. A big disadvantage is not everyone has sawdust.

Conceptually the S-80 is a lot like the WKG. Just slightly different port, choke, and grate configuration fine tuned for sawdust fuel, and engine size, wrapped in a rectangular box, that also handles the cooling, cleaning and final filtration. We added a final final hay filter like Wayne’s after a stuck valve or two.

Hi Doug
Could I bother you to do a sketch of the unit, specifically the fire tube. If possible a walk around video of the unit, with all the doors and holes open, and try explained the path of air and gas?

Would you rather have an original? I hesitate to share more details of “not my design” with the world. MGS was doing remarkably advanced work for the day, even for this day. IMHO they deserve to make a little profit for their innovations. What engine are you wanting to run?

Have you studied “Missouri Wood Gasifier”? I think it is downloadable from this site. If not, LMK and I will send it to Chris so he can make it available.

Have you had any contact with Raymond Rissler, the alleged designer of this system? Has he ever expressed any interest in producing a commercial unit? It would be interesting to hear his take on all this.

“Alleged” designer built a bunch of them commercially, and for researchers. MGS could build a bunch more, if there was a market. Raymond is a great pleasure to visit with, just like Sir Wayne. It is far beyond interesting to personally share their insights, a couple of amazing individuals.

Yes to answer both questions.