I put this in the charcoal section because a batch tlud would be a nice fit for this plus make charcoal for your charcoal gas producer. It also looks like charcoal could be used as an absorbant inside the icyball.

This is is a batch fired refrigerator.

This is for everybody to post ideas about absorbant refrigeration, not just me…

Here is a link to the army study…

Jeff, I worked in R&D for motorhomes and also took motorhome caravans to Mexico and Alaska for 10 years. We had our share of refer problems. I’ve always considered the simplicity of the ammonia-absorbtion units to be idea for simple refrigeration. The Servel was the pioneer years ago. The Dometic units just have a little chimney with hot air flowing up. It seemed like it would be so simple to use wood to supply that bit of hot air. The “icy ball” idea looks like it would be easier to control to avoid over-heating. So many ideas to follow up on, so little time.

My thought was always that you use the tlud to heat up a water reservoir and use the hot water to provide the hot side of an ammonia fridge. Maybe water would not provide the temperature differential necessary maybe hot oil? Just my own ponderings about a future project I would like to explore.

here is a link I like. Of course for what you are suggesting replace all the solar collector part with a heat exchanger and a tlud…
http://www.free-energy-info.com/P13.pdf

Icy balls ( invented by a Canadian BTW ) and ammonia batch systems always take me back to this fine film and the lessons it has to teach us.

humility? One of my favorite cautionary tale in movie form.

Started raining so I thought I would get a welcome rest, cashew nuts, coconut milk and gaze out the window… Wrong…! 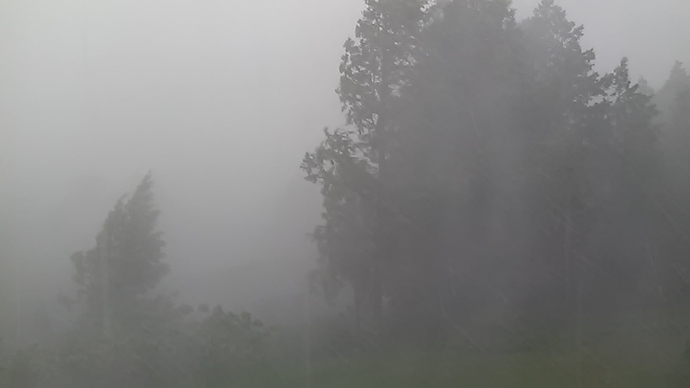 Yes, ammonia is hard to buy now because it can be a blast. There is a cooler that uses water and zeolite. There is another scheme that uses charcoal and alcohol. I guess the alcohol could be a blast or even water to steam could go bang. But then again we play with CO and fire… The right size tlud would add a safety factor.

http://crosleyautoclub.com/IcyBall/HomeBuilt/HomeBuilt.html
here you go build your own icy ball.

hmm that zeolite one looks interesting… Heather prefers when I avoid things that can go boom or poison us. She likes the film as well but its not a compliment when she notices similarities between me and Harrison ford’s character…

David, yah I did spot that. I thought I’d start with a extra small experiment with charcoal and alcohol or water. Just to see if I get some cooling.

I worked in R&D for motorhomes

William, your worth your weight in gold… I’m thinking about building a tiny house kind of like how boats are built. I gotta go… Later.

Mr. Jefferson Davis, I can tell you a fair bit about motorhomes and tiny houses. GOV is down on tiny houses because they don’t generate enough property tax.
The problem with build-your-own is weight. There is so much temptation to build it good and strong. The debate rages on; Tiny House Weight Debate - MiniMotives
“Commercial travel trailers are designed to be lightweight and
aerodynamic. Tiny houses are typically built from heavy building
materials, like normal houses. This can make it much more comfortable to
live in year-round but every foot in length adds-up and increases the
requirements for the trailer and tow vehicle.”
http://www.tinyhousedesign.com/road-limits-for-tiny-houses-on-trailers/

I’ve seen some of the builds on youtube that would be undafe going around a turn at over 30 mph. You can get portable office trailers for really cheeeeap. BUT, they aren’t cute. The office trailers are usually very well built. Cute is nice but, you must keep your center of gravity reasonably low.
The first question is; where are you going to put it and how often are you going to move it? If you are going to move it very rarely, build it a bit bigger and just pay somebody with a heavy truck to move it. That way, you don’t have to have a huge tow vehicle.
Houses are made to be static and trailers are made for dynamic situations. The longer your house is, the more you have to worry about flexing. That is why so many people build on good, rigid bus chassis. It is difficult but, it is possible to build both light and strong. The Ultravan was powered by a Corvair engine. The Cortez was powered by a slant six. There was even a coach powered by a BMW diesel enging from a car.
There is a TV show about tiny houses; http://www.fyi.tv/shows/tiny-house-nation

. The Dometic units just have a little chimney with hot air flowing up.

Maybe engine exshust could be used.

William, I would tow it with my ihc 300 utility. Could move it by the pond or in the woods for shade or tilt it into the suns rays. Or if the GOV cried I could move down the road on to another lot and then back. If I was going down the road I would build an ultra lite. For my self I would like to keep it to 12 feet. Just a box, no fancy dancey.

As a builder of houses not tiny homes those shows drive me nuts! I admire the desire for simplicity but nowhere around here at least can you legally park one. They are limited to trailer parks or a secondary structure on someone else’s land; they never mention that on the shows. I think I would buy an existing trailer gut it and build it to my specs. kind of like an undercover tiny home but no hipster cool factor though.

Years back on Alibbab there was a Chinese outfit selling a hydrogen loop Amonia refridgeration system that was powered ** the heat of a diesel engine!!! **

It was intended for fishing boats, but I can amagine alll kinds of uses for such a system.

Wow, water is king… If forgot to mention that during the storm there was icyballs falling from the sky.

Love the solar link. It mentions water as an excellent refridgerant, but what absorber for it? In the case of sweat, or a swamp cooler it is constantly added and depends on dry air to absorb. But what of a closed system like the ammonia ones.
Always wondered how those RV refridgerators turned heat into cold, now I ;know. (Kinda)

As far as I know water is the absorbant ammonia is the refrigerant in the closed ammonia fridges. They are using a calcium salt as absorbant in the solar link.