Well, I’ve decided to post a few pictures about my new project ;a charcoal tractor. The tractor is a Ferguson tea20 mechanically a near clone of the ford 9N ( or vice versa depending on your loyalties). It uses a natural gas tank (junk of course) with a gasketed top lid, exhaust cooling, air intake from the bottom. This one has a refractive lining in the bottom cast in two parts; the nozzle cast into a yogurt container with a 3/4 inch dowel for the hole then the tank lining poured around it to hold it in place. With any luck when it wears out I will pop it out and drop in a newly cast replacement. Then it enters a cyclone (thanks Stephen) then a final filter of steel wool and a spa filter in a 5 gallon bucket. Air filter is another spa filter… I’ve flared the unit but need a little plumbing work to run… Soon pic 4 is the nozzle form.
Best regards, David Baillie cool little tractor… i’m looking for something similar for myself… someday soon I hope.

Stephen’s cyclones work pretty good. He sent us up one when we built our second Victoria based hearth unit for testing.

Hey Arvid,
I’ve been watching your John Deere project. The tea20 is similar in footprint but is supposed to put out 28 HP. Someday we should meet up. Where are you anyways?

way up north… lol… 160 km north of NorthBay on… actually a little past that even… but if you stayed on Hwy 11 you’d run into our shop if you didn’t make the corner. We’re right at the Belle Vallee turn off.

This little tractor is from Hamilton area… it’ll probably go back home sometime next week.

Thanks Wayne,
I will build a WK unit someday but for now better to get rolling on somerhing!

Good Deal DavidB
Another tractor gonna be up and running.
Food making is #3 right after breathing and water making.
Regards
S.U.

Mounted up the plumbing on a board. Tomorrow on the tractor… Now, sleep Thanks for putting the pictures up David. What all do you use the tractor for (mowing, plowing,)?

Hi Marvin, mostly pulling logs and a bit of plowing. With the new unit I have a friend who has offered up a test plot for plowing. That is the real goal. Feed the tractor wood you grew, leave the forest intact instead of cleared for horse oats…

You’re right David… a pair of horses will need 4-5 acres of pasture, plus several more in oats and hay. Maybe 8 acres total… land which could easily produce 7-8 tons per acre annually - 64,000 lbs of wood will feed your tractor for a long time!!

First flare with the permanent plumbing setup. From light up 2min45 sec to engine start. Runtime on softwood charcoal 32 minutes including a twilight run down the road. Pic of flare video next daytime start… well too dark to see but she sounds great!
video: 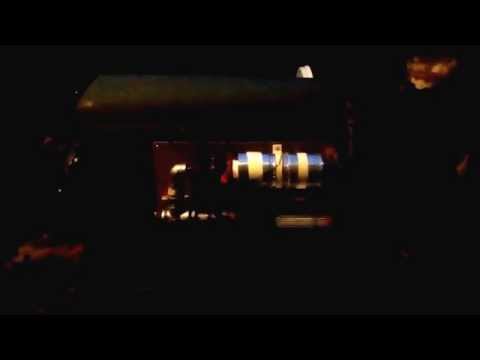 thanks Terry coming from you that means a lot!

Like a good horse, ready and waiting to go to work!

Very nice!
The great thing about this site is there are so many do’ers. It keeps us that are in the middle of our projects more encouragement to plug along.
Thanks for the video