The best part is the fast forward. I’ll never get back all the hours I had to watch other people weld, cut and grind just to find out where they were going.

I figured most you guys are tired of watching me grind and weld so I started leaving most of that out or speeding it up haha the thing that sucks is I’m doing all my recording on my work iphone and using a piss poor editing app called imovie. I can only speed up a segment to twice normal speed, I tried to use one short clip double the speed export it, then re import it up and speed it up again but every time i do that it corrupts the audio. So I started using time lapse for the monotonous parts, but its boring without sound. I would like to get a go pro and a cheap laptop, think I could do way better editing with that but it would take a lot longer to make the videos with editing cause then I would be moving from the camera, to the sd card, then to the computer and its a big hassle. And if I have learned anything about editing its the more times you move the file around it ends up corrupting the audio a lot, then I lose that clip and its pretty hard to go back and reshoot something you welded together haha

Excellent vidoe Marcus! Its been killing me all week to be wrenching on wifes expedition and not working on mine. But that engine is timed and almost buttoned up. Just need to put rockers back in and then valve covers. Should be able to be back on gasifier next week.

It would be great if i could get by on less sleep. Another hour a day would almost double my time i get to work on it… lol

but i can only do that for a few days before it would catch up with me.

time spent building is hard to come by, half my videos I’m shooting on my lunch break and then an hour or so after work is about all I get. But this weekend I might have a little time to come down to the shop. Cooler tubes…ammo can ash dump…cooling rails… so much to do. Still need to find the right size rear condensate tank and something to use for a hay filter. And the worst part I’m dreading

Just haul the truck down to Wayne’s place he knows a beautiful great painter.
Bob

Marcus I think a Quarter Keg would be a good condensate tank. About 7 gallons give or take and stainless so you’ll never have to worry about it.

Great job with the video Marcus

I’m still editing the video, but did you have a difficult time getting the 2 piece hopper to seat together nicely? My barrels were pretty beat up that I used and oh boy where they aggravating to get that clamp ring onto!

Yes Marcus , they can be difficult .

You can use a hand grinder to touch up the two pieces by polishing the outside of one drum and the inside of the other .

You can use a couple of small hammers ( one for an anvil ) to help shape the fit .

You can measure down on the inside drum the distance you think the outside drum will come to rest and make a little spot with your welder . It can be very hard to keep the two drums plumb while putting them together .

I think if I were ever get a chance to visit Wayne and Lisa, I would be more interested in the food Lisa cooks, I have seen the pictures and its enough to make my stomach rumble right after eating. Good down home southern cooking is the best! I’m sure I could kill many an hour on the front porch with Wayne jawwin as well

You got me hungry just talking .

I think about daylight in the morning it will be fried green tomatoes , chicken eggs , grits , cat head biscuits and I sure would like some sorghum syrup on the cat heads but the doc says for me to leave the syrup alone ( too sweet )

All I can say is yummmmme for the tummy. You just have to go south for that kind of food.
Bob

I watched your video again. You make it look so easy. Excellent video very easy to under stand what you are doing. I am going to do the same on my hopper for the gutters using a second barrel for the WK Gasifier build on the 1995 Jeep
Bob

I seem to be the only one who doesn’t understand, does the hopper look like this?
Don’t you get a lot of rubbish in the gutter at the bottom then?
I also don’t understand that you can weld such thin material, in one sweep, I could som most weld 1/4" before I burn through. 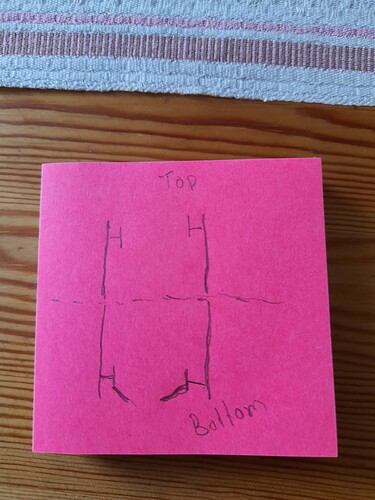 Yes but each gutter will have a ring that covers it to keep out the trash. Some small bits still slip in but not much. It is a very delicate weld, I focus the heat low and roll the weld up to the piece I’m attaching, just the very top of the molten pool. Has to be ground to a extremely tight fit up, a slight air gap will burn through very quickly. Once the base pass is down I come back through and put a cover weld across it which can take the heat at a slower feed rate and cover any minor imperfections in the base weld. Don’t get me wrong I still popped through a couple times and had to come back and stitch it together. Pop through one time and wasn’t sure why, then discovered my youngest son with a welding helmet on leaning across the controls knobs on the welder

Great explanations Marcus.
Reminds me of this one:
The pursuit of ‘Perfect is the enemy of Good’- enough at ever getting real things workable done.
S.U. & Voltaire