While out driving around today I pulled on to a scale and weighed my truck. With an empty gas tank and a 200# nut behind the steering wheel, my truck weighed 4920#. With my 4.3 V6, that works out to be about 19 #/cu. in. I’m wondering how my gasifier would work in a Chev S10 with a V6. What kind of weight to cu. inch are your Dakotas?.TomC

Tom, I think horsepower (on gasoline) divided into weight rather than cubic inches or liters is a more accurate way to calculate performance. If your 4,3 is about 190 HP that puts the power to weight ratio pretty close to my Tracker.

Yup, that is what my calculator says too.

Don I know it is common practice to talk interns of weight to hp. But, when I was in college we had two dynamometers. Put a V6 on one and a Chrysler fh six on the other. With the generator and power steering and water pump taken off we tested it to see how much hp it would produce. Then with the engine back together and the ignition turned OFF, we used the Chrysler to drive the V6. This we said was the internal friction hp. We added the “produced hp” to the “internal friction hp” and just about came up with the “advertised hp”.
Another point is I have a tractor with about a 2 L engine that is rated at 29 hp.( that is actual measurable hp of the pto ) You take a 2 L Ford Tarrus engine rated at about 100 hp and my tractor will out perform the Ford on a dynamometer
Most modern day normally aspirated engines will produce “about” the same amount of power per cu. inch or liter This is why I like to talk in terms of pounds to cubic inches.TomC

You also have to take torque into account. A small engine like Don’s Tracker will make all it’s power at a high RPM, and has very little torque down low. A big V8 with the same power rating will make most of its power down low, and have gobs of torque. This is the “grunt” that you can feel from your tractor.

Woodgas doesn’t like to rev all that much. Lower torque curves are better for accelerating on woodgas. That’s why the Dakotas do well… lots of torque down low, and not too heavy.

As far as power per cubic inch, that has gone up significantly over time. Modern engines are more and more efficient and have higher compression ratios. It’s not a fair comparison to take a 1977 Dodge 5.2L engine making 145 hp and 245 ft/lbs and put it against a 2004 5.3L LS motor making 295 hp and 335 ft/lbs.

I don’t want to hyjack Mr. Tom thread but I wanted to through a few pics up.

Two trucks with the same motor and I think the same HP.

One truck goes fast and the other one goes .

On the open road wind drag is a big factor . 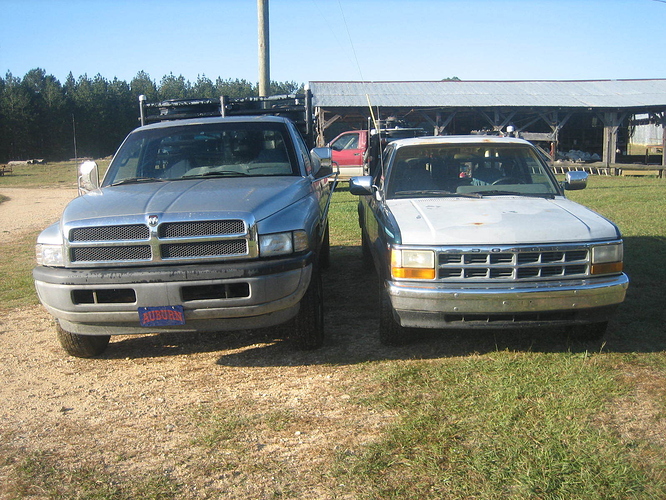 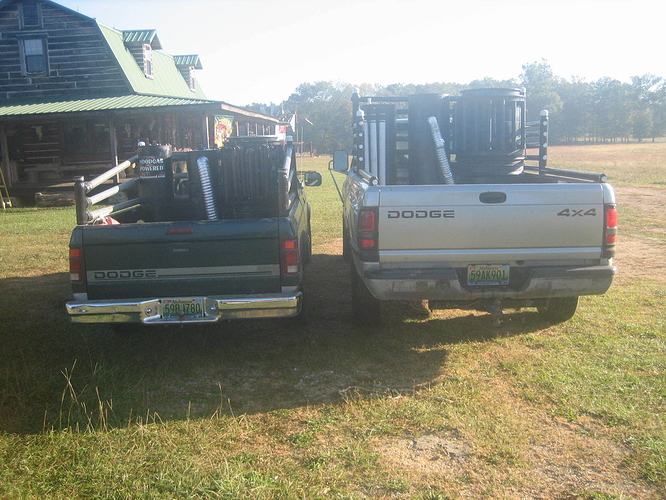 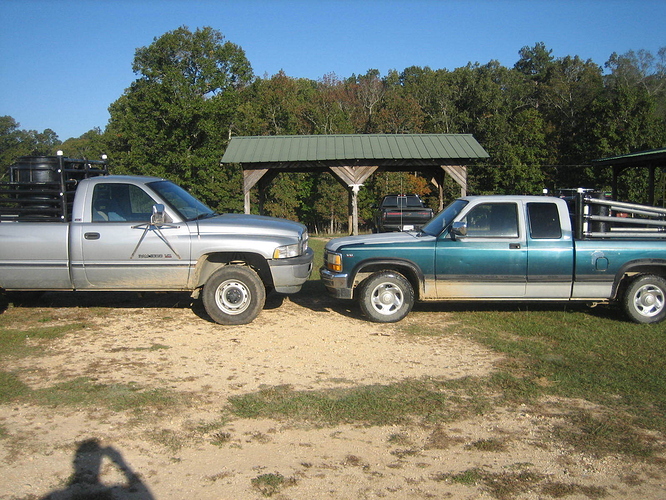 On a simular note too Tom, Chris, and Wayne, Don manns, what would you say would be the mpg if hybriding in wood gas on a port fuel injected s10 2.4 motor,and still not loose too much power,when in hurry too move faster than don manns tracker,1.6 motor ? THANKS

If I remember correctly, Carl Zinn said he hybrid drove with his dakota pulling a trailer and got 40 miles per gallon

Thanks carl, I thought it was 80 mpg ,Is that your lowest seting for hybrid driving ? so maybe 50 mpg or so pulling loaded trailer driveing at a fast freeway speed,THANKS

Hi don, on the subject of weight vs HP,what would you say yours weighs with the set up you have, and how often do you need too hybrid too keep out of the way and maintain 55 MPH, My s10 with the 4 cyl.weighs about 2800 without any weight added.And are you satisfied with the take off speed VS miles per pound of wood,or would you rather build with bigger motor.THANKS 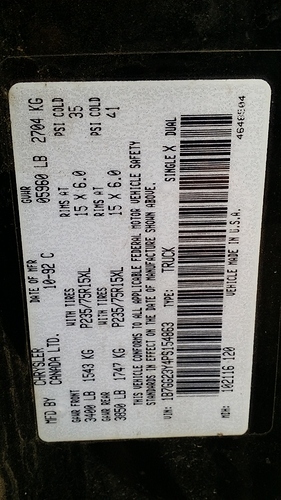 Maybe we should split off a “Power to weight ratio” thread…

Could yous please help me translate my door sticker? Google searching said it should have a “curb weight” of about 3,700 lbs. Door tag says:

@Chris picture stuck at 100% with text. Had to Cut text, upload picture to a blank post, and Paste text back in to work.

Max weight your vehicle can be register for

Yes. That’s not the “curb weight”. You’ll have to run to the dump or somewhere that has scales.

Not sure on the photo thing, it works fine here up to about 4-5 MB. If you reduce the megapixels on your phone camera, that will help.

power to weight ratio is definataly important I have tried to explain this to some and you can see there eyes glaze over like explaining octane . anyway I have been pleased with the my build the Dakotas appear to do better so this winter instead of trying for more power I will first lighten the load . pull of any thing not needed or used or try to find lighter materials.

Kevin, the Tracker weighs 2740 lbs. without my fat butt riding in it. I try to not jump out on to a road in front of traffic and give myself time to get up to speed and if I drive like that I never use hybrid. Sometime I want to try Wayne’s method of turning the gasoline on while running woodgas and gradually close the air so the computer thinks it is running rich and shuts the gasoline way down. Don’t know it that will work on the Tracker though. I don’t do much freeway driving anyway.

Thanks too all are questians,and Don Manns,thanks for building the tracker,and sharing the results,I think the port injected toyota is my best bet for next build,due too i rarely drive on the freeway over 50 mph anyway.And your distingwished build, That is open too see in the premium section at Drive on wood.If needed for extra power hybriding can be tweeked and tuned, Thanks

I love trying to explain octane to someone. It is like there whole world is crushed before there eyes.