Good after noon Tom C , I got a cheap harber freight mig welder that dont want too weld worth bird ?
when i was welding with gasless wire it seem too work good,know i will search for that fix.I fixed my stick welder, the cooling fan was too small and quit,so i open’ed the back panel, I put a big 10" window ac fan with a full shuroud out the back panel, some fans are scwirl cage type and this one is reg fan blade, in place of the toy 4" fan from factory, that was about like blowing on the transformer with a coke straw, with no exit with the air it was pushing. FIXED,I can weld allmost non stop and check the temp on the hottest transformer,and it only got up too 107 f ,That was after welding several beads about 29" long.Good luck with the welder.I think my mig welder is next for the big fan,after i find the faulty or smoked fuze or diode likely. PS I see i have a cord and fuze panel fuze in my barn going allso,Thanks.

Kevin, are you welding with mig gas now? Did you reverse polarity? I think it is positive ground without gas and negative ground with gas if I remember right.

HELLO DON MANNS, Trying too weld with gas,I bought 4 -10#rolls of 0.23 solid wire, I thought i did change the polarity correctly,I got too recheck,then useing my meter check for ac bleeding past the diodes, there will be some ,but not sure what is a tollerable emount yet.from the diodes too see if diodes are melting down,i heard you can loose power from faulty diode bridge,so i check that too, It has done nothing but pop since i changed polarity and wire,THANKS

Hi Kevin,
I just ran into this site last night and I’m sure it addresses your problem. He starts at step one setup and goes from there to using, etc. A very knowledgeable guy
Pepe
Weldfever 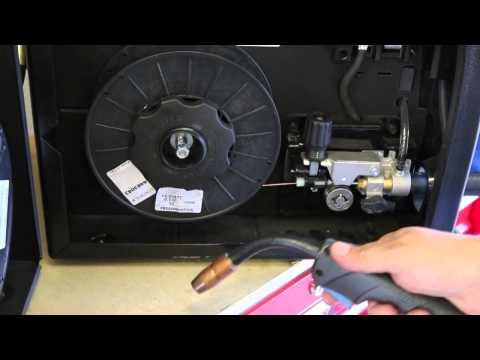 Thanks pete that looks like a good wire feed testing, i may have too get a smaller tip,my tip is for 030 or 035 wire and my wire is 023,and yes that did help tunning the tention on the were feed and roll of wire Thanks again pete ,and allso Yom C.The other half my problem is my cheap weldere and like mr. al frick was saying ,i beleive i need some no ox greas too keep the main 220 wires from corodeing,as i pulled the wires last night moveing the brakers over one notch,i seen the corrosion on the wires that get screwed too the brakers,a bad layer of the whitish ox corrosion,that can cause power fade while welding.THANKS AND BACK TOO MY chicargo electric pop corn poper mig till i get a real welder.If i dial it in it barely welds without the poping.At least it welds for some welds,i woulent want too use it on the heat exchanger outer ,as it might extract leaks over time with the poping areas.

Thanks Pepe; I watched many hours of YOu tube trying to figure out my problem. He did not hit upon my problem of having too long of and extension cord to the welder. But he sure hit on all the other subjects and many that I have not seen such as “tensions”. I knew they were important by what to set them at was a mystery. I don’t care how long you have welded, watching these four productions will teach you a little something. And if you have a problem go to the net and find the welder manufacture’s weld sight. It takes a little doing but some where there is a “technical support” telephone number. The tech I talked to did not find my problem right away, but we kept talking and discussing and bang, he hit my problem. Thanks again PepeTomC

HI TOM C, i am glad you had mentioned about the cord suspect,after noticeing the cooling fan i added too the mig welder not moveing very fast i knew i had a cord problem, then after turning on the stick welder too test the fan on the mig welder would speed up too normal. so i headed out too flip the braker at the pole , and that was no gain, so after fliping brakers and testing the voltage at the inside barn electric braker box,i dicovered 75 volts on one side of the braker box and 107 volts on the other side of the 240 line, any way i replaced the braker box in the barn and the voltage is 248 acrost the 240 line, the old braker box that was in the garroge was used when installed 8 years ago as the code alowed used for garroges,and it passed, this box has newer type brakers, Back in buis, no sizzeled brakers ,full voltage,mig is working better,THANKS

Thank you Kevin; Makes me think all of us who are working out of “home shops” should check to see what our circuits are doing. Although my welder is working better, it could always be improved. I am going to the shop and see if I can figure out how to test my voltageTomC

Those kind of bad contack brakers can be intermitten,so just keep a meter handy,too test inbetween cords,braker boxes.carfull not too hit the case grounds they are everyware at the braker box, my brakers had sand in them right after i installed them we had a sand storm after another,and my tin walls werent sealed too the roof yet.

Hi Tom, In my 30 plus yrs of electrical work I have found in most out building elec. problems, in most cases it is a neutral problem, loose, or corroded connections. Always use no ox on all connections, it is an electrical grease for dissimilar metals. Al

Ok I check the socket where I am now plugging in my welder. 121 V on both so good to go. Al, you have got me concerned. When I built my house I drove 4 six foot long brass (?) rods in the ground and tied them together with a brass cable and hooked that to my electrical box. ( I buried the rods and cable under about 10 inches of yard)
. I hired a guy to run the electricity to my shop from a separate meter. I took the three wires and wired my shop. But come to think of it, I don’t remember seeing a ground rod out by the shop. There is one (?) at the pole with the meter. I have to look into that. Would that one be good enough for my entire system?TomC

HI TOM i dont remember if i put one by the garoge either.i think the gound rod goes to case ground,or the center wire on 110 volt plugs,and they get broke off half the time. Now that FRICK mentioned it ,i have had my ground wire loosen up more than once,probbly from corrodeing.I probbly need some of the no ox grease my self. IF i have a lot of wires too fidel with i will pull the meter too unhook from the road power.untill repares are done at night out by the pole.

Tom, if for nothing else, for safety you should have a ground rod at your shop, and all grounds, and neutrals tied
together in the breaker box. Al

Per the electric company printout, I have two 6’ ground rods driven in 6’ apart with a copper loop connecting them and buried about a foot deep. I have a 4 wire system running to my shop with all grounds and neutrals tied together. All connections are gooped with a dielectric gel. I have no ground rod for the shop, but my wife picked up a 6’ brass ground rod at the auction for 2 bucks, can’t believe it. I think I will add it to the system just in case.

You can never have too much grounding. Grounds are as important as power, and is the most over looked, especially on vehicles. Al

A little off topic but I have lightning rods on my house connected to a ten foot metal rod driven in the ground .

Could someone please clarify how grounding rods should be aligned?

I keep hearing rods being “driven into the ground”, which to me implies a more-or-less vertical/straight down.

Then, I also hear “buried 1 foot underground” which could mean that the rods are horizontal/flat, after the installer dug a long trench, 1 foot deep.

I guess another option would be someone digging a 1 foot deep hole, driving the 6 foot rod straight down, and back-filling the hole. This would have the rod completely surrounded by dirt, and the bottom tip 7 feet below the surface.

@Chris could you please split these into a separate “Grounding” thread? Thanks.

Hey Wayne, around here the only lightning rods found on buildings are on those built before the age of radios. One a quarter mile from me. They call it a centennial farm.

Brian The option where you dig a one foot deep trench, then drive the rods in vertically and tie the rods together at the top with copper cable. The cable then goes into the main box for a grounding of the box. The power company required 4 rods buried two feet apart for my house.TomC

GOT MY HEAT EXCHANGER DONE THIS MORNING, WORKING IN THE COOL NIGHT FELT LOTS BETTER.The cheap welder has serprized me thus far, other than i think the diodes are half shot,as they read 33volts DC and 16 volts AC, that may be why the poping ,though it is burning steel just good enough for now.I may post it in premium section some other time.THANKS,SWEM