Hi everyone, is there some one here who is knows how to size an Imbert gasifier. I am rebuilding my MEN to work with the supercharger I added a while back and am finally resizing it, and was wondering if some one could help check my figures.
400CID at 2000 rpms What would these dimensions be.
1, Nozzle ring diameter
2, nozzle area
3,restriction diameter
4,nozzle hearth separation
5,restriction grate separation
I would like to double check with some one else on these,and any help would be appreciated
My motor is a 300CID and I am running up to 4lbs of boost, I am guessing that the woodgas volume would be 20 - 25% more.
Thanks Ron L

But, i think no one will do the guessworking of all the using specs you left open!

Air preheating or not?

Wood preheating besides hearth heat leaking up into the silo?

Silo condensing or not?

Maybe someone goes on without paying any attention to your conditions?

The first gasification test mule I bought was a '95 Ford F-150 with the 300 and 5-speed. Great truck! After Wayne’s book was released I bought a '92 Dakota with the 318. My plan is to duplicate Wayne’s system to a T, learn from that and then build the Ford with the 300. My ultimate plan is to rebuild the engine with high compression so it will only run on woodgas or E85 (or maybe some E100!).

Hi Max, I knew you would know

. The engine is still the 300CID inline 6, and the operating speed is around 2000 RPMs.
some preheating of the primary air but the fuel is only heated by the heat moving up into the hopper,The fuel hopper has a trough for condensate but the fuel is very dry.around 8-10% and the hearth is insulated with 1.5" of refractory lining .
I want to pull a trailer so there will be a modest load 80% of the time at least. It is the same engine I have used for years and it will go 60 mph constant without a load but I have added the blower and ran it some without resizing the gasifier to see how it runs, and am finally getting ready to resize it to see if it will make much difference. I think the blower is called a roots type run off a pully from the crank pully
This is a version of the old Mother Earth News gasifier I have successfully used for years but had to have some engine work done and it has taken a couple of years to get it up and running again.
It is nice to hear from you , Thanks Ron

Hi Todd you are right this engine is a real work horse, and I am persuaded that on woodgas is a better choice than the 302 V 8… Did you get to run your 95 ford on wood, if so what kind of speed or power did you get from it and what kind of gasifier did you use?
I know that the moisture content in the fuel can make a huge difference in power up to 20%.and timing advance can add almost the same increase in power for woodgas!
Ron L

Nothing yet. Life got in the way. I have a new guy at work who is a good fabricator. I hope to get him involved when we have some slack time around the shop.

My plan is, as you indicated, to advance the timing plus the increased compression ratio.

Have you shared pics of your blower setup? That will be really interesting. I remember talking with the Auburn University folks about their belt-driven blower on their BioMax 25. Had they considered using it to force-feed the engine? As it turns out, they had!

The more you deliver of the current data, the easier it will be to shape something new!

Hi , Are you talking about the application for the gasifier? If the old concrete inner measures worked well and I am only increasing the gas volume demand, will increasing the inner measures be sufficient?
with my old setup to go 60mph the engine is running at 2400rpms. I have added the blower and with the pully that it has will produce 4lbs of pressure. This is where I am not sure would the 4lbs of pressure be equal to a 25% increase in displacement volume…Even thougk the engine displacement is only 300cid will sizing the gasifier for 400cid be sufficient?"
My goal is to drop the engine rpms to 2000, by changing the transmission adding an overdrive gear, or change the rear differential gear ratio.
Even with the old gasifier there is an increase in power with the blower but I think it is at its limit producing good woodgas.
most of my driving is highway speeds.
The sizing specifications I have used in the past have been from the Mother Earth and imbert charts and the old woodgas group has an FAO sizing calculator but they all vary a little.
Thanks again , Ron L.

Hi Ron, are you planning on putting a muffler type preheater on you new gasifier build? If so then maybe build it now and try it out on the old gasifier unit to see if you have any sufficient increase in power or efficiency on your gasifier unit.
You mentioned hauling with the truck, this might give you some extra help in doing that. Also at highway speeds. Preheating the air will also give you more turn down ratio which is always a advantage when idling.
Bob

Hi, Ron!
26.10.2018
It will not be only a type of scaling!
The proportions may have to change too.
If I get the excisting measures, I can draw a “see trough”
drawing and analyse how it performs today.

On that, and additional observations a new version will dawn…

With the same compressor you need to increase
the output pressure to get same power at this lower RPM.

Hi Robert, here is a photo of the pre-heating tubes that are in the gas cowling around the hearth. This is the MEN plans. 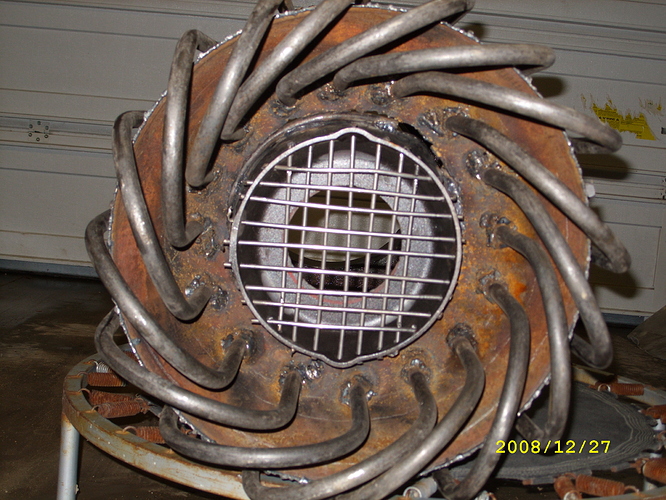 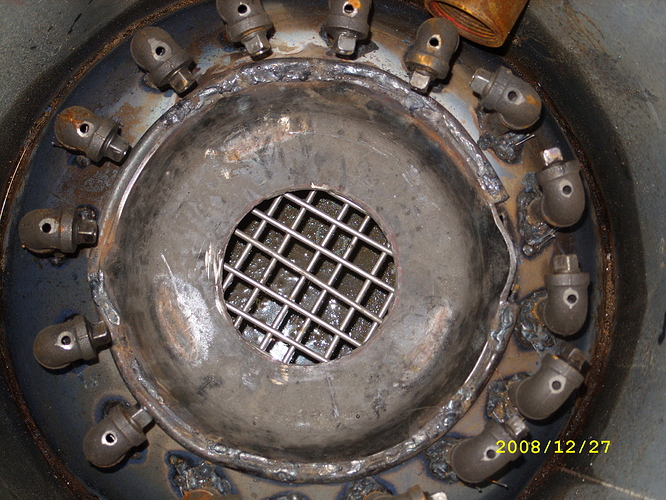 Thank you Max, I think I over simplify this. Right now at 60 mph the engine runs 2400 rpm. My goal is to get the rpm down to 2000. but for now leave the rpm where they are. Do you want the current hearth specs? Let me know. I will have to go measure them.
Ron L.

Yes! And at least all you have initially listed!

The more, the better!

Wow, I thought my 12 nozzle set up was a lot of nozzles, your 16 has me beat. Once your unit is up to temperature your in coming air is hot and the out going hot wood gases are cooled by heating the in coming cold air in the tubes. I like that design.
Do you have to do yearly maintenance cleaning of the tubes to remove the soot like we have to do to the heat exchanger in the drop box of the WK gasifier but we have to clean it more often?
I remember reading that there was some sort of annual cleaning done in the hopper mantle area on the Imbert design.
Thanks for the pictures Ron.
Bob

Yes and if you notice each nozzle has two jets a vertical and a horizontal one. This pic was taken when it was new , the frying pans only hold up for about 5000mi besides my wife wont give me any more of them:grin:
now the restriction is stainless steel but the frying pan just holds it.

That’s 32 nozzle holes , double Wow. Is this your own design the double hole nozzle?
Bob

Is that including both uppblowing and horizontal blowing areas?
Are the vertically and horizontally blowing holes identical in diameter? Or different?
This has a remarkable effect on the glowzone volume!

I like measures to be precise to get a correct impression of the currents, otherwise I am floating into Fantasy Land, and that is hardly your intension?

Additionally, is there a vivid charing just abowe the upblowing nozzles? Or just a weak fire?

Hi Max, this is really interesting!! Yes the 1.5" is the total square inches of nozzle area.
The vertical nozzles are 1/2 the area of the horizontal, so the16 vretical are13/64, the 16 horizontal are 9/32 this is the diameter in fractions of an inch.
The MEN people used to have all horizontal jets but they had a problem with the fuel hanging up on the top of the nozzles.
For me this arrangement worked really well.
Fantasy Land usually sounds better, but is only an accident if it works.

Hi Ron, there is usually a solution to any problem. This is a good example of a Accidental Fantasy Land Reengineering Experiment In Action. Because of a observation made by others and you were willing to just try something different, and it Worked! Good job! You are a Gasifier Scientists, you just proved, that there is still more to be discovered in the world of gasification. It has not ALL been done, and there is no more to be accomplished. There is a lot of more discoveries for those who are will to experiment.
Bob