Oh, the video I posted first, see the first posting.

Thanks! Yes, an ATV would be a nice platform. Balance even on this small bike is better than than you would think, weight is not that bad, but four wheels and extra rack space would be better.

That is BEAUTIFUL!
Now I want one too. Enjoyed meeting you at the Fly-in. And why the heck didn’t we offer you a ride? Sorry about that. Get that Ford Gasser going and bring it over here for a race down the runway.

Thanks, and you are on! A race next year will give me a target. Hopefully it won’t take that long!

Nice job on the bike Martin. Keep the truck as light as possible.

"Lotta time at Home Depot with stuff laid out on the floor and the plumbing guy asking me, “Well, what are you trying to do, what does this go on?” " Oh yeah… I know how that goes…

My roommate actually works at the local Home Depot, though he’s in Lumber. The main Plumbing guy was a kid during WW2 and he had heard his dad talking about the gasifiers “over there” but hadn’t heard of anything since.

Nice looking ride Martin! I’m glad you are able to put the wood (char) to the pavement!

Yes, the B&S bit the dust. The bottom end started seizing up. I replaced the connecting rod, but the instructions said to put the oiling hole direction opposite of the way it came apart.
It lasted about 5-10min. after the “rebuild”.
The whole unit, gasifier/ tractor is just taking up space in the barn along with many other interests/projects.

I have fond memories of talking to you at Argos last year,
Terry

Thanks, Marvin, Brian, Terry! Terry - sorry about the tribulations with the mower. Do you think tar or woodgas had an effect on it? Just too many RPM’s? Just worn out? Maybe you can re-power it or put the GEK on something like it. The crowd sure had fun watching you spin it around, do high speed grass cutting at Argos! That thing ran like a scalded dog. Now that my son has made a YouTube channel for me, can I put a video of it there?

The tip your father gave me for drilling stainless worked well. Tell him thank you for me, again. I hope to make it to Argos next year - is the event going to held there again, has that been decided? The Marshall, AR airport, hosts Richard and Carl and that area in general were all fantastic, btw, just needed more woodgassers.

Martin, This was my learning project. And yes, I did junk her up a few times. I had it running clean for quite a while though. With last tear down one can see the clean combustion chamber. I assume it was old age along with the stress of the original tar attack that was the straw that broke the camel’s back.

Feel free to post any video of me. I only know of 1 of the many cameras I saw filming me. Don Mannes, it was a private link. A few years before Otter had a nice long clip of me running around his place in Akron.

My dad will be happy his advice helped you.
He is currently finishing a “racing” buggy. Two motors in a smaller frame. His trial run set him back in the seat!

I’m getting caught up at this site. I haven’t logged in in a while, and my $50 book purchace/premium insider subscription is about to run out.
I’m always getting into new projects/learning adventures. I’ve been drifting away from WG. I’m sure I will always have an interest in it though.
Terry

I’ve been diverted on a few other projects from time to time, myself. What makes this a great project/hobby, though, is this “tribe” of folks we have! Better re-up, do the lifetime membership! Be keep in touch even if you don’t! I will work on getting the riding mower video up …
MP

Fuel consumption estimates:
OK, I refilled the gasifier, took about 1.31# (21 oz). Ray’s charcoal weighs about 1.25#/gal, so call it about a gallon. The estimated runtime was 30 minutes (we didn’t time it, but believe this is pretty accurate.) So, 2.6 #/hr, or 2 gallons per hour. The volume of the gasifer is about 0.083 ft3/in. There’s about 6" of useable fuel storage space, leaving 2" above the nozzle. Now, ash and vessel temperature may get in the way, but if we could use all that space/charcoal that would give us 1.8 hours of runtime, implying a range of say 36 miles at 20 mph. Just a ballpark guess at this time, as we didn’t run at a constant speed, didn’t time our run exactly, etc.

Sorry Terry, I didn’t realize it was a private link. Here it is again and I think I changed it to public - if it worked. 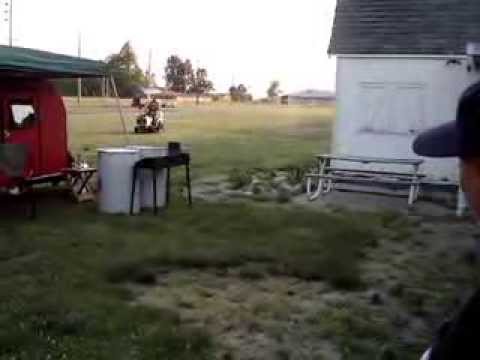 Real good to hear from you.

I really enjoyed seeing the lawn mower at Argos!! It was the star of the show.

That video of Terry’s wild mower riding reminded me that there were a couple of emotions going through the crowd. Everyone was tickled that it was running so well, but at the same time it made you pucker up a little bit when Terry mowed close to the crowd and pulled a 4G turn! I couldn’t help but remember about when Dan Pasteurini (Houston Oilers QB from the 70’s) drove his speedboat into the crowd, could imagine the Indiana headlines: “Wild, wood-powered mower mows down crowd”. Note in the video where the one guy walks back to stand behind his “friend”. Ha Ha!

I forwarded a link to this forum to a non-member and asked him to look at the video in post #1. His response was, “Interesting. I am surprised it runs on charcoal instead of wood. It was my understanding that wood gas was what came off of wood when it was destructively distilled into charcoal. Thus charcoal shouldn’t have any gas left in it.
Was this some kind of “half-baked” charcoal?”
I wrote him a response this morning, and thought I would post it here. (In case I got something wrong.) Here is what I wrote:
The goal is to have no “half-baked” pieces of wood in the charcoal.
If that is achieved, the charcoal gasifier will require a minimum of
gas filtering, which results in a very light and portable power unit.
Martin’s Honda has only a small canister filled with filter media
(porous foam). The weakest link in a charcoal unit is the nozzle
because of the intense heat, similar to that in a charcoal forge. The
last slide in the video shows the glow of the charcoal through the
nozzle. As air enters the nozzle, it initially burns the charcoal to
produce Carbon Dioxide and heat. Almost simultaneously, the Carbon
Dioxide and any water vapor react to produce the fuel gases CO and
Hydrogen (H2). The first reaction is called the Boudouard Reaction,
and the second reaction is called a Water Shift Reaction. These
reactions need to have a temperature above 900 C to occur rapidly.
Below 900 C, the reaction slows, and the CO and 3H2 can react to form
methane and water. You will notice that the exhaust gas from the
Honda engine is put back into the nozzle in order to somewhat regulate
the reaction temperature to keep from destroying the nozzle but still
keep it above 900 C.
At one time, the thought was that my charcoal was not dry enough, and
was putting lots of water into the pipe leading to the motor, but now
I think the water is formed when the temperature dropped below the
magical 900 C. Martin has some expensive thermocouples, and I will
have to look again to see if he used one on the Honda unit. There has
been some talk about using an Arduino to read temperature and make
adjustments.
So, to answer your question, the motor is running on Carbon Monoxide
and a little bit of Hydrogen. If any of the non-carbon items that
might be present in the charcoal get through, and if they are not
trapped by the foam filter, they will gum up (seize) the valves in the
little Honda. Since he left the carburetor in place, the engine can
run on gasoline (just before shut-down) by turning the fuel valve. I
think that is a good idea, as the gasoline will clean any tar from the
valves, and prevent the “gum-up”. (Stuck valves are usually found a
day later, when the engine is cold.)
Making charcoal wastes a lot of heat, but if you do any heating with a
wood stove, you can sift the ashes and recover some good charcoal.
Optimum size is 1/8" to 3/4". A TLUD cook stove also makes good
charcoal every time you cook food or heat water.
Ray

Thanks for posting that link Don. I assumed you wanted it private.

Martin, I hadn’t noticed the “friend” before. Thanks

Mike, as I always tell people, That time in Akron was golden for me. It was the only place in the world that I could talk of the magic of WG without people looking at me like I was crazy.

The mower was running about 75% in this clip at Argos. Every firing has it’s own personality with WG. In top notch form I could lift the front wheels about 10’!

The Motofier lives, at the Mother Earth News Fair in Belton, TX, last weekend! (I sent many inquiring folks to this link, so I am opening it back up.)

Ray took this neat shot, with Carl Zinn’s truck in the background; 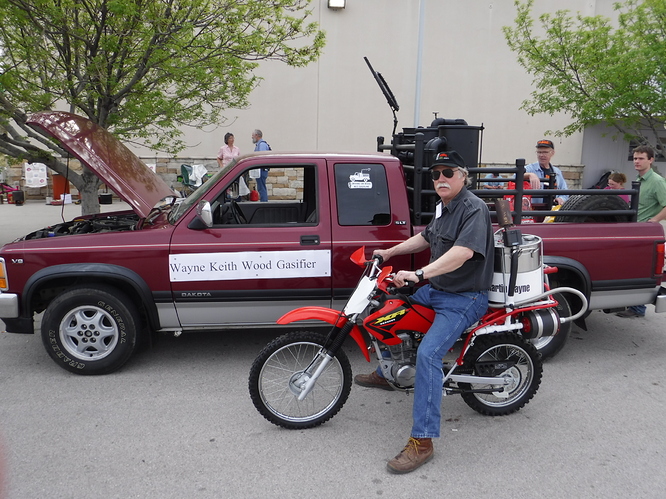 I figured folks would want to know the range, so I did some fuel consumption estimates, based on past runs.

This is a 36 quart, or 9 gallon pot. I think we can take the charcoal level down about 6 inches from the top, leaving about 4" of charcoal above the nozzle, for insulation purposes, to keep it from getting too hot. So, that is 3.6 gallons, or 4.5# of usable charcoal. It uses about 2.6 # per hour on Menke charcoal. At 25 mph that would mean about 10 miles per pound, or 12.5 miles per gallon. Call the range about 50 miles, max runtime about 2 hours. This seems to cross-check with the consumption from some charcoal-powered cars I am familiar with, in terms of mileage on charcoal versus mileage on gas.

I’d like to be able to advance the timing on the Motofier - any motorcycle mechanics listening?

Martin, how did you come up with your figures of charcoal weight per gallon? This website http://www.traditionaloven.com/building/charcoal-wood/convert-pound-charcoal-wood-lb-to-gal-of-charcoal-wood.html
says that wood charcoal is 2-1/2 pounds per gallon.