I am very impressed!

Had another refreshing visit to Steve’s about a week ago. Impressed with the many thoughtful improvements as everyone has been following. Planning another visit later on this summer. Looking forward to a few videos and more photos for everyone to enjoy along with us in this exciting adventure. It’s important in life to surround yourself with good people. Especially if they are just as addicted to the same things as you are haha. 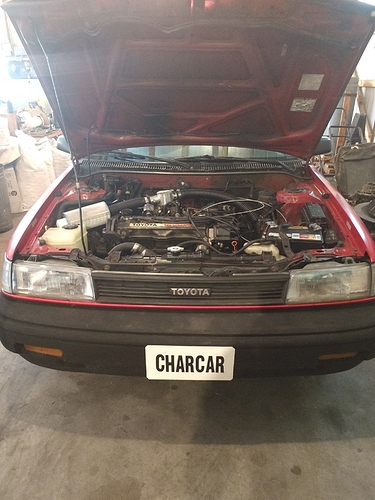 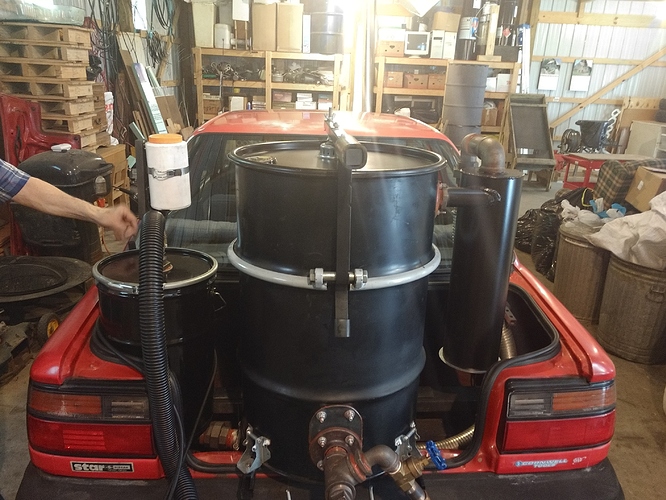 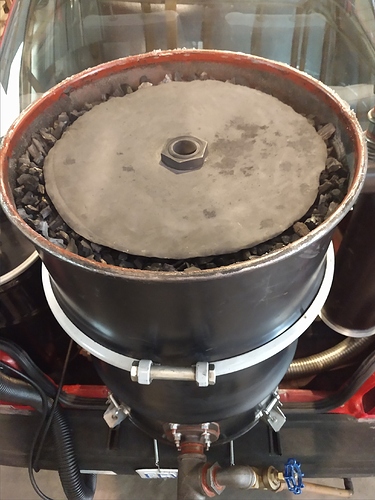 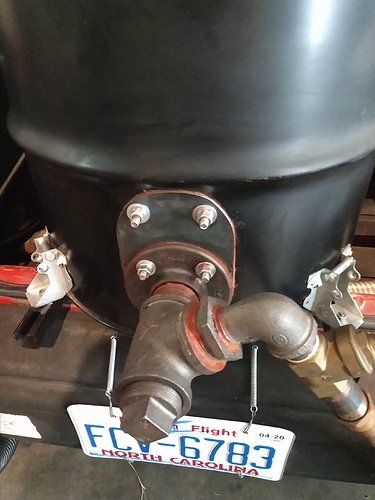 Thanks, Kyle for posting photos. Glad you enjoyed the visit. Looking forward to entertaining your family soon.

Here is a charcoal project update:

My first effort to power an engine with chargas was with my grist mill engine. It never worked very well, so I gave up on it after finding that the push mower engine ran so well. I thought of getting another engine for the mill, but decided that what I had was good enough and chose to continue running the mill on gasoline. It is an old engine and only two horse-power. I suspect that the low power has been a major part of the problem.

Anyway, I gave it another try today, using my medium size (16 gallon) gasifier. I tried an oil drip first. That was a disaster. So, I cleaned out the oil, replacing it with water and started again. The engine still does not start very easily, but did run well and had plenty of power to operate the mill. I think the difference is experience. Even though I connected the exhaust gas recirculation, I didn’t need it to maintain a good reaction temperature. It may be that I was cooling the reaction down too much in earlier attempts. For this run I used the carburetor adapter off the lawn mower and the exhaust adapter from my generator to complete the set up.

Mostly, I grind corn, producing corn meal and grits. I usually grind a year’s supply around Christmas time giving most of it away for Christmas presents. The grits seem to be a favorite. So, who knows, maybe this coming December I’ll power the mill with charcoal.

Here are some photos of today’s setup: 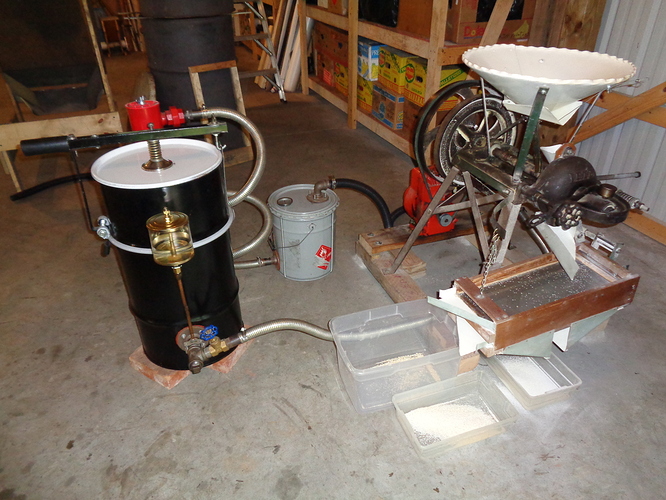 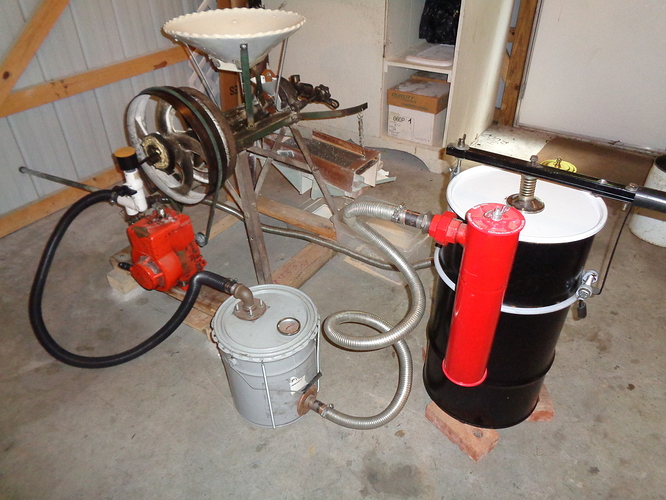 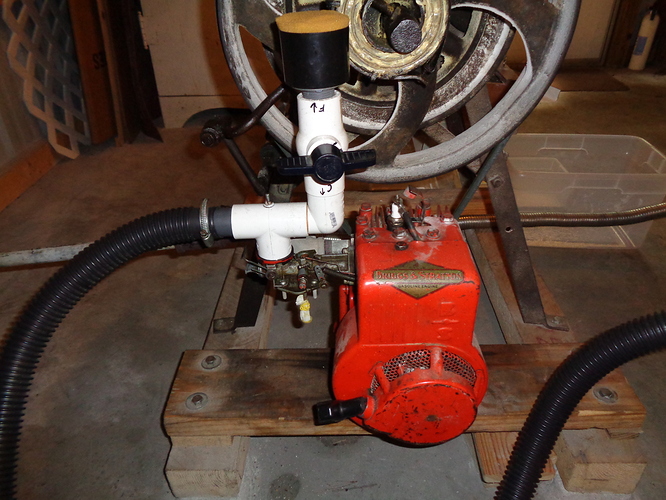 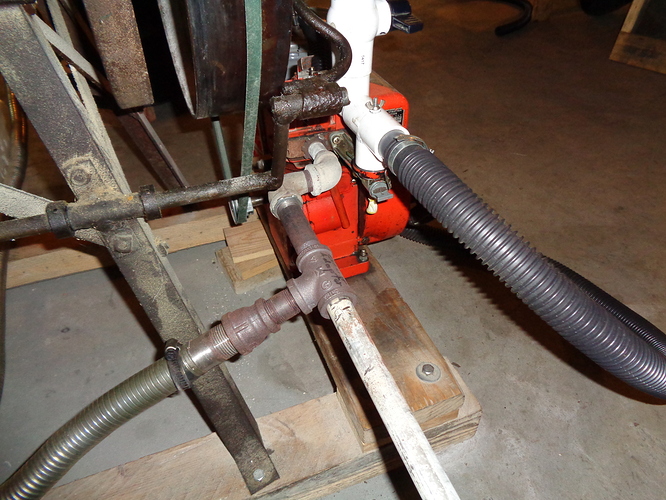 Today was my first time ever participating in a car show. I declare, they will let anyone enter a car show these days. Look at what was on each side of me. My car did generate a lot of interest. I started it several times and let the engine idle for a while and then drove home on charcoal. A good time was had by all. 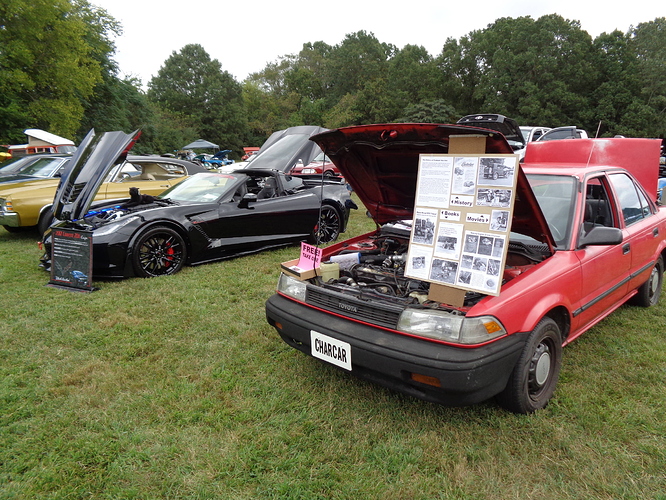 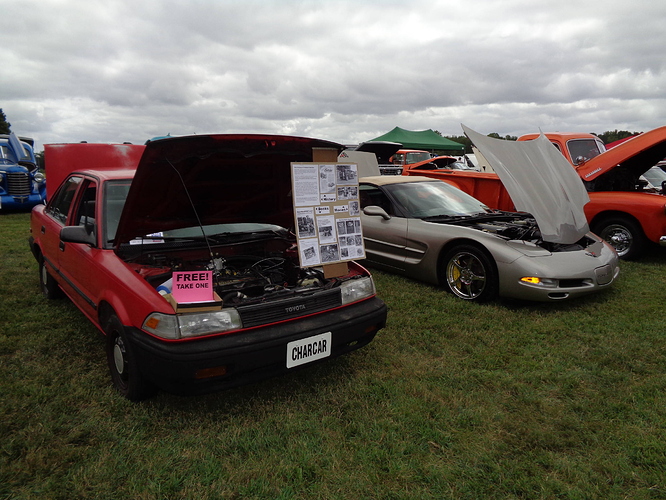 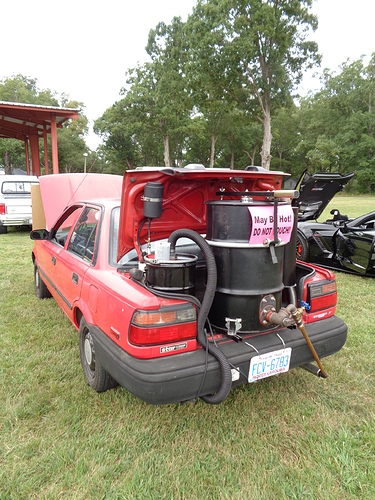 I’m thinking about adding a sign for next time which says “Non-fossil Biofuel Powered” for the green, clean, politically correct set. I don’t think any of those were at this car show today.

Nice one Steve ! its exhibits like yours that make car shows more interesting ,how many times have we all walked around shows thinking oh one day i may be able to afford a car like that ,its the down to earth everyday drives that stirs the imagination .
Dave

Keep up the good work.

Thanks for posting and keep up the good work

Dave, Arvid, and Wayne: Thanks. Although I have spent several times the money I paid for my $200 car to get it where it is today, it means more to me and I’d rather have it that any other vehicle at the show. I thoroughly enjoyed the day.

Today, I made a video on the maintenance of the Corolla gasifier—nothing special—just the usual stuff. Hope you enjoy it. I don’t drive the car very much, maybe a 5 to 10 mile trip every couple of weeks. At that rate it seems I only have to do a barrel cleanout every six months. I just chunk it down and fill it back up with charcoal between trips. I usually perform the maintenance procedure between each trip, also:

Very good video. I always lean something from one of these which hasn’t been mention in the discussion. First, why do you have a barrel clamp down one section from the top of the charcoal-a-phire? Second, do you have the air intake pipe directly in the stream of exhaust gas coming out of the tail pipe? It looks like the pipe valve controls both the air and the exhaust gas, but there is no individual exhaust gas control. Glad to hear you had a good reception at the car show. I took my truck to a show and was very disappointed. There was my truck, along with trophy winning “classics” and “hot rods”, but the only things that got the younger peoples attention were the new Corvettes and Dodge Vipers— the things you buy at the store for enough money.
Thank you again for the great video and your posting of your build. TomC

he maintenance of the Corolla gasifier—nothing special—just the usual stuff. Hope you enjoy it. I don’t drive the car very much, maybe a 5 to 10 mile trip every couple of weeks. At that rate it seems I only have to do a barrel cleanout every six months. I just chunk it

Nice video, seems like it’s quite easy to maintain.
Do you think the will be a problem if some coal dust gets to the engine?

Thanks for comments, JO, Tom, and Jim.

Tom, if you are referring to the clamp on the lid fastening to the bolt ring on the highest rib on the barrel, by doing it that way, I was able to fasten the clamp to the barrel without having to drill additional holes in the barrel. I figured fewer holes, fewer potential for leaks. I still ended up drilling more holes than should have been needed.

Regarding the air intake, the plug I removed to clean out the nozzle pipe is also removed when operating. That is where the air enters. The valve on the pipe going to the exhaust is what controls the amount of exhaust gas used to cool the reaction. If you take a look at my start-up video, you’ll notice that during operation I have the water drip nozzle screwed in place of that plug in the air intake port.

It was mostly older folks who showed an interest in my car at the car show, but some young ones did have a look, too.

Jim, between the cyclone, multistage media filter and 18 feet of plastic hose, only a very small amount of dust makes it to the engine. In my case, I don’t see how that happens, unless it is the velocity of the gas being pulled through the filter. Occasionally, I will wipe a clean finger around inside the fitting above my carburetor and will pick up a bit of black stuff. I understand that charcoal dust is abrasive and therefore can do harm if not removed.

Here is one idea for a parade sign for my car door—perhaps a bit overdone. Maybe I’ll tone it down a bit. From what I hear Koen saying, i could add "runs on air pollution or at least a by-product of air pollution. What do you scientists think? 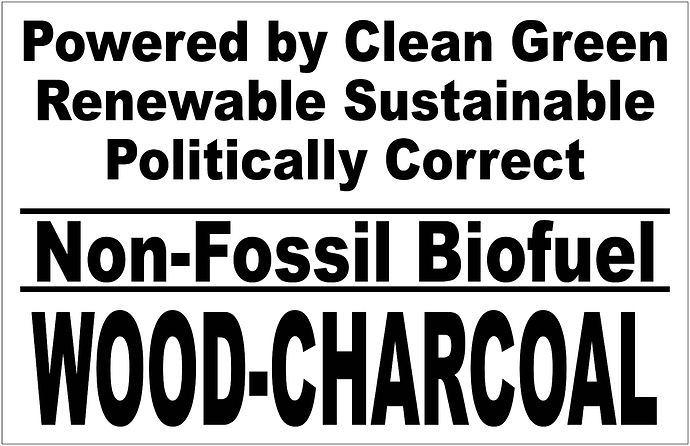 Steve, I love your poster, its a keeper!!

Hi Steve, I would add the word (SCRAP) WOOD CHARCOAL for the Washington State tree huggers. Also put Spotted Owl, and all the other endangered animals safe for the environment. Carbon neutral.
Bob

Rindert, Mike and Bob—Thanks for your input. I will keep your suggestions close by when looking for different ways to present wood/charcoal gasification to the unsuspecting public. Yes, Bob, when you try to include something for everybody, someone or group is always overlooked. My first sign was over the top. I knew that—just looking for reactions. At least for my first parade, I plan to use the more conservative version shown below. Keep sending more ideas. I’ll consider them for future editions. 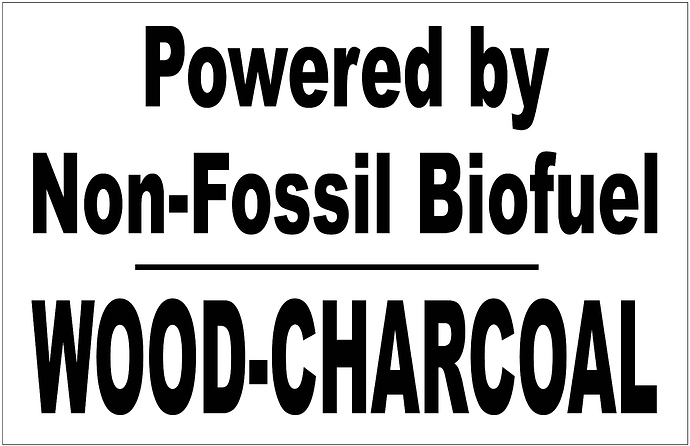 There is only one other truck, I’ve seen, that ADVERTISES what we are doing. This is mine. 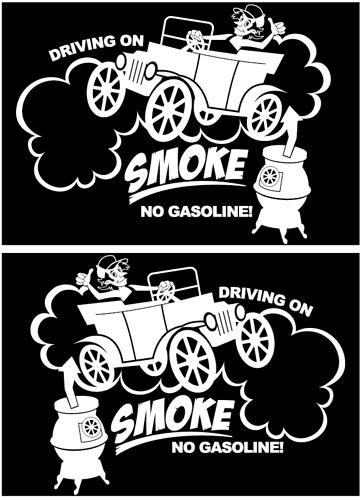 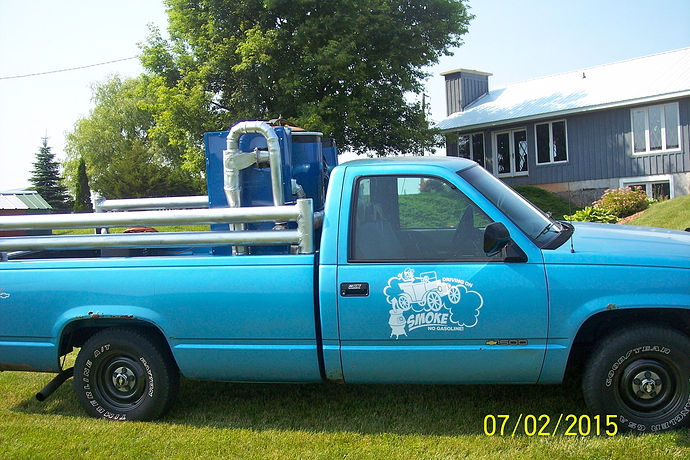