For many years now Max @gasman has been preaching to me (and others) about the benefits of the vacuum based automixer which he designed and Dutch John built. I’m finally freed up enough to give it a shot.

The inspiration was this little water tank, made to go under a sink and accumulate drinking water for a reverse osmosis filter system. We had such a system until the bladder went bad, and so I salvaged a tank. 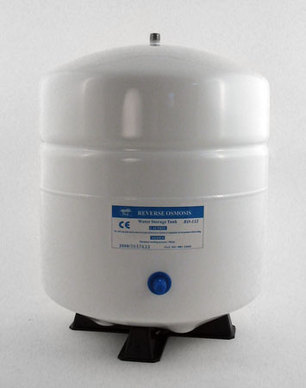 I cut off the top and bottom, and made a flange to go with them. This metal is extremely thin and tricky to weld, but the flanges are from heavy steel plate. 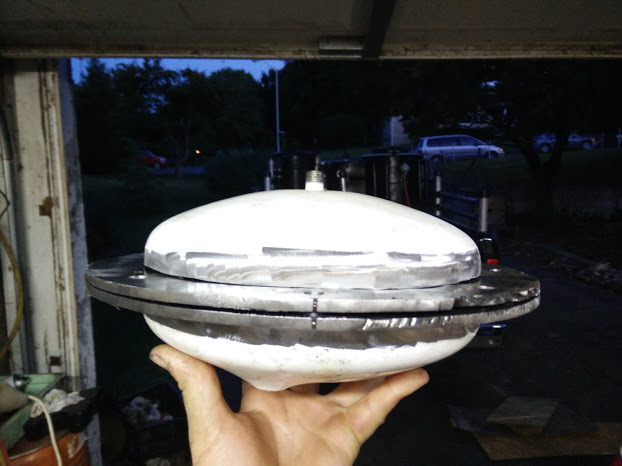 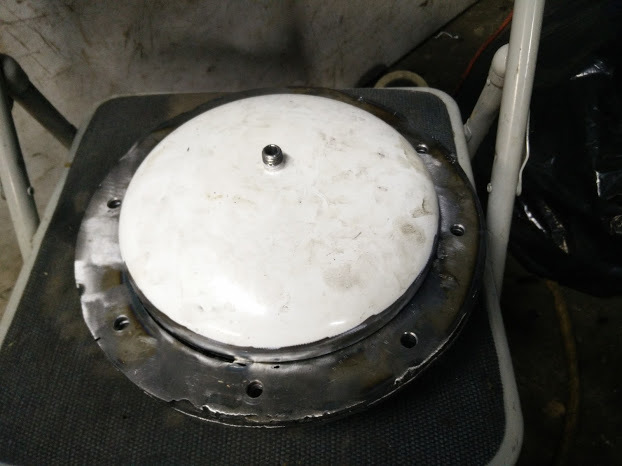 For my first diaphram, I used a 12" round piece of denim cut from old blue jeans, coated with silicone. The idea is to have a tough flexible and airtight material. I thought this would do it. 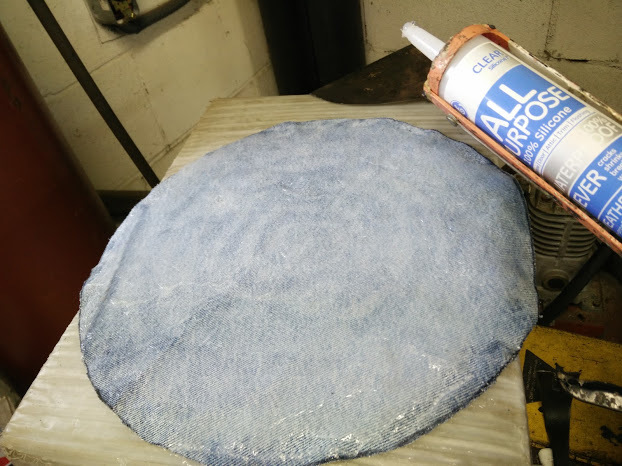 After checking for leaks using a bit too much air pressure, I found out the weakness in denim fabric - it tears easily along the grain. 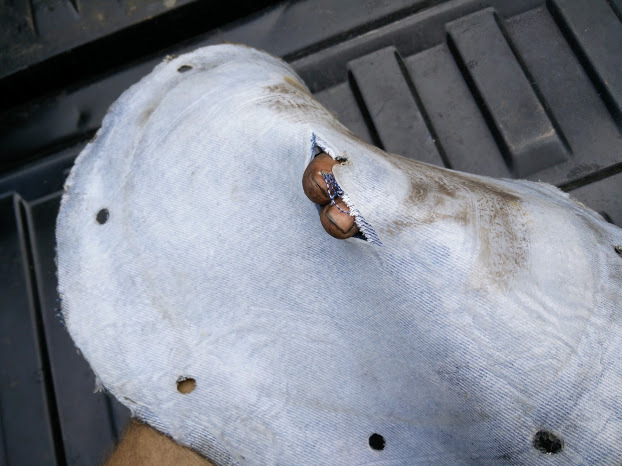 Now I’m using a piece of heavy mil plastic sheet, cut from a Morton rock salt bag (thanks @josephhauler). Not only is it easier to make, but the diaphram action is much more sensitive and works great. Video of the test is coming soon… here’s a pic though. 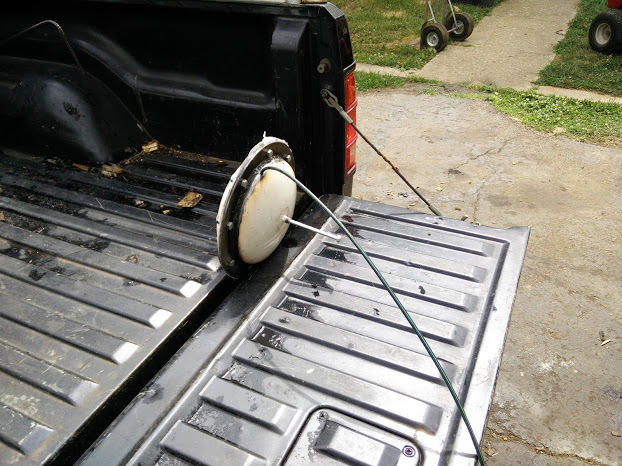 Next step is to install this with a linkage to see how it does on the truck.

Max has impressed on me that one of the important pieces of this system is a balanced air valve. If it’s not balanced it will suck on one side harder than the other and force the valve open or closed, overwhelming the diaphragm. This doesn’t matter in a manual cable operated system, because the friction is plenty to keep it in place. By contrast, the automixer’s valve linkage must swing freely many times a second.

To test whether the valve I made is balanced, I put it on the trusty shop vac. If it has any tendencies to suck open or shut, it will show up here. 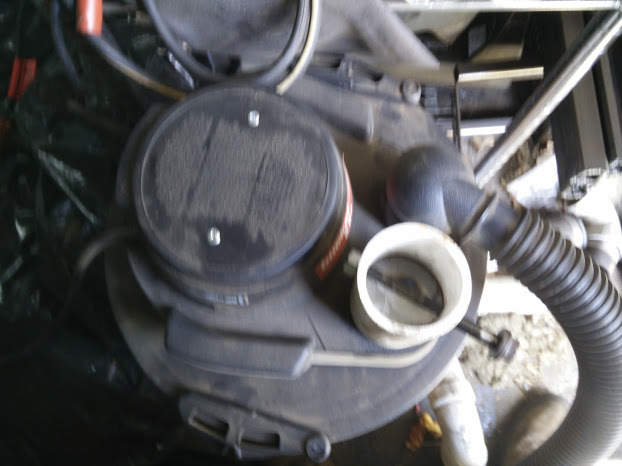 I also used this test to see if the existing valves were balanced. One was not even close, the other was good enough for a test. I’ll be trying that out first.

Do you think Neoprene would be sensitive enough?

We don’t want it to be stretchy, just thin and tough. I think heavy mil plastic is perfect, plenty sensitive… We’ll have to wait and see on durability.

That is just simply awesome.

I guess I’m lost here. Can someone tell me how this improved syn gas production?

It doesn’t improve gas production. It controls the air fuel mixture to the engine, automatically based on a vacuum reading. It works like this:

The heart of the unit is a diaphragm with a chamber on each side. One measures gas vacuum, the other measures fresh air vacuum (behind the air valve). If one is stronger than the other, the diaphragm begins to move.

Connected to the diaphragm is a rod, which pushes and pulls on a lever, which controls the air valve. As it pushes the air valve one way, the balance of vacuum changes, and the diaphragm moves the other way to balance it again… the air flap moves accordingly, and the cycle repeats. The whole thing oscillates and is very responsive to changes in load and vacuum levels.

Ok, I see what you are saying. Thanks!

I’ll let you know what these look like when it gets here. I’m thinking it will be good.

Are you going to run with just 2 of the existing valves for testing or going to bigger ones?

I’m going to test it with a single valve. I think that’s all I need to run it, for now.

I’d like to have both of them ganged together eventually but that may mean a total air cleaner rebuild… so far I’m just dipping my toes in here, I still want to be able to drive my truck by just putting the manual valves back in.

With wanting a 1to1 mixture woodgas to air I’ve been thinking about the valve size. Not sure what would be need but with the existing setup on the Dakotas probably not much need to size them much over the bore of the throttle body. Just not sure if that is to restrictive since we are putting the air and fuel through together.

So, if I usually run my air butterfly about 1/4 open on wood gas and had a diaphragm in balance connected to it, would that have to initially be set at the 1/4 open position to maintain the correct air mixture? Then when I start on gasoline I need it full open. How does that work?

watching intently… i’ve been wanting to try this for a long time.

we are putting the air and fuel through together

Nope, the gas goes in separately like always. This is just replacing the choke cable air controls. For me, most of the time, I have them nearly closed anyways - so having only one air source means it will be open twice as much, I think about halfway open.

So, if I usually run my air butterfly about 1/4 open on wood gas and had a diaphragm in balance connected to it, would that have to initially be set at the 1/4 open position to maintain the correct air mixture?

It will set the mixture itself, so if it needs to be 1/4 open it will move around until it settles there. There’s no initial setting, just make sure the diaphragm controls the full range of motion on the valve.

You don’t need a manual mixture valve in series with this, except to modify it from the 1:1 ratio. DJ had one, but apparently never used it.

For getting full open air, just keep a second valve around to be opened during gasoline running.

I did some further testing tonight, everything’s jury rigged but I wanted to see it move a valve.

I seem to be having more and more trouble getting the rod to move. I don’t think I’ve broken the plastic sheet; maybe the rod is loose inside. It does move when enough vacuum is applied, but it’s not nearly so sensitive as it was earlier. The linkage I added must be binding it up somehow. I was able to move the valve with enough vacuum, but it’s unresponsive to small inputs.

I’m realizing that reducing the friction is paramount; this setup generates very little working pressure and it must be applied 100% to the valve. Making it slide easier will be my next focus.

Did you put a stiff plate in the middle like this? 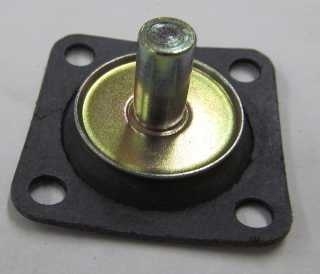 Right. What I’m trying to say is I’m not sure a valve (air or gas) much larger than one side of the throttle body ( that has to flow both) will help much.

OK, here’s the test of the second diaphragm from earlier today. Excellent responsiveness to low volume (mouth) suction and blowing. Well within range of gasifier suction. 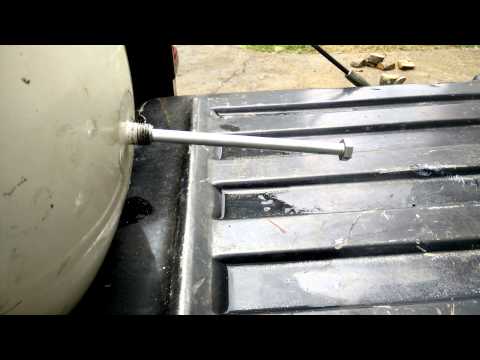 Wasn’t DJ using about a 4" diameter diaphragm? I thought Max mentioned some importance there.