Matt from Vulcan Gasifiers has offered to raffle one of his M-II units off at Argos, if there’s enough interest. Raffle tickets would be $20.

What do you guys think? 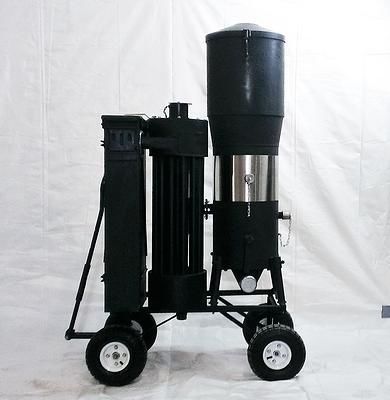 Hi Chris!
Tickets only available on site members? If it’s for all woodgas members here’s my $20 too. Pierre

It’s for anyone attending Argos. You can buy tickets at the event, not here. Matt should be glad to see the interest though!

I’d buy into that raffle

I’ll buy a couple of tickets

Its a plan then, parts are in prefab now

Im going to keep this thread updated as this build progresses. A lot of the parts for this build are in our prefab area now. I built the chassis for it this week, the first one we used an existing utility wagon we bought and modified. After building and still needing to put all the mods into it we decided to build our own from scratch and this is the end result.

We have one that is in its completion phase with the new chassis. they look much more refined. Ill take some pics of it next week. We should have this ready to go by the end of next week. Tickets will be available as soon as we get there. We are hoping to be in the area Friday night. We are nearing completion on the Argos machine. Should have it ready to go in the next day or so. Tickets will be available as soon as we get there. Just another update, just about complete. Just need the lid, flare tube and badge. We will probably do a special badge for Argos. They look really nice Matt.
I hope I’m a winner.

Hope it fits in my trunk. I won’t be driving my truck. Not quite complete.

Good point, we will bring tools to disassemble it, well get it to fit

MikeB you’re making me cry! I wanted to see the Ford…

I’m sad too. Just not enough hours in the day.

Sorry but im not going to be able to make it. I had an investor come from abroad late this week. Im still in meetings with this investor.

So maybe next year. Sorry again

We missed you Matt! Many folks were asking about the raffle. Hope you can make it next time.

Know what I mean Vern ???
Some people thought Bill’s gasifier was the one for auction … It worked really well once everyone helped get the bugs worked out. Bottom line is he built it !!
Lot’s of work.
I’m about done dealing with the wear and tear on my system. I never thought it would have to jump so many railroad tracks. I brazed the gasifier back to it’s mounting plate last night and got the monorator tank cleared. I got covered with tar.
Catch my post on bilge blowers. I put a serious warning on using them. It worked fine last night after I got home and was dead this morning. The brush holders disintegrate and fall apart …
Wayne wasn’t home yet when I called a bit ago but I think everyone else has made it home OK … My thanks to those that made it an event.
Regards, Mike