Has anyone made a waste motor oil gasifier?
Will oil smoke run a vehicle as well as wood gas?
My thoughts are to make a smaller unit and to use up hundreds of gallons of used oil.
I know there are heating systems you can make.
i know it can be run in diesels with some modifactions as a liquid, been there done that.
My question is car we run a car off the smoke?

I went through the forum and looked for anyone who has but maybe i missed it. the closest i found has adding a plastic bottle with WMO in it to the gasifier. People stated it increased power. That made me excited.

There are examples of waste oil gasifiers in the historic literature. Conceptually it doesn’t sound that hard to me. Make a rich, sooty flame with highly preheated air and you are there. Even a google search for “oil gas” may work.

Many of the old designs can be found in the links here:

This fellow on youtube is running a lawn mower on vaporized vegetable oil. I reckon you could do the same with waste oil. 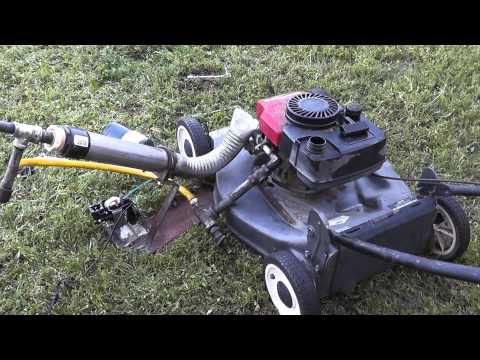 Thank you ill check it out?

Hello Ryan and welcome to the web site .

I think as long as we keep a good white hot charcoal base in our gasifiers we can run a certain percentages of almost any material that will burn . I see no problem with running some oil through the gasifier but keep in mind that when the oil burns it burns away. When wood burns it goes through a charcoal making process before it goes to ash .

In years past I have experimented with using a little used oil ( poring some on the wood ) but the used oil is worth almost as much to me as new oil . The farm machines and sawmill equipment doesn’t seem to care if it is 15 dollar a gallon oil or used motor oil . ( depending where it is used on the machine . )

I use used motor oil in my chain saws . I let it set in a container a few weeks ( settle out ) and pour off the top .

Ryan, I have been experimenting with a used motor oil drip into my charcoal gasifier on the atv. It certainly does increase the power. Gary Gilmore did some work on them earlier on using a kalle variation. The oil is really just an add on though for me. Good luck in your search…

This is a little off topic.I built a 304 stainless waste oil boiler which produces about 160,000 btu. Eventually I’m going to try to fire it with wood gas. 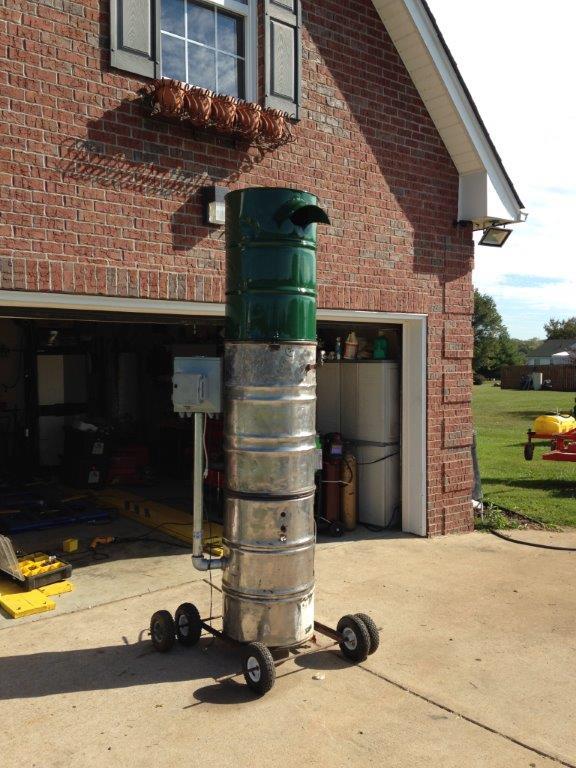 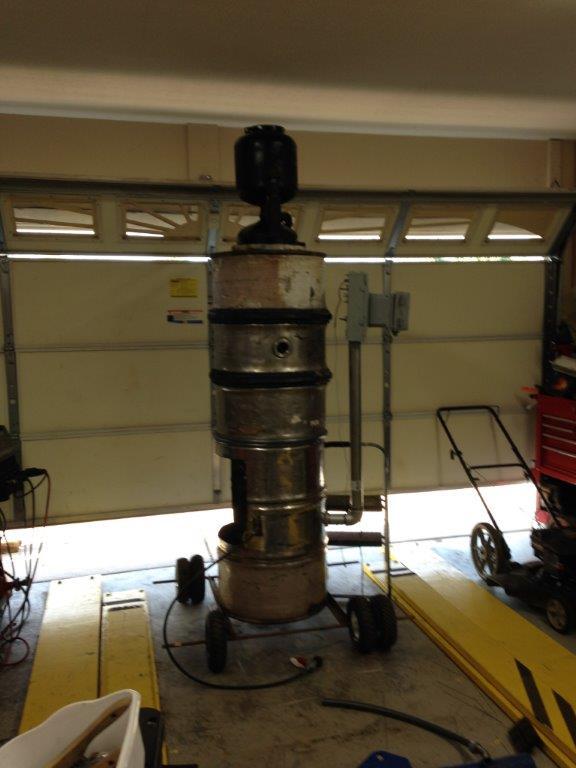 Stainless drums came from George Dickel Whiskey in Chris’s neck of the woods.

It needs more tires! 4X8 wheel trolleys would look like 747 landing gear. It’s working for me!

Filled with antifreeze it will flatten the tires if I only use 4 lol In fact, it is so heavy that when I moved it, the angle iron base sagged. Oh yeah, I need to fix that before winter : ) Another project I need to get done.

How does the saying go : if your hobby needs scaffolding to access it you are in trouble!

Thank you glad to be here.
Thanks for the info.
Who is Gary Gilmore and what is a kalle variation?

Gary is THE charcoal guy. He is on this forum.

Here is the Kalle:

Hi Ryan, the charcoal section is in the small engine section under charcoal gasification. You can also check out the yahoo group " charcoalgasifier" some pictures there of the unit. Basically an updraft charcoal gasifier with the air intake occurring through a vertical tube from the top.
David Baillie

Thanks,
Here is another question for you all.

Has any one used a pressurized storage tank to hold gasses for later use? and is this even possible? say you made wood gas on site and filled a propane tank on your truck with it, would the dilivery be the same or am i just dreaming?

Its been answered many many times… Not enough energy density in woodgas.

I don’t know how far Brent got with his oil burner, but his project page is here 460 bronco OIL GASIFICATION BUILD

Hi Ryan, If you want to use waste oil to run an engine, probably the simplest method is to filter it, mix with some kerosene and then use it to run a diesel engine. If you want to use charcoal as the primary energy source then waste oil can be use to boost the energy density of the charcoal gas. My 8hp Gravely tractor is fueled with charcoal gas but a fluid drip using waste oil is used to boost the hydrogen content of the gas. It really makes a difference in power. The oil is just dripped from a container into the air inlet that terminates in the hot charcoal. The oil is vaporized as it travels down the pipe with oil vapor hitting the hot charcoal.
Kind of fun watching it!
Gary in PA

Gary, you had that oil drip set up with my chunker at Argos if I remember correctly? I couldn’t tell the different from your gasifier or gasoline.

Hi Bill, Yes, I was using the oil drip. Water or any other hydrogen rich fluid also works. One benefit of oil is it doesn’t condense like water and cause oxidation (rust) If excess oil is fed to the gasifier, a portion of the oil will vaporize and enter the engine as a vapor. Kind of like gasoline.
Gary in PA

Using any waste oil in my water/steam coil works as a charm… it also reduces the core temperature if needed.

Long time ago they used a device to make so called “carbureted water gas”. mixing the fumes from hot oil with the gas from the gasifier. Not sure if that could be done with old engine oil …

I must try the oil in my plastic waste set up :-p afraid it will blow the lid off …