I haven’t posted much on the 93 dakota but it is still running strong. I filmed a little on the way to the welding supply this morning. Rather boring 63 mile drive but I enjoy it each time I see the gasoline prices along the way. I also put about 25 miles on the ram this afternoon. 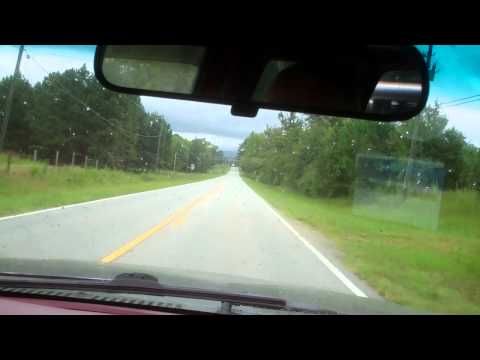 Hey there Wayne, I would expect horizontal rain with that hurricane nearby. Have you protected all the mounds of chunks from floating into your valleys?

The hurricane missed us, just cloudy and rainy.

High wind, storms and tornadoes rolling into Alabama this morning. School has been delayed three hours.

I was afraid my shed where I keep the Dakotas parked might not be strong enough to stand the wind so I parked them in the open. Be sure to keep yourself grounded both physically and electrically.

Almost two years back we had tornadoes that killed 250 in the state including over a dozen just a few miles from me.

Now when we hear the weather man say tornado we head for the storm pit and react very similar to ground squirrels hearing a hawk scream overhead.

I made a quick 300 mile drive today in the Dakota. I used dry wood mostly and it ran great.

Yes it was a little peach !! Good job Wayne…glad it was to your liking.

Good morning Gary and welcome to the DOW.

Sure wish we had met a few years back. Summer 2011 Stuart Perkins and his friend Jayson hosted a wood gas gathering a few miles to your east (10-15 miles south of Pittsburg Ks)

We had a great time and I met some wonderful friends for the first time. Just to mention a few and sure I will miss several. Doug D, Michel B, Billy B, Jim and Kim Hart, Doug B, Chris Seymour. Also a chance to meet up with my old buddy Mike L.

John Rockhold with Mother Earth News was there and I took him for a ride in this 93 Dakota and I think it triggered them sponsoring my trip to the Booneville salt flat.

Every day, Wayne Keith proves that wood gas can be a practical, renewable and sustainable transportation solution. Certainly not for everybody, but certainly for anyone with moderate welding skills, a sustainable source of wood or other type of...

Below a picture when we came through Joplin.

Thanks again to Stuart and Jayson. Wayne…My mom and dad live in Joplin and the tornado touched down just 6 blocks from there house. They where some of the few that was spared from that devastating tornado. I plan on getting my Dakota running someday and would love to drive it down to visit you sometime. My wife and I would like that very much. Maybe you can have some work planned for the mill and I can help you for a day or so. I sure miss my mill and want to build me a band mill just to be able to salvage the timber that is blown over or dieing on my place. I take my 930 cat loader and run up and down the creek looking for the trees that get washed out or have fallen over. Ive got a pretty good pile of logs built up. I don’t cut any fresh good timber on my place, but there is plenty of trees that get blown over or disease ridden that I heat my house and shop with without cutting healthy trees. Well thanks for visiting with me and I look forward to your comments as I proceed with the Dakota.

Hi Wayne and Gary, I didn’t get to drive past that peach water tower this year. I look forward to the next time. Wayne and I ran some time trials on that flat stretch of road north of him that got wiped out by the “Birmingham” tornado. I’m not sure if I ever want to go back there and see what was wiped out. When I was in Kansas, I met all kinds of “carpet baggers” at the hotel in Pittsburgh that were there trying to make money on the devistation that was in Joplin. I’m glad I made reservations. I stayed north of Kansas City the first night out on the way there so I could meet Chris Seymour at his home in the morning. Even though we were only 15 or 20 miles west of Joplin, I stayed away. I had to drive in the longest funeral procession I had ever been in on the way home. It was 105 degrees on the interstate according to my t-couple. I made the mistake of stopping at a Taco Bell for a bean burrito near Kansas City and got to be in the first few hundred feet of the first martial law interstate shut down I had ever been in. Thousands of police cars and fire trucks … It was over 2 hours before traffic began to move and then 30 mph for the next hour … I had to switch back to gasoline and raise the hood of the truck. I guess there was over a million dollars in wages etc etc etc not to mention all the late semis with rotten food etc etc … The poor guy got hit by lightning in the aftermath and cleanup in another thunderstorm. I had breakfast in Greensburg Kansas years ago and a few months later it was wiped off the map as well. Enough on them dang tornadoes. There is no rhyme or reason to what they follow. Had one go right over us in the early 90’s. The tree tops it took didn’t land on my property … Waiting for spring, Mike

Hey Gary, welcome to DOW. I spent many nights in the Apple Tree Inn there in Coffeyville, back in the late 90s building a fertilizer plant. Brings back memories!

Billy…The fertilizer plant you built is part of the oil refinery where I work. Im a machinist in the refinery and have worked there for 27 years. Bet our paths crossed going to and from work…small world. Got my 800 foot roll of banding today that I bought on E-bay… I have a dump truck and equipment I do on the side for extra money…I like to play to much…lol and time is hard to come by for me. Thanks for the welcome seems like a good bunch of guys on here. On the way home from Argos . Spent the night in Elizibethtown KY

After seeing all the machine at Argos it is hard for the vets to stir my interest .

When we can see the space rocket from miles away we know we are close to home . I had some thin garbage sacks with wood so I use them for the first dump in the hopper . 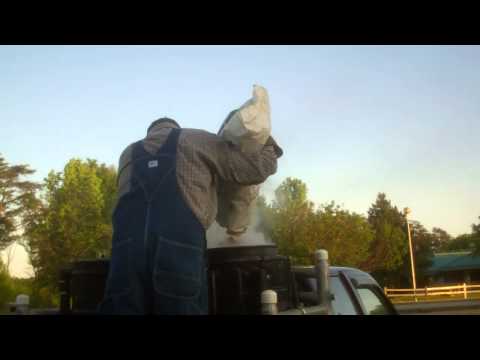 I’ll bet you picked that gasoline price sign in the background of your wife’s picture on purpose?

I also noticed you still have your “Sunday” button buttoned on your overalls, even though it was Monday.

I have learned if you are working around fire you should button the Sunday button.

By the way, in case there are any here who have never worn overalls, the Sunday button is the top one on the side - typically only buttoned for special occasions like church on Sunday or weddings, or getting your picture taken . . .

I put a quick hundred miles on the dakota last night and parked amount hundreds of dino vehicles but no one notice we were different . We are men in black.