It’s going to be a while before I have time to build a gasifier for the old tractor but I have made some modification so it can help with farm work . The hay fluffier I have requires a 1000 rpm pto and also the wood chucker .

Below are some pictures of the old tractor and the outfit I made to double the pto speed . It takes one or two minutes to switch back to the 540 pto. 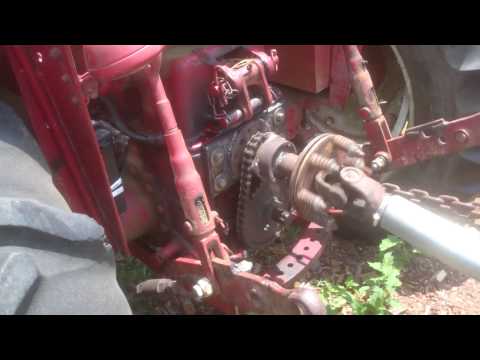 Well that’s clever, what kind of bearing will take that side thrust over the short shaft length?

Most of the time pictures are worth thousands of words so I included a few here just in case someone wanted to duplicate .

The bearings are a rear axle from a front wheel drive vehicle ( a mini van I think ) . Years ago when building my sawmill ( 96-98 or somewhere in that time span ) I robbed a couple of these axles off of junk. I have used this axle housing for the idler wheel that the band blade runs on . It has a lot of tension on it but has had no problem. This bearing is a spare that I had forgotten I had.

The application were I need the 1000 rpm pto are all light work and don’t foresee a problem with the bearings. However if there is a failure it may be from the light pto shaft that I used . It is and adapter 1 1/8 inch 6 spline to a 1 3/8 inch 6 spline with the base of it hollow. If it does fail I have some solid shafts I can weld on .

I was able to put this together and only add 3 inches to the pto shaft compared to the other shaft.

I once had a fordson major with a 1000 rpm pto and used this procedure ( visa versa ) to reduce the speed to 540 . I ran it pulling heavy machines like my Heston hay roller and hay mower until the tractor played out a few years ago but the gear reduction unit is still well…

Edit … The short axle does have two sets of roller bearing , an inter and outer . I just love it when a farmer makes a plan !
Necessity the mother of invention.

I like it! Does Tally look over your shoulder while you are planning and fabricating this stuff? I remember doing that with my dad many years ago and it was invaluable training to be able to look at a scrap pile and envision working parts an pieces not only of what it is but what it could be. What fun!

Yes Don , Tally is looking over my shoulder and likes to get his hands dirty and is lots of help when he is not at football training four days a week .( I can’t believe when padded out he is near 270 pounds and is fast enough that he is playing half back ( running the ball ) with three more years of high school. )

Most folks would look at my junk and see junk . When I look at it I see hundreds of items that could be built .

I don’t know when I will get a chance to put a gasifier on this ole tractor but I sure wanted to hear it run on wood. I ran a hose to the dakota gasifier and let the tractor run about half and hour .

Terry L , I knew you would want a video so here ya are . 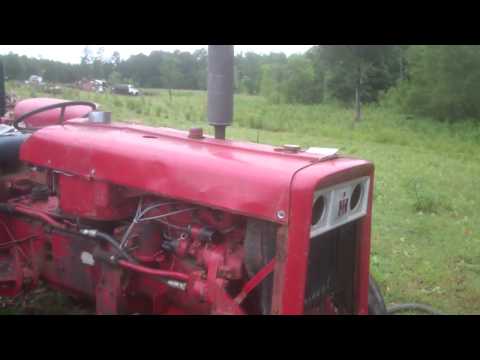 Thanks for the video.
So this tells me that you can run a tractor, generator or whatever from the gasifier in your truck.
That is real handy.

You are the Man!
Tractor sure sounds good, me thinks everything sounds better on Woodgas

Would there be a way to mount that pto speed changer below the tractor shaft for a better angle on that chunker or would it then be wrong for your hay fluffer?

The gasifier doesn’t care what is pulling on it just as long as it is in reason of it’s designed air flow. The gasifier on the dakota would be more comfortable fueling two tractors of this size .

The high speed shaft if mounted below the original shaft would be too low for most work . No big deal on the wood chunker and may be OK even with that angle but I have always liked to run these drive lines as close to straight as piratical.

It may have been a couple of years that I moved the chunker an it seems the front may have sunk a little in the ground . Also seems like the son and wife will shovel the trash ( bark etc. ) in the direction of the tractor forming somewhat of a mound. The mound doesn’t effect the other little tractor because it is so low to the ground.

Shouldn’t take but a few minutes to straiten the drive train out for the bigger tractor . Lift the front of the chunker about six inches , lock the opposite tractor wheel and give them a spin. A few shovels of saw dust and trash at the front tires all should be in line .

That’s awesome Wayne! Thanks for the video. Pretty soon the whole farm will be powered up with wood.

That old tractor sounds real good on wood.
It will be interesting to see what size gasifier it takes to fit that tractor.
Cool!

Hi Wayne, I have found that all those car and truck bearings are in 2 pieces so the original shaft needs to be run through them with the nut and washer to hold the bearing halves together. Maybe you have done this ??? … I converted my old S-10 to 2WD from 4WD so I could drop the oil pan when I needed to. I thought the front bearings were press fit and was also told this by the local expert. I drove it hundred of miles like this and on wood to boot. One day I pulled out of my driveway and took a hard right and the right bearing came apart. Fortunately the brake caliper kept it from completely being a disaster. I managed to pull it over in the gravel and had to jack it up and get some large bolts and washers and pulled it back together … I felt real stupid so warn others … I was going to pick up shroud material but my buddy was busy cleaning up tornado damage when I called him … Kinda same here. Hope to get the new one on something soon. I might sneak it in a “new” truck … Mike

Wish I had more time to work on the tractor but summer is busy .

Morning WayneK
Up early, early coyote spotlighting for my dogs I got a chance to see your IHC tractor videos in US-net slack time.
As TerryL says sounds real good on woodgas. Good to hear your voice too. Been a while.

AS you are gasifier mounting deciding take a look at this New Zealand vineyard gasfier system mounting.
Stills picture here:

A classic vintage; should travel well

A Marlborough winery is believed to be the first to power a tractor using vine cuttings.

Deck mounted rear and high behind.
Gives room for three point rear work.
Gives room for the front bucket work with still visibility.
Puts the system up out of bumping and hot (dry grasses!!) hazards.
This system is a charcoal fueler. And dual fueling a diesel engine to boot. But those aren’t the points.
The alternative system mounting possibility IS the point. My JD/Yanmar 950 is smaller than your’s and RonL’s IHC’s.
I’d sure miss not having a front bucket.
A video here if you are of a mind:

I’d thought the builder of this Kevin Parker was here on the DOW.
Can’t find the reference anywhere here. Still looking.

Hey good to see you traded out of the lumpity, bumpily front traction tires.

So, once you retire the little Chinese diesel tractor from wood chunking duty, you’re only “non-conformer” will be the Mercedes diesel running your sawmill, right? Before long, your wife will be after you to build her one of those “Herbie” Cadillacs.

Wayne, you are an inspiration to all of us. You build your trucks under a simple pole barn with a dirt floor, you use a retired shopping cart for your welding rig, yet you’ve taken old junk and made a “silk purse out of a sow’s ear.” You’ve proven that anyone can bloom where they’re planted without a lot of unnecessary fluff. We have no more excuses.

Thanks for sharing your life with us.

It’s always amazing to see (and hear) a new use for woodgas. Good work Wayne.

Real sorry I didn’t get back with you last night but I fell asleep while answering post.

Thanks for the link on the tractor . I’m not sure yet how the gasifier will be mounted but it will be a while and I will have time to think.

Thanks for all your input ! We all appreciate you !

Thanks much for the nice comments .

Hey Alex , My shed / shop / work area is dust and dirt floor only six months a year . The other six it 's mud.

This tractor was missing the brake lock-down mechanism so I made one for locking the brakes . Also my other tractors have a foot feed in conjunction with the hand throttle. This is handy and I caught myself trying to add throttle by foot with this one and no pedal so I made one .

While doing the above and having the tools out I went ahead and installed a cable push / pull timing advance .

On the car and truck motors with the vertical dist, the dist hold down bolt can be loosen and the weight of the dist, wires etc will hold it in place even if the bolt happen to work out. This horizontal dist held in place with two bolts and clips I think if they are left loose they might work out and the dist fall out . In the pics it is hard to see but I weld a tiny eyelet ( tiny nut ) to the head of the bolts with tie wire ran through to keep them in place . ( could have drilled a hole through the head of the bolt but much quicker this way )

I welded a tiny bolt to the hose clamp . All is adjustable and seem to work well.