I am a combination of a woodgas junkie and a lazy farmer. Add a pile of junk and this comes out. 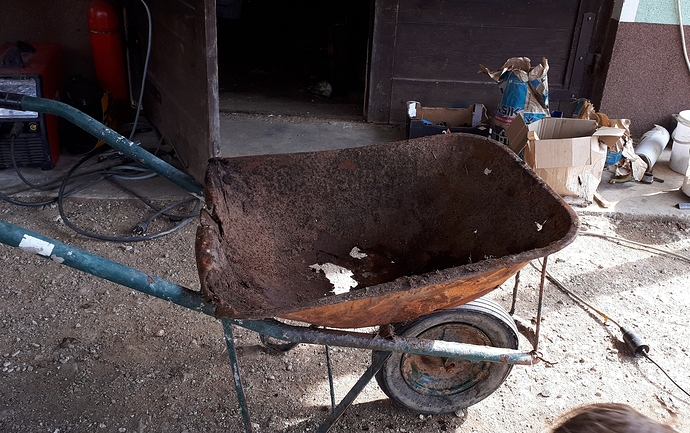 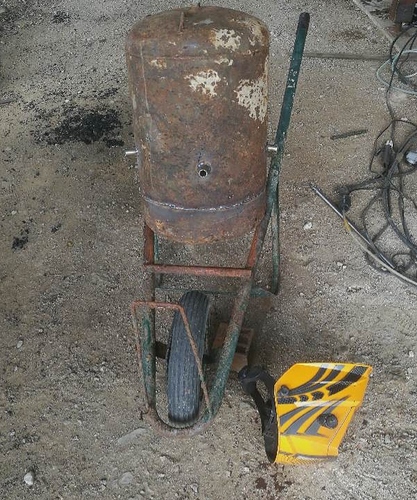 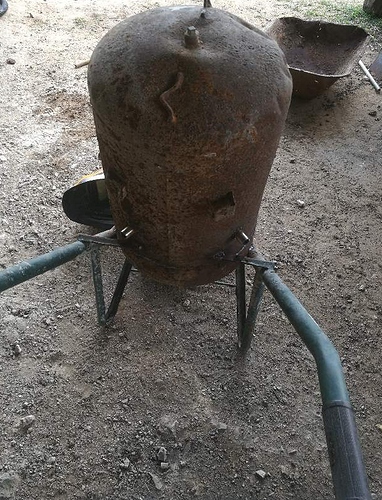 Basicly, this is a simple wood gasifier on wheels. The gas goes down straight in the burner under the gasifier. Burners combust the gas and burn weeds on the feald different burners for different crop configurations.

The idea behind this is l have noticed any disturbance in the soil triggers sprouting of weed seeds present in the soil. No disturbance, no sprouting. Thats the plan…

The gasifier is wery simple, it literaly took me a hour of work and a couple of welds on the old junk, but the fan is a bit of a problem. It needs to be rather high powered and cordless. Battery comes to mind, but it adds weight (and cost). What l was thinking is mount on a small engine, like a small chainsaw or something, and use it to power the blower.

That was a used and abused wheelbarrow!
A small 2 cycle blower with a throttle control would work well. I would NOT try to run it on woodgas. A pint of mixed gas will run for hours.

Ha, how did you know l was tinkering that option

I’m a bit lost here. What are you going to use the gasifier for? Flaring to burn weed? Don’t set fire to anything you don’t want to burn.
I use hopper juice for weed control. Maybe not a good idea close to edible growth though. 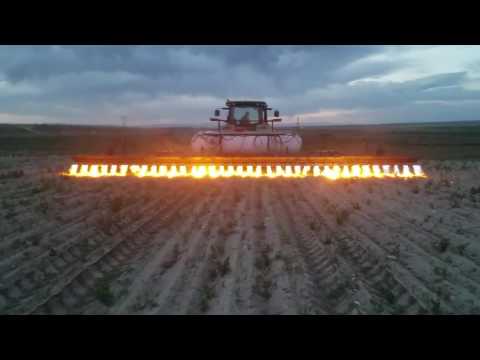 This is a much bigger version of what l plan to do.
Apparently weed burners been around a long time, but since chemicals became cheaper thain propane, noone uses them anymore.

Yes, l plan to make insulated metal liners on the side to restrict the flame to just one lane.

The point here is not to insinerate the weeds, just flash them with heat so that the leafs turn brown over a couple of days.

When I was a kid it was a common practice to set fire to fields. Check the wind and let it work to the far side with people already there to stop it. When I first move up here a field caught fire by accident and burned several acres. A few weeks later you could see exactly where the fire had been because the field was a lush green with grass. In the video above, did he seed the field then come back and singe the leaves of the weeds before the crop sprouted?? TomC

The point here is not to insinerate the weeds, just flash them with heat so that the leafs turn brown over a couple of days.

Oh! I just watched a video on organic farming, and the ‘new’ technique is you take clear building plastic and put it over the ground, and it raises the temperature, and they die. They said it only takes a couple of days in the sun with the clear plastic and a lot longer with the black plastic. I thought it was part of Korean Natural Farming (KNF) since it was mentioned with the plastic two different videos. KNF seems to focus a lot more on developing the microrobes in the soil, which is how I stumbled on it.

Organic farmers burn weeds down with citric acid, and coming back into fashion is just giving plants a jolt of electric.

The problems l see are that this only works in hot sumer weather. But its the spring weeding thats most important, at least here.

I have since found, trugh some testing, that burning weeds isnt ideal. Not to mention the fire hazard. I have found steam to be better, l made a small portable steam generator last year but it was underpowered, in a 3kw range. This year l will be making a full size tractor driven 50kw range boiler.

I’m no farmer, but that soil does not look very nice.
Looks dry and sandy half way to a desert…

I had one of these weed burners I bought second hand.
They do work very well but I prefer to do this in the spring when the ground is wet and everything is as moist as possible to prevent fires.
You just have to cook the weeds a little and they are suppress.
In dry weather if you do this weekly you can completely kill weeds and vegetation but you risk creating fires and dust. 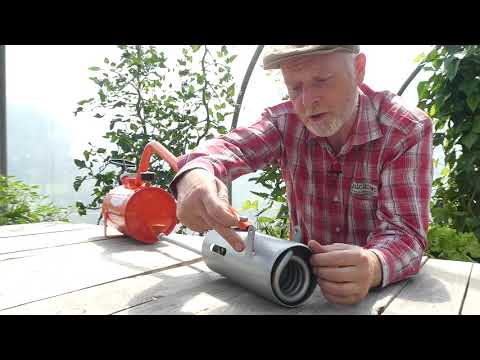 The problems l see are that this only works in hot summer weather.

Be careful with the steam, under pressure. It can go bad quickly. How much pressure are you using? I would rather go that direction if it isn’t high pressure. do you mix it with soap too? Like I think the homemade weed killer was soap ( like biodegradable dawn dishsoap), hot water and vinegar.

You are right about the plastic. the two youtubers that said 3 days, but both scalped the weeds/cover crop to the ground first. The uni study just rolled it, but they got a kill after about 2-3 weeks. They also mentioned you could do it earlier but it took longer… so I am not sure whom I trust. A lot of youtubers say they are doing something but aren’t.

I’m not sure what to believe atm. I might try it anyway or just cardboard or half and half. I don’t want to weed if I don’t have to, and I have an infestation of foxtail, so germinating those seeds to get rid of them is a good idea for overall long term weed control.

The rest of this is more or less just my notes so far for other improvements, that may or may not interest you.

I am back to nematodes for insect control (mainly grub types of things like cutworms or colorado potato beetle larvae) ( Rearing nematodes: Do-it-yourself guide - MSU Extension ) which there are several species, Which it looks like I can order the one type for 15 bucks from tractor supply, the 3 type mix ( H. bacteriaphora, S. carpocapsae, and S. feltiae) is like 60 bucks, and in the not worth it if I screw it up category because I need to multiply it to get enough for the area I need to cover. I’m not paying 500 dollars for nematodes…

and nitrogen fixing bacteria, which there are a couple to choose from which add 10-15% more nitrogen to the plant. which are Paenibacillus polymyxa and Azospirillum brasilense.

Sean, no need for pressure. Steam dumps huge amounts of energy to everything thats cold enaugh to condense it. Imagine a rake with hollow teeth, wich you pull over the weeded surface. Steam pouring trugh them, it comes in direct contact with the base of the weed. Thats what l plan to do.

The shift from liquid to vapour to produce the steam uses a lot of energy.

I wonder if it would be more economic to stick with direct fire.
If small enough you can always wet down an area before you flame it to reduce the possibility of spreading a fire.
I do this myself.

Exactly. But all this energy is then dumped on the weed as it condenses.

Think of this, you can pass your hand trugh a preety hot flame and you will not get burned. Passing a hand trugh a jet of dry steam will peal the skin off instantly.

I want to see more on this build Kristijan.
Bob

This seems very effective to get rid of weeds, i noticed this some years ago when pressure-washing some old garden-furniture, i have one old industrial pressure-washer, with a diesel powered hot water boiler, possible to crank up to 130°c, some days after washing the lawn was just dead brown in places, even a brown trail after the hose.
This lead me to use it to get rid of weeds in our concrete-block walkways. Worked perfect, and extremely eco-friendly.
Last summer i saw a local gardening company using a one of them “ATV’s” (two seater and a loading platform in the back) drive around with a propane-powered steam boiler and water tank in the back, cleaning weed’s near house-walls, and like.

I want to see more on this build Kristijan

I In theory, use the off-gas from charcoal to make steam to kill the weeds, take the char, dunk it in a fertilizer/innoculant solution to cool it, then drop it on the ground as biochar. Which is way too many things at once, and impractical, but it is late here.

Hey, its an idea Sean

Ofcorse, l will be reporting. But l admit, l have been lazy reporting on whats going on here lately… I will repair that imediatly.

been lazy reporting on whats going on here lately… I will repair that imediatly.

Yes please! We’ve been patient enough for too long Kristijan

Hey, its an idea Sean

I don’t know if you guys read dr seuss there or not, but after I posted that, I still couldn’t sleep and had images in my head it turned into something like this: While I am going overboard, it needs to add a planter right on the back. Kind of like one of these:
Вакуумная сеялка ручная . Высеваючий Апарат. - YouTube

Which I totally want, maybe no one else… but it needs some mods…