I have more wood trucks than I can buy tags and insurance for and they need to be driven more than I have time.

I have a 1984 ¾ ton ford I have used for experimenting and have had several gasifiers on it. The latest gasifier is about three years old.

It wouldn’t make a good long trip vehicle but would do well on a farm. It was my daily driver and farm truck until last winter when it was replaced with my dodge ram.

I have been driving the truck the last couple of days and hate to sell it but it looks like a used car lot here.

I am asking two thousand (add $50 if the gooseneck hitch goes with the truck) or best offer.

There are videos of the truck working (YouTube wayne keith woodgas)
If anyone wants more pictures just let me know and I will post. Somebody’s gonna get a heck of a deal here. Old Fords just keep on ticking! This is the whole system, ready to roll - just add wood. Thoroughly tested and broken in. You won’t get this chance very often!!

Like I told Wayne, this truck is worth WAY more than $2,000. Let’s hear some offers!

Is the truck capable of making the trip to NH? Sean has offered to do the driving.

Man if I lived closer to Alabama it would be sold. I paid $1,000 for my 80 F-150 project truck and still had to buy a welder, plasma cutter, and all the other materials to gasify it. I guess that is part of the DIY mentality though. Someone will grab that truck up quick.

Wayne, I don’t remember seeing that box in front of the front grill. Is that for storage or part of the gasifier?

WOW, NH is a long way from Alabama. I sure would hate to drive it that far and I just couldn’t guarantee it making the trip. I have driven it about three hundred miles in a day a couple of times but that was before I got the Dakotas. It is a three speed without overdrive. It would use a lot of wood or gas a trip that far. The last four or five years it job has be on the farm and short trips. With that said I know of nothing that would likely fail, it just a long trip!

One thing that needs to be done on the truck whoever gets it or if I end up keeping it is the intake manifold cleaned. Over the years the inside of the manifold has accumulated a carbon build up. It will not let the motor breath like it should (not allowing it to go to full power) and the only way to give it a good cleaning is to take the manifold off and torch it out.

Peter, Sorry if I didn’t answer your question but I am trying to be just as honest as I can.

The box in the front is a tool box. It has all I can carry in it plus the kitchen sink.

picture showing the front and even Mile La Rosa’s truck in the back ground . Sorry the old ford is already spoken for. It will be going to the Midwest.

I will buy the toolbox for $2,000 if you will throw in the rest of the truck!

Please sign me up for the bargain of the century. Thank you very much, Sir Wayne.

Be down to get it this weekend or early next week if you will be around.

GREAT DEAL. I THINK YOU SOLD IT TOO CHEAP. LOL

Hi Doug, It will take you a while to figure it out. Last time I rode in it the throttle stuck wide open. I figure we got up to 80 or 85 but the speedometer is way off because he changed the rear end, I think. It has a cracked windshield as well if I recall right. I’m glad it is NOT headed to the salt belt. It would be junk here in less than 2 years … PS, haven’t done anything with my websites yet … Just too busy and getting more and more tired … I hope Wayne finally got the title transferred to his name … BTW, did you post any of the videos and the stuff you took in Kansas anywhere ?? Mike

SOLD! To the man with the plan, Doug Brethower!

There’s still an awful lot of trucks around the Keith farm. Another may hit the sale block before long…

Thanks for chiming in with good tidings and well wishes. Trust all is well in Linden.

My guess is Wayne just told you the throttle was stuck wide open. He probably had a secret panel in the dash tied into the manual under dash cruise control just for your benefit ;~)

None of us are getting any younger.

I am going to sell this idea to the wife as a vehicle for our soon to be 16 year old daughter. Wish me luck!

I have a lot of video from KS, but it seems like John from MEN covered it all pretty well. Not trying to tweak you or anything.

Now that I can afford the fuel, I will try to get up and see you. I have every picture from your old site if you ever need any of them. Some awesome guerilla gasification tricks in that collection.

Great to hear from you.

Doug, Up until recently I wasn’t able to even access the MEN site. They had it set up so us dialup folks can not even get in. Many sites are like that. I thought it odd they would be of all sites. They worked on it some and I was finally able to access some stuff on their site from time to time but everything old is buried way back now. I have never seen anything related to Kansas on any site nor did anyone post stuff on the woodgas group or elsewhere that I am aware of. It was nice to see Mike B again in Argos and Doug D made it. I met lots of new folks there. Don’t even think of having your 16 year old drive that thing. It requires a lot of tweeking and she will probably try to text at the same time … ML

All smiles from Doug. (See below)
We drove about 125 miles today. More pictures and video to come. 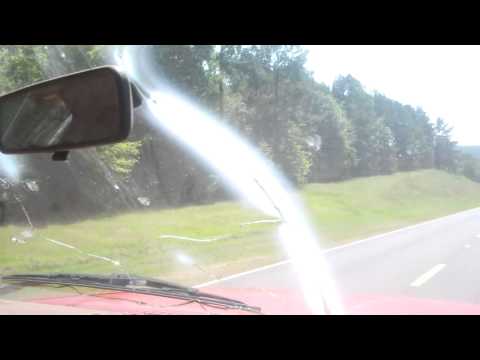 This afternoon Doug Brethower ( http://freedombiomass.com/News ) headed back home to Missouri in old red. (Picture below)

We road on wood gas Sunday night, Monday and today. We went through ever part of gasification we could think of.
I showed Doug how I looked at the gas to tell if it was OK. He tasted the char flavor to test for potency.

Old farm truck, long trip. I have my fingers crossed Is he making the whole trip on woodgas?