I have a question:

Should work Eduardo.
You won’t know what ratios will work until you try it.
Does it qualify as NA if it has a Roots blower?

That’s correct, are consider NA per Detroit Diesel’s manufacturing and advertising data.
There are other size motors ending in T turbocharged, and TA turbocharged/aftercooled.

Welcome to the site Eduardo. I don’t know anything about wood gassing diesels but wanted to say howdy.

Hi Edward, welcome to join us. I love two-stroke diesel engines, my little Holder AM2 also has a two-stroke diesel engine, which, unlike the Detroit engine, is built the same as a regular two-stroke gasoline engine without valves and crankcase air intake, which is not suitable for wood gas. Your engine only has an exhaust valve, and fresh air is supplied by a blower driven by mechanical transmissions, I think this would be quite a suitable wood gas machine.

Tone I don’t mean to side track but does your diesel have a windowed piston that lets in the air or does it use reed valves?

I am glad to be a part of this group. Thank you so much for the warm welcome.
With so much to read we will learn a lot about wood diesel engines.

Thank you as well for having me, I think there is a lot we can learn from each other.

I just read a little about the Holder AM2 gasoline engine, a nice 4x4 compact tractor.

my diesel engine has a windowed piston and I hope it works for me.

Did somebody say “DualFuel”!!!
In Iraq I ran the outlet of my Toyota gasproducer into the intake of a HEMIT, and the 8V92T picked up speed immediately. I think your 371 will do just fine.
That said, no tar…if you stick the blower rotor, you will snap the quill shaft (blower drive).

One interesting thought would be to arrange a decompressor like the Caterpillars had. With no compression, one could roll the engine first, to check for tar.

I still have several Detroit’s around the shop. Pretty familiar with them. It would be rather unforgiving of tar between tar gluing the rotors to the housing and said tar collecting inside the airbox and oozing down into the intake ports.
Being 2 stroke, it consumes double the air charge per rpm compared to that of a 4 stroke version of an engine with the same displacement. (3x71cubic inches = 213 cubic inches. So - you would likely need to design for 400+ cubic inches at what ever the peak rpm is of your application. Up to 2250rpm. It will consume roughly 15-20% more fuel than a diesel 4 stroke of the same power output as there are more losses in the exhaust due to exhaust valve timing and power lost driving the supercharger.
They were so easy to work on in the 80’s when there were shops that catered to the large number of owners. My boom truck had a horribly overworked 6v53 that would strip the blower drive about every 2 1/2 years. Once it failed 5 miles from the shop. I opened the access panel in the floor, reached in and removed the blower drive support. Then the drive shaft. Reassembled the drive support. Drove back to the shop spewing smoke like an old steam locomotive. Drive an hour to the dealership in the city. Walk to the drawer cabinets and pull the 3 parts I needed. Drive back to the shop and have the truck on it’s way again less than 4 hours from when it broke.
I bought a Drott 40 Feller/buncher that had been converted to excavator a couple years ago. Found out after I got it that the 4-71 in it had some issues. I was stunned at vast price increase for parts over 30 years ago.

Hmm, somehow I don’t care about your claim about the lower efficiency of a two-stroke diesel engine compared to a four-stroke one, because we shouldn’t forget that a four-stroke engine makes one turn more than an empty and full cylinder with fresh air, where there is a significant loss of energy. friction in the movement of the piston and other engine elements, pumping losses in gas exchange. With a two-stroke, some of the energy is put into driving the turbine charge, but this is less than with a four-stroke moving the entire engine assembly for this purpose. My Holder has no valves, no turbines, everything works like a two-stroke engine, like a chainsaw or a moped, except that only fresh air travels through the crankshaft space, and lubrication is provided by a piston pump that dispenses oil into the bearings. , which then accumulates at the bottom of the crankcase and is pumped out by the pump and pushed through the filter into the tank. It is not clear to me why they stopped producing such simple and efficient engines, only large marine engines are made, I read somewhere that they achieve up to 64% efficiency.

For 250-350 horsepower metro transportation and road haul truck engines it was going from one gallon of leaked/exhausts emitted oil A DAY; to one gallon a week for the comparable power sized four stroke diesels.
ALL public enities have had to closely report thier in and out usages since the late 1980’s.
Private concerns since the late 1990’s.
Lead in batteries. Antifreeze bought versus drain out collected. Engine oils Purchased versus drained for reclaiming. Even AC system refrigerants. Loss’s were declared as avoidable pollutants, somewhere. Big, big financial fines.
Steve unruh 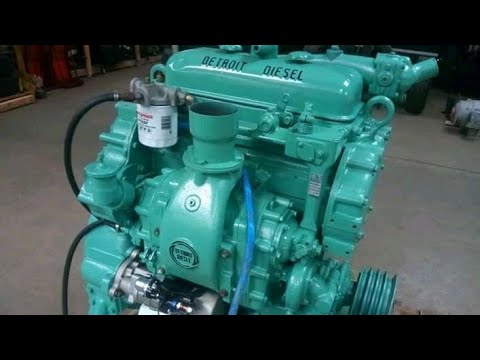 And then there is the “Runaway” problem… 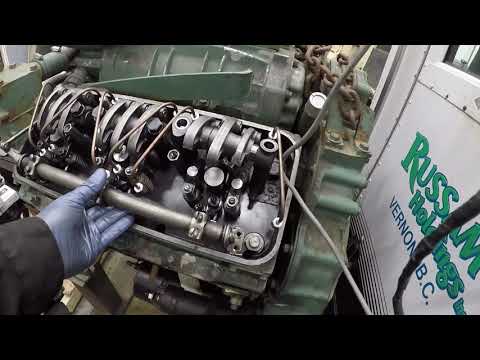 Runaways can happen with any diesel not just Detroit’s, though Detroit is more prone to doing it when the rack gets stuck. Also the auto start feature or “ghost start” those are fun … Worked at a dump truck shop that had a very old 8v91 in a Mac superliner. It would autostart once a week around 3am, come in the yard and it would be sitting there purring like a kitten. Thank God it never did that and then ran away, would have been the end of every truck around it when it finally lit on fire since those Detroit’s just run till they set fire. Damn reliable motors though, we still have a 1956 Allis Chalmers hd5 with a 271 at dad’s farm. Always starts with a hot battery and half a can of ether and the sweetest sound there ever was to grace an exhaust stack

Yes, yes! How sweet the sound. A friend put a 3-53 with a turbo and Jake brake in a Chev 1/2 T. We could always hear him coming long before he got int the yard. TomC

I have been on the hunt for a 453t for years to swap into a pickup and run on waste oil for many years. Something about a screaming Jimmy. But I’ll probably end up with a greasy old 12v Cummins for the availability factor

I’d settle for any diesel pickup as long as it’s manual transmission and pre DEF garbage.

There is limitations even within that, the Ford zf5 and zf6…oil pump driven. Failure point. Duramax had the same zf6, dodge nv5600, overheating problems, dodge nv4500, fifth gear nut backs off and boom goes mainshaft. If it were my preferance for shtf rig 12v nv4500. Backup 6.9 or 7.3 idi. Then detroit. Full mechanical control, largely emp proof. Little off topic but related the Detroit’s are full mechanical, just not the fuel milage and power I want for a shtf rig. But for ultimate cool factor the Detroit straight pipes takes the cake

Back in the 60-70s the joke was the only way to drive a truck with a Detroit in it, was to slam your finger in the door so you were good and mad at it.

was never a fan, I ran 350 Cummins wasn’t a Detroit could catch me on a hill.

Marcus, whats the science of that autostart?