Finally made it back on here since we got home. Wanted to thank everyone for the great meet up. Especially the Lemlers. They sure do a lot to make things happen up there. Maybe we need to talk more about the possibility of moving the meetup around some.
Wayne, I trust ya’ll made it the rest of the way home alright. I sure was surprised that we caught up with you.
We’ll be talking about ya’ll to a group from UAB Saturday. We have a group from the university coming then for classes. We’ll show the gasifiers along with all the other stuff. Thanks again to everyone. …Billy

We’ll be talking about ya’ll to a group from UAB Saturday. We have a group from the university coming then for classes. We’ll show the gasifiers along with all the other stuff.

Would yall be up to a swing by ( quick visit ) wife and I ? We could show them a couple of trucks . If you are up to it just let me know, also what time would be best for us to roll in .

Warning ! I have a Auburn tag on the ole truck . I’m sure the students from the University of Alabama will notice

Hey, That would be great if we could make it work. My truck is not the best for demo. But I need to check the schedule. The students are taking these classes for credit at the different universities. (We also have a group here from the National Agricultural University of Honduras, one from Guatemala, El Salvador, Equatorial Guinea, Bolivia, Haitti, Puerto Rico). SIFAT squeezes there schedule pretty tight, but I am working on having them over again Sunday for lunch and then the afternoon. If I that works out, which I think it will, it would be much more relaxed and less pushed. Would you be able to come for lunch on Sunday and then they would be here until about 4 pm? Collard greens, corn bread, chicken & kale soup, fried green tomatoes, sweet tea. The lunch is part of a “cultural experience” for them. You and Lisa don’t eat that kind of stuff do you? Lol. You could also see some of our other stuff while it’s set up.

Sunday would work fine for me

We are planning lunch at noon…I will get you more info as I get it. Look forward to it. The rest of you gassers are welcome too. Too far for most I know, but if anyone’s in the neighborhood—stop in any time.

Sorry guys for cluttering things up posting this in the forum. I tried to message wayne and seem to have failed. Need to get message to him so I put it here. I’ll try to figure out the other thing later…

WaYne, Looks like have quite a few for Sunday. For sure at this point we will have a group from Honduras. They are always very interested in the technology. They really need it down there. Their country is in turmoil. It has become the new murder capital of the western hemisphere. But this bunch is the cream of the crop for wanting to change their society. They often inspire me when I see their dedication to fix things and live their life for the betterment of others. These don’t want handouts either. Most of them came from very hard working farm families in the country and want to do things themselves. I enjoy helping such people. All of that to say that I am convinced that whatever energy or time you put into them won’t be wasted.

Lunch is at noon. Find out tomorrow more about the UAB bunch. And I think you are safe with your Auburn tags. Me and Erika went to Auburn and they haven’t burnt us at the stake yet…

Thanks for the invitation .

It seem the last several years I have DOW through ever part of Alabama except your area . It seems one doesn’t go through Lineville or Wedowee unless he has business there.

While I was a dog handler for the State I was called a few times to the Heflin area and the Talladega forest but never to your area ( must be pretty good folks there ) , The last time I went down that stretch of 431 was working a summer job in Roanoke while in high school ( 1967 )

I am doing a little experimenting with the dakota using larger fuel and pushing the miles up on it . This trip should get me up to about 2000 for the last two weeks . This is the first gasifier I have built that if done over I can’t think of anything I would do different .

“This is the first gasifier I have built that if done over I can’t think of anything I would do different .”

This is a strong statement. Most of us will most likely never be able to say this (thats for the guys who design their own gasifiers). My hat is of sir!

Good morning Kristijan and thanks for the kind comment .

Maybe I should add to the statment .

I can’t think of anything I would change given my wood supply, available vehicles , vehicle needs ,climate , driving conditions and the list goes on and on

Like all technologies, applications are always dependent on circumstance. It’s hard to sell an air conditioner to an Eskimo --------until he moves to Houston Texas.
Things were quite a bit different around here in 1967.
We consider Heflin “our area” too.
And the Talladega National Forest, for those who don’t know, is the southern terminus of the Appalachian Mountain range. The Appalachian Trail Society is working on moving the southern end of the trail to a spot on Flagg Mountain about 25 miles from here.

We just finished our big class. We had 40 people here from several different universities and colleges from 7 countries. Things went quite well. Our new building worked out quite well.

For tomorrow, as of now we have commitments from 14 people, and I’m pretty sure several more will be here. Hope you can handle speaking through a translator. There’s a real good one here this time around. And several others can help if need be. Look forward to seeing ya’ll. How many fried green tomatoes can Lisa eat?

How many fried green tomatoes can Lisa eat?

We both can eat fried green tomatoes till the cows come home . They are hard to beat

Fried Green Tomatoes, up North we love that Southern treat. Yummy. Just waiting for the tomatoes on the vine in our garden.
Bob

They are best in peanut oil, like a fried turkey, but that gets expensive.

Thanks Wayne for the class. I think we counted 56 people here today. You were appreciated. But I think Erika’s fried green tomatoes were even more popular. She says Thank Lisa for the help. I think I am going to eat some more of them now. …

Got any pictures? What all did you demonstrate?

We have some pictures from yesterday and today, but I have not quite figured out hoe to get them uploaded. I have some from Argos too. Today was pretty informal. Just lunch and Wayne showing his Dakota. Yesterday was a touch and go inch-deep/mile-wide introduction to appropriate technology as it pertains to “Hunger & Malnutrition” around the world.
Examples: Bio-sand water filtration, about 6 different kinds of low-tech water pumps, examples of using waste (trash) products for alternative construction, gasification, milling (lumber), simple alternative lighting options, and butchered some chickens to show the chicken plucker made form a washing machine. Stuff like that. I’m hoping to get some pictures up soon. I may need a primer on the subject.

A friend of mine (local neighbor) with a youtube channel was here today. I expect he’ll have some videos up on his channel in a day or two----of Wayne’s talk and a ride-along.

Hey Billy , Thanks much for the hospitality . Wife and I enjoyed the trip down in your neck of the woods .

We were impressed with all yall have going on !

The picture below is a land mark about half way between me and Billy . Any race car fan will recognize it . 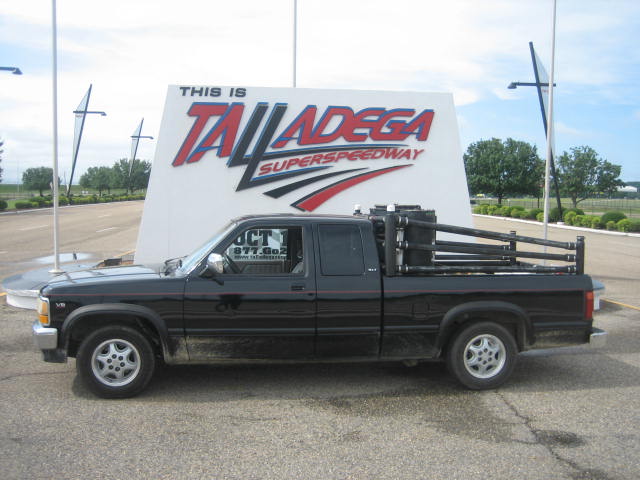 Great meal fresh out of the garden 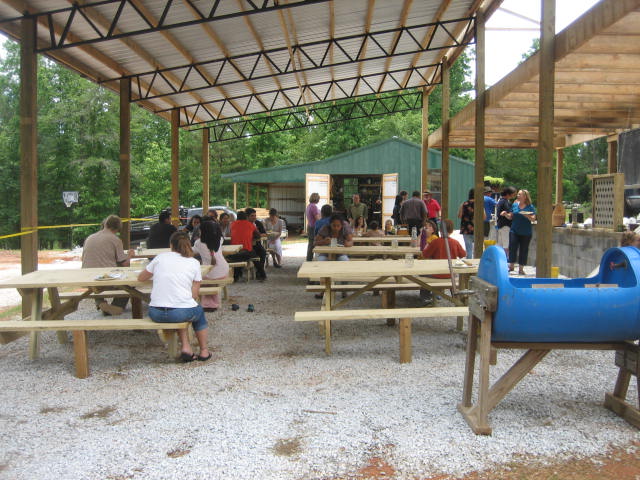