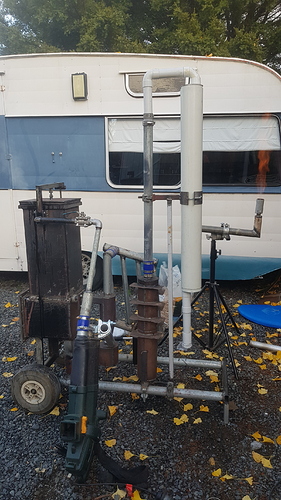 I read about having a thick plate at the reduction zone so i made the reduction zone out of a piece of 15mm plate cutting the hole with a hole saw was a bit slow . i insulated the hearth with clay dug from the forrest mixed with vermiculite tried the center jet on my first burn but quickly realized that was going to be a bridging nightmare and the flame looked all wrong and found i was producing tar and running in push mode due to the blower i had wont suck air properly so im running in push mode and the rope in the lid leaked badley

the jets and reduction seem about right now as the tar is gone im getting more black sootyness instead of tar.

Welcome Ben, from the opposite side of the globe and to the wonderful world of gasification.
Lit my gasifier 10 min ago. Just waiting for wife to get ready and we’ll be on the road and SWEM 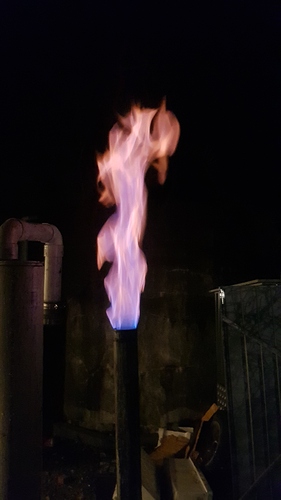 That is a healthy looking flare, you have there! Now to find a small spark ignition IC engine you can torture. I admire your study-build-test-modify-test-again approach. Great work under normal (whatever that is…) circumstances, but heroic in C-19 lockdown! There are no good excuses left for me now…

Hello BenO’ welcome to the DOW.
If I assume correctly that your goal is to IC engine fuel with your made woodgas??
Then once you are engine load fueling you will find you have enough waste heats from the combined gasifer systems shed out heats: and that engines shed out heat to in-the-winter reduce down natural wood chunks or chips from a 60% moisture to a gasifier loving 10% moisture of less.

Declaring this; and proving this premise will be my only true lasting woodgas contribution in the end.

This can be done with a very complex evolved heats-rising rational (but a dickens to build gastight) system like Ben Person and Matt Ryder both evoled into with all of the gasifer system heat making and heat shedding components mounted onto a hollow gas flowing mounting platform. The produced gas then flows down and accross cooling; the heats then rising up heat helping the rest of the system. Versus heats just being blown away wasted.
Ben Peterson even then on a few systems totally enclosed the engine generator with a tip up insulated cover (like a tip open truck nose) with the top of that a fuel bits drying bin. One load from that dried down and pre-heated then matching up to one gasifier’s hoppers worth of fuel loading.
And that is the real trick of it.
You do not “store” the reduced moisture fuel bits! They will want to re-absorb moisture out of our winters high humidty air.
Make as needed. And used as needed from the whole systemS useages.
You only need one good pre-fuel loading of wood bits, and system charcoal to do get this started.

Doesn’t have to be a complex to build integrated system as they evolved into.
Just use expanded metals screen walls made up baskets overlaying your current systems.
Hollow panels actually. Then you can hand shift these around from different drying positions until just-in-time needed for the next gasifier hopper recharging.
Hand work alright.
But you did say Covid-19 stay at home, lots of time on your hands, eh…
“Let no BTU’s escape unused!” Enslave them to fuelwood dry and warm.

Thanks guys will definitely look into the drying as i imagine that would make a big difference.
One question I have is what size motor would this run.
From what i could tell i was expecting this to run something from 7 to 10 hp but wanted to clarify this
I have
5 jets at .23 inch openings
and a 2 inch restriction
Did the conversions to inches

I’ve also got this idea to cook on the gas and use it in a califont instant water heater with the use of a gasometer as storage (another reason I’m interested in the push method) with a o2 sensor in the tank for safety and flash stoppers and co sensors where ever there could possibly be needed.
In order to do this the generator would need to be attached to the gasometer to run the air pump and I would need to pressure fill the gasometer then I’m thinking I could attach the generator with a standard adjustable propane regulator system to control the flow into the motor.
This way I can fill the gasometer at the same time as running the generator.
I’ve done lots of looking into gas laws and I’m not breaking any storing the gas and from what I’ve read as long as the gass in burning there is no carbon monoxide left after burning (natural gas creates co when it hits metal during burning) so as long as I’ve got sensors to identify leaks then it should be perfectly safe to use

Would be good to get others thoughts on this

Hey BenO’
For your engine size questions and some of the others refer here:
https://www.woodgas.nl
the MicroGasifiers link button.

For woodgas storage and even engine driven fuel drying search up NZ’er Doug Williams site. He did both in your climate. Plus 30 plus years of other developing.
Tricky site address of fluidyne.nz with a 250 z? x? prefix in it.

I hope you won’t starve the airflow of the radiator. 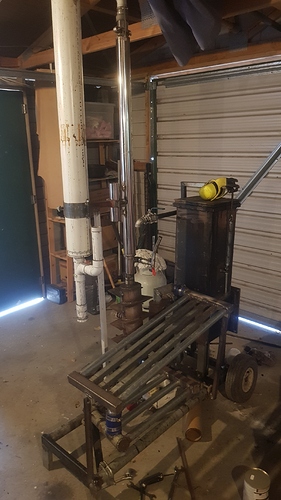 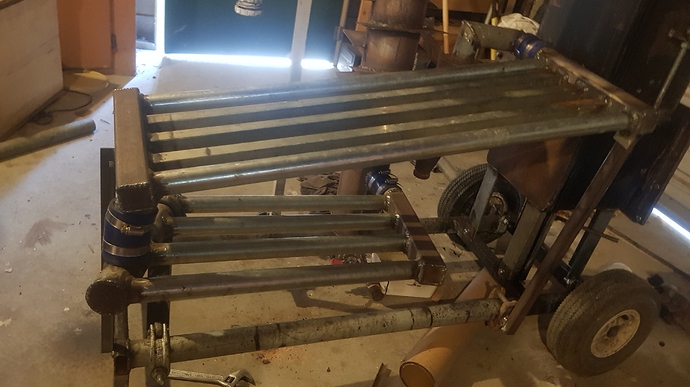 I’m building a bunch of bee hive oxalic acid vaporisers, first batch of a new design next week so have to put the gasifier on the back burner for a few days while I wait for parts (smog pump and silicone joiners but hoping to have it up and running again next friday 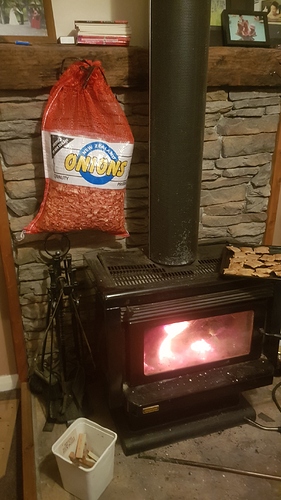 There you go Ben-nz.
A true working woodstover user.
Now we have a common use language experiences base to go from.

My inhouse wood stove is similar size to yours. Mine is a corner installed. I can behind the stove and to the sides of the stove take 50% moisture winter wet wood splits and bring these down to a wood stove useable 20% moisture. Actually kinda’ dangerous, needing a lot of hand juggling babysitting. So I’ve never pictured this.
Marine/mountain climate for me here and even summer dried down to under 10% moisture will air reabsorb to 22% by the 2nd 3rd months of the heating season.

Feel your chips often. The drier they get the more easily they will surface heat up.
Herrump. One well know woodgaser fellow (not me) almost burnt his house down in house woodstove gasifer chips drying. He said was fine when he went to bed. Sure still cool as still wet humid. His chips dried. Then surface heated just about the time his woodstove evoled down to hot glowing charcoal radient. Those chips began to smoke just prior to auto ignition, setting off his dog, smoke alarms, and his kids. His wife was very set off too.
On to the couch he had to sleep, then.

Oh. I cannot get Dutch Johns MicroGasifier link to load. He may have stopped supporting this. Maybe you can Internet “way back” his three small engine use info.
S.U. 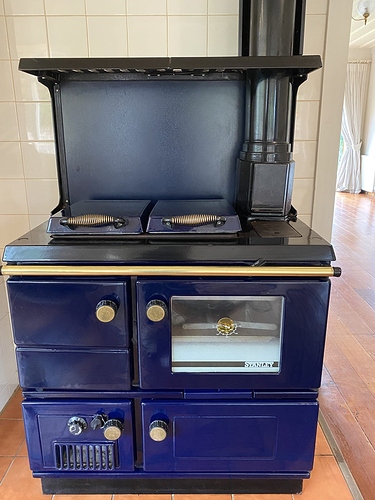 1335399180.jpg1152×1536 243 KB
We left the wood prep a bit late this year as we thought we where going to be moving for work but got it sorted now. A friend of mine had access to some forestry that had been cut down a year ago and he gave me a hand to split 5m3 of pine which should get us through nicely.
Finished my first vaporiser today. I worked the last bits out. hard to do it tidy with a mig on stainless but it didn’t come out to bad 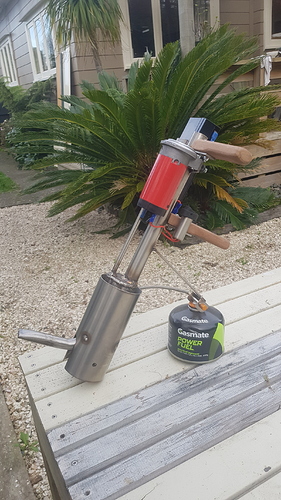 I couldn’t find MicroGasifier info and my maths on his calculations dont seem to work with the small engine so I’ve based it on the imbert chart and I believe I’m looking at about a 10hp motor with my setup.
So im going to use an Anemometer to measure the flow with the motor and the fan to get an idea if there pulling the same that way I can flare at the motor speed to test

If I remember correct from DJ the microgasifier he build on his lawnmower, it was a real pain to run it.
DJ is into art now, sold the Beast, gave away the lawnmower but kept the Volvo. Gave him a call a few weeks ago, but he didnot answer. A little complicated now with that Covid. Anyway, he is not into woodgas anymore, he moved further low tech.

Sorry, checked his site, still working! So, you can take another look.