Thought I’d document my conversion process for anyone else with a Cavalier in this year range. Here’s what I’m thinking so far.

I can’t ignore the Mass Air Flow sensor, and I can’t ignore this valve cover breather. Both just jam into the rubber hose going to the filter box. This rubber is very dry rotted and will probably disintegrate if I handle it too much more so I should just go ahead and build a new setup. 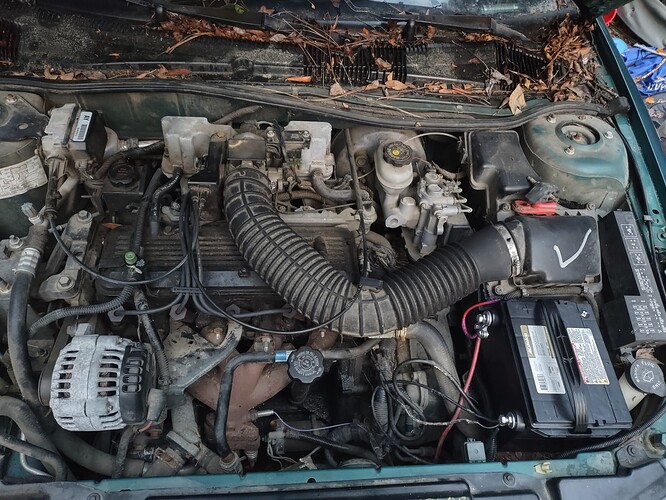 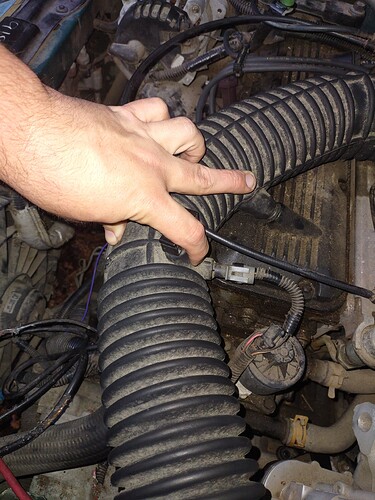 Fingers are pointing to the MAF and Breather. I appear to have plenty of space, I may also remove the stock air cleaner and go with a Pod Filter.

One more thing. The Fuel Pump and Injector fuse is combined, but I’m going to be running an E2000 Ford inline fuel pump because these J Body pumps just don’t hold up.

I think it’s for the best to not attempt to hybrid with gasoline, because these injectors don’t like running below 41psi. Really burns them up. So on or off only, fine by me this is a lightweight car so I think speed won’t be an issue with wood gas.

I don’t think an In Trunk unit is the best for this car, the trunk lid isn’t wide enough so you’ll have to fit everything inside the lid and that gets in the way with capacity. I will be using the mounting points one would use for a Reece Hitch adapter, those spots can handle a Class 2 hitch or 200lb tongue weight. I’m pretty sure I can build even a sturdy raw wood system that’s under 200lbs cumulatively. Here’s my cubit for trunk lid measurement. 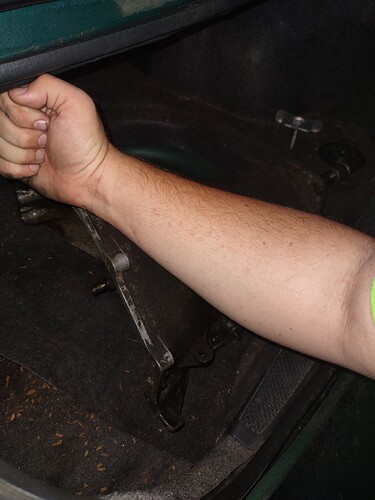 There’s nothing to cut away because of the frame that holds the windshield, and the lip for the trunk area. Remember this car is Unibody so everything is a stress member.

I see that you are using the biblical cubit for a measurement. Don’t hear that much anymore. You taking many animals with you?

Actually if you are going biblical the measurement should be from the elbow to the extended middle finger. They used the middle finger because people would question just how accurate that measurement could be and the finger was the answer. FYI. Don’t quote me.

HAHAHAHA, well then I guess it isn’t even as deep as a cubit!

Someone on my Facebook said “Americans are so allergic to Metric they’ll use body parts to measure” and all I could say was “That’s right, I do measure in Hands, Cubits, Fingers, etc!”

I can’t remember the name of the measurement between your thumb and pinky when splayed, but I have an issue with that one because I’m double jointed so I don’t know how far apart they’re meant to be spread.

Only animals I’ll be taking with this car are my friends.

Cody, that measurement would be a “handspan”.
Fits right in with thereabouts.

And TomH you know well why Americans reject top-down, fits-all dictates, eh.
You know the 100 year one hammering away about will-drive-you-mad wildweed that will destroy modern civilization.
I don’t figure you are one who ever bought into the Reefer-Madness; Feddy garp spin-dry.

Besides the Metric folks keep changing their hemlines too much to be credible.
Napoleon enforced original metric? Or the new, better, improved Systems International metric?
What next? Putin measurements?
Bullism, is bullism no matter what lipstick and perfume you put on it.
S.U.

Repairs to the car will have to wait until I get a better floor jack and some small jack stands. Since my big red floor jack was stolen two years ago I’ve been using a dinky little one that doesn’t reach to the proper lift points in the center and doesn’t lift high enough. Hopefully this week I’ll get something from NAPA or Harbor Freight. That floor jack weighed over 150lbs I’m amazed someone was motivated enough to steal it.

Was going to mount the in line pump closer to the engine since most of the fuel line is steel. There isn’t a decent place to put it.

It’s almost telling me I should delete the gas system entirely but that would just be asking for problems. Might set up a pony tank for the time being. Tried knocking on the tank and it didn’t do anything for the pump.

It’s almost telling me I should delete the gas system entirely but that would just be askin for problems. Might set up a pony tank for the time being. Tried knocking on the tank and it didn’t do anything for the pump.

Did anyone ever try propane out of a 20lb tank to get it going until wood or charcoal gas takes over? Don’t need a fuel pump for propane.

Wouldn’t I need a regulator to use propane safely? Not sure where to find one to put on the throttle body.

I’m just paranoid of excess gas building up in the intake or hose. I think Tone has a system he made if I could find it.

I could buy forklift parts, but to have it run worth a hoot I’ll need to buy a regulator/vaporizer and the Mixer. If I cheap out it’ll still run 200 bucks for those parts alone.

Then I’d need gas line, a new propane tank, and plumb it all up. The Mixer is vacuum controlled so it only lets out propane when the engine sucks on the system, that way you’re not wasting any. Vaporizer is heated by engine coolant to prevent freezing the liquid propane.

You don’t have mass airflow sensor on that car. What your pointing to is intake air temp sensor. The 2.2 is still speed density ( map sensor) with the 2.2. and the breather you can just get a very small k&n type breather and take out of intake stream to alleviate any soot from going in valve cover.

Hey Cody,
I tryed to look up the in-line against the inner l.h. frame rail EFI fuel pumps that Ford late 80’s-1995 used on their pickups and E-Vans.
Ha! Ha! Surprisingly hard to Net find for sale, something I can walk out and put my hands onto.
These systems whether gang-group injected or later true SEFI delivered a regulated ~60 PSI with V-8 volumes of gasoline fuel. Aught to work for you.

Realize true injector lifted valving can be run way pressure delivery down.
NOT true of the GM spider systems that must pressure pulse open an end of delivery line spray valve. Part of why I think fellows get such poor results hybrid’ing their GM pickups. Especially the V-6’s. Those systems did more to make Dodge pickup men than Marketing.
Your GM heat soaking coil pacs jammed between the engine and the fire wall sold a lot of folks over to Honda’s and Subarus coming out of the 90’s. Ha! Then they could experience buried PCV valves; trapped alternators; and Two blowing head gaskets.
Ain’t no perfect in this world. Just a lot of Make-Do’s what I need/want from it.
Marry the one who can cook.
Pretty is, as pretty does.
Regards
Steve unruh

Cody it will draw in some soot because where your pointing is the fresh air intake of the the pcv system. That crankcase will be under a negative pressure or vacuum and that’s where air enters valve cover…the vacuum source is on opposite side of valve cover by power steering resivour …so it will draw some soot across valve train unless you isolate that air intake. Look up a vacuum diagram and flow chart if your not following what I’m saying. It won’t be alot of soot as it’s a relatively low CFM of air moving through there but will definatley pull soot at lower than say 50 % throttle

Well you can’t just delete a PCV system, they’re in there for a reason.

I wouldn’t be plumbing wood gas that far away from the throttle body to begin with, that’s just asking for an intake event. The valve cover breather and air intake temperature sensor will be in front of the fresh air mixture butterfly on the clean side.
I can’t do much about the PCV that’s on the other end of the valve cover, since that’s part of the intake manifold/injection assembly behind the throttle body but I haven’t gotten one dirty yet.

Well you can’t just delete a PCV system, they’re in there for a reason.

Oh you poor dear boy, emissions related items were made to be removed by people like me. I have ripped off, destroyed removed and blocked off every vehicle I have ever driven. Your Mazda was a terrible one to start with all the vacuum controls and egr and other regulatable garbage that kills power

all joking aside, it changes nothing of performance to remove a pcv system, I’m not kidding when I say I don’t own a vehicle that has a functioning pcv system. Positive crank case BREATHER? yes please, aka slobber tube. Shove that excess crap back through a air intake and throttlebody? No thank you, if there is oil in my intake that means big problems. A catch can does just fine for me. I JUST changed the air filter in the yard truck, 2002 7.3 powerchoke diesel 4000 miles on it. SOAKED in oil, just begging for a runaway meltdown fireball of a insurance claim. Thanks for locating the breather on TOP of the air filter ford…

I beg to differ, PCV is to prevent sludging your engine and seals blowing out. The PCV system wasn’t put into engines for just emissions reasons. 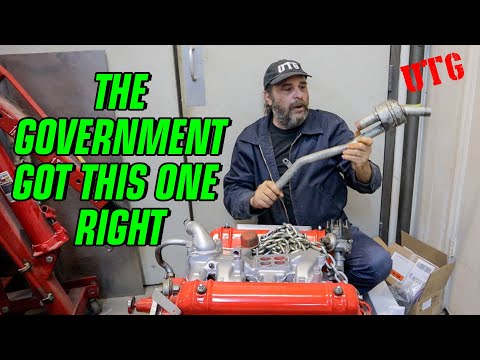 I don’t have a problem with catch can systems but I can’t stand my engines being covered in baked oil. The only reason I have just a filter on my valve cover breather in the Mazda is because I haven’t put in a barb for the carb hat yet. I kept the PCV in, still attached to the intake manifold.

Remote mount cures the baked oil problem, but around here being next to salt water all the time I don’t mind my rigs getting a good coating of oil, rust preventative measure! I don’t often disagree with anything tony says and he makes good points on that video I have watched it before. that being said i have never had a seal failure due to removing a pcv valve, and woodgas and is the only thing that ever caused me to sludge a motor

Not saying to remove pcv system…that part you pointed at is just the fresh air intake for pcv hence why it’s after air filter… You can literally just put a mini ka&n type breather filter on it… pcv has it’s benefit…it puts vacuum inside crankcase which boils moisture out and ring seal is positively influenced with negative crankcase pressure…my race engine get a high volume vacuum pump for the crankcase just for those reasons because pcv doesn’t work at wide open throttle… So yea if your wood gas enters after that part you will indeed be fine. Wasn’t trying to rattle you just point out the possible issue