Not sure how far I will get on this because winter is here and I don’t have a good place to work on a project like this. I want to build a gasified UTV using a 1986 GMC Jimmy as a starting point. 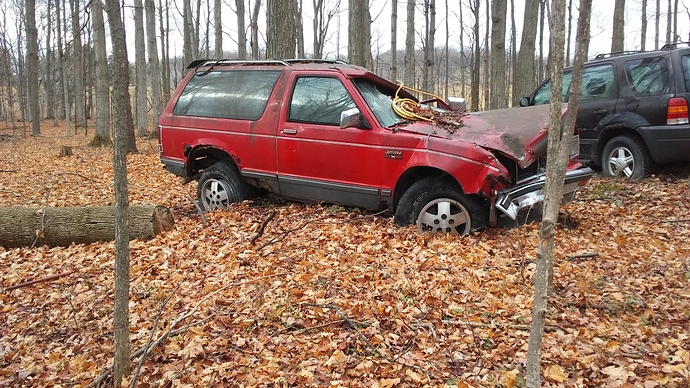 This thing has been sitting out for twenty plus years. Originally owned by one of my sons. Hit a tree on the front passenger side corner and got dumped off here. Then a tree fell across the hood and windshield. It has a 2.8 liter V-6 with some kind of throttle body I’m not real familiar with. I think these engines were made by Isuzu. 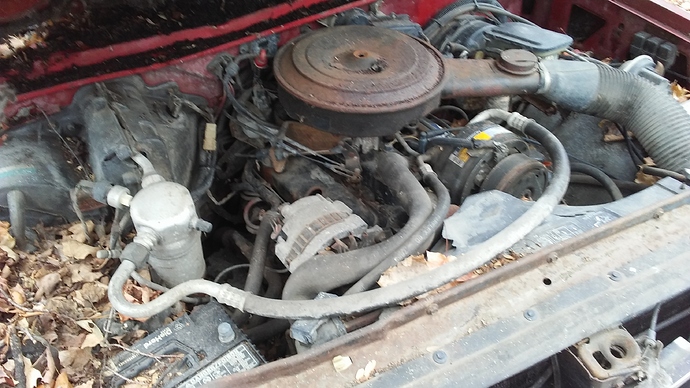 1116201155.jpg3264×1836 1.51 MB
Engine looks like it may be shifted sideways a little from the original accident. If so, no big deal. I’m going to just tear it down to a rolling chassis for starters. Extend the front control arms to widen the stance and provide more travel. I’m going to take the tires and wheels from my old Mud truck and stick them on here. 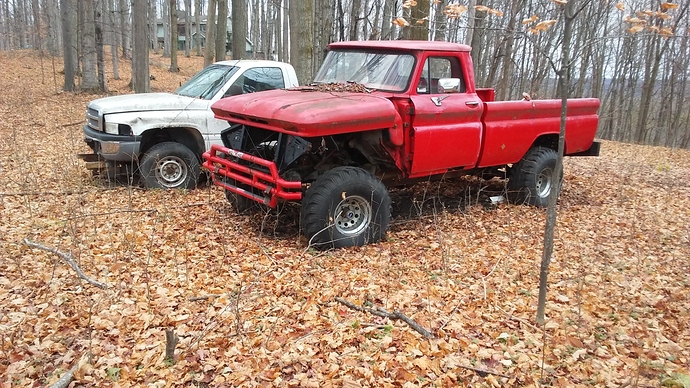 Not sure about what kind of gasifier I want to build. Kind of like to adapt the WK type I already have but that only has an 8" fire tube and may not be big enough for even a small engine like that. I figured if I started this post I’d feel like I had to get busy on this project so I did.

That was my last Hot Rod, if you can call it that. Built it with my then teen age sons trying to learn them something. They didn’t. We built that in 1997 and neither of them have turned a wrench since as far as I can tell. It has a 454 in it and originally had a high rise intake with two 650 CFM carbs. Detroit Lockers front and rear. Running in Mud was something they wanted to do. I hate mud. I ended up selling the fuel system so I could buy an engine and blades for my saw mill. Somebody got a hell of a deal.

Tom,
So, 454 big block Chevy, No gasoline fuel system, Distribuitor ignition, hmm. Sounds like the next Wood Gas Rat Rod to me…

Your 86 Jimmy is an interesting project as well. I don’t know too much about that engine, other than newer ones may have a plastic intake manifold, I think.

Still have a manifold and single 4 barrel carb on that Mike. The original 454 that was in it had a beefy cam to deal with the dual quads and one of my sons went over the rev limiter. Sounded like some bent push rods or something but at the time I was building houses and was doing one for a guy with a auto junkyard. He set up with what is supposed to be a rebuilt big block. My old engine and a thousand to boot but then we stuck it in and found out something was wonky with the torque converter on the trans so it’s just sat ever since. I have all the body panels. I was going to do a frame off complete rebuild but then the recession put me out of business so it never got funded. Kind of hard to let it go but I’ve been thinking I should sell it to buy a bunch of stuff I need, like batteries and some new tools.

Yesterday I tore apart my old downdraft wood gasifier. I needed to get it off the trailer it was on and move it where I could work on it better and piece by piece was the only way that was going to happen. Everything about it is heavy. I’m thinking all together it has to go five or six hundred pounds. Even the cooling rack seem like it’s a hundred.

I was considering using it to power the engine on this project. It was built to power a generator and only has an 8" fire tube so I’m not sure if it would fuel a 2.9 liter engine anyway. At least I’m going to get the engine out of that donor car and put it on a stand and test it with this gasifier but the overall weight of the thing makes it a little iffy for what I’m trying to do.

While I was doing this I thought I’d take a picture of one of my many failed projects. This was intended to be a steamer that could steam 14 ft lengths of 2x4 to be bent into hoop house frames. 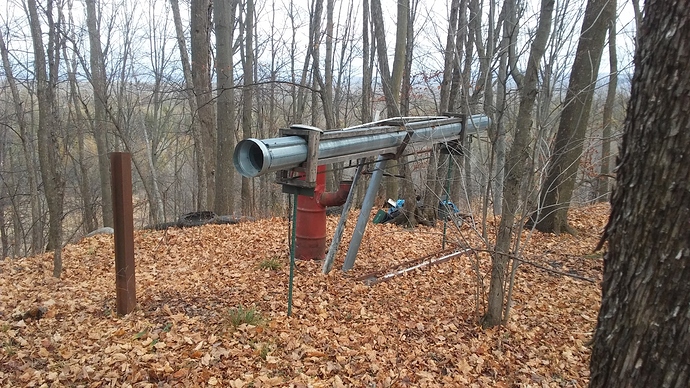 Anyway the next job is to get the body cut off that Jimmy so I can get at the engine and running gear. It’s out in the woods and sunk into the dirt so no way I could get under it to work from below.

Hi Tom, if you are a doer, you will have some projects laying around like this for sure.
Bob

It’s been a little over a year and I haven’t moved forward an inch on this build. Now it’s the heart of winter again but I want to do something. The wife and I have had some kind of crap going on for over 6 weeks that have pretty much kept me from doing anything. I don’t know if it was some kind of covid or what. Anyway not enough energy to do any real work. Seems to have finally let go.

I am still constantly thinking about Jan’s tracked vehicle. That’s pretty much what I want to do with that old Jimmy I have at the start of this thread. I would like some input. I am undecided whether to go full track, or just run the tracks to just behind the front tires and leave them free to move with either tires or skis, depending on the season. I am not sure how the steering for a full track vehicle functions. If the rear differential is locked how do you brake just one side for steering? I’ll gut this vehicle right down to a rolling chassis and may get that done during the winter since so far we have had it pretty easy. But what I know I can do is get some tracks made and get the gasifier back together and running, modified to be downdraft charcoal. I’ll make the tracks out of cut up tires. I’m wondering if anyone knows what would bond the rubber to rubber to join the sections without having to make a bunch of complicated hinged splices. Not that that would be a big problem but I’d rather go with a continuous loop. Just brainstorming right now. I should mention that the main reason I want this is to haul wood out of my swamp. All suggestions welcome.

I know what your LOOKING for, but knowing you a little I think this is what you NEED 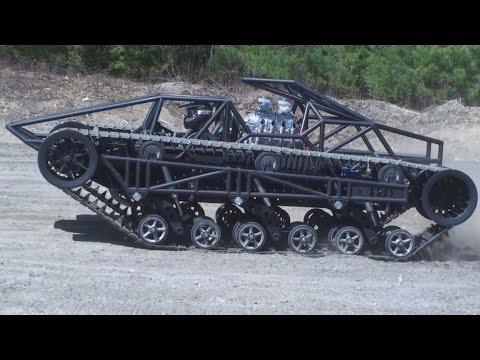 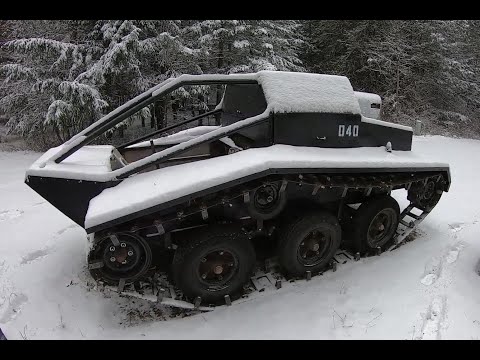 This is more low buck option for fun, not a practical working machine but simple ideas to go off of. Based on a 1993 Dakota v6 five speed 2wd junked out truck. Guy also has some very interesting other projects, gassifier, tracked wheel chair, spring jump shoes, invisibility shield. Pretty cool

Tom, we used these Hägglunds and Volvos in the service. Thirsty machines.
35 years ago though 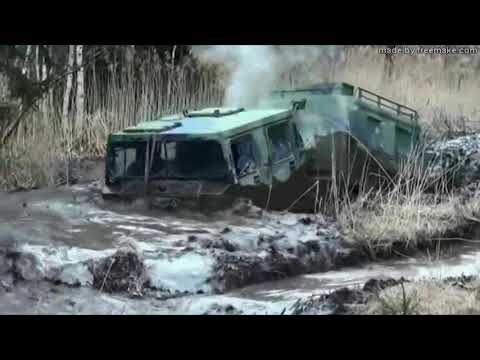 Don’t think I’ve ever heard of those JO. If I didn’t see it I doubt you could have convinced me one could pull a trailer through those mud holes. That was impressive.

I don’t think I’m going to put a blower on mine Marcus. I’d be interested in knowing the 0 to 60 time for that thing though. Number two is pretty close to what I’m thinking about. I don’t need it to go more than maybe
20 mph or less. And some hunters I know own a lot of that swamp and have cut miles of trails back through it. I just need to get around in them and they do real well with Argo ATV’s .

I’m going to try and get that Jimmy pulled up closer to the house but somewhere my wife won’t notice much. She was pretty happy when the insurance company made me get all my vehicles off the main property. They are on a back 10 now. separate land title. I’m getting kind of excited now. Been a while since I had enough energy to think about starting something.

IV watched many videos of these, they are like our American skidders…on tracks. On steroids. And meth

I take it the tracks on the trailer are powered, but how, hydraulic motors? or separate power source?

the tracks on the trailer are powered 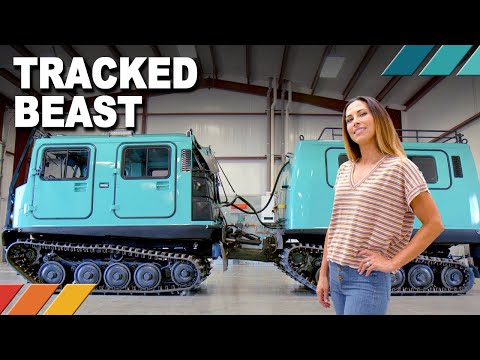