Ensyn has an established business supplying renewable heating & cooling fuels to commercial and industrial clients. …
Ensyn’s biocrude is a renewable feedstock for refineries for the production of renewable gasoline and diesel. …
﻿Ensyn and its partners have been producing renewable chemicals using Ensyn’s RTP process for over 25 years.
Ensyn’s Ontario Facility has been qualified by the U.S. Environmental Protection Agency (EPA) under the U.S. Renewable Fuel Standards (RFS2) program. Sales of RFO from Renfrew to U.S. heating clients are generating D-7 RINs (Renewable Identification Numbers) under the U.S. RFS2 Program.
I think they have one customer to whom they sell bunker oil for boiler fuel .
I think the company is majority owned by Chevron .

I do not want to encourage the consumption of methanol that is a deadly poison .
I just wanted to mention this company .
I really don’t know

Mokusaki is an alkaline food product and antioxidant which can easily become a favorite addition to your menu.
Mokusaku is pure wood vinegar (tree cell fluid). It has not been condensed, diluted or mixed with any similar substances. The product is made by placing the undiluted natural solution in a storage tank, waiting for the solution to naturally condense and settle, and then filtering the solution with activated carbon for refinement (i.e. to eliminate minute impurities). Provided in an easy-to-recognize acid resistant container, Mokusaku is a complete and pure wood vinegar. (100% Japanese product)

Combustion of Pyrolysis Oil in a boiler, furnace or turbine is the most straight forward application for creating CHP

I have thought about a stationary chp setup. But what kind of a power plant would a single family home use? Piston engines just don’t last long enough. Idealy the prime mover would be able to run continuously for 20 years.
Rindert

The ASC consists of a Free-Piston Stirling engine integrated with a linear alternator to produce electricity
The Advanced Stirling Convertor (ASC) is being developed by Sunpower, Inc. for NASA’s Glenn Research Center (GRC) with critical technology support tasks led by GRC. The goal of the ASC project, which is funded by NASA’s Science Mission Directorate, is to develop a highly efficient, low mass, reliable power convertor

Great, but this isn’t something I can buy or make.

I do not think it is that much more complex then the compressor in your refrigerator . You also need a way to store and regulate heat . That makes the thing a whole lot bigger , your hot water your heating and cooling . One Kw and hour 24 hours a day , this could work for a home , but can you store the power ? That is like another $10,000 .

There was a lot more here , regarding what products could be made from pyrolysis oil and what these product could be used for . I do not know what this particular guy is about .

Combustion of Pyrolysis Oil in a boiler, furnace or turbine is the most straight forward application for creating CHP

All depends on skill level / lack of better judgment. 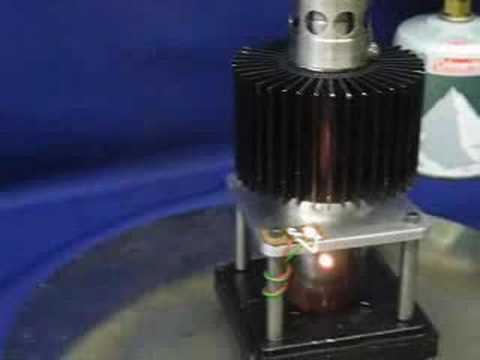 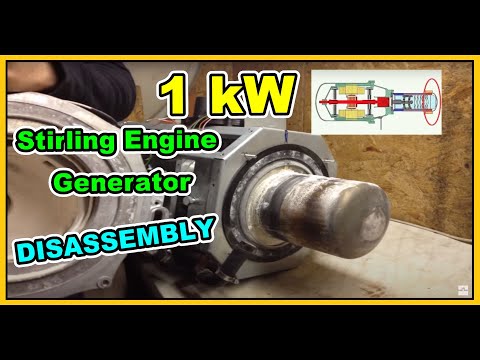 Woodmizer did briefly market a sawdust or firewood stove with a Sunpower 1kw unit around 20 years ago. That would be a gem.

Thanks, I got interested in Stirling engines about 20 years ago, but since then sort of let it drop. I feel that Stirlings just aren’t within my reach. The more I think about it the more I think there should be a good small engine out there designed for natural gas that would be almost perfect for woodgas. Don’t y’all chime in at once now.

Look up the “town gas” engines they used to use in England and likely the rest of Europe. Heavy built, low rpm, designed to run almost all the hours each year. I’m sure 'inefficient ", but in a CHP system the overall efficiency would be extremely high, and I would say years or decades reliability trumps other considerations, if there’s abundant fuel.

Yes, I’m thinking large slow-turning stationary engines reminiscent of the early days of steam, and as Gary T. said, Town Gas Technology. I think to get an efficient small sterling would require a lot of expensive materials and techniques, like the second engine above. I can’t imagine (or ever afford) the new price on that engineering marvel. And for what? 1500 watts of heat in to get 1kW of electricity?? Only if you have abundant going-to-waste heat.

I tried running my wood gas generator from wood gas produced in wood gas boiler and I exceeded safe operating temperature of boiler . It seems a better idea would have been to just run the wood gas generator on wood chips and divert heater loop from engine to boiler and not burn wood in boiler . The excess heat would be handled by radiator .

Or maybe aim for a steam engine?

I would say, though the Sunpower Stirlings are sort of a black box, they are extremely reliable ones. As I recall, the retail offering with Woodmizer was not that bad. If it’s a throwaway unit every 20 years or so, it actually seems quite good for grid tie and CHP. Sadly it doesn’t seem to be a commercial option now.

The unit I have is twice as large as I am allowed to use . I have limited the output . Has few hours but need extensive repairs . It is producing charcoal fines , I am just storing charcoal fines . It is producing hardwood distillates , I am just burning off the hardwood distillates .
Getting this thing was a mistake .
There is a thermocouple thermocouple thermopile to produce power from woodstove you can also heat water from your woodstove . I have just never heard of anyone running their air-conditioning from woodstove .

Trying to get organic certification , finally got approval to use approved materials as labeled . I may have problem from previously using non GMO seed from a seller that no longer responds to inquiry . So I definitely am not going to use charcoal or wood distillate in any capacity . But I am going to post something about it . Maybe it can be used in Japan ?

there was a ban on using activated charcoal in animal feed . Now it is allowed . no mention of Biochar .
There may be some restricted use for acetic acid as herbicide . Purchasing 20 % vinegar is expensive . use of ash is restricted . Research is being done to use wood vinegar to treat cancer .

Somebody mentioned about activated charcoal being largely a byproduct of petroleum, so it stands to reason it might have been suspect.

From the information Koen contributed, it seems a far better product can be made with the techniques we are already familiar with.

I think it would be hard to come up with enough wood distillate to do much more than spot spraying, but I wouldn’t be concerned in an organic context.

Somebody mentioned about activated charcoal being largely a byproduct of petroleum, so it stands to reason it might have been suspect.

Activated charcoal was like trademarked by the gas/oil industry, or something along those lines.

i havent quite figured out whether it is yay or nay, but anything distilled falls under processed catagorically to the organic standards. I thought it was allowed since it is from an agricultural product but possibly not for animal feed or caring. I believe it has some carcinigens in it…