I Love to Hate my Job: A Journal for our Times

Off Topic, but on our minds daily. The things we do (or did) to make a living, or what our crazy experience was, or what we saw that can now be told, or what I did Today.
In order to move these conversations from “Bug Reports Go Here”
Maybe @Chris can “Paste it”.

Not much going on today in fantasy TV land, Cleaned some cottonwood and dandelion fuzz out of the air conditioner condenser units, went to the dentist to get a tooth re-filled (Long lunch break), Looked around to see which items I want to borrow for Argos weekend, (It’s OK I have permission

) Sanded a wall patch, will go paint trim with a brush, If nothing important breaks down…

Leave your brains in the dry and do as told…

One general foreman used to tell us we were metatarsal scum.

I invented the INCO all contingency emergency procedure!!!
I did its true!!!
You wave your hands above your head and run as fast as you can in small circles screaming the foulest language you can…
Until someone starts to listen and comes to help you put out what ever the fire is HA HA.

I once told the manager and some superintendents that we had an situation in the switch yard and we need to call #1 sub to turn off the power.
One of the bosses told me no everything is fine.
I said no it is not and proceeded to implement the INCO all contingency emergency procedure…
I was told to stop and go back to the elechicken shop…
Then the fire trucks and hydro crews started showed up asking for keys or bolt cutters to get into the switch yard because it was on fire.
After several minutes of negotiation the security people let them in an a town of 30,000 down the line has no lights or heat for the rest of the day. HA HA

My old partner was getting close to retirement and liked to say.
"And this is exactly what we said was going to happen just last month "

Well, I changed jobs about six months ago, and I love it! Interesting work, an I am really appreciated. This is rare to find, and I am one lucky dog to have found it.

Thanks Mike. I wanted to say something else about the Mazda plant but didn’t want to do it in that thread. The plant had been a Ford foundry. I worked in there many times before it was sold. Converting a foundry to an assembly plant is an ambitious project, but it was gutted and the floors all paved to looked about like supermarket floors. They actually waxed and buffed out the concrete. We got in there before any equipment was moved in. It was surprising that none of the Japanese engineers spoke any English so we dealt with them through translators. That was fun. Anyway first thing they did after the floors were paved and finished was paint all the lines for the aisles and painted lines for where each piece of equipment was to go, labeled for the component. All the Japanese workers all wore uniforms and hard hats with chin straps on. When we would walk around the empty painted floors they got very upset if we didn’t walk in the aisles and cut across vacant areas. We actually had meeting about it. I have worked in a lot of assembly plants but that was the weirdest by far. Unbelievable how rigid and unquestioning of authority those folks were. Hard to understand how they practically overtook the auto industry at that time.

JO,
When one of my former coworkers opened the envelope with his paycheck inside, he would pretend to read, “Not a winner this time. Play again.”

none of the Japanese engineers spoke any English

I ran into the same thing at Nissan
They were all short guys with a couple of cameras around their necks too.
I thought this is what Japanese people were like until the bosses from Japan arrived.
Then I realized the first group were nerds…

Nissan was not the very best experience it left me feeling like I was not wanted.
A Boss from Japan listen to how eager I was, I used the word WE a lot.
Everything was we ( we could make this work better, or we could to that faster if … )
This Japanese manager then told me something that sticks in my head to this day.
"We are Nissan, you work for Nissan "

BUT those nerd engineers were very nice I liked them a lot and stay in touch with a couple who stayed in America.
Then they laid everyone off moved the industrial div to a southern US state and all the Japanese people left…

“Not a winner this time. Play again.”

I worked at a very big plant and we ran out own lottery.
You put 5 dollars and your badge number in the pot every pay day and they would draw a random number.
This went on for a while with no winners and then one day the jack pot.
The winner was left with garbage bags of 1 dollar bills. ( correction was 1 dollar billls or maybe twos, this is back in the day of folding money now 1 and 2 dollar are coins up here not sure. )

Security had to help him and escort him to his car ( worked out to several thousand dollars )
Management because aware of this and forbid us from doing it again.
Later we came up with a 50-50 draw, got management on board and donated a fair chunk of coin to the local food bank.

Another one we had was INCO shines.
We would get the guys with the longest shaggiest hair to get sponsors on the crews and we would shave their heads ( some guys had hair to the middle of their backs )
One guy had the hairiest back in the division…
We got him to let us shave his back ( at first he was a little stand off about the whole thing )
His back however raised close to 1000 dollars for cancer.

Something we lost over the years in strikes was that spirit of fun.
No one wants to really collaborate on anything anymore.
Ya we still do food bank drives and donations to the United way but that’s it.

Sad what bad management and an apathetic hostile work force can achieve when they don’t work together.
They can achieve absolutely nothing 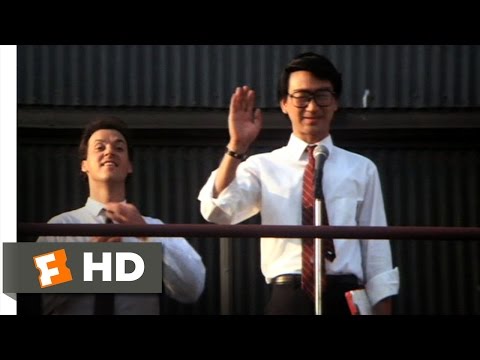 Morning exercise used to be a pretty big cultural thing in Japan. It’s still done in schools, and they have a radio program you tune into if you’re at home.

At Gold Corp, Hoyle Pond they made us do morning exercises and they aren’t even Japanese…
Just nuts…

Gosh I sure do miss the 80s sometimes.
Not the whole death from above Nuclear part, but definitely the slower pace than today.
Or maybe I was just faster moving back then I dunno

I have been overcome by a wave of nostalgia and I am going to watch Gung Ho again for the first time in at least 30 years…
What strange days we live in that I can watch that from the comfort of my own home.