Ever since I melted firebrick in a giant Gilmore-style gasifier back in 2015, I’ve been wanting to try a liquid-cooled gasifier. It isn’t very big, so far I’ve only run a 10hp generator on it.

It is only efficient if I do something with the diverted heat, such as running an oil-to-water heat exchanger to my hydronic system. Otherwise it is laughably inefficient, I think.

I do have some videos up on youtube of the construction so you can see exactly how it went together and what kind of flares it can make. I did add water drip, not because of damage to any part of the reduction zone, but because it kept getting a huge clinker. 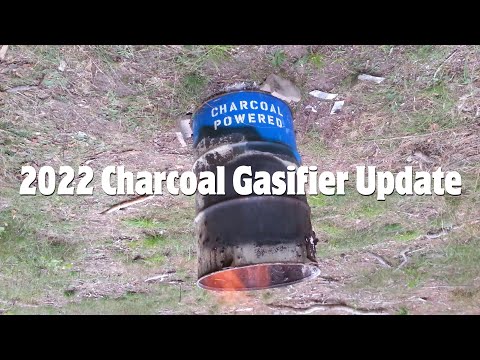 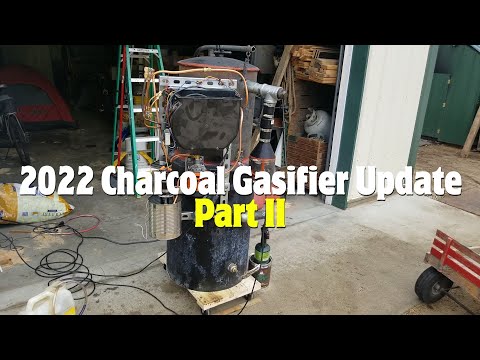 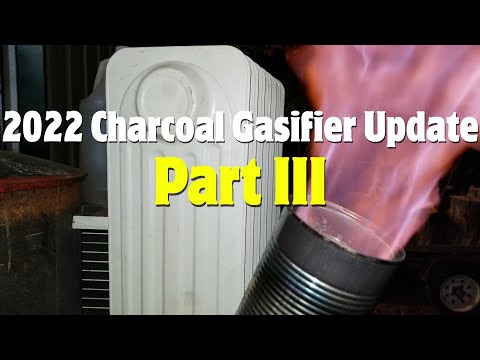 I don’t know how I feel about oil being the cooling agent, but since you’re cooling the oil back down it can’t be too bad.

What’s the diameter of your nozzle and how far is it from the grate?

Do you plan to drive the Lumina with this or is this more of a stationary setup, or a thought experiment?

Are you moistening the charcoal before adding it? In my diagonal draft tests I didn’t make any clinkers, but I might not have ran it long enough to make them. Charcoal was fairly damp judging by the dew developing on my hopper lid.

The Lumina has been recycled.

This is a thought experiment and a stationary setup, until we can cool the hearth faster. I know a vehicle would make much more heat, and the reduction zone is probably not big enough to support that flow rate.

The nozzle is probably 1.5 inches across, and around 14 inches from the grate. (I know I measured it once, but can’t remember).

The charcoal I’m using is completely dry. It doesn’t see water until the water drip down the intake. Maybe I should soak it? If I made it wet, could I eliminate the water drip? There is a lot of condensation on the puff lid after a run.

So far, the clinker is the biggest problem of the design. Everything else is good. I will probably add a cleanout door to the bottom, and a way to lower the grate to remove the clinker without having to empty the entire hopper.

Kristijan has had great results with moistened charcoal. However you do have to account for moisture in the gas so you’d need a coalescer like a hay filter before using something like a bag filter or foam filter that could clog/clump.

One of the issues seen with direct downwards tubes is the blast effect it has on the grate, I’m surprised it isn’t just spraying the clinker through it.

In the Svedlund charcoal gasifier they used a ceramic liner. This helped to crack moisture to make more Hydrogen and also any incomplete char that might make it’s way into your hopper. 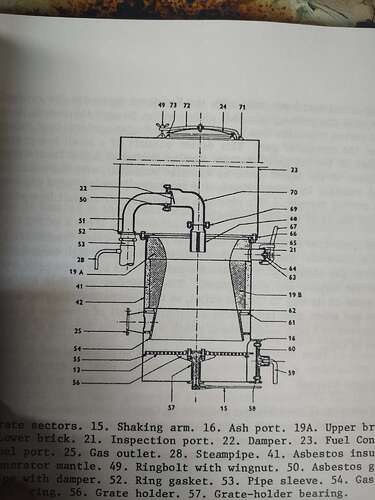 But obviously that has its own challenges of weight and potential fragility of refractory liners. I’ve mulled over the idea of using ceramic wool and hardening with sodium silicate and maybe satanite or an IR Reflective coating that someone else on the forum has shared. I’d have to look it back up.

Then there’s the Gragas, no insulation whatsoever so you had to use good charcoal, in the Gengas book there were complaints of it. 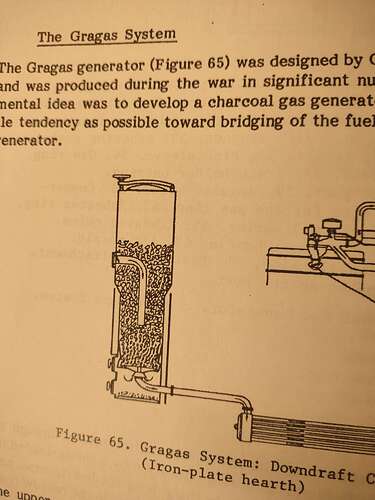 Edit: also these gasifiers used a much bigger fuel size. The Mako and it’s ring of nozzles used 20-40mm sized pieces. Much bigger than Gilmore spec.

It seems that they desired the gas to come out very hot, a sign that CO2 wasn’t forming.

That Gragas is interesting, almost exactly like my oil-cooled. It could be that all I need to do is eliminate cooling the tractor-rim hearth, and cool just the intake nozzle. It is the intake nozzle in my Gilmore-like designs that burn away anyhow. I can easily increase the reduction zone too, just by shortening the non-cooled part of the intake.

Fuel hoppers can easily be made taller.

Just be careful of the Gragas, it’s sensitive to tar and moisture so you would want to run dry charcoal.
The Svedlund used a nozzle to grate distance of 416-468mm.

When Mako started they made Gragas clones and tried shortening the nozzle to grate distance and it blasted a big hole in the grate. They were using a distance of only 250mm probably for a 2 liter engine I’d suspect.

As far as updrafts go, the Flute nozzle worked great in my Mazda.

Going with the nozzle directly from the bottom seems to keep the heat away.

I am working with large clinker build up also at the moment on my downdraft and the are caused by over heating , in my case i am using too small of a diameter on the nozzle tip i think, and so i shall increase my nozzle size up to what i normally run my 8KW generator on .

Your charcoal is excuse the pun is filthy dirty , you need to take more care to make cleaner charcoal , make sure your not getting soil/dirt and try harder to get rid of those nails they will help stop the clinkers forming i think , my clinkers are made when i run my generator doing work that means its pulling as much as it can from the gasifier , i did not run my gasifier as a flare at all really , once i made gas i put it to the engine .

Great build by the way and thinking out side of the box will bring many challenges that i am sure you will work through .

All the best Dave

One other design I’ve considered is to make a totally grateless charcoal gasifier, with a large dump hatch at the base for weekly/monthly cleanings. Gas would be extracted like a classic Imbert from around the entire reduction bell shaped area, slightly above to let the heaviest settle out.

The charcoal is nice and clean. The trommel that I process it with lets everything drop that can go through a 1/4" mesh. Yes, the nails I think are a big contributor to the clinker. Maybe I should go into iron smelting…

Flaring gives a chance to see what’s coming out with the gas. Sparks? Steam? Nothing?

The Lumina’s giant Gilmore barrel was just that – grateless. It’s only issues were 1. The barrel rusting out too fast 2. no way to get the giant clinker out. 3. more heat than the firebrick intake could handle, even with EGR (I never attempted water drip, should have!).

Nozzle design would be a blank check, I think a ring of nozzles would be ideal, maybe a 1" layer of ceramic wool surface hardened for the hearth, or just use heavy gauge tube.

This would be a maintenance heavy, but quick to build downdraft. A cyclone or drop box would be a must. 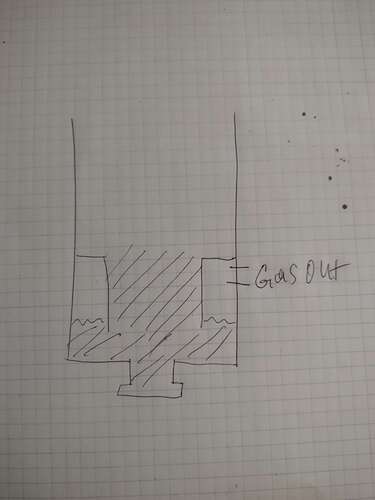 The Svedlund had a setup sort of like this, but with a sifting grate. Gas was extracted this way though.

Also when I meant grateless I meant downdraft. Water drip definitely would have helped but I don’t think you made your gasifier after Kristijan showed his Flute Nozzle updraft. Thick steel tube with holes drilled, pointing upwards. It formed volcanoes of slag but because of the air constantly rushing through it didn’t plug easily. On mine I had one or two nails forge welded to the nozzle but they came off easily. I didn’t like having to shovel out the charcoal to clean it though.

That clean out I drew could also come from the side, if it was mounted to a Bed of a truck or stationary. Ammo box with a ceramic wool insulation to keep the lid seal from melting, or a large diameter pipe nipple with a cap.

Unless we can source larger silicon carbide nozzles, you’d either have to liquid cool them or make them out of thick steel and be replaceable. All of the WW2 charcoal gasifiers used Kanthal nozzle tips.

Got the generator running! 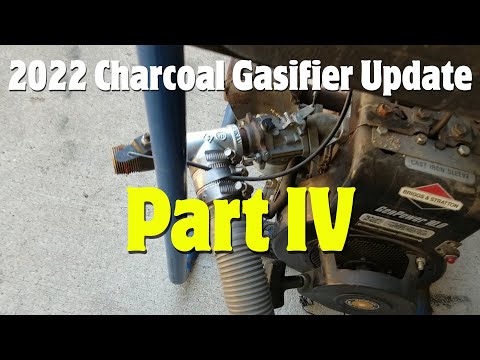