We just bought 50 acres in extremely rural West Virginia last April. 40 acres of mountainous woods, 10 acres grass, big flowing creek, and a 101 year old worn out tiny farmhouse. Small coal fireplaces in the living room and adjacent master bedroom. Oil lamps. Working hand pump well on back porch. Outhouse with a hand-carved seat. Two miles to our nearest neighbor and any paved roads. No snow removal, no mail delivery, and no cell phone reception in any direction for 15 miles. Had to photograph the power meter and give the power company the GPS coordinates to get them to come out here and turn on the grid power. Found a covered wagon, snow sled, scythes and 3 foot long manual wood saws in the old barn. Lotsa black walnuts trees for survival protein and oaks for wood. Ancient corn crib full of junk. Outhouse with a hand-carved seat (the house has been updated to include an electric well for water in the house, and a bathroom with a 1930s tub.) At one time this was a functional small farm with milking stanchions in the barn for 5 cows. The scythes from the barn were apparently used here for cutting winter hay before tractors were common. We bought it because we believe that hard times may be coming and we wanted to be self sufficient. Paid $138,500 for it. The taxes are only $542/year. Lotsa bullfrogs, crayfish, minnows, small bass, wild turkeys, and deer. Can shoot rifles from my back porch. We are 66 and 70 years old. Wife is worried that we’ll be lonely out here. I’ll try posting pix in the next post since I’m not real sure about how to do that. 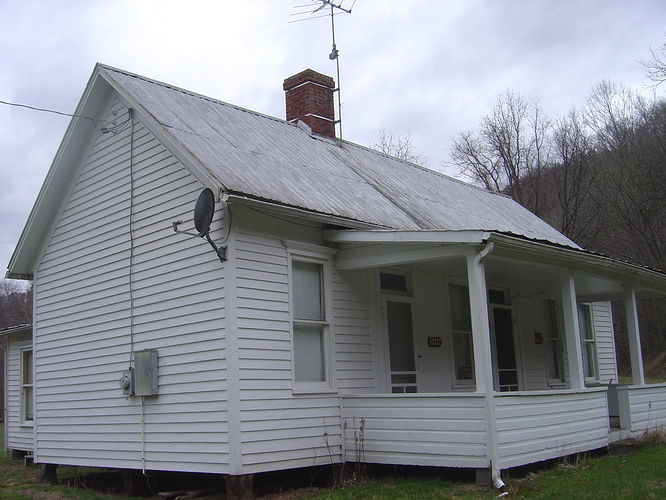 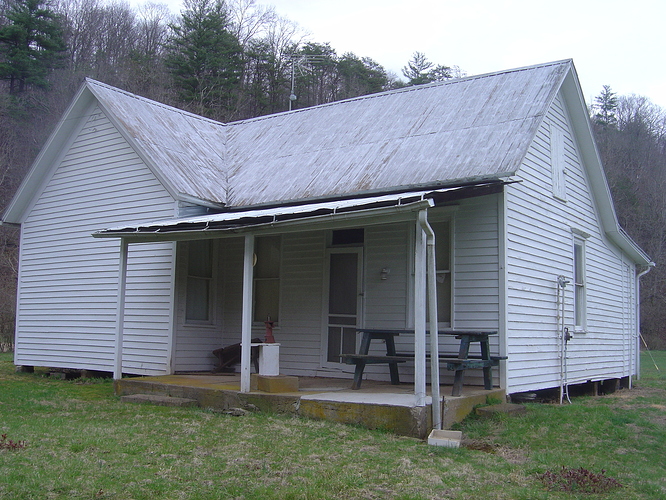 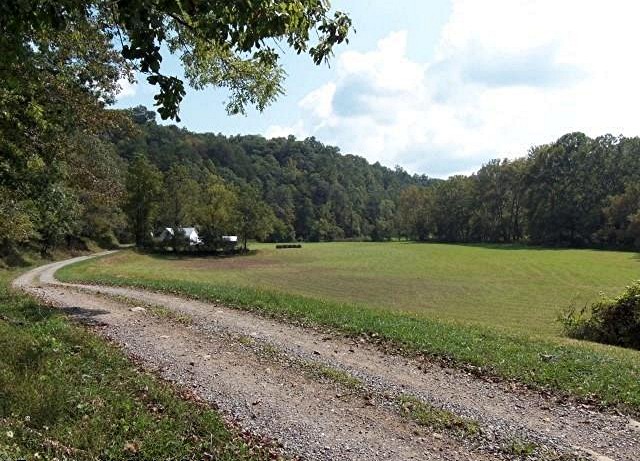 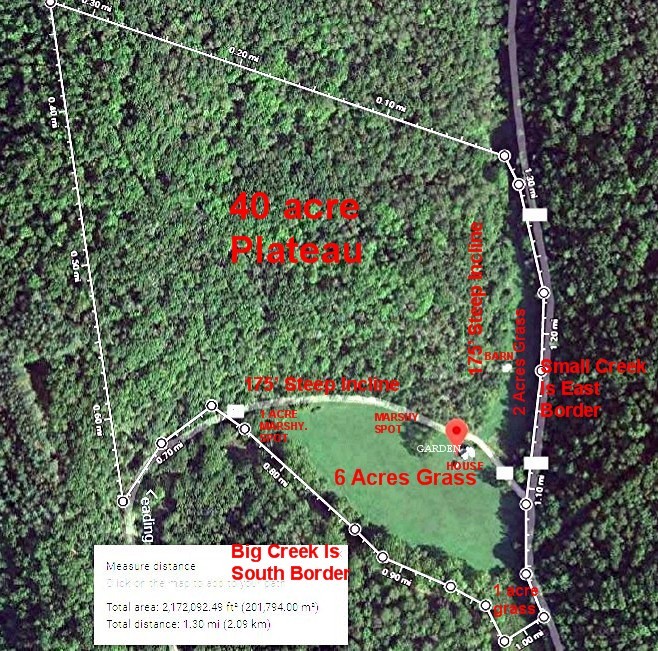 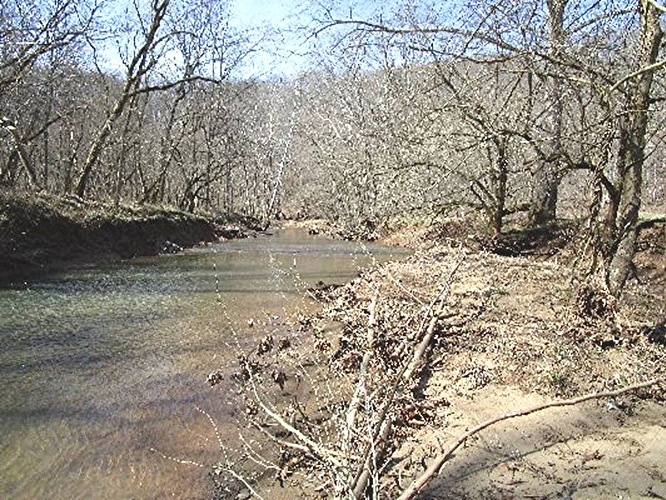 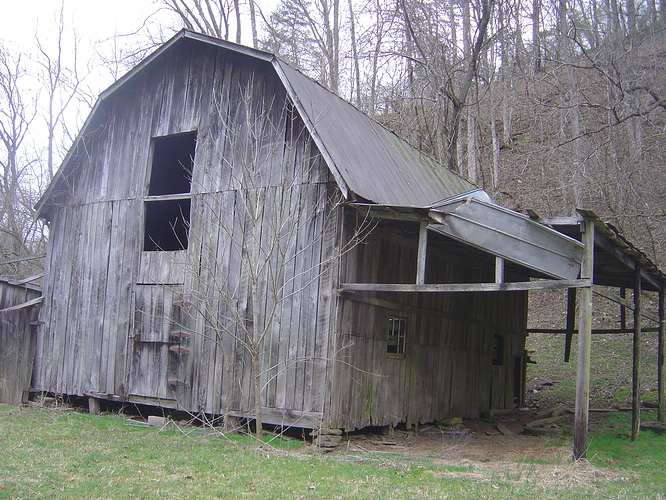 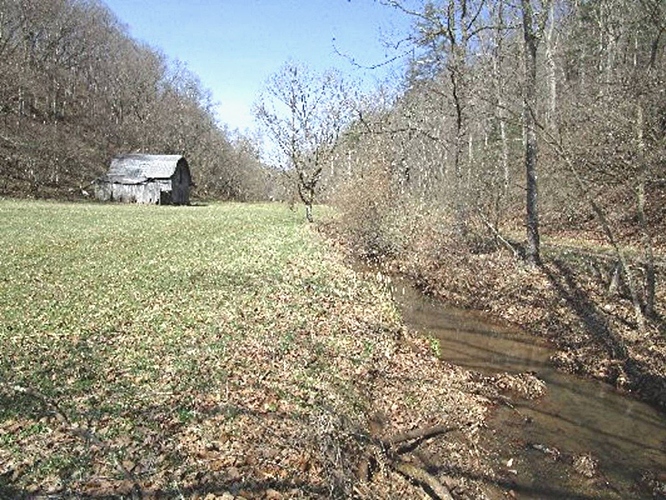 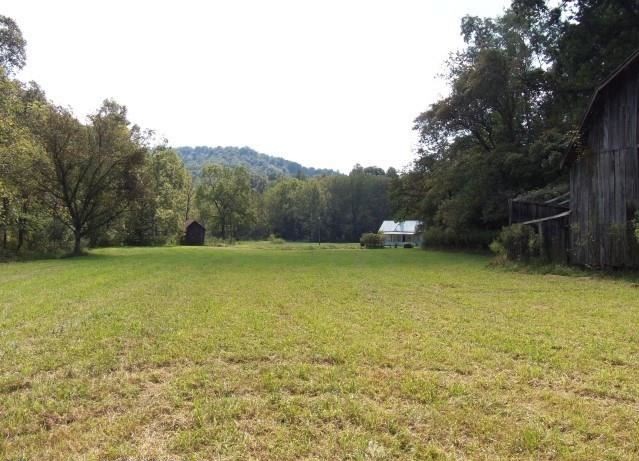 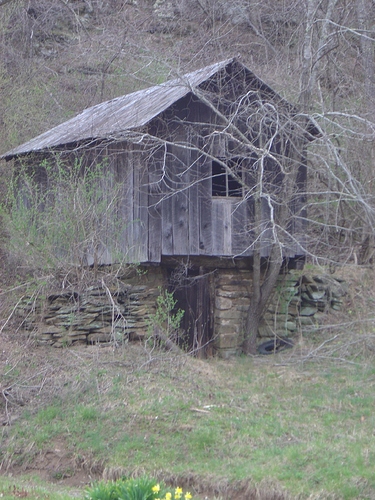 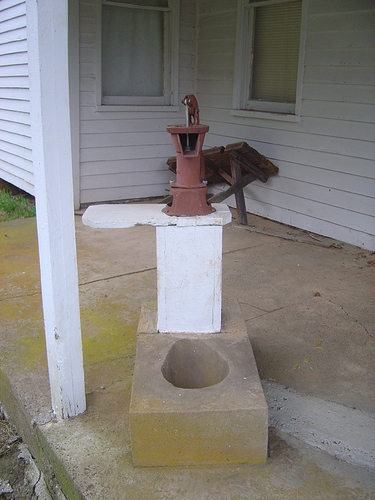 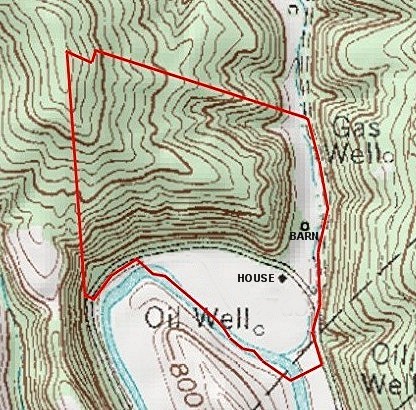 There is a large wooded plateau at the center of the woods (you can tell on the topo map). The edges of the woods are steep, with 40 degree slopes going up around 175 feet before leveling off at the top. Big oaks, black walnuts, and multiple typles of trees that have been threre forever. A 80 year old local farmer knew the family all of his life and told me all about the place. There is an oil/gas well on the property that I have gas rights to. However, in the 1990s the pressure dropped below the level that could power the ancient space heaters within, so is virtually useless today. We had to put a small heat pump in the front living room window to get the house insured. So now we need a wood stove in the living room. There is an existing small shallow coal fireplace there that we will use the chimney for. The local farmer cuts my fields for his cows’ hay. He got fortytwo 500Lb bales last June (said it was a bad year). So the grass is making at least 10 tons/cutting. We want to raise six St. Croix hairless sheep and a half dozen chickens. Looking at buying a tractor to move wood and cut hay myself. There is a 1/4 acre flat plot next to the house that was originally used for the vegetable garden. Substantial root cellar (see photo) for the root crops. Need to make a solar dehydrator, plant fruit trees and make it a farm once again. At the moment we also own another house in Pennsylvania and are living there over the winter to sell it in April and permanently move to WV.

Well, you have no shortage of wood, that is for sure. Nice that you have an electrical connection to the grid, but were you thinking of going off-grid eventually or just running a generator as a backup? There are a lot of interesting projects that people have done on this forum, so plenty of good reading to do. I made a little charcoal generator, and that is a super easy way to start making power from wood. Its not as efficient, but its very simple. I am looking forward to seeing what you do with the place!

Im wondering if we should start a thread for comparing energy requirements going into the processes and energy we get out.

Time to call on the expertise of @k_vanlooken …

We are not too far apart, I live about 15 miles northwest of Fairmont.

It looks to be a very nice place you bought, nice house, fields, water and forest.
It will be very fun to follow your work there.

That sure is my type of beautiful Mark. Congrats on your purchase…

Matt That would be a good topic because that is a question that forever pops into my mind… I read about the sensors, shakers, condensate tanks, cooling, filters, tars, etc and scratch my head. More power to all of you who make it seem so easy but I just start and go, then stop until the next time. I don’t drive on charcoal or use it as primary power supply just the tractor and some generator time so my needs are low. Since I heat with wood its just a happy byproduct. Permaculture people call it stacking when you get many benefits from one input… I do think about a primary gasifier unit using raw wood for steady battery charging but that will be a post kid project it seems…
Cheers, David

That’s some beautiful land you have!

Which you good luck on you new self sufficient life!

Beautifull. Looks like The Good Life from Helen and Scott Nearing. Good luck and pleasure with this adventure.

Northwest West Virginia has some really low land prices. You can get land for $1000/acre if you buy at least 30 acres. And there are lotsa places with ancient houses on them with good metal roofs that kept the place dry for 100 years. Many of those houses only add $20,000 or so to the land price. With a little fixing up on them it’s the cheapest possible way to buy a farm. We only paid $138,500 for a livable house on 50 acres. I can’t believe more people aren’t doing this. The taxes there are very low. We only paid $542 last year there. The taxes on my Pennsylvania house on 2/3 of one acre are $3600/year. That’s like paying $300/month rent on a place less than an acre! So we decided to move to WV and try the self sufficient life.

Wow thats really high taxes. We have Property tax here too but I think it’s weid to pay tax on something one alredy owns.

Atleast the income tax is not as high as here in Sweden where it’s around 32% + the sale tax of 25%.

We have Property tax here too

Thanks for the correction, there are so many taxes so it’s hard to keep track of them all.

Nice land you got there, Nice prices if you get enough land too not be stuck on a mountain side. Winter probly better than michigan ? Should be lots of bears around them mountains if you run out of coats. ?

It is a nice place! Congrats! I would be worried about internet access but one of my friends just got some sort of satellite internet in a more remote part of Ohio. It might not be that hard.

I would start setting up to go offgrid because they can have some reliability issues being that far out. I would look at solar because it is easy, and wind because it probably gets windy. I would also be a bit careful with the place because of the presence of coal in the house, which would also have coal dust in it. I wouldn’t want to breathe it.

I would get the soil tested if you are thinking about farming it then you know what you have and what you can do with it. The other check would be for the presence of heavy metals which can impede crop production, but I think that usually comes from places with mining tailings.

I still think it looks like a great place!