Hello Giorgio, and in Italy a Bucher mower with a Honda engine, but this is not a sin, in Slovenia we do not recognize any other than BCS.

In the background I see a “stuk”, so we say a pile of hay pressed around a tree (birch), interestingly, this is very rare to see.
have a nice day

this is the second gasifier we built last year- on a gutbrod license mower with honda 8 hp engine. the mower has had a two stroke engine before, what we changed to a 4 stroke engine to avoid oil dripping lubrification on a two stroke when gas is used …
the first gasifier was very successfull, built in iron and for corrossion-reasons with strong material and becomes of course heavy in this way…
for the mower would be too heavy, so we decided to build in stailess steel and using thinner material, so the gasifier without blower has the weight around 25 kilo…
for working the blower can be taken away. with one filling with charcoal runs more than 4 hours. it is no need to shake during operation- perhaps we used in the reducton area a perforated container with 3 mm holes, so the gas can escape also throug the wall of the reduction chamber, and also for reason of vibrations and not so flat ground where it drives… till now works 35 hours in hay season…
the gasifier is placed nearly centric over the wheels for to have a good balance with this additional weight.
filtering is with a stainless steel mesh, the filter works also as cooler. the filter container is something like pepsi cola pression barrel .
for starting we have a ball valve near the original carburettor, so when starting the right mixed gas is immediately near the motor…when the motor runs this secondary air valve is slowly closen while the other secondary air valve over the green rubber hose is opened.
when operating the secondary air helps to cool the green rubber hose because there is only half volume of warm gas inside …upper the valve is the secondary air filter

hello tone, the mower is originally from cechoslowakia and a gutbrod-german - license…
yes in the back is a haystack, when good made is a good system for store hay and straw!

You mention a reduction, is this a down draft charcoal gasifier? hello cody,yes i forgot to describe, it is a downdraft system… for motor using is better i think in case there is some not well charred coal -because of tar…further i have read here that is a difference between coal quality, in downdraft systems always comes fresh coal to oxidation area, in updraft system always the heat goes throug the coal in the hopper and changes the coal- is not more so good for motor using…
for this reason only my cooking gasifier is updraft system, good gas comes very quickly.
on the foto the nozzle what enters from the side and is about 20cm over the grate.
diameter of the reduction area is also about20cm. on the foto is good to see the little holes in the side of the reaction area.
the nozzle is in front made from a thick piece of stainless steel, for its thickness is more resistant to heat. when operating becomes red hot.
the grate is to shake , but not from outside. when finished work and the ash door is open for cleaning, also the grate can be shaked. IMG_90602592×1944 1.17 MB
this is a design of the air-gas mixer.
upon the secondary air intake is a ball valve for regulation. when regulated it needs no more adjustments between idle and full power…
the idea is from dutch johns site woodgas .nl micro gasifiers
6 Likes
giorgio (giorgio pastore) October 31, 2021, 10:19am #10 IMG_90512592×1944 1.39 MB
the startup hand blower, gear made from bicycle sprockets…the little wheel where the sprocket grips in must have the exaxt distance corresponding to the points of the sprocket-otherwise blocks easily.
the blower makes 1200 turns/minute
the wheels are ball beared
5 Likes
giorgio (giorgio pastore) October 31, 2021, 10:29am #11 IMG_65482592×1944 1.05 MB
the flywheel…
a handblower is emergency -shure, when batteries get old…
also on little engines there are not always batteries…

Hi George, it seems to me that you have the blades tilted in the opposite direction, as is usual with centrifugal fans, look at your Hoover turbine.

yes tone, but it lays in opposite direction inside ,upside down, there is no axle, the part underneath is the cover, itis a foto made during building, and today i was to lazy to open it for a photo , but right, it can be confusing… or a test

for deep thinkers, what not only like to see a lot of fotos , but also reflect about it…
i have seen your heating installation , great work, respect !!

Hydrogen_Generator_Gas_V.1&amp;_2_Wishart_Car_Type_Producer484×535 32.7 KB
to your recommendment with water or steam injection: the design besides i like very much… when my future diesel conversion needs a water cooled nozzle i will try like this…Admission d'air par tuyères
or the french model…
do you know - i have read somewhere- that aluminium parts in the engine can corrode with steam or drop injection? for acid reasons, especially if the engine not runs every day?
4 Likes
giorgio (giorgio pastore) October 31, 2021, 1:10pm #14

IMG_77531944×2592 1.12 MB
the red bear gasifier “lends” gas to the off grid 3kw generator…only connected with a longer hose , and no vibrations of the engine to the gasifier…
a tip for starting: regulation of the startup -secondary air ball valve ( is mounted instead of air filter on the engines carburator) . when starting operation i keep this valve open till cames good gas- flaring the gas-, then i close to one third to near half open when cranking the engine. once found the ideal open-split of the valve for starting, i use a alluminium stick with the diameter of the open split . with this stick i find at the next start immediately the right valve position -air mix- for starting. when the motor turns well i give a bit more air, so the suction bilds up his needed glow in the gasifier…when in balance, i switch to the secondary air mix valve with air filter, what is mounted on the gasifiers filter. doing so: while with one hand i close the valve on the engine more and more, i open in the same time the other secondary air valve on the gasifier…
why this procedure? in this way i have immediately good mixed air-gas near the engines manifold , what is not so in the longer rubber hose, so easier starting .
why not give the secondary air -combined with air filter- also during operation to the motor with this startup valve?
because a additional air filter at the end of the valve makes more vibrations on the engines carburator with eventually damaging after a while.
the second reason is: with the operating secondary air valve on the gasifier is also cooled the rubber hose by the additional atmosferic air that goes mixed in the gas and prevents for overheating the hose…
on the honda engine here on the foto is nothing modified, the original carburettor is for regulate the gas quantity( on the electric generator though the quantity is fixed , on the mower of course not)
the only thing i took away is the upper part of the original air filter substituted by an self made T piece in polyethylene - easy to glue together with the soldering tools- here i use 60watt…
7 Likes
Tone (Tone Šuštarič) October 31, 2021, 5:35pm #15

George, the engine is not harmed by water vapor, as combustion also results in the formation of water vapor, except that the proportion of sulfur in the fuel forms harmful substances, otherwise Kristjan would have known more about it. Good sketch of the gasifier …

I’m liking those water cooled nozzles, especially the ones in the French link. The one in the wishart drawing seems like it is too low and would get obstructed with ash before long. hello friends and experts…a thing what for me is not clear…here on the forum are some discussions about automatic air gas mixers, their problems and their solutions …
i have tried only on maximal 250ccm engine the simple mixer , shown in an upper part on a drawing, this is only to regulate when the filter becomes more closen, otherwise works well at idling and different power.
the same argument i have read somewhere on a post of wayne keith, he only must regulate when filter becomes more closen, and he uses a big engine-cars.
what is the difference??
i have the mixer immediately after the filter, and than is a more or less longer hose to the engine. where wayne keith has its mixer positioned, i dont know…
maybee it is a question of flow resistance?
cars have the air filter near to the engine, so the right mixture in idle is not the right on more speed, because of less resistance way, comes more air in the mixture when comes more suction from the engine?
who can clear up the fog?
thanks giorgio 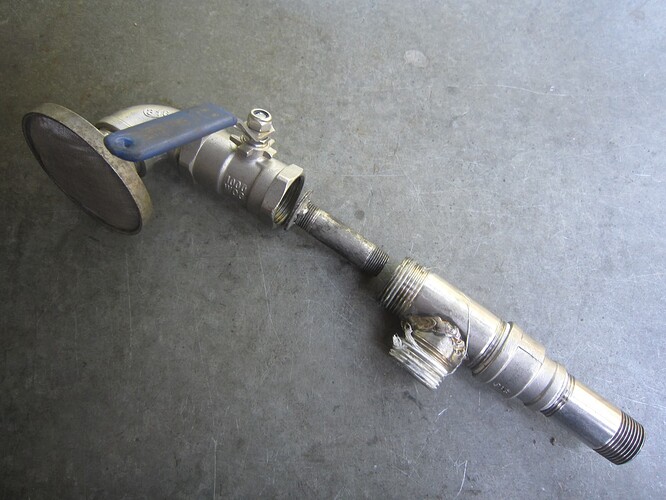 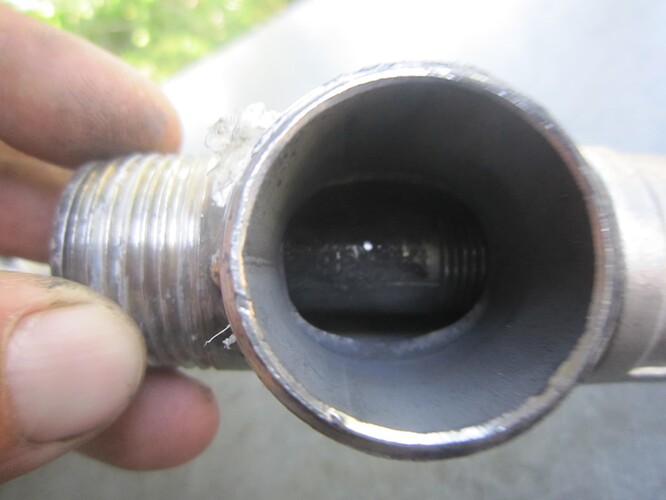 Giorgio, I think most of us don’t bother with auto-mix since woodgas burns ok in such a wide range, it doesn’t justify the complexity. @KristijanL and @Bobmac are probably the most experienced in auto-mixing and could chime in on its pros and cons.
Personally I find myself not adjusting the mix much at all. A cold gasifier, a long idle or a tight charbed may require a slightly richer setting. Other than that very little adjustment is needed. In my experience filter restriction is minor.
I agree though, the mixing-valve should be positioned as close to the engine as possible for fast responce. Especially if you’re cranking up straight on woodgas.
Don’t know if this was helpful at all. You seem to be well on your way as is

I agree Tone, this is where Kristijan insulated hot hopper worked. With the addition of the cooling tubes on the outside of the hopper and condensation tank to drain off the water. The insulation around the lower part of the gasifer like JO is doing and a larger drop out area. Preheating the air into the nozzles. Minimizing the heat loses out of the gasifer and putting the heat to work with pyrolysisation of wood in the hopper is a big plus. This is my goal on the WK build I’m building now.…