Here is a new design that I am working on. Trying to make it a no weld up unit.
Bob

Im using the finned jet reactors on the next gen charcoal units. A bit revised but the same basic concept. Just better build design and more specific for charcoal.

Hi Bruce, I move this to the a new topic thread.
In any good down draft gasifer needs a restriction zone where the gases and air speeds up. This is where the real transformation takes place the oxygen is stripped away from the CO2 and H2O, making them CO and H2, it continues down into the reduction to the grate. It needs to be completed before it leaves the charcoal. If not then the good gas starts to burn up. This what we call over pulling on the gasifer or going into a heater mode. Not good, you are now burning up the good gas you have just made.
After looking at my drawing I think there needs to be more space and distance to the grate pipe. I will make a revision to my drawing.
Above the nozzles flutes have 2 plates above them. This closes up the area to help keep the heat from moving upwards into the hopper and also helps the charcoal to move down to the nozzles more smoothly the pieces should be made out of stainless steel.
Here is the new drawing 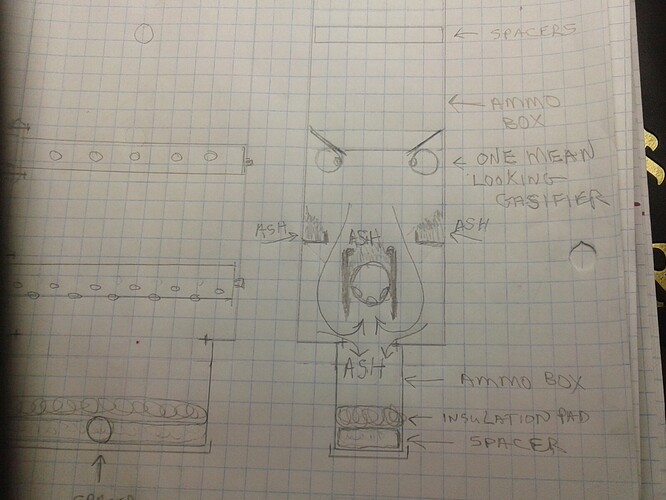 With the grate pipe it needed protection on top and the out sides of the restriction zone too.
I also made the reduction zone longer so the ash could settle and move to the ash drop area below.
Now the finish product of gas will move upwards and into the grate pipe and out to the cooling rails and filter.
Bob

I liked your finned jet design with the adjustable washes in between the fins for changing air velocity. I tried to make some but it didn’t turn out very well. I need your kind over equipment for cutting out parts.
Are you still making them round?
Bob

Yeah but they are no longer spaced. The jet rings are plates that when it is all sandwiched together the jet plates create a chamber that feeds the air into the reactor bowls. The reactor bowls have an air manifold chamber that feeds in air into the jet ring. Hard to explain really. Ill have to take some pics on a unit I am building. It is sort of a pre development unit. It was originally going to be part of the product line but I am pulling back on development for a while. We have big government job coming for Puru so getting ready for that to come in.

I hope and pray you make 500k this year.
Bob

Yeah I already have $40 k in projected sales just for January. So that would get me close if this were to continue.

Bob, great to see interest in downdraft charcoal gasification! I realy do feel its the next step for us all.

Just one correction thugh. The buty of a charcoal gasifier is that it doesent need a restriction. A restriction is important in a wood gasifier mainly to concentrste the heat and turbolence in order to crack tar. But with charcoal, we rely on the intense heat from the burn it self to do the job for us.

Wich brings us to Bruces idea. Couple of problems. As Bob correctly obsurved, with a cross draft (wich Bruces idea kinda is) you never realy get a horisontal glow zone but it rather extends up as a updraft. Better, but still not perfect. Plus as load decreases steam and tar vapours can be sucked from upper layrs around the glow zone and trugh the gas outlet pipe wich defeats the purpose.

What we need is a plane of superhot charcoal with no possibility of any steam escaping around the “hell zone”. This way we fully utilise the ability to burn less quality charcoal cleanly and we can add and meter water to the reaction precisely by adding our dry charcoal fuel a certain amount of water wich gets released as neaded automaticly. Exactly like wood does in a wood gasifier, only cleaner, faster and safer, more controled.
The lack of restriction neaded gets rid of some of the drag, meaning we make better quality gas and more of it for the engine to feed on. Thats a recepie fore some well fed engine horses

This is why l proposed 2 opposing flute pipe nozzles. I will make a skech later but l realy like Bobs plan to make this weldless! I am sure it can be done! 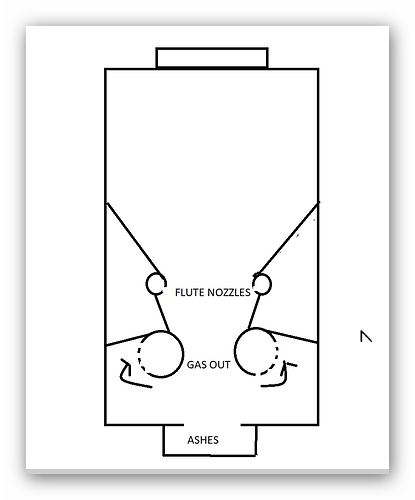 Hi Don,
Seasons blessings. I see why we need the sloped walls above the nozzles to block any hopper steam "escaping around the ‘hell zone.’ But Bob’s single central gas outlet with ash catcher/deflector plates seems simpler? Too hot? What am I missing?

My thinking was better flows and less restriction.

My concept is similar to this. I do have a restriction; however, this is for heat generation for the steam reformer.

The core shape is also reduced / tapered as your fuel will also reduce as it is consumed and converted to gas. Otherwise you may have bypassing gas flows around the oxidation process. So fuel enters at its full size, but as it is oxidized it reduces in volume as it flows through the reaction process. , I think you want geometry that is linear to the reduction of the fuels as they process. My goal is not to make chargas, it is to crack water with as little charcoal as possible.

If you want a heavy duty hearth, these are what I use. They work great for this and are cast SS and you can get heavier wall. Some are more expensive than others. Supply and demand? I dont know, I just try and use what makes sense and fits my application.

I like it Don, with 2 pipes the chances of ash get into the gas out lines is less because of the slower gas flow velocity.
I am sure I can make the charcoal guild panels on my break. I could drill the pipes and bolt them to pipes. Still no welding required. You could fill in behind the panels with insulation. Nice.
Bob

Hi Kristijan, I was thinking that a restriction was needed because of the wood that will be mixed in it. This would give it the moisture it needs to work with the charcoal. Might not have to mix any water with the charcoal. If you make some Lazy man charcoal it would not matter because it has the cracking ability built into the gasifer
Bob

Yup that is also part of why Im doing the restriction as well. As I want to be able to add in fillers to boost gas output.

For some reason the 6 inch to 5 inch SS reducer is MUCH cheaper. Could one of these reducers that are 5.5 inches long be used instead of flutes with maybe 7 nozzle holes, maybe 1/4 inch, maybe 2 inches down?

Hi Bruce, If you have a up draft gasifer the heat problems raises up to top and exits out with the gas. If you have a cross flow the gases are trying to exit out the bottom or side. The heat is radiant going in all directions. So if the area where the charcoal enters above the nozzles is small less radiant heat works its way upwards. Black Charcoal also is great for absorbing heat and moisture. On Don’s drawing I will make it a bit more narrow. I like the angle of the nozzles slightly pointing downward. I think it still needs some ash protecting the lower gas out pipes. That white hot charcoal like to melt metals.
The plates between the upper a lower flute nozzles and gas out pipes just remove them and put a restriction plate in with ash on top.
This design is different from anything I have seen used to this date. It is really simple.
Bob

OK, can we agree on some basic dimensions to build a prototype?

Number and size of outlet holes

Good idea if we had an engine displacement size to start with so we could go up or down from there.