A thread for motorized bicycles

This thread is for people curious about my motorized bicycle I brought to Argos. I have nothing to post so I figured I should make a thread about what some of you already seen at Argos. The bicycle I made it with is a hyper beach bike from Walmart for $100, and the engine I purchased off of a bicycle engine distributor in China. I bought it for $115 at the time, but prices have gone up about 10-20 dollars from a year or two ago. I will post the few pictures I have below, and post any questions you have. 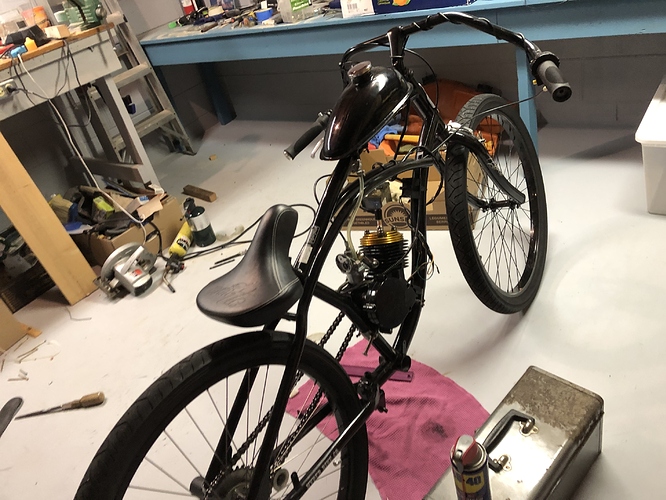 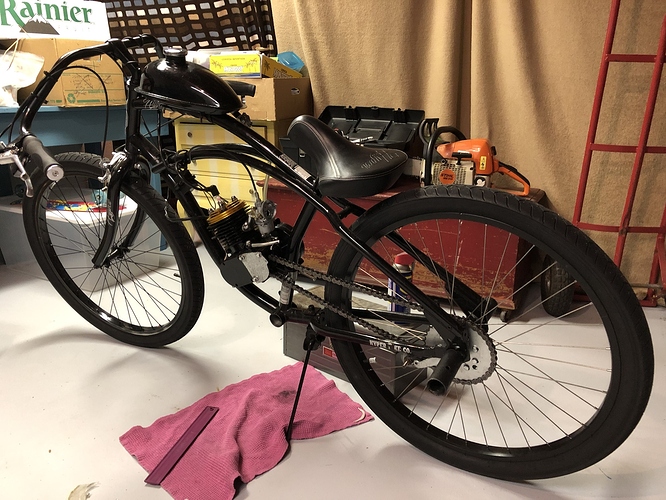 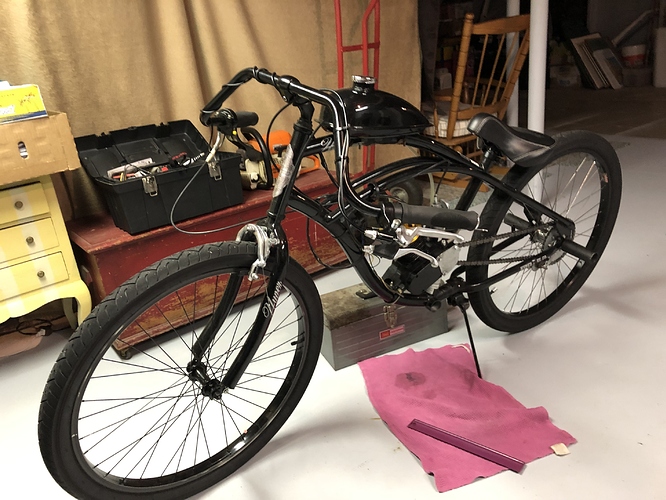 Before this bike, I had another bike I bought at fleetfarm, that is no longer available any place I know of. It was a very good quality bike, but in the engine kit, the stick chain tensioner was designed horribly. It relied on one tubular bar and friction to keep it online with the chain. The bar being tubular made it unstable, and the bottom part of the bracket was loosened from wear. I was on my way to the hardware store to get some new nuts and bolts for the tensioner, I made it no more than a quarter of a block, and the chain tensioner flew right into the rear wheel, ripping out two spokes. After that I realized, it was no more for that bike. I could not find a quality rear wheel, so I bought a new bike. Looking back on the frame itself during that incident, the whole thing warped from the pressure on one point. Anyway, I was dumb enough to think it wasn’t the tensioner’s position, but the loosened bolts. So I used the same tensioner on my new bike, and the same thing happened again. I had to buy another wheel, but I found a rear wheel for sale. Long story short I fiddled around with more tensioner locations, and I mounted one right to the frame. It is slowly bending out of shape so I need to find another location, but as of now it works. Here is the first bike I put the engine on. 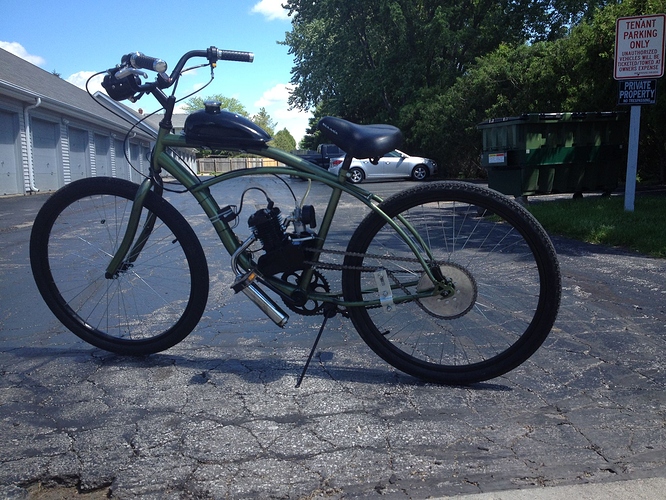 Hi Tyler, the engine on your bike is a two stroke? What is top speed on the bike? Some where there it might be on DOW site some did a Charcoalgasifer, but they were using a four stroke engine. The bike was reinforced in the frame.
Kristijan did a moped bike.
Bob

Yes, it is a 66cc two stroke motor, commonly labeled as 80cc but that is the Chinese measurement of the engine. I know that one guy on YouTube once made a 4 stroke engine kit run on wood gas made from a small bee smoker, which was not nearly big enough for a motor that size to idle. Top speed is probably somewhere between 33-38, but it really likes to vibrate and feel like it is falling apart at those speeds. It likes to go 28-33 easily, and I could be holding the throttle still at 25 and it “catches it’s breath” then accelerated fast up to 30. And the chain does not like those speeds with it being a little loose, the rattling is not so great. 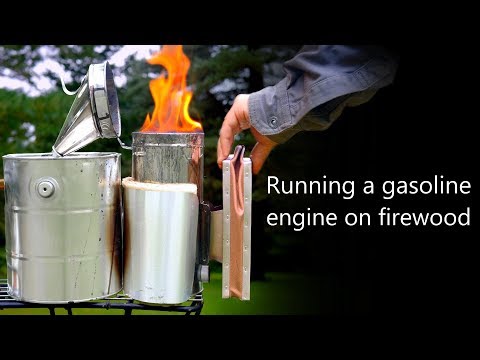 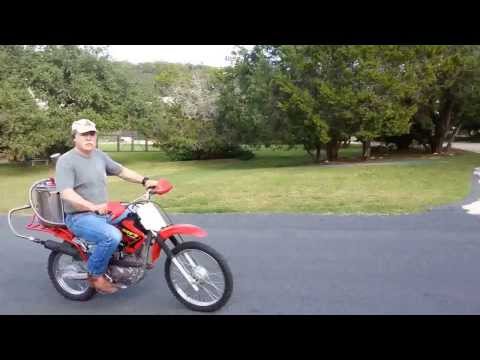 Hello Tyler; You and I talk for a while in Argos without being introduced. Did you come with the Norths and are you friends or do you live with them. I was the old man who talked to you about the Wizzard/Schwins with as I recall 20 " wheels. The were slick.j
In my day I road motor cycles all over the US. I was continually having to tighten the chain. As I recall the mc was like your old bike with a slot that the axle slid into. On a mc you had a bolt that would push or pull the axle towards the back which tightened the chain. If you start out with you chain “tight” you may not need the “tensioner” until the chain starts to stretch. At that point you can tighten the bolt again until the chain is tight. You will have to learn to break the chain and put a key link in it. This will be easy to do with your new bike if you have a similar slot for the axle to go into, because you don’t have the “peddle” chain restricting the movement of the wheel when you want to adjust the drive chain. TomC

I did not come with the norths, My dad and I drove to Argos from Wisconsin, I wish I could be more involved with some of their projects, but I am not really associated with them. As far as the bike, I like the idea of just getting a motorcycle instead of adapting a bicycle to get up to speeds at 35mph! The problem is that no bike is designed to handle that kind of stress from the engine or chain. I am 13, and I really don’t have much access to private roads or anything to ride a street bike legally. I thought of using the wheel as it’s own tensioner, but the chain links are not spaced where I could do that within a reasonable amount of wheel movement. Tyler

As far as the bike, I like the idea of just getting a motorcycle instead of adapting a bicycle to get up to speeds at 35mph!

35mph isn’t really that fast on a bicycle. The Tour De France guys will hit like 85 going downhill. 21-25 going uphill. The bike he has is sturdier, but I would be changing out the bearings.

The “real” trick to the motorized bicycle is in most places they are road legal and you don’t need to pay any license fees as long as they are under a certain HP.

You should check out some of the early early harley davidson’s.

The first models of Harley-Davidson.

Did you come with the Norths and are you friends or do you live with them.

Billy North son Luke was at the event , He is about the same age and size as Tyler and I saw him riding a bicycle often .

I have actually toured the official Harley Davidson museum probably 5 or 6 times because I live right near it by Milwaukee. Every time I’m just as exited as the last to tour it. If I had the money I could just buy another better built bike, but by replacing a bunch of stuff and making it sturdier, that would up the cost close to as much as buying a project motorcycle, I was also thinking that the Honda cb350, 450, 550, and 750 could all be made into cafe racers for pretty cheap, and I like cafe racers a lot. Here is a Honda cb350 cafe racer: 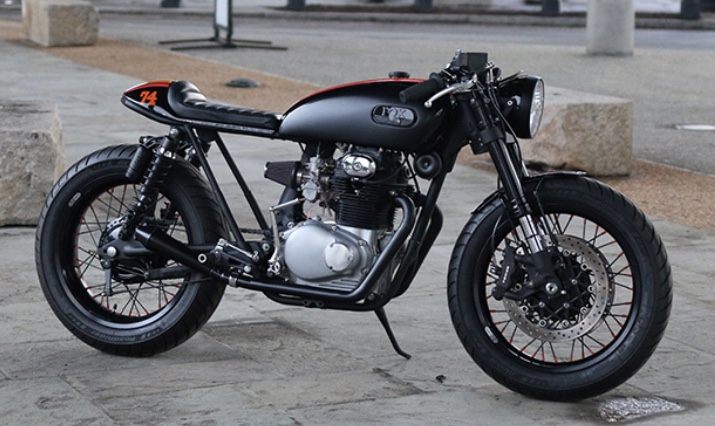 A friend of mine likes the Yamaha XS650 twin. they are popular because they can be made to resemble an old triumph. I think Kawasaki has some older twins as well.

Tyler; I don’t know if it is possible yet or not, but the wizzar/schwins used heavier duty spokes to make them more stable. You could probably respoke your wheels to make them more sturdy. As far as I know, it use to be you had to be able to maintain 35 mph to be on Wi. roads. However, up in my country, the Towns or Townships are allowing ATV’s and UTV’s on Town and some county roads, but they are LIMITED to 35 mph. About your chain. You can go to a bike shop and they have a tool that can “brake” the chain and take a section out so that it fits tight without a tensioner. Then set up you rear axle in a slot like the picture above. You pull the wheel back until the chain is taught and then move the other side of the wheel to get it centered. TomC
PS Get Kristijan into the subject here. I believe his first woodgas endeavor was a 2 stroke bike and he found a way of adding an oiler. TomC

I will look into respoking the wheels, and like you said, taking a link out of the chain might work, but I’ve tried that a little and surprisingly one link makes more than a half inch difference in slack. If I take one out then where the mounting of the rear wheel sits, it is basically falling off the edge of the mounting slot. @KristijanL I would like to know more about the two stroke on wood gas and the Oiler you made. Tyler

I really like the design of the simple fire dirt bike that I posted above, does anybody know more about that project? Thanks, Tyler.

The honda above looks a lot like the one built by a fellow who occasionally posts here. I cant think of his name though.
I,m not sure if they are available for bicycle chain or not, but for larger size roller chain you can buy half links. Wrth a look.

The chain is I think considered a small motorcycle chain or a heavy duty bicycle chain, but I know there is a half link available online somewhere. It is a 415 size chain. TG

I hear my name mentioned. Correct, l chargased a 49cc two stroke. And it worked wary well! Knowing what l know now regarding gasification, l could avoid many mistakes and make it a useable machine. If you ever decide to woodgas it l will be glad to help you.

The honda above looks a lot like the one built by a fellow who occasionally posts here. I cant think of his name though.

Tyler: Martin Payne here, creator of MP’s Motofier. Let me know how I can help you!
One late, important Lesson Learned: The bike ran so well at the Mother Earth News event, a few years ago, that I decided I would never put gasoline in it, again. (I had just cleaned gasoline gunk out of the tank, and replaced the filter valve, so I was disgusted with gasoline.) Anyway, I put the bike away, didn’t try to run it for a while. When I went to kick start it, it wouldn’t kick, engine was stuck. With a little more force I heard a “pop” and it came free! Real free. As in no compression.
So, the water-saturated wood gas from the charcoal gasifier had rusted the steel piston rings during the time it was sitting. One needs to run the engine on gasoline, or LP, or fog it, or flush it somehow, after running woodgas (if it will sit up for a while).
Holler if I can help!

I’ve had the same thing with a 13hp Honda. I sprayed some penetrating oil through the spark plug hole, let it sit and then loosened up the piston

Thanks, is there a “kit” or plans available for the style charcoal gasifier you put on it? I was also thinking of some bigger motorcycles with a side car that is dedicated to a charcoal gasifier (or possibly wood but less likely). Do you think this could be scaled up a little and used in that manner? What miles per pound or miles per gallon of charcoal do you get with this little bike? And what is the top speed? Thanks, Tyler.