Had this done for a while. What best why to judge size when chunking? Going to build a conveyor next. 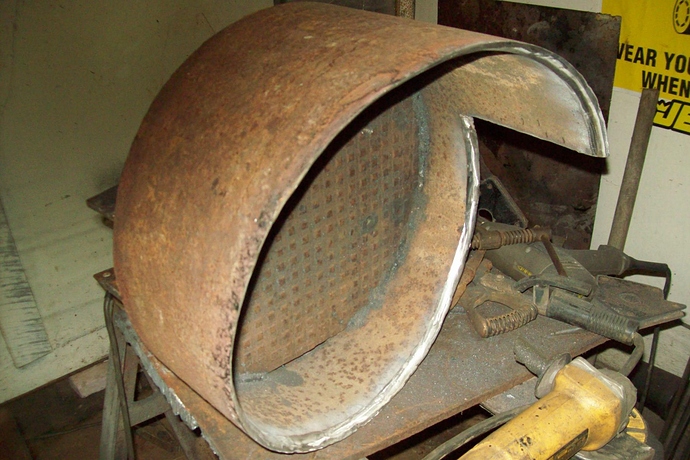 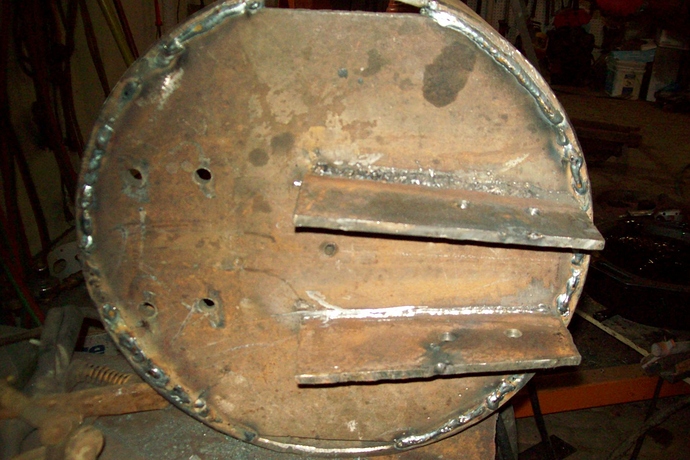 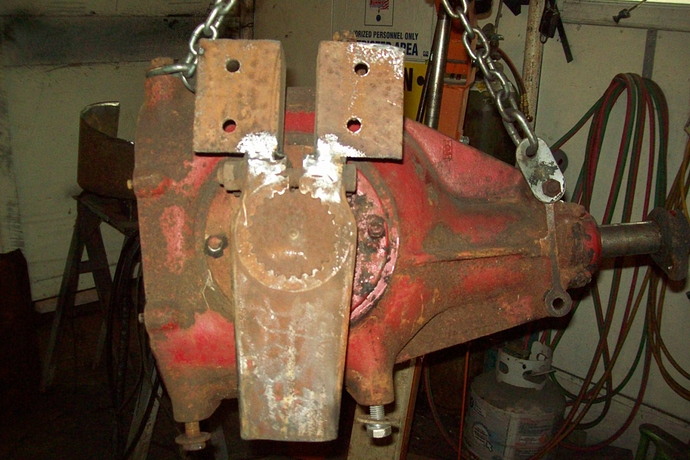 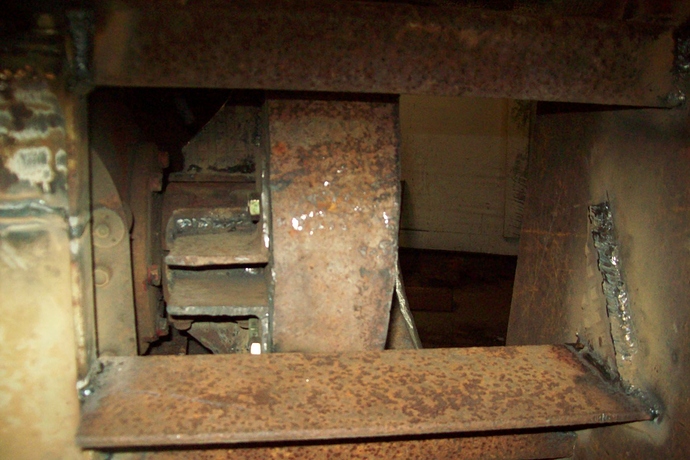 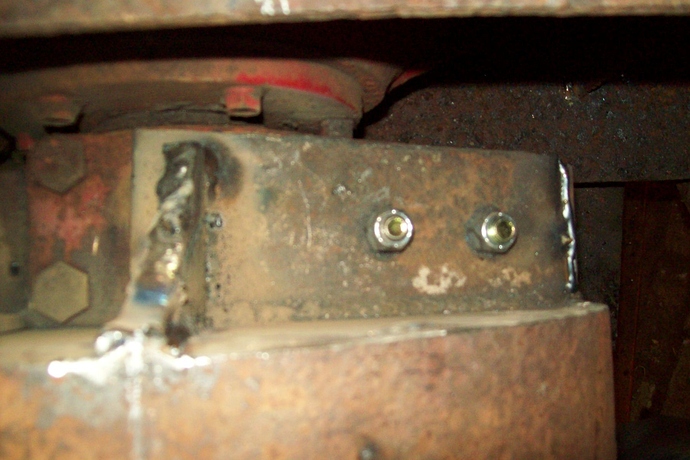 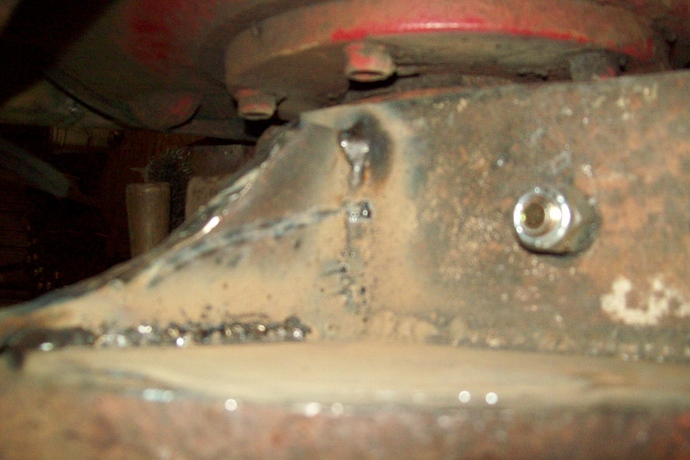 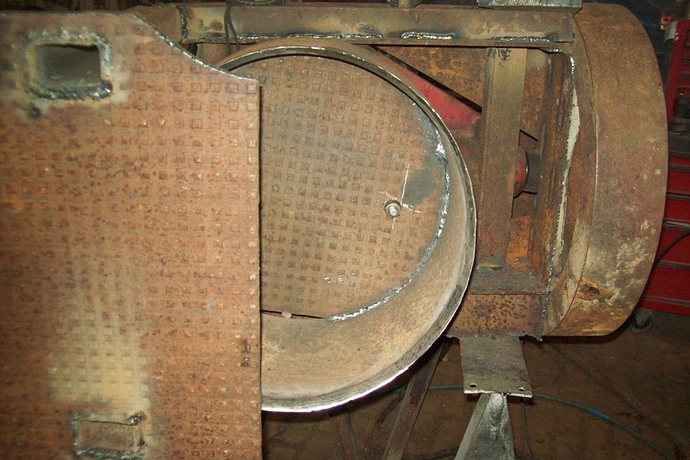 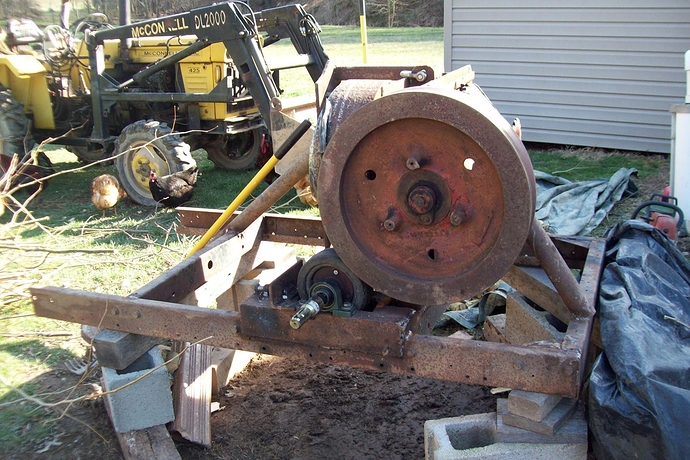 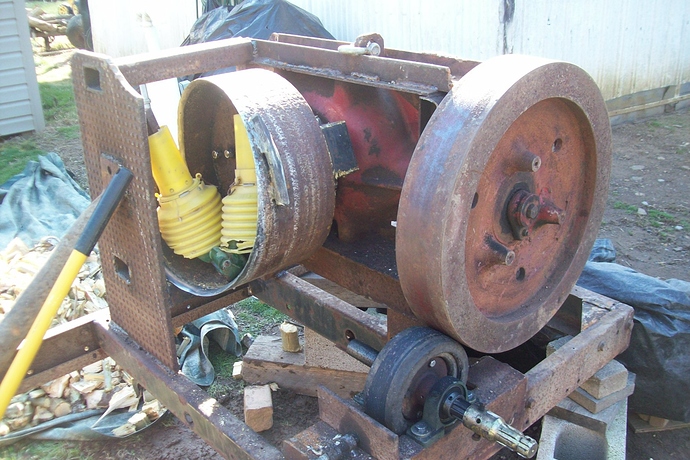 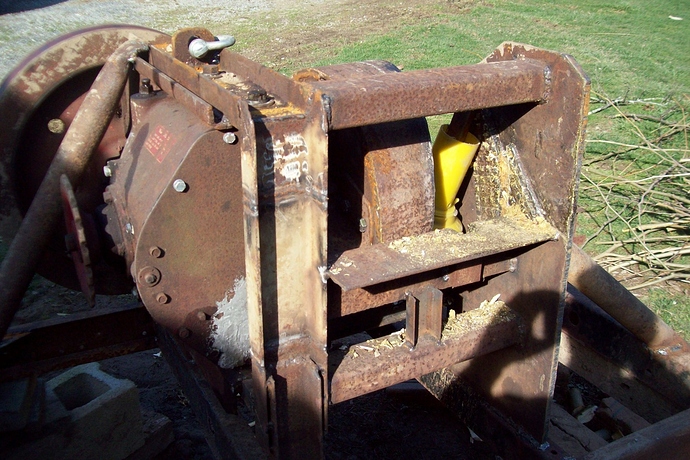 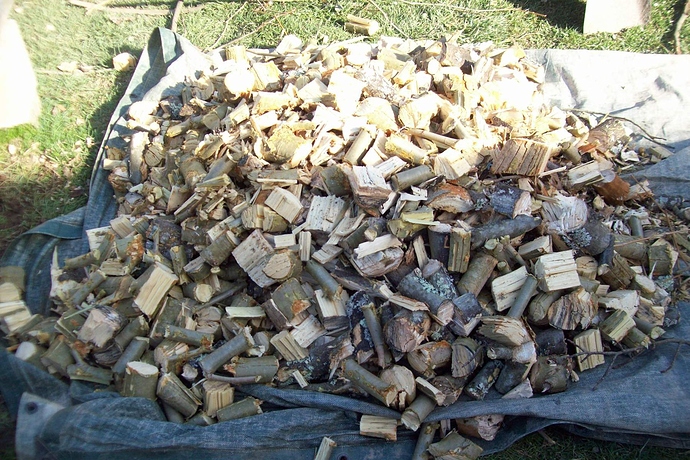 That is one serious chunker and drive mechanism. Nice.

Very nice Al!
Looks like it works well.
I was thinking of using the gear on the other side could be used to drive the conveyor.

Thanks Bill, Pepe, I used the long shaft on the drive wheel to put pulleys on to drive the conveyor, and to belt drive from an engine. I thought maybe I could use the sprocket to drive a self feed conveyor.

That is one serious chunker and drive mechanism. Nice.

Exactly what I was thinking.

I thought maybe I could use the sprocket to drive a self feed conveyor.

I was going to suggest the top down vertical feed thing for the stubs, but with an autofeed it probably isn’t necessary. You are already a step ahead.

I saw that plate in the middle of slicer and initially thought it was a manhole cover until I looked at the picture a little closer. lol

Hey Al, looks good. I got a baler a while back but it sits in the field. I’ll get to it one of these days. Our warm winter has made cutting firewood this year unnecessary and the chunk shed is full so I have not been greatly motivated. Finished a wood working shop a couple weeks ago and Working on a 48 x 70 junk shed right now. We milled all the lumber and posts. Anyway, …had a couple of questions about your chunker.

Hi Bill, It is PTO driven, I used a longer shaft than needed so I could put pulleys on the shaft to drive with a small engine, or elec. motor, yes it has an adjustment. I think the wheel, and solid tire is off of an old hay tedder. Al

Alot if the flywheels on balers have groves in them that are designed to take a v belt drive. It is a hold over from when tractors where under powered and there was a motor opetion for the baler. They still put it on NH balers because I think it is Amish farmers can’t use a tractor for religious reasons but they are allowed to pull a peice of equipment with horses and it is ok for the equipment to have a motor. I don’t understand the religious part but if you have a baler with a big flywheel that has groves on the outside you can use that to attach the motor to drive it. There is probably even a motor mount plate up there by it if you look around enough.

I like Al , it looks real strongly made. A good way to turn the flywheel.
Calvin…

Hi all, I’ve been chunkin, and chippin all the sawmill slabs, and branches from poplar trees. My question is will the bark burn ok in the gasifier? It is about a half inch thick, and on tight. I chunked about a 100 bags in 2 days. Trucks running good.

I have burned quite a lot of poplar. It works for gasifying but it takes more wood than say oak or hard woods. I have used it with bark on it but as I said the wood itself is not real good and the bark will make the chunk less productive. TomC

I remember asking this question a few years ago. From what I remember is bark has a lot of energy in it but you’ll get more soot. How I understand, if it is thinner bark it’ll be less of a problem.
We need pictures.

You can show off a little.

Energy in the bark alright.
Woodgasifier the biggest problem it introduses in much more mineral-ash.
How big of problem?
Depends on the actual mineral ash content of the bark.
That minerals melting/self-sticky (non-technical word for it) temperatures.
Just how excesive of reduction zone hot you are operating at.
The amount of passed trough steam you are allowing.
See? Couple of, three, more factors too. Grate type and activity of that grate. Grate level superficial velocity. Ash minerals interactions.

Practical advice?
If the bark is no more than, say, 15-20% of the fuel wood bulk you put in you will probably not have a problem.
100%, all bark burning is 100% problems to operate past…
Regards
tree-farmer Steve unruh

I peal my poplar like you said 3/4 in thick bark seems to never dry and it comes off easy.

`I’m with Paul on pealing poplar. I can’t speak for gasified chunks but larger round logs and firewood will rot before drying if not split or pealed.

How are you all peeling logs? I tried to peel a poplar log today, to me it is less time and energy to sharpen the band blade than to peel the bark. at lest for an old fart like me.

Are you dragging the logs on the ground and getting dirt into the bark?. Is that what is killing your blades? If so, maybe hitting them with a high pressure sprayer would clean them enough to save the blades. I get poplar slabs and they have a lot of bark on them. For the gasiier I would prefer not to have bark, but I use it anyway. If I let the slabs lay long enough before chunking, the bark will get loose enough that I can sometimes pull it of the slab pieces.TomC

Could you also use that pressure washer to de-bark?? Seems like that would work with some kinds of trees?

I like to soak them in a pond and use a spud. But tie a rope on them because they sink in time. I have to build a mini barge to hook onto the sinkers from years ago.

In 1946 I went fishing up in Canada, way back in the bush. The only people around were an Indian and his wife had a log cabin. One morning he took three canoes and crossed the lake. That after noon he came back with the three canoes full of short logs. I asked why he didn’t float the logs across the lake instead of loading them into the canoes. He said the logs would sink. Must have been Aspen he was cutting. TomC