Calvin, I’m glad it made it across the border. It is a used one but it is SS so should last many years.
You may be right with getting vee grooves cut but I will try everything I can to avoid that.
I can’t wait to see that truck burning wood or maybe Flax straw pellets? Keep us posted.

Any generator experts out there? I had power for about one second and then it quit and no power after that. The circuit breaker was not tripped and the rpms on the tractor were in operating range. 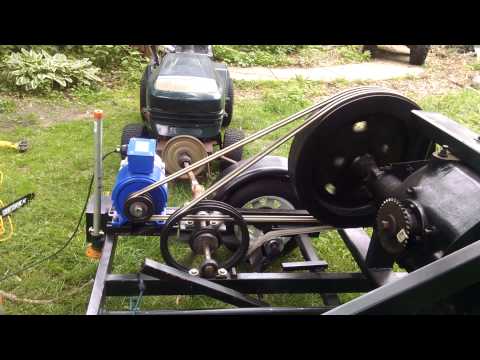 check and see if it has a automatic voltage regulator it should be the first thing that the brushes hook to.two wires go from the brush to the AVR.

When I was running a Northern Tool Powerhorse Inverter Generator (2000 watts surge, 1600 continuous) on a Simple-Fire charcoal gasifier, it would output a bit more than 800 watts, into lamps and heaters, as measured on a Kill-a-Watt meter. When I hooked it to my chop saw, a red overload light came on, and the inverter output dropped to zero. The only way to reset it was to stop the motor, and then the light would turn green. I learned to restart the motor when the rpm’s were very low, the red light would turn green, and the motor would rev back up, so I would not have to be yanking on the starter rope. It could be that your inverter generator will reset next time it starts up? Hope so. (I realize your unit does not have an overload light.) FWIW, Ray.

What’s your pulley ratio on the two smaller pulleys? RPM times pulley ratio will give you the genhead speed. If it’s around 2:1 then multiplying it out, you were running the generator up over 7,000 RPM and way overspeeding it.

EDIT: forgot to take into account your PTO pulley. You have two ratios to figure, the PTO speed then the genhead speed.

I moved a post to an existing topic: Chris’ Baler Chunker

Pretty much what chris said. The rpm in theory is 540rpm, and the max speed was 3000rpm for the generator, which means no more then 5.5:1 increase. by just looking at it, it looks like you are way over that. Hopefully just a fuse blew… Are you getting any lights on it?

I didn’t have much time to work on the generator tonight because I had dinner with all my adult children and my new grandson. When I returned home I had to try this again. I was and am certain now I’m not getting enough rpm’s to the generator. There are a series of led lights to indicate ideal to dangerous rpm’s. I was at the bottom of the scale which was hard to see in the daylight. This meant I didn’t even have enough to illuminate a 125 watt flood light. I verified this by having the light plugged in at start up when engaging the pulley. The light illuminated right away and then went out. This also told me a belt was slipping and I believe it is at on the pulley at the engine. I believe if I tighten the belt up, it will reduce the slipping and maintain speed. I also believe I need to still increase the speed of the generator by using a 4" pulley in replace of the current 4.5"

My PTO is spinning at 900 rpm or less. That turns a 12" pulley which is turning a 22" fly wheel. From the fly wheel I am going down to a 4.5" pulley on the generator. I was unsure of my math and that is why I went to a 4.5" pulley instead of a 4". I will see if I tighten the belt to the PTO from the engine if I get a steady amperage before I reduce the pulley size on the generator.
The belt was actually getting hot. Hot enough that the idler pulley were too hot to touch. So maybe a lot of slippage?

The cloth covered belts looked like they had a lot of slippage at Argos. Rubber v belts or even a serpentine belt would get a lot more traction on the flywheel. What speed is the pto shaft running at? I think I would try to run the generator directly from the pto shaft.

Thanks for the link for the laser tach Marvin. I did purchase it because I think it is necessary and reasonable enough.
I believe the PTO is spinning at around 900 rpm. My theory on using the flywheel is that it will absorb some of the initial drag when loading down the generator? I’m not sure if my thinking is right though.

however, according to:
http://www.wernerpower.com/application/2-en.html
3. Line fault protection: The Inverter will auto stop when load abnormal or short current.

I didn’t pay attention to what load you put on it.

I would try belt dressing if you haven’t put any on yet. or rosin or something.

I would think about wrapping the flywheel in neoprene or spray on adhesive/sticky stuff.

Also, I would put a lever under the genset and lift that up, when you first start it up to get the flywheel up to speed.then engage it by dropping it back down. I assume you are tensioning those belts with the weight of the genset. (if not the belts may have stretched a bit as they got hot, but I am sure you are aware of that.) Then you let it get back up to speed before applying any load.

Thanks so much Sean. I really appreciate your input. Hopefully I’ll have some time to try a couple of things tomorrow.

I would try it straight off the pto shaft. Sounds like you need to step it up about 3 to 1. The belts will transfer the flywheel power back through that shaft if you need it and they are not slipping.

Hi Bill, I didn’t read what rpm the gen head calls for(may have missed it) most are 3600 rpm, and this has to be constant for it to operate properly (60 cycle) this set up will be nice at your new property. Al

Al, it says 2200-2800 on the nameplate. It is actually a pretty neat genhead. It is an alternator, then they run it through a rectifier to DC and then through a full synewave inverter to get back to AC. It is great for variable speed loads like wind and water. Because you are rectifying to dc, it doesn’t matter what frequency the alternator actually has, and you don’t need a constant speed. Electrically it is similar to using an AC induction motor (with a tickler), rectifying the current to run DC into your solar inverter. It is also what an automotive alternator uses minus the conversion back to AC. AC generators are smaller packages, and AC actually has less resistance (ie you can use smaller wires to go longer distances) then DC. (pulsed High frequency DC is another story.)

Al, this is an inverter generator head. It’s supposed to have a pure sine wave. It gives a range to run in which is 22-2800 rpm not to exceed 3000.
@MarvinW , another intention with having the generator head on here is to just be able to chunk wood but if I needed electricity, I could easily just add two belts. I know I am wasting energy to the gear box but the tractor has more power than the gen head needs. To go directly to the gen head from the PTO I would have to remove the pillow block bearing and change belts. I was hoping to avoid that.

Al, you can zoom in on the nameplate, and plugs on the eBay listing.
http://www.ebay.com/itm/161446387546?_trksid=p2055119.m1438.l2649&ssPageName=STRK%3AMEBIDX%3AIT
There is also a big warning not to exceed 3000 rpm. My experience with inverter generators is that they don’t like large surge currents. Perhaps that electric chain saw is too much for it to handle. I know the one I have in the barn will not handle a 10 inch Miter saw which I use for cutting branches into little chunks.

Yes, that’s the one Ray. Am I thinking right that the 210 lb flywheel will help with the surge? The electric chainsaw here is a 12 amp saw and the generator is capable of 15amps. I figure it would be a good test if I can find the sweet spot.
I confirmed a suspicion of mine this morning. I thought the belt from the engine was slipping a little, so I tightened it up. Now I am able to keep the light on. I’m friggen happy about that. Now I am taking Sean’s suggestion and going to the store to pick up a smaller pulley for the gen head to get the rpm’s up a little more. I would like to sit on that 2800 rpm if I can. 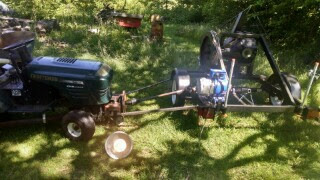 There is also a big warning not to exceed 3000 rpm.

Right. but " Inverter attached to rear of generator maintains 50 or 60 hz, as long as the rpm is enough to turn on the inverter! The current will vary depending on RPM"

To get to the full 15amps, you need to be at the very top of the range. If you have a load bigger then what it is producing it will cut out as he described.

Also I assume he check to make sure it is outputting at 60hz not 50hz.