You have made great progress on the charcoal gasifier. Very good presentation, the trikes look like fun.

Many small steps done, on a long way to go…
1 to 5 feb, presentation of the 3 projects (1:generating electric, 2:recycling plastic waste into energy with gasyfier/pyrolizing unit, 3:the trike)
in Bangkok energy awards, this by myself with the students

5 to 9 feb, presentation from the 3 projects by the students in the innovation awards. ( also Bangkok )

many things to prepare…

and a lot of fun driving around with the bike , making heads turn… 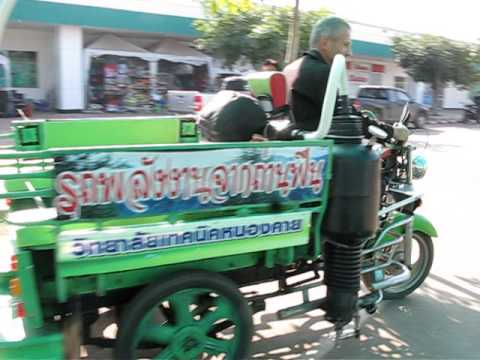 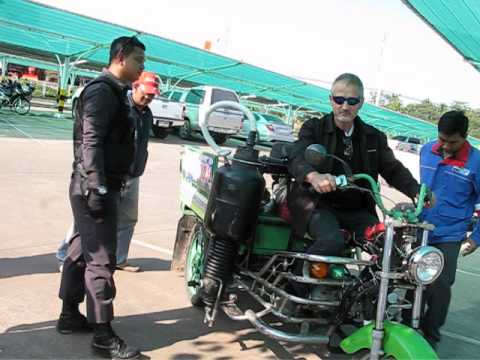 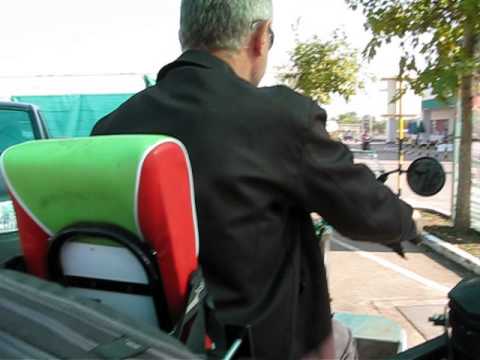 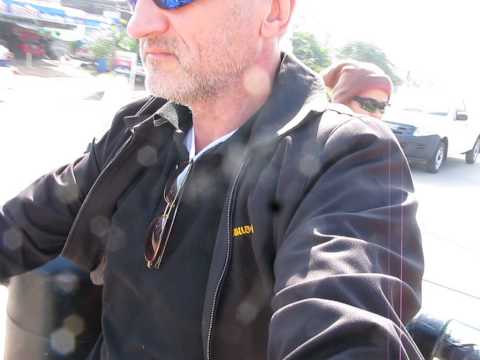 Koen Van Looken, in the video below: 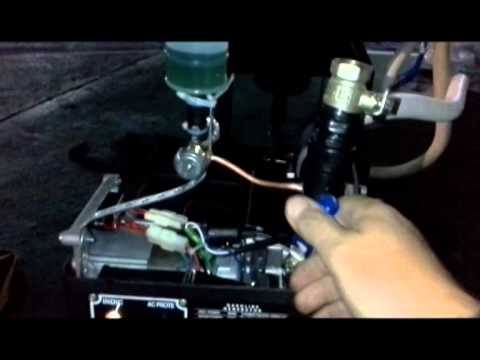 about 35 seconds you are opening a gate valve to show the glowing char inside the reactor. Then you close the gate valve, and adjust the wood gas carb valve to be more open. Why don’t you leave the gate valve open while running the motor?
Also, did you say that you are getting the rated power on woodgas with burning plastic smoke + two stroke oil as the same generator gets on gasoline? (My latest test with a 4 stroke generator-inverter would only load to 50% of continuous rated power on gasoline.) Thanks for the videos. Ray

The gate valve is only for lightning the reactor or playing around with temperature inside the reactor.
The actual intake nozzle is at the bottom from the reactor, where it also gets fed in the plastic fumes

Also, did you say that you are getting the rated power on woodgas with burning plastic smoke + two stroke oil as the same generator gets on gasoline?

( this is confusing for me, i can not recollect saying something like that)
The plastic fumes , from the pyrolizing unit where mixed with incoming air in the gasifier and subsequently converted into “i don’t know yet gas”
The two stroke oil is dripped in to the intake manifold from the 2 stroke engine (oil lube for the engine)
As i strip the carburators and work on the intake from the gas-mixture, i might obtain a better % then 50% of the rated power.

Hello Koen… the exaust gas produced are recycled back into the reactor or sended in atmosphere as normal usage?

Hello Koen…
the exaust gas are recycled into reactor or sended in atmosphere?

Sincerely I don’t understand WHY all thermal energy produced from combustion and all molecules contained inside are lost in atmosphere instead to be recycled inside the reactor again and again in the time. If you connect your reactor directly to the exaust gas port you can use thermal energy of gas for increase internal temperature and for make an best cracking of CO2 and H2O molecules… If externally you cover your reactor with the ceramic or other material you stop the thermal dissipation. If your reactor tube is made from austenitic stainless steel you have also an catalyst (nickel) that increase the reaction… As starter for charcoal ignition I suggest one or more glow plugs laterally to the reactor connected to the onboard battery 12v. That’s all!!

I tried a glow plug it worked fine but they are much more expensive, Add unnecessary complexity, are less available to everyone, and most importantly slower then a torch. Marco I would love to try some of your ideas but whenever you post, all I see is many many dollar signs appear!!!

Hello David, you buy glow plugs just one time not every day… you can spent a few of dollars

Marco isn’t that what is being done on the Gilmore where he recirculates the exhaust gas to “cool” the oxidizing charcoal. Yours is drawn upside down from Mr Gilmore’s. He draws the air/exhaust in from the bottom and it cools going up through the char and the gas is tapped off from the top.TomC

HI Tom… I’m writing just in Koen thread … no time for see another thread… However no need air for mantain red the charcoal but is ok the heat contained inside the exaust gas. I suggest to load and start with wood pellet inside the reactor instead of charcoal… you obtain an triple calorific power … In exaust gas output is present an throttle … you must close this throttle when you want more power and sent more exaust gas into the reactor.

Hi Wayne… Please use these glow plugs NGK Y-534J N°36… been tested with automatic current limitation , need to be cooled externally with an little amount of air in presence of more heat, an little PC Fan 12v is ok… I use also this power supply but also an 12V battery is ok, you can decrease the voltage to 11.5-11.6V using the trimmer onboard (variable resistor). With this power supply you can power three glow plugs togheter without problems. See photos attached…

Marco If you put air ( N, O2) into the hot charcoal, the reaction is N, and CO. Exothermic.

If you put exhaust gases ( N, CO2 ) into the hot charcoal, the reaction is N and CO . Endothermic.

Tom… normally yes but you forget one important thing.
We are talking of exaust gas thermally heated … in fact you has CO2 + H2O heated to high temperature…
You can test simply what really appear if you send the heated exaust gas on biomass…
You start an cracking process and an generation of syngas!!!