I had this hopper that I used to use for placing concrete with my skid steer. It has a slide gate at the bottom with a lever for dumping. After looking at the angled sides I thought this would work good for a charcoal maker so I revised it a little and made a quick stand for it and made a couple of batches of twig charcoal with it. Using twigs and small branches is a little more work up front but eliminates the dirty dusty work of grinding bigger chunks to size plus converting brush to charcoal doesn’t make me feel as bad wasting the heat. just a quick screening after the char is cooled overnight in an airtight barrel is all it takes to get engine sized charcoal. It averaged 9 gallons an hour of charcoal and about 2 gallons of biochar/ash after screening. 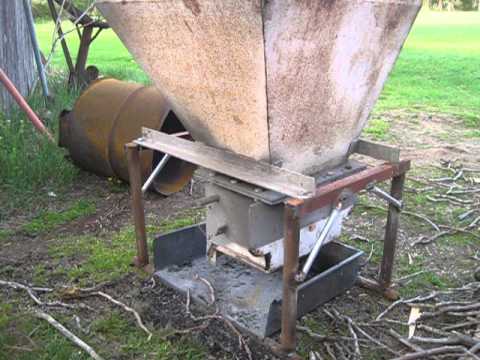 twig charcoal.jpg1200×675 410 KB
Very little smoke is produced with this tapered container. I could run this all day if I wanted to by dumping out of the bottom occasionally and shoveling the char into an airtight barrel. The one downside of this method is that I think to work properly it has to be continually fed a little at a time.
9 Likes
Carl (Carl Zinn (Amity, AR)) May 8, 2015, 3:03pm #2

Very ingenious Don. In the top, out the bottom.You continue to amaze me. Good luck on the tractor.

I agree with Carl— so very ingenious. Last year when burning the barn wood, we always had some tree/brush trimmings that were put into the fire. And as working the coals to get charcoal, I have observed that the branches do come out like “pellets”. I have seen a write up on making charcoal in a “cone”. I guess any inverted perimed would burn with out much smoke. Good find.TomC

Thanks Carl and Tom. Here is a picture of what the finished charcoal looks like after only one screening. Thats some nice size char, looks about right for bottom half i think, Thats another 10 gallons of deisel that dident have too be spent depleteing are fuel supply, while useing otherwize waisted wood,and cleaning the air with the rest of the lumber that came from trees that were other wize would not even been planted.That it a double saveings on green house gas.The fresh air from trees regrowing,and oil that was saved for future use.Not too mention the jobs that would be created useing our non planted land ,growing wild flowers from gov,paid.stand still land.

It is a great idea! It makes me wonder if it could be more continuous if was like a funnel shape with a stem then cooling fins on the stem part and possibly airlocks between the funnel and stem so it gets a chance to cool. It is probably not worth it to try though. Try something like the WK gasifier, just the fire tube section, with a shroud to concentrate and flare the gas instead of cleaning, cooling, and “popping” the gas in an engine.

Give it enough depth below for the slipped char to cool before removal.

Thank Joel S for the design. So simple that the only additional requirement to truly enjoy the process is a pretty gal to shovel “fuel” in the top and auger out cool char from the bottom, into a wheelbarrow ;~)

If you only see one image, I will try to upload the second image with more details in a second post. I am new user and only allowed one pic per post.

4 Likes
Making Charcoal without Smoke
What to expect driving through the city
freedombiomass (Doug Brethower) May 13, 2015, 3:48am #8 Hi Doug do you have any details on the auger? Was hoping for some in the book but no such luck. Will propably make one just looking for more detailing…

Here is a little better explanation of how I make engine charcoal fuel out of twigs and brush that otherwise often goes to waste. 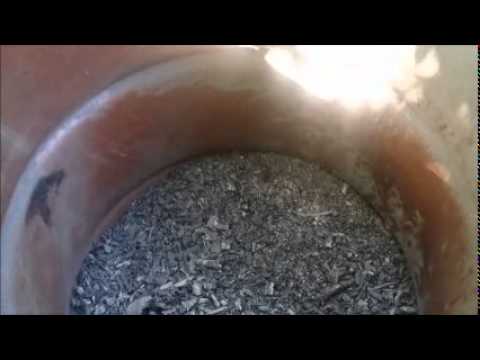 Good video Don. You are really getting into this charcoal business. You make it look easy with out grinding. I have all that charcoal I saved from burning part of my barn but that has nails in it and big chunks that have to be ground, besides the sifting. I have a welder / generator 1/2 converted to charcoal, but it is taking a back seat to my truck.TomC

Don, this is really good. Outstanding! I have been doing almost the same thing using the two barrel system, except I have to bring the small branches to my charcoal making area. (I like your three-point hitch idea.) I have welded rings to the outside of my wheelbarrow (The one with a solid thorn-proof tire), and stack it really high with thorny brush and push it to the barrel. Once the barrel is full of large junk wood in the 2" to 4" range, and has burnt for 90 minutes, I start throwing the brush into my chimney barrel, and after another 30 minutes, I can remove the top barrel and cover the lower barrel with a steel plate and some weights. The bottom barrel is in a 2’ deep hole in the ground, so I shovel in some dirt to cover the air holes at the bottom edge of it. I, too, screen first with 1/4" screen, and then with 1/8" hardware cloth on frames. I run the charcoal through the grinder later, and screen again. The stuff that falls through the 1/4" screen and not the 1/8" screen is saved separately. I’m getting quite a bit of it, and use it as gifts for relatives and gardening friends. Having the bottom barrel half way into the ground makes it easy to toss in thorny branches about 4 feet long. Once again, Good Job on the Cone Kiln/three point hitch charcoal maker and the video.

but that has nails in it and big chunks that have to be ground,

TomC, I have found that most large chunks made from hardwood are not really done on the inside, so If I can’t bust them up easily with my hands, they are considered to be “brands”, and go back into the next barrel load (near the end of the burn). I pick out the nails, spikes, hinges, etc, and sell them to the steel recycling outfit, along with my rusty fence wire and pieces of burnt out charcoal making barrels. The nails are easier to handle if they are inside of flattened tin cans. (We recycle everything…no garbage service.) I’m about to get more experience with barn wood, as Martin P recently delivered a flat bed trailer load of wood that used to be an old building. There are no heavy beams…just thin stuff, maybe old pine. I have a barrel loaded and ready to go, but we haven’t had any rain in over a month, and the fire hazard is too high to have an open fire. I may have to make up a second retort, load it, cover it, and wait for rain so I can run both of them at the same time. .

With my barn wood we stacked it in 6x6x6 ft. piles ( that is as large as the Dept Nat’l Res allows and of course I comply-- sort of) I burned the entire pile working it as it went. My last action is to rake down in the center of the pile to the ground. That assures that everything gets burned. When I get no more flames and just hot char, I put on a hoody jacket and welding gloves and shovel the hot coals into a 55 gal drum and cap it. It is fast but then the work begins. Haven’t started on that part yet. TomC

Great video Don. Do you have to cut the brush up a lot to get it in the burner? I wonder if one of those garden shredders would make it a shovel ready process.

Yes Carl, after the trees came down I used a hand pruner to lop off anything under 3/4 inch. That all went on those brush piles for charcoal and everything over 3/4 inch got cut up for the Tracker to eat. I have a small PTO chipper for my tractor and that would work OK too but I think this works better because the air can get around the twigs better for a faster and more complete burn.

Great idea - I have a ton of brush to burn around here. I have another question about using either unseasoned wood or pine to make charcoal. Does all the water (or pitch) burn off during the charcoal making process?

“Does all the water (or pitch) burn off during the charcoal making process?”

That’s the idea, because burning pitch is almost entirely tar, which can destroy an engine. Water just needs to be cooked off before the wood can heat up enough to turn to charcoal.

What BrianHWA said. You can use softwood or hardwood twigs. I use mostly soft wood cause that’s what I have. (hardwood is better-lasts longer in the hopper). Twigs dry faster than thick branches and cord wood but I try to charcoal them at least 30 days minimum in warm dry weather after the tree comes down and the leaves are dry and brown. You have to get used to looking at the brush piles a while. The nice thing about the open cone/tapered hopper is that the fire can be watched closely to make sure there are no yellow flames but only red coals before adding a lot of twigs or dumping charcoal.

Hi Don
Your open fire kiln intrigues me. I looked at the Kon Tiki Klin.
Dousing the coals with water, is this a good practice if you want to use the char for a charcoal gasifier?