Ok I purchase two almost identical 89 S-10 2wd trucks. Both are southern trucks with zero rust, both are going to undergo restoration and both will receive vortec V8 chevy engines. I am planning to build both identical in paint scheme, interiors and trim. However, one will become a street rod the the other is going to get converted to 4x4 with a solid front axle and early 90’s toyota drive train. I think the 4x4 is the one that will get the wood gas system, the two wheel drive we will double as our shop truck so we will need the bed space on it. So Im returning to my roots, built lots 4x4 trucks in my day and two V8 swaps in the small compact trucks. This of coarse is my personal project so it will not be fast at all. My stuff always takes a backseat to everything, but I will post my progress as we go. 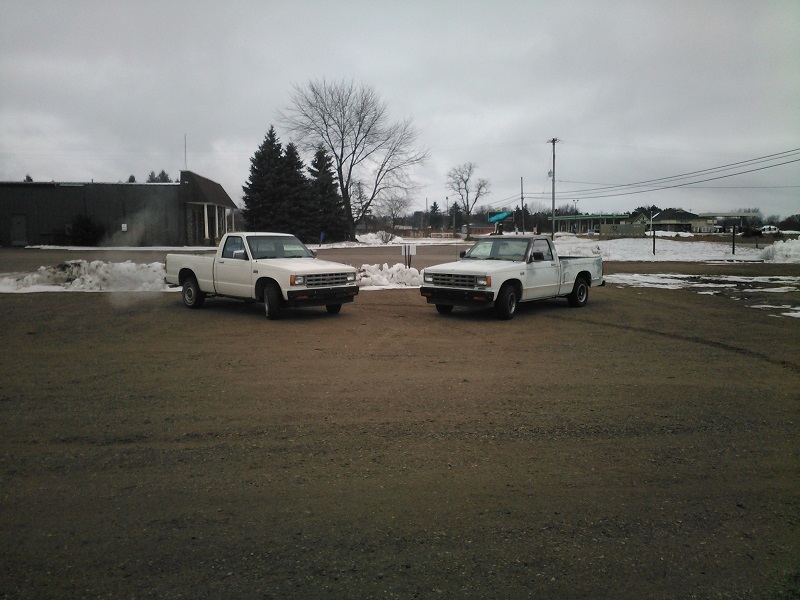 Haha, Ill keep that in mind when do the exhaust routing.

I hope I can keep the drive shafts under this one. The Toyota drive train is pretty bullet proof, Im retaining the 5 speed this is the only week link but if you keep tire size down the 31’s it will hold up just fine. Yeah they are a blast when you can drop shift at 35 mph and put em side ways.

Great project! please take lots of pictures, really interested in seeing you install the v8 vortec. What year of engine are you using? truck or vette? will be interested in the wiring aspect of the build

This will be the 96 and up 5.7 vortec converted to HEI distributor and carb intake with a mild cam swap. Should be good for 350+ HP only wire needed is ignition wire to the distributor and typical wiring for starter, alt, etc. It wont matter to me what version vortec I get; either version is fine.for what I want to do. No plans to add any cam lift to the heads.The LS Vortec can be done but not very easily, The oil pan is the issue; special modding needs to be done to the front cross member of the chassis to make it fit. Fly wheels also need spacers for mating it up to older transmissions. If you could find a Camaro LS engine complete with 6 speed that would be the way to go. You would then get an aftermarket carb intake and the MSD ignition for it. Its then all plug and play and is as simple as the good ol days. The MSD box for the LS engine is really slick. However I no longer endorse wood gassing any LS engine. They are interference engines if the valves become sticky from wood gassing you will smash the valves.

Also I had a GM engineer at the shop not too long ago. He gave some valuable input regarding NG converted vortec motors. This is lab tested info regarding gaseous fuels. He said we should be using the HD truck version with the hardened valve seats.

Advanced Adapters out of California makes direct swap bell housings for both the Toyota 5 speed and the stock S-10 5 speeds. Both trucks have the Iron Duke 2.5 ltr, I think these have the Buick 60* bell housing bolt pattern. So we will need to replace this bell housing with the 90* bell housing from Advanced Adaptors.There are tons of conversion kits for the motor mnts, Ill most likely just buy the kits for motor mounting instead of reinventing my own. For the radiator since these truck did come with the 4.3 you can just simply get an HD version and install it.You do need to install a short style water pump of the 60’s era to make room up there. I just look for an water pump for a 66 SS Chevy II or the equivalent and even then I think you do have to move the radiator into the support a bit. The only real issue is the exhaust you need special headers and have to remove the steering colum to install the engine. Then thread the steering shaft threw the header after install. The 4x4 system will all be custom fab by us, many have done Blazer chassis swaps but they look hacked to me. This will look proportioned correctly with a true solid front axle 4x4 system.

5 posts were split to a new topic: LS engines on woodgas

Matt; Are you talking about an S10 truck body on a S10 Blazer looks hacked?? I would have thought that would be a natural.TomC

Just a personal preference thing. The wheels need to be under the truck not sticking outside haha. This will get a 4" lift with prolly 31’s under it, It should have a good looking stance once complete. Ill try and keep it under the speed limits, maybe a little burny here in there

Edit: I missed the S10, part of your post, Im building a Solid Front Axle truck, No S-10 was ever produced with a SFA. So a popular swap is simply putting it on a full size blazer frame with the SFA. Sort of defeating my purpose putting this on another S-10 frame.

Last time i spun my wheels,it was in a 711 parking lot and ended up with a reckless driveing ticket.coarse that was 35 years ago,it should be off my record in 7 years unless it would have been alcohal related,never leaves the record books.Good luck with the wood gas truck,it will be nice too have ready too use.

Matt, I read the small engine threads and the Vulcan threads and have one question. What is the verdict on using the RV sliding valves in a gasifier. My tentative plan is to make the vertical stack of blowers with the RV valve at the bottom of the stack to shut off all flow after the blowers are shut down. I also have a 3 in. copper ball valve that I got for $4 that I can use. Any recommendations?
Dan

I never ended up trying the RV gate valves. I don’t remember why we had abandoned them. For just flaring out the blower or a means of just shutting off and opening gas flows, there is nothing wrong with the PVC ball valves. For metering however, we ended up just sticking to good ol brass ball valves, couldn’t come with a better mouse trap on that one. Especially now that we have developed the electronic ones. We simply loosen them up and the servo controls them very accurately.

What kind of motors in the s10 trucks,are you changeing the rear axels.I am thinking of puting ford 9" axel in mine if needed for gearing change since i have a few too use.

Im putting Vortec 5.7’s in them. The street truck Im retaining the stock 5 speed and the rest back. No need to change anything its good enough stock. The other one that is getting the Toyota drive train is getting the Toyota rear axle. If you can find one them this would be a better choice than the Ford 9" as they are already to size of the truck and most are stock with 4:10 gearing. They are made the same way the Ford 9" is made with the drop in punkin.

Ok thanks Matt Thanks,i may have a toyota out of old 1975 truck i junked when motor went too fouling spark plugs,I know they look about the same type,easy gear change.The salvage yard guy over hear has ford 9" or probbly toyota axels for it was 150 each.at barnum’s junk yard millington,mi

Hey does he have a front axle complete. Im looking for a complete assembly with rotors brake calipers and leaf springs. If you come across one I let me know.

Not sure what you looking for but i bet he does,ask for the owner or when he is there,i dont know the new guy working there much yet.his phone is 989 871 4000.Are you looking for 4/4 s10 front axel,i am slow seeing what you are building.

Im looking for a 79 to 85 Toyota front solid axle. The S10 was never built with a solid front axle, they only came with Independant front suspension from the very beginning. The Toyota truck solid front axle will match the rear axle of the donor truck I’m using for the 4x4 swap. The Toyota drive trains are built like tanks and are well designed and since I have one with a rotted out frame with a good working 4x4 system Im going to put it to good use. On the 2x4 build its not a big deal shoehorning in the V8 as this will be on the street turning smaller tires. What Id really like to find is a Cadillac rwd 3.6 lte with 6 speed to shove in the 2wd. It will have comparable power and get a lot better fuel mileage.

I have a 2 wheel drive toyota front frame stub in good shape, 6-1/2"past the transmission crossover bracket-torsion bar suspension,i cut off too save the rear frame for trailer,Or are you looking for the toyota 4/4 front stub? OK i see your looking for just the 4/4 front axel.If you need the 2/4 frame front stub let me know, you can have it. it will soon have the motor out,if the flood waters dont rise.

We could pick up some tractor tubes and float over lake MI, and go get MIKE L cati,That would be neat too have a s10 front wheel drive 6 cyl,They all like there fuel though, 12 too 22 MPG anyway, rear wheel drive is better for trucks when loaded for a trip in winter time,or with front wheel drive the drive wheels get light,or loose there traction,when the weight is in the back of wagon or bed of truck.I should have saved the wiring harnus out of my astro van,it got 17 mpg every time,that would be plenty of power for wood gas s10.and not bad on gas when out of wood.