Ok im not going to make any claim to fame because i dont know what @KristijanL record is, but i think i just found the fastest way possible to make a heat exchanger. Piece of outside pipe whatever diameter you like im using 5" exhaust pipe here 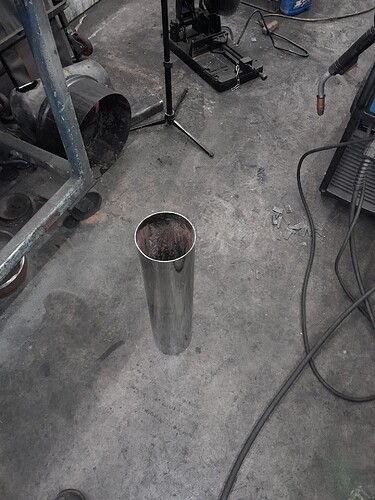 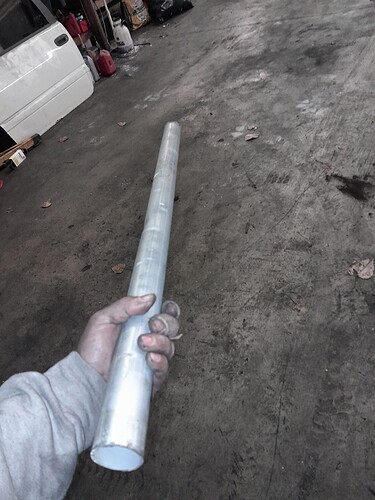 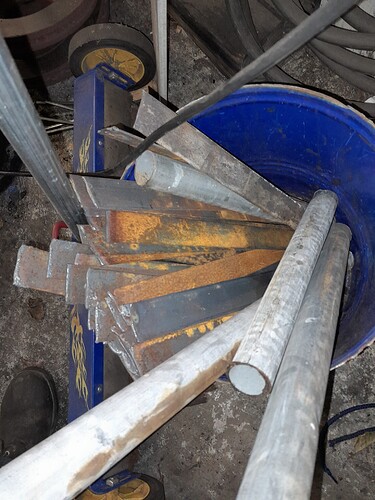 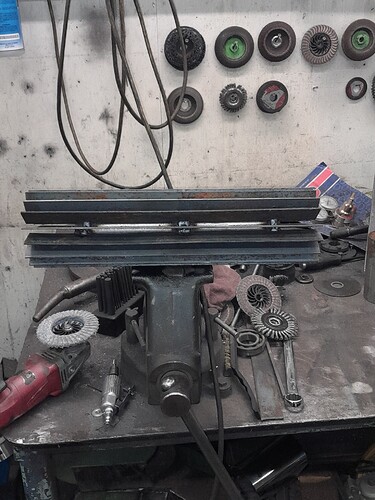 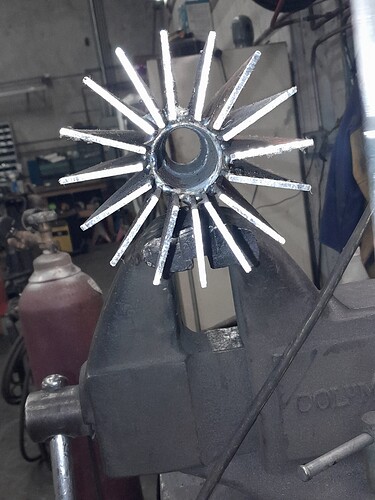 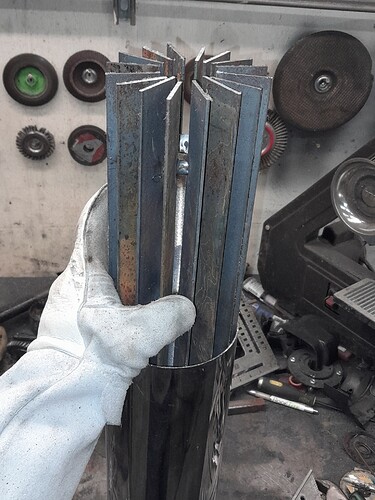 Marcus, if you allow me one thought, regarding the heat exchanger, … Two media that exchange temperature should both act on the same large surface with their heat, this is how it would theoretically look… 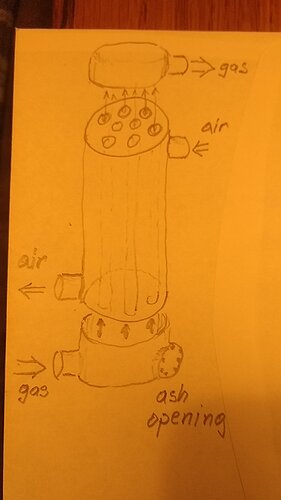 Well, if I added spirals in the pipe, as modern boilers use, the exchange would be even better and it would be possible to clean soot and ash right from the outside. Let me add that it would be good to direct the air below to the middle, in WK style, just like you have now. Its amazing how your brain works Tone, my brain looks at a thing and looks for the simple solution in time expedient building method. Yours looks at theory, digest it piece by piece and begins redesigning the world to fit the theory. You really are a out of the box thinker. Very remarkable

Marcus, I have a “professional deformation”

in my head,… 30 years of work in the energy industry,… well, in all processes I am looking for an optimal solution,… the transfer of heat through a material is determined by the type of material, thickness and surface, with the surface can be somewhat cheated by turbulent media flows. Maybe another option, there are thin-walled flexible stainless steel tubes that you can easily twist and insert into the housing,… 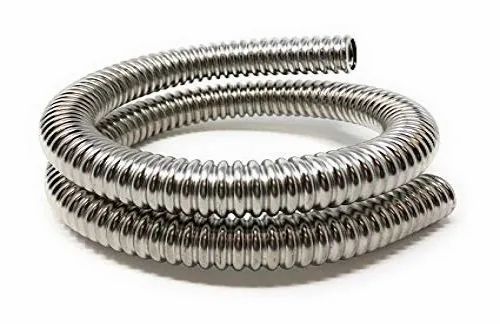 I was thinking about drilling lots of 1/4"holes in the center pipe and welding short (2") pieces of threaded rod in each hole with 1/2 of it in the tube and half of it out. You would gain a lot of surface area with the threads, yet have the solid core for the heat to transfer through. What do you guys think?

Hi Garry, your idea is not bad, the surface area of ​​the pipe is increased on both sides and you also get quite a bit of turbulence, which is good for heat transfer. Let me add that the gases are the hottest (probably 1000°C here), when they leave the hot zone, you can see the pictures how the grids are deformed and when they travel through the ash space to the heat exchanger, they lose a lot of temperature, thus entering the heat exchanger with a temperature of around 500°C, an ideal heat exchanger will thus preheat the air to this temperature. I have integrated a heat exchanger in the form of a vertical grid, where the exchange takes place at as high a temperature as possible and here the air is preheated to extreme values, at least that’s how I imagine it.

I remember someone on this site took 2 pipes and cut long cuts down the pipe but not to the ends then slipped flat stock pieces into the 4"pipe. The flat sock was 4" wide and was protruding out 2" weld it all up, the air was preheated going through the pipe inside the drop box. I think he had two of them in his drop box. Mine is just one bigger pipe.
Bob 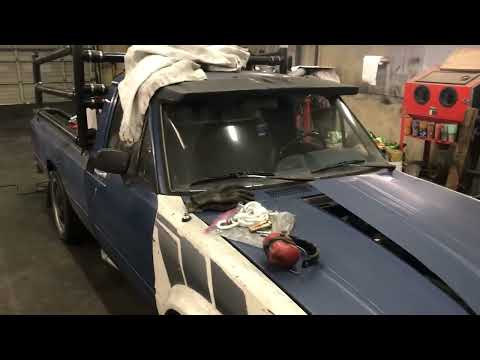 A lot of information in not a lot of time Marcus. That’s why I appreciate you. I’ve been watching Uncle Tony’s series on rebuilding a Jeep engine. I think it took the same amount of time for him to do nothing but pull six piston/rod assemblies out of the engine. Blah Blah Blah.

I have been watching that too, he is really moving snails pace for the new guys there haha did you see his video yesterday talking about intake pulses? I just watched garage54 video on it, very interesting

Little good news, the toyota is fully assembled and other then dialing in the timing is pretty much ready to fire off again after her near 4 month slumber during tear down rebuild and engine swap 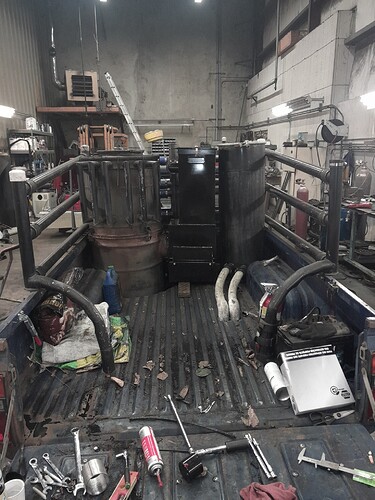 But a little bad news to go with it, my shop door at work has been broken and inop for 2 weeks now and it broke while my service truck was outside and the toyota inside. The shop is not in a very good area of the city break ins and thefts are fairly regular so under no circumstances was i going to leave my service truck outside full of all my tools that i make a living with.

Have been commuting to work on the companys fuel in it which saves on the woodpile while the dodge is parked here at work. Since a while back when the rocker arm bolt broke off and i repaired it i have had a minor missfire at low idle and it progressivley has gotten worse, coupled with a failing ecm that is intermittently throwing codes for vehicle speed sesor which disables the cruise control and causes an eradic idle quality. Then intermittent killing of power to the front coil pack which kills 4 cylinders at once, not good!

Last night i fired it up to move it over a little for another truck i was working on and it sure sounds like it snapped another rocker bolt, clangy clang in the valve cover again and another dead cylinder.

In what i am not proud to say was a fit of rage i went to ripping the spare v10 out of the green parts truck, bound and determined to have it out before i went home for the day. Hour later it come out kicking and screaming. I manged to break a valve cover and dent the oil pan pretty good when it came out at a higher velocity then i wanted 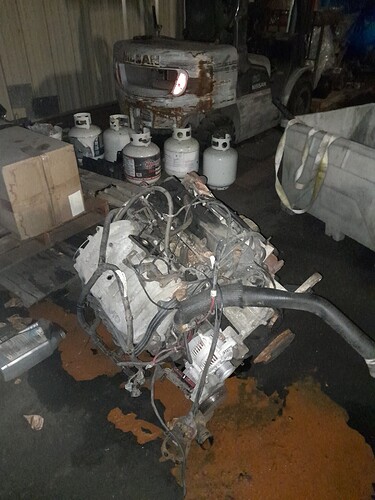 A few thoughts at this time, i found out the rocker bolt was such a problem, that in 2001 the v10 was upgraded from 5/16 rocker bolts to 3/8. Problem enough for the manufacture to fix it means this is not a uncommon thing.

Problem 2, the root cause of the bolt failing was a lack of maintenance and a design flaw that the lifters can and while sludge internally causing a over travel of the pushrod, weak link is either the bolt or the pushrod one is bound to give way. It appears the marvel mystery motor oil i put in cannot clear the lifters of their sludge up circumstances.

So the motor currently in the truck needs torn down lifters removed disassembled and cleaned out. Thats a pile of work in the truck, and does nothing for cleaning out the rest of the engine of sludge which when i had it apart the first time i found plenty of it in the heads. This will be a recurring problem with this engine unfortunately. That leaves me with dropping in the spare mill.

Only difference between the 2 engines is 94 has a egr valve 96 does not, cam and crank sensors are obd2 specific while the 94 are obd1 specific. Since the ecm is dead already and i have done a pretty thorough search and they are not available that means this truck will end up with the 94 engine and harness, converting it back to obd1, not tunable.

Starting to regret not swapping the engines when i first got the truck and it was just a couple bolts to pull it out with how dismantled the truck already was.

Its a tight fit to get the motor in and out, much much tighter then most. Dodge recommends removing the core support and unbolting the cab and tilting it back to gain enough clearance. Also annoyingly i discovered there are no lifting hooks of any kind on the v10 and not a lot of good places to get a chain on it that will balance well, hence breaking things while pulling it out. Got some work ahead of me

Sorry to here this Marcus, but we now know the truth about the newer V-10 engines, humm. I wonder what killed the V-10 production line, I think you found one of the answers. Dodge tried to save some monies on smaller bolts and cheapen up the great V-10 from what it use to be in the earlier days. It seems Dodge just keeps shooting it self in the foot over and over and over again. Just like when they stopped making the 440 engine that was a great big mistake.
Bob

What does not tuneable mean? Does it mean you can’t do the laptop hocus pocus? This is my whole problem with modern engines. Kill the brain and the body dies and even if it’s on life support, there is no real way to DIY cure it. Why shouldn’t an ECM be the same for every engine? That makes no sense to me.

Marcus, you’re lucky to still be young and full if energy. I’m very impressed by your persistence.

JO, we who are older and lazier, have to work a little more thoughtfully so that there are not so many repairs

Many computers are the same, its what they are programmed to do and when, under what conditions with what applicatiin. For instance 96 and newer dodge no matter what vehicle a neon, pt cruiser, half ton pickup, v8, 4cylinder, v10 ect all used the same computer. But each one is programmed to a specific vehicle, coded to the vin number with each option of that vehicle. This was a kind of dodge specific thing, their computers was called a “pcm” powertrain control module it controlled engine, transmission, t case sometimes, emmisions system all of it in one computer. Most other manufactures had a “ecm” engine control module, coupled to a bcm body control module, to also a tcm transmission control mondule, abscm antilock braking control module, gem general emmisions module. You see how stacking system upon one another each looking for specific messages voltages and signals from another miscommunication happens quick and often between that many computers jawwin at each other!
Im a very big fan of no computers, but i have learned to adapt.
At least now i will get to test my theory on obd1 vs obd2 woodgas comparision

Some called it persistence, but in may just be insanity. Repeating the same thing over and over expecting different results

Im a very big fan of no computers, but i have learned to adapt.

You probably don’t want another project, but suspect you would be the perfect guy to develop your own modules. Ever heard of Speeduino? Fear not to mess with electronics, it’s easier than you might think.
Rindert

Im actually extremely intimidated by that type of work, i can work on most things that control angry pixys but im a parts swapper when it cones down to it. Nevèr been able to fix a failed electronic component myself